Deception. Censorship. Suppression of dissent to hide the shortcomings of the state. HBO's five-part miniseries highlights exactly how a political structure explodes.

Acute radiation syndrome took a toll following the nuclear accident at Chernobyl, which was recently revisited in a haunting HBO miniseries. Photo: HBO

HBO’s five-part miniseries, Chernobyl, based on the meltdown at a nuclear power plant in Chernobyl in Soviet Ukraine in 1986 and its subsequent cleanup, has surged to the number one position on IMDB’s all time TV rankings. More so, it has renewed interest in the decades-old nuclear disaster and spawned a cottage industry of memes.

An absolutely compelling portrayal of the tragedy, Chernobyl is a radical departure from the days when Russians were typecast as one-dimensional villains in Hollywood productions.

Apart from sparking a resurgent debate on the merits and demerits of nuclear energy, the series has prompted a range of questions about how competently current leadership would deal with a disaster of a similar scale.

The opening seconds of the first episode itself plunges viewers into a scene of chaos: the nuclear plant workers are disoriented and confused – much like the audience – as they scramble to grasp the scale of the mishap.

From the very get-go, the state apparatus is involved in the obfuscation of information – from the masters of the control room to the local governing council in Pripyat. Local committee officials repeat the party line ad nauseam: “When people ask questions that are not in their own best interest, they should simply be told to keep their minds on their labour.”

As the true nature of the catastrophe dawns upon the inhabitants of Pripyat, writer Craig Mazin (whose most notable credits before Chernobyl are surprisingly the two sequels to the 2009 hit comedy The Hangover) and director Johan Renck bring to life the human cost of the disaster, neatly juxtaposed against a moribund economy and a callous bureaucracy.

In the hours after the disaster, Professor Valery Legasov, the Soviet Union nuclear physicist who led the commission investigating the disaster, is forced to team up with an unlikely companion – deputy chairman Boris Shcherbina – to confront the gargantuan task of cleaning up the radioactive fallout of the disaster.

Narrated in vignettes, Chernobyl traces the state of perpetual crisis that engulfed the country in the immediate aftermath of the meltdown. It uses Legasov to break down immensely dense subject matters into a lingua franca digestible to the viewers.

But the highest stature of valiance in Chernobyl is reserved for the unsung heroes: the firefighters, the coal miners who excavate the tunnel, the divers who drained the bubbler tanks underneath the reactor and the bio-robots – a highly euphemistic term for the brave men who cleared the radioactive debris above the reactor. 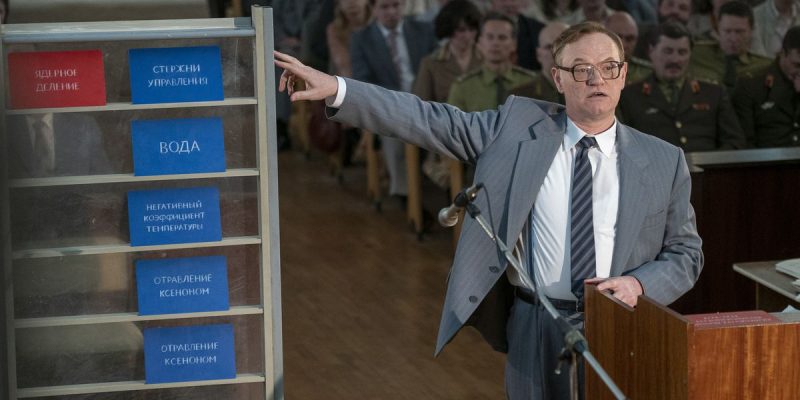 The series has attracted significant ire for deviating slightly from historical events and of getting “simplistic Hollywood treatment” by assuming artistic liberty to recount the story in five episodes.

From glorifying Legasov and fabricating Ulana Khomyuk’s character to represent the scientists who helped investigate the disaster to an oversimplified caricature of Anatoly Dyatlov as among the three men responsible to even the gratuitous usage of the word ‘comrade’ – there has been no dearth of criticism levelled against Chernobyl.

But Chernobyl isn’t just a historical retelling of an accident. The ordeal holds political resonance today. When societies embolden a culture that undermines truth, the dissemination of information and scientific facts, everyone loses. The meltdown at Chernobyl and its immediate aftermath laid bare the rotting edifice of an incompetent and unjust state on the cusp of perestroika.

HBO’s Chernobyl makes this amply clear: Soviet apparatchiks were more agitated about the global reaction to the accident and the reputation of the regime than the actual repercussions of the meltdown.

After all, the Soviet nuclear energy industry and nuclear arsenal were a source of great national pride and indeed the raison d’état of the state. Any account that contradicted or threatened this narrative was considered detrimental to the interests of the state.

The catastrophe at Chernobyl punctured this very nuclear pride.

One particular scene in Chernobyl shows a distraught Mikhail Gorbachev peering over foreign newspapers reporting pleas for help from Moscow. “Our power comes from the perception of our power,” he scoffs.

Of course, Gorbachev’s apprehension on the show is in perfect consonance with the address he delivered after the Soviets admitted that a meltdown had occurred at Chernobyl. In it, he took special care to lambast the “unrestrained anti-Soviet campaign” by the “mass media in certain NATO countries”. He claimed to have “faced a veritable mountain of lies” in an attempt to “defame the Soviet Union and its foreign policy”.

It would be naive to further assume that government control and vilification of the media were relics of the erstwhile Soviet Union. One of the first crises to beset the Soviet Union’s successor state of Russia under Vladimir Putin’s presidency was the sinking of nuclear powered Russian submarine Kursk in August 2000. It was PR disaster for the new president, but Putin refused to let the accident put a dampener on his vacation in the Black Sea and initially turned down offers of assistance from Britain and Norway before finally accepting their help after Russian rescue efforts failed.

Also read: When Chernobyl’s Radioactive Residues Were Thought to Be in Mumbai’s Butter

In all, 118 men aboard the submarine died but Putin trained his guns at the Russian media for being “liars” and “trying to discredit the country so that the army gets even worse”. Since then, Putin has kept a tight leash on the media and muzzled dissent within the country.

It is therefore no shock then that the pro-Kremlin media have struggled to reconcile with the outpouring of support and acclaim for the series and have sanctioned a more “patriotic” Russian remake – one where the CIA is culpable of sabotage at Chernobyl.

But its not just Russia, Chernobyl is an oddly prescient tale for our times, given how denial, subversion, lies and wanton disregard for scientific facts play a regular role in our societies.

The series is intended to be a cautionary tale with a universal message: an aura of fear and suppression of dissent with a callous indifference for expertise does not bode well for free societies. This is what happens when societies stop listening to reason – be that a straight up denial of the facts surrounding climate change or mysterious clouds that apparently provide cover from radar.

Ultimately, the fundamental takeaway of Chernobyl is summed up best by Legasov, when at the end of his fiery testimony, he concludes, “That is how an RBMK reactor core explodes: Lies.”

Lies. Censorship. Suppression of dissent to hide the shortcomings of the state – that is how a political structure explodes.