A glimpse into the lives of the maaldhari – the nomadic pastoralists of Kachchh who own herds of camels, goats, sheep, buffaloes and cows.

Jat Haseena walking with her herd of Kharai camels in search of water. Every year during the peak of summer, food and water are so scarce that the family changes their location almost every alternate day. Credit: Ritayan Mukherjee/PARI 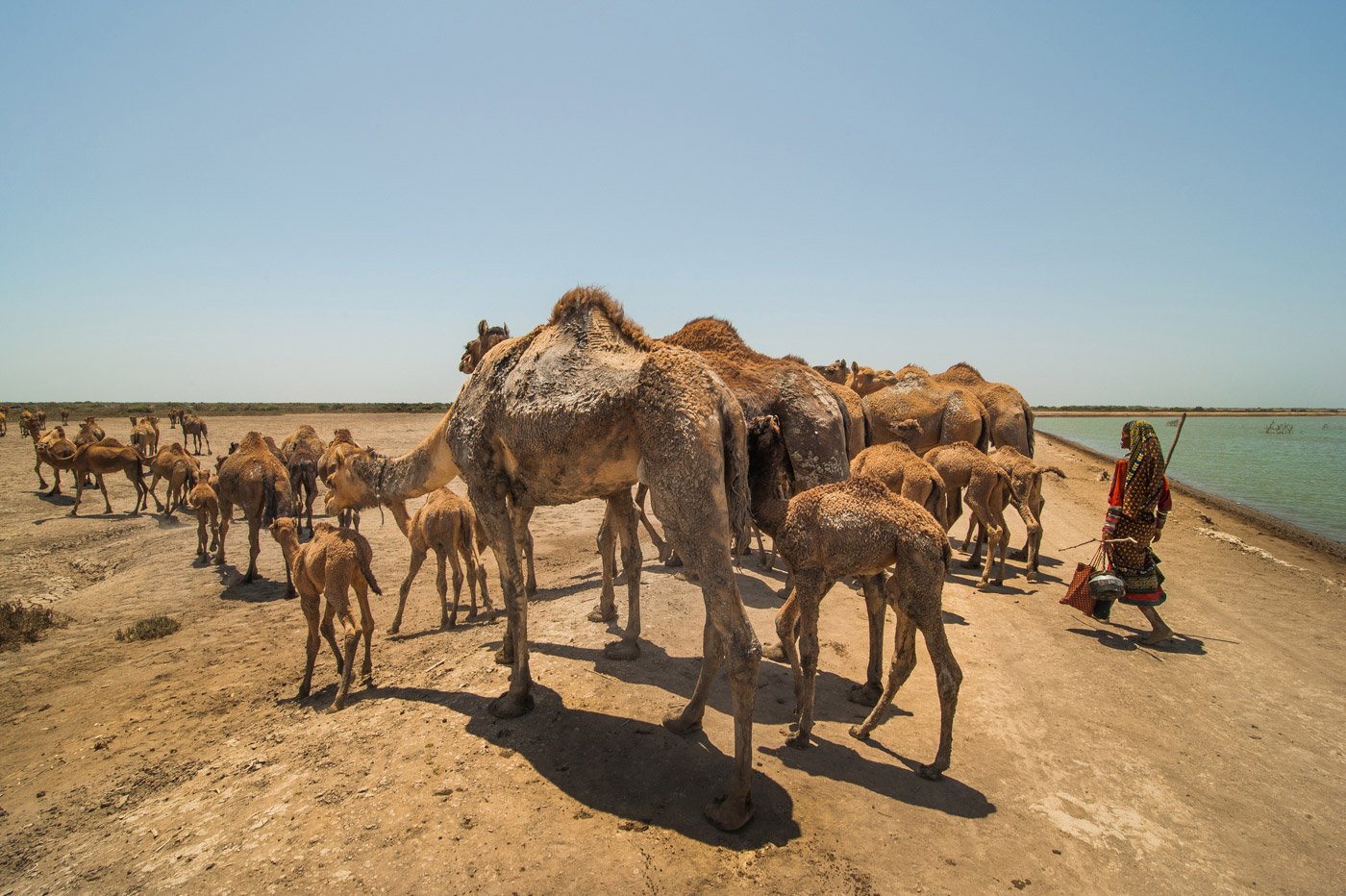 Jat Haseena walking with her herd of Kharai camels in search of water. Every year during the peak of summer, food and water are so scarce that the family changes their location almost every alternate day. Credit: Ritayan Mukherjee/PARI

Jat Ayub Ameen, like others in his community, says he is a satisfied person. “We don’t drink and are not greedy for other people’s property; we listen to our own voice, we walk to our own rhythm.”

I first met maaldhari like Jat Ayub on a dusty road outside Bhuj around two years ago. The maaldhari are nomadic pastoralists of Kachchh – in Gujarati, ‘maal’ refers to the animals (the word means ‘material’) and ‘dhari’ are the people who keep these animals. Their herds include camels, sheep, goats, buffalos and cows.

Many of the maaldhari communities migrate in March-April, just before the onset of summer, in search of green pastures. They return to their villages by July-August, when the monsoon starts. Their migration schedules vary according to the animals they keep. But they all live because they walk.

The major maaldhari communities of Kutch are the Jats, the Rabaris and the Sammas. They can be Hindu (Rabaris) or Muslim (Jats and Sammas), but all the communities share amiable ties and the same philosophies of nomadic life.

For me, photographing the distinctive maaldhari has been a challenge. Unlike high altitude pastoralists who have simple community structures, in Kachchh these structures are complex and take time to figure out – the Jats, for example, include four communities – Fakirani Jats, Hajiyani Jats, Daneta Jats and Garasiya Jats. A few of them settled a long time ago and keep cows and buffaloes. Only the Fakirani keep camels, are nomadic, and move throughout the year, usually within their taluka.

“Those who follow the path of Sant Savla Pir are known as Fakirani Jats,” says Aga Khan Savlani, an elderly spiritual teacher and highly respected Fakirani Jat. Savlani told me that in 1600 AD, Savla Pir gifted a camel to one Devidas Rabari – and this is how the Rabaris started keeping Kharai camels, who they value till today.

The Fakirani Jats are conservative and dislike cameras. Though they welcome visitors with tea made of camel milk, they resolutely refuse to be photographed at length. Most of the families I interacted with rejected my idea of documenting their daily life.

Then I met Jat Ayub Ameen, a Fakirani Jat from Bhachau taluka of Kachchh, a simple and humble man. He moves with his family, including his wife Khatoon and his sister Haseena, and a herd of camels. In early 2016, he let me into his life with my camera.

Though the Jat communities here primarily speak Kutchi, Ameen, around 55, speaks fluent Hindi, which he says he learnt by listening to the radio. Unlike many Fakirani Jats, Ameen and his family don’t live in pakkhas (temporary houses made of reed grass, jute, rope and wood). They sleep in the open, under the skies.

Though Fakirani Jats keep two breeds of camels, the Kharai and Kachchhi, Ayub only owns Kharai camels. And since mangrove plants are a critical part of the diet of these animals, he has to constantly look for grazing grounds. However, due to deforestation and industrialisation, especially along the coastal belt, mangroves have depleted in Abdasa, Lakhpat and Mundra, though in 1982 the forest department had declared these coastal areas a protected zone. Ayub also speaks of the spiralling growth of a plant called gando baavar (prosopis juliflora), which does not allow grasses and other plants that are best suited for the animals, to grow.

But despite these problems Ayub Ameen, like many of his community, says he is happy: “At the end of the day, we get roti and camel’s milk, we have that and go to sleep.”

A Fakirani Jat family on the move near the Chari-Dhand Wetland Conservation Reserve. These families, unlike some of the other maaldhari who are seasonal migrants, move constantly throughout the year, usually within Kachchh. Credit: Ritayan Mukherjee/PARI 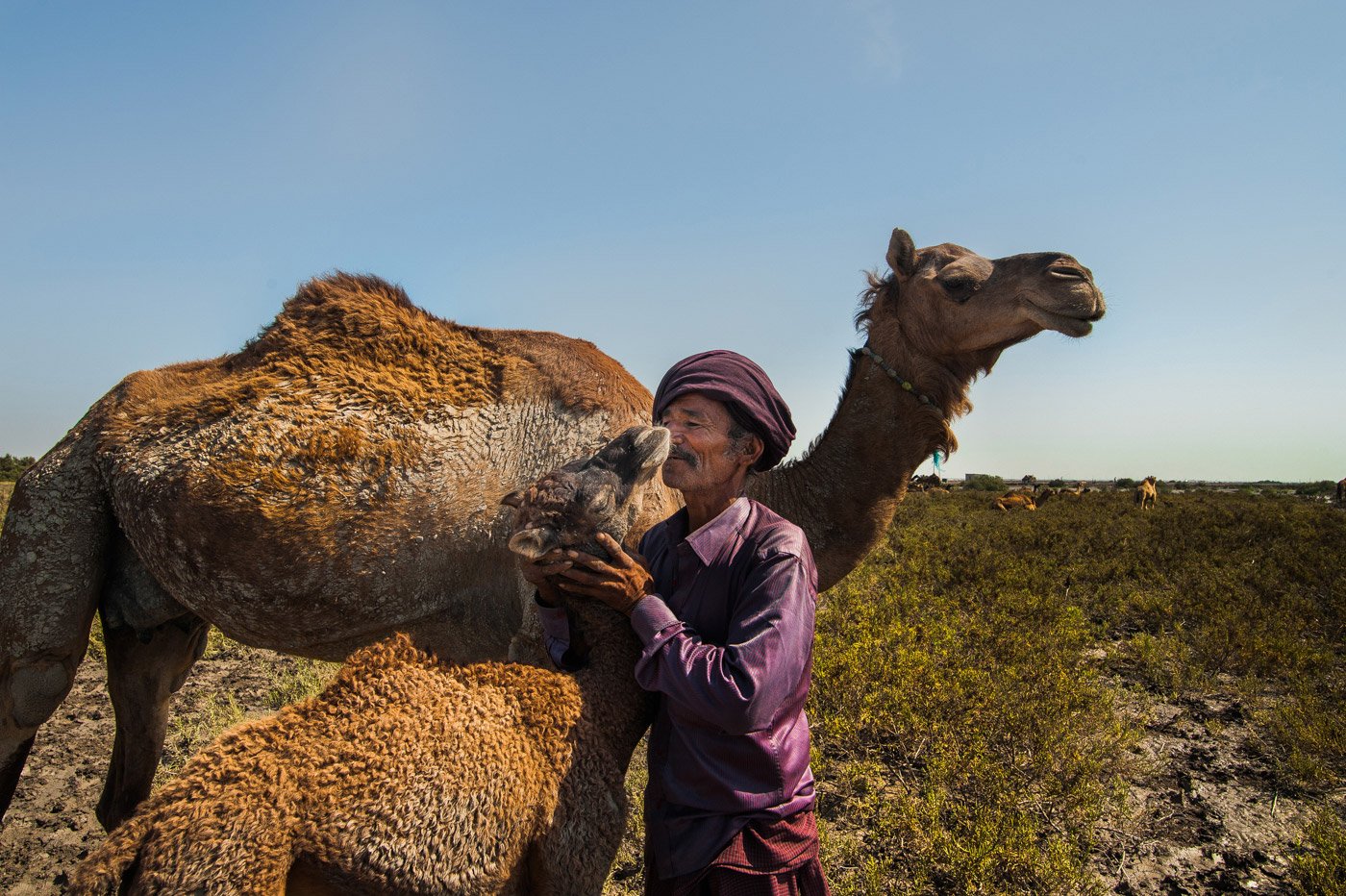 In Khari Rohar, Jat Ayub Ameen shares a moment of affection with a newborn Kharai camel. Ayub is from Bhachau taluka of Kachchh, and this year has around 100-110 camels. Credit: Ritayan Mukherjee/PARI 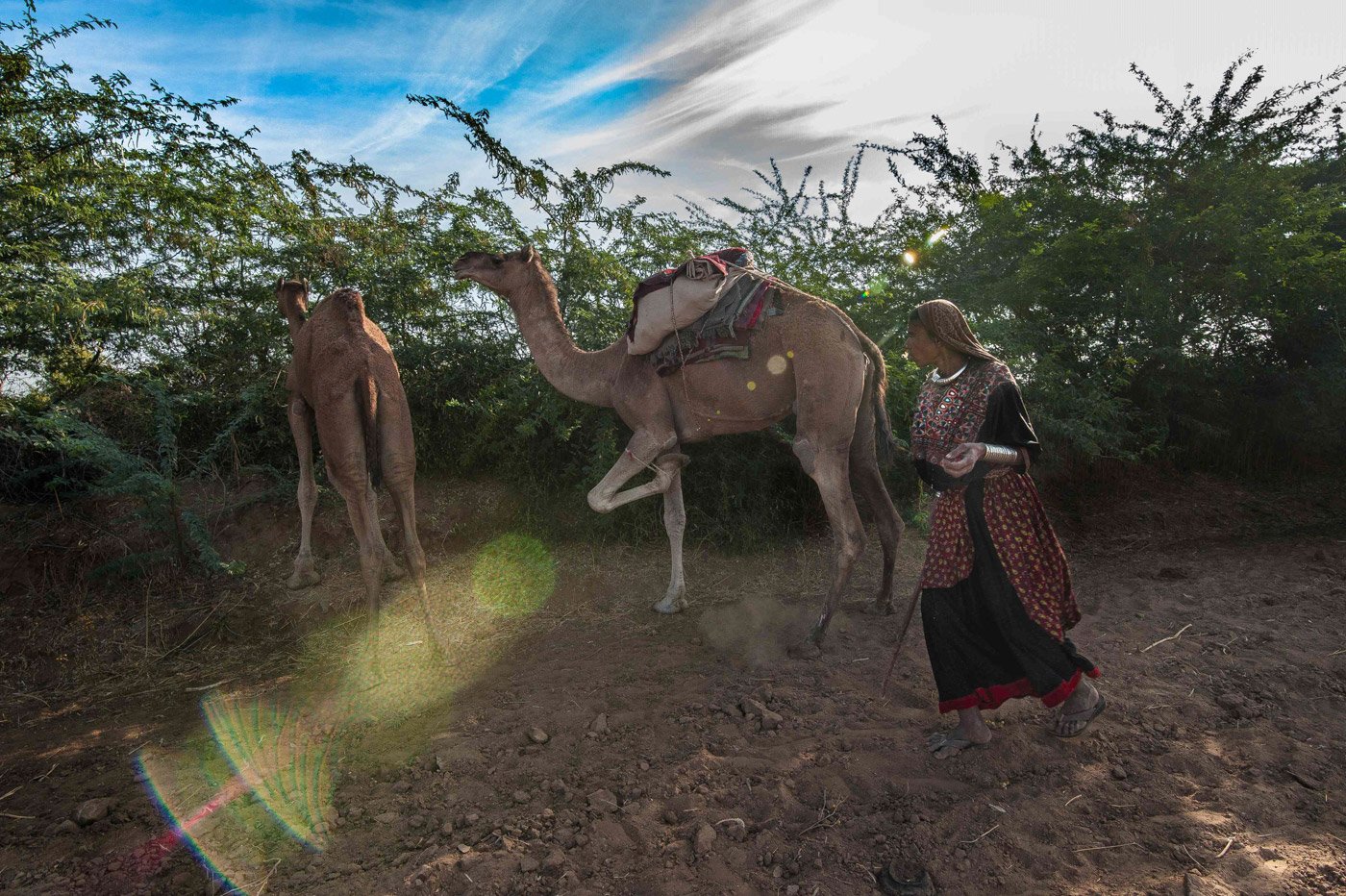 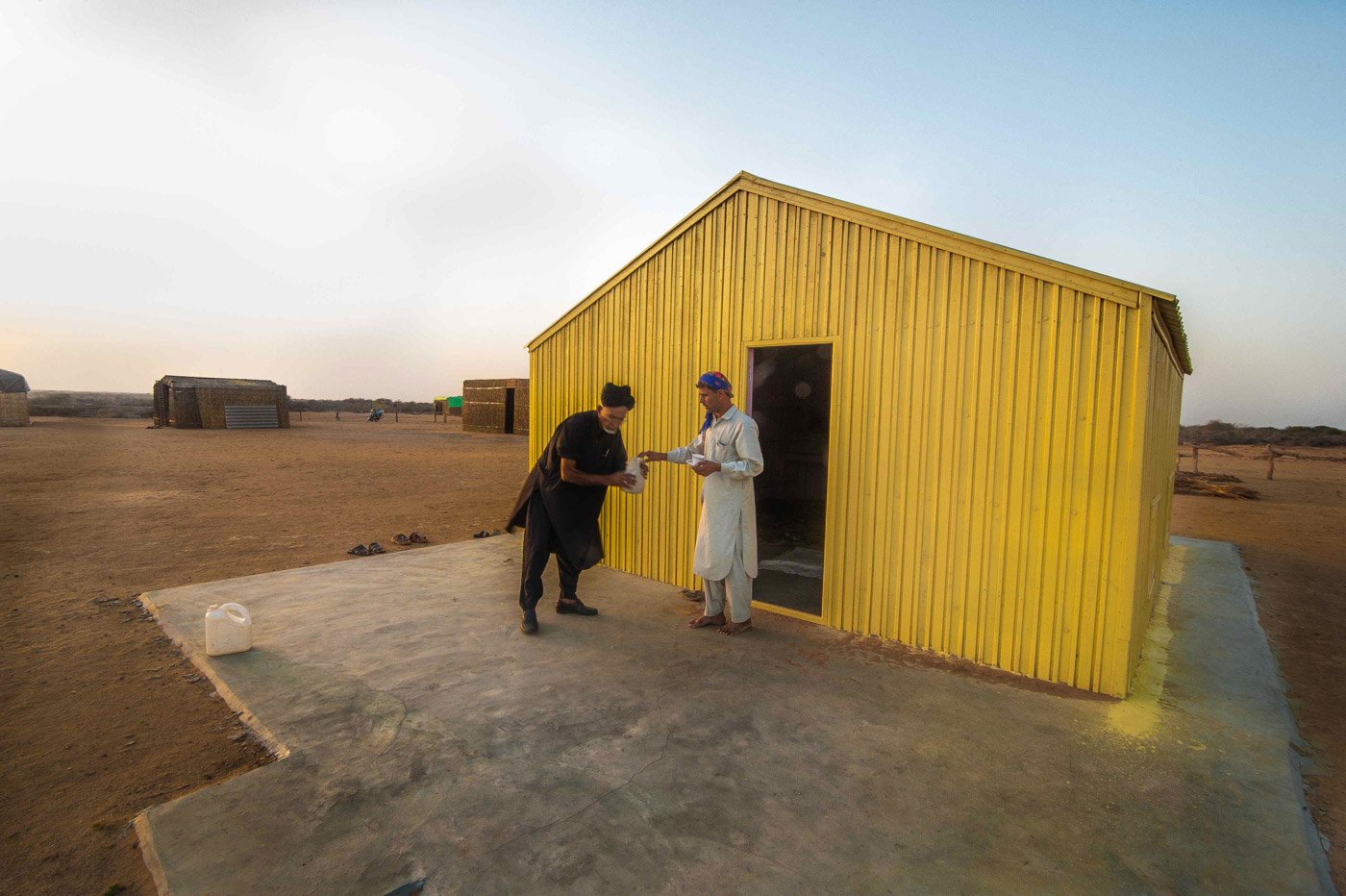 Aga Khan Savlani prepares for his namaz before sunset. Savlani is a spiritual teacher and respected elder of the Fakirani Jat community. He lives in Pipar village in Lakhpat taluka. Credit: Ritayan Mukherjee/PARI 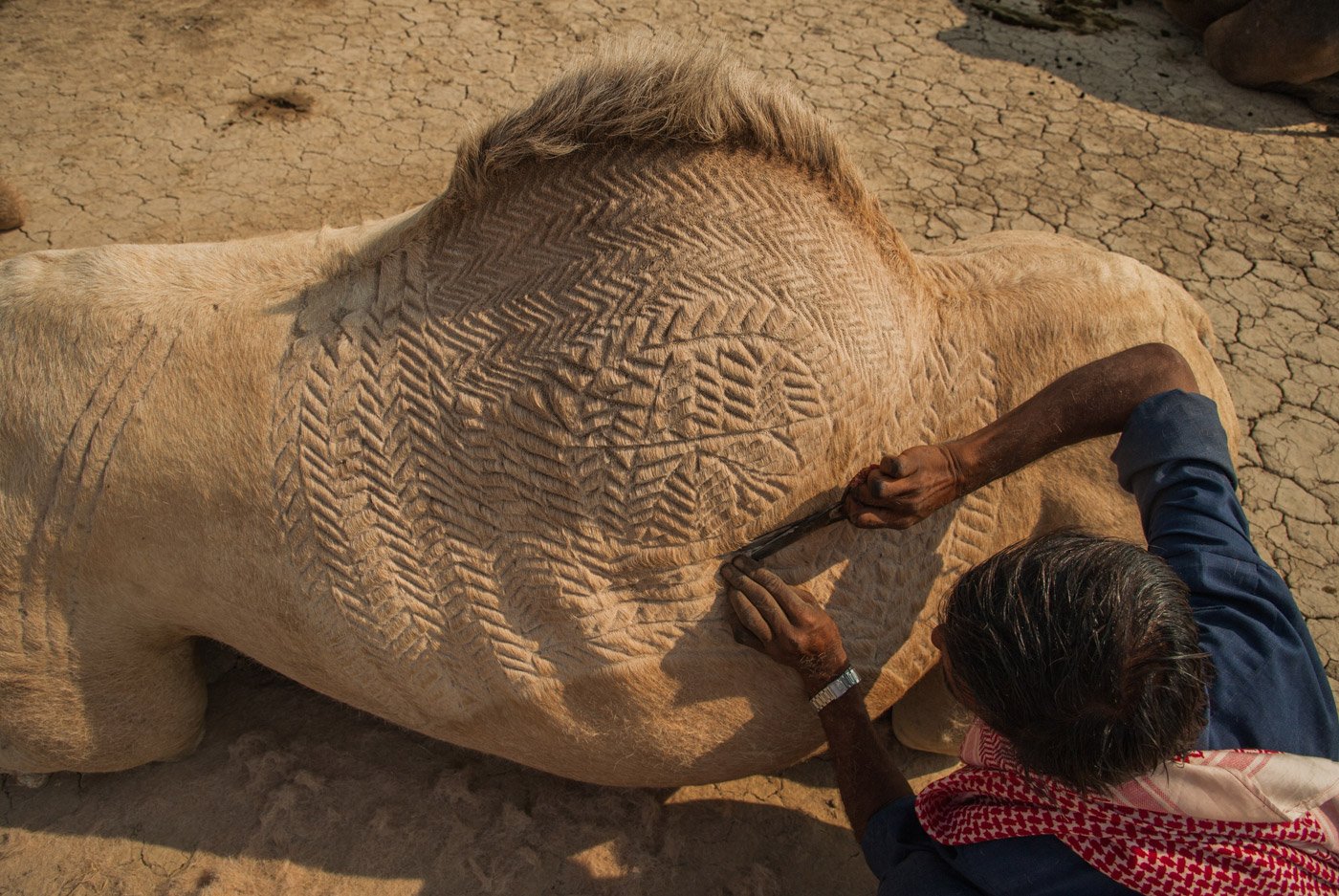 Camels are usually sheared once or twice a year just before the summer – the herders use scissors to do the elaborate shearing themselves. Credit: Ritayan Mukherjee/PARI 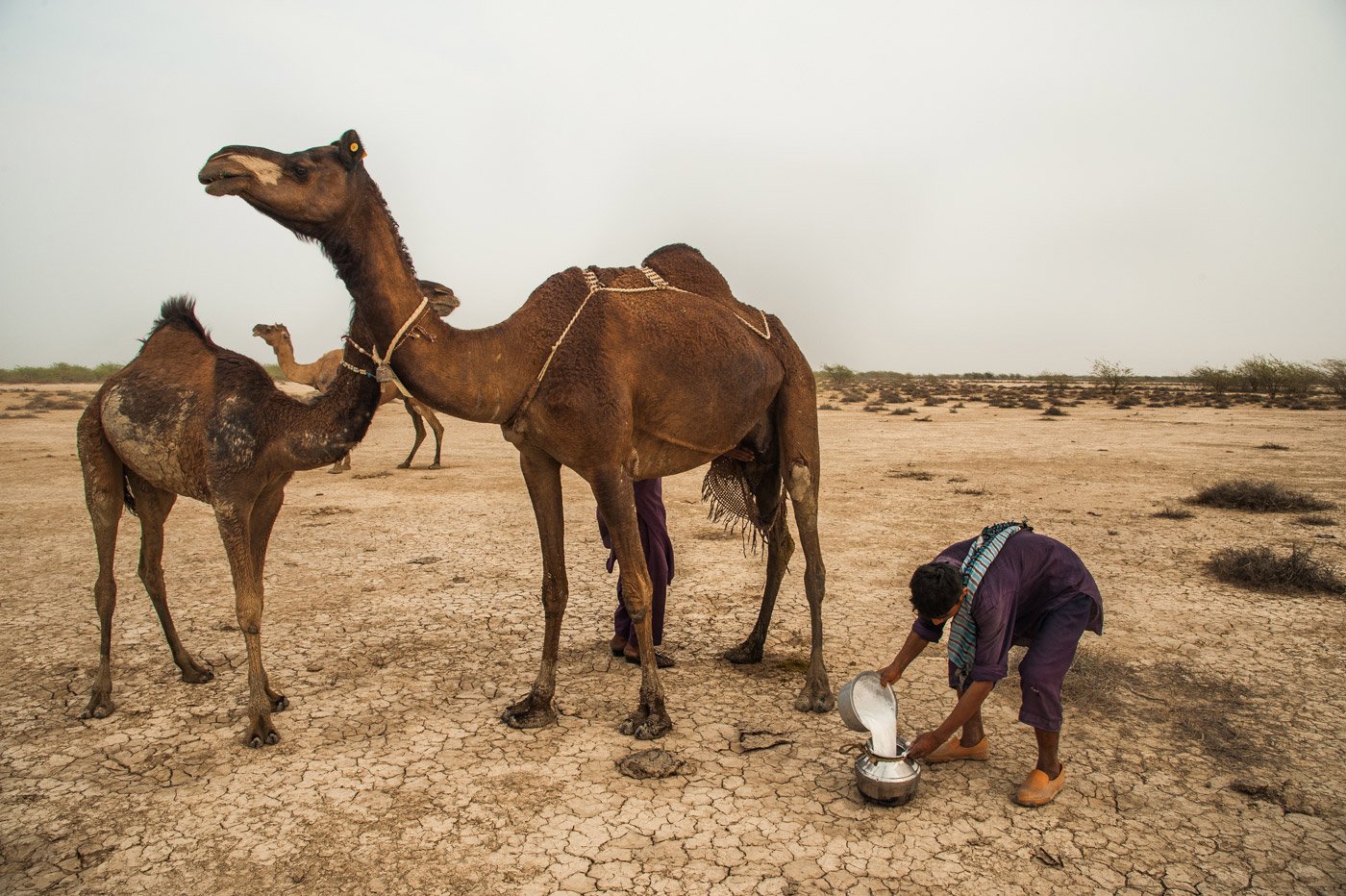 Camel milk along with rotlo (bread made of wheat and bajra) and tea usually make a meal in a Fakirani Jat family. A full-grown female camel can produce 10-12 litres of milk every day. Credit: Ritayan Mukherjee/PARI 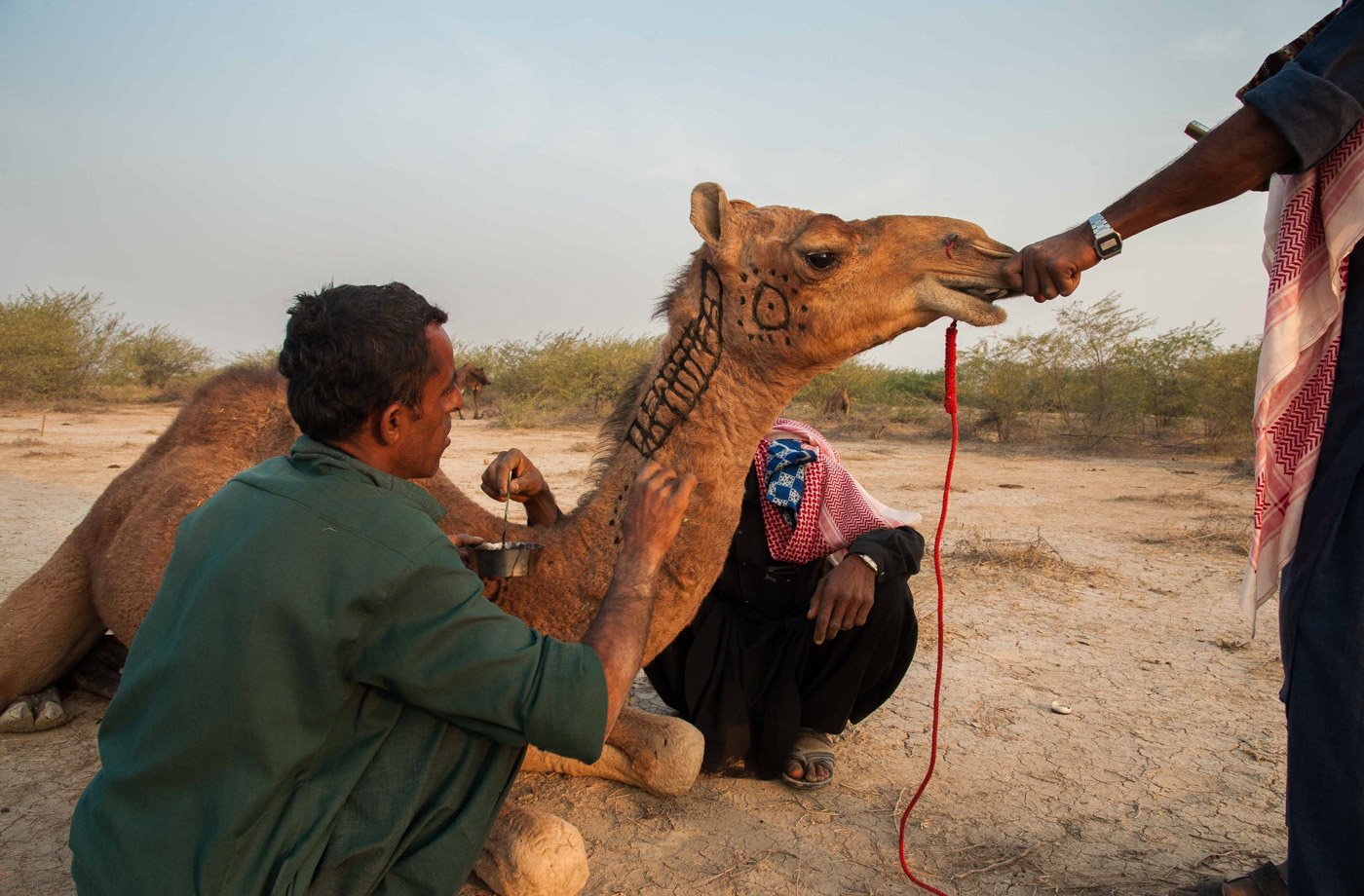 A camel getting ready for a ‘beauty’ contest at a rural fair in the Banni Grassland. To decorate the camels the Jats uses mehendi and other natural colours that don’t harm the animal’s hide. Credit: Ritayan Mukherjee/PARI 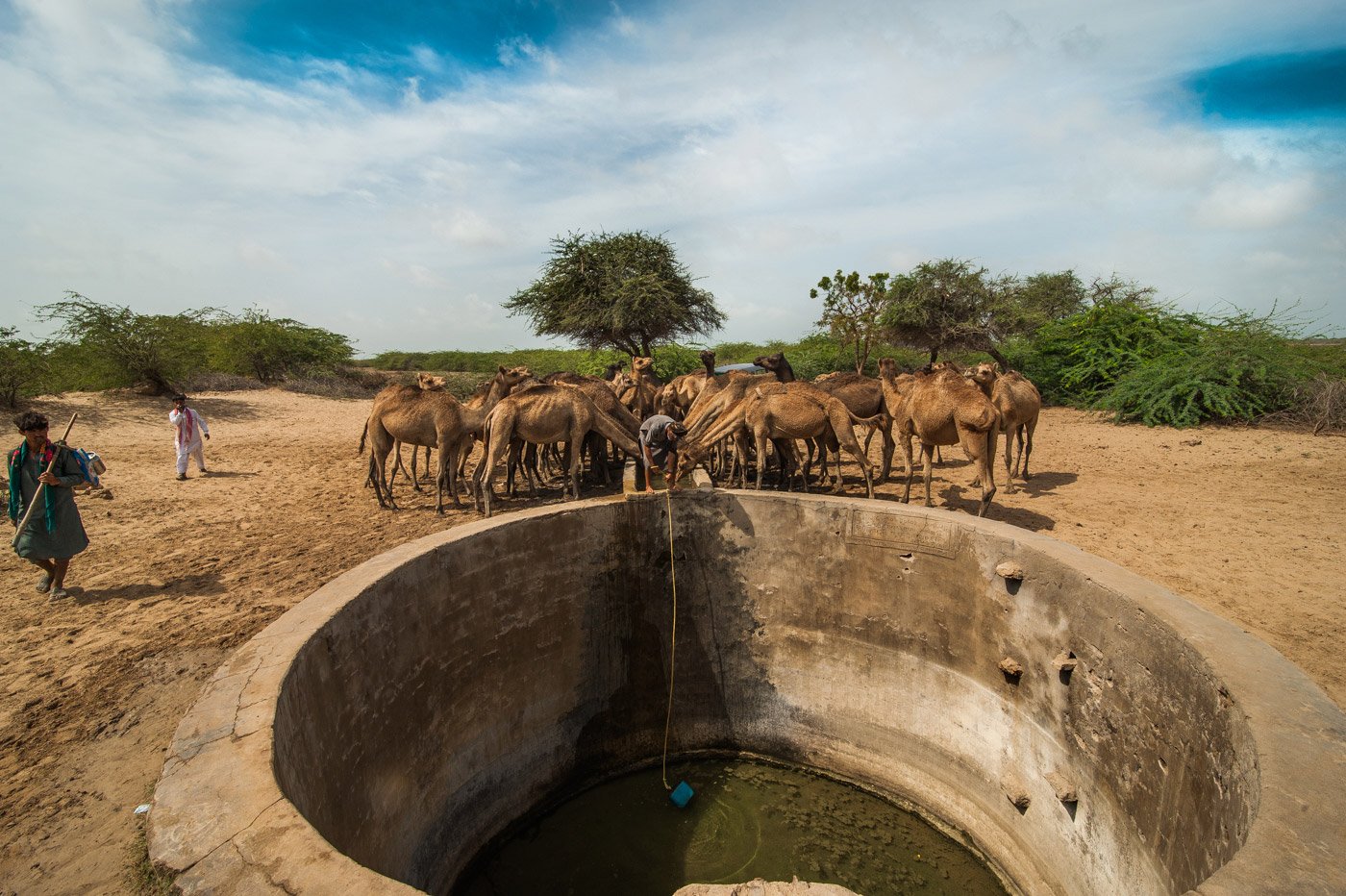 Kharai camels drinking water from a well in Mohadi village of Kachchh, close to the India-Pakistan border. Credit: Ritayan Mukherjee/PARI 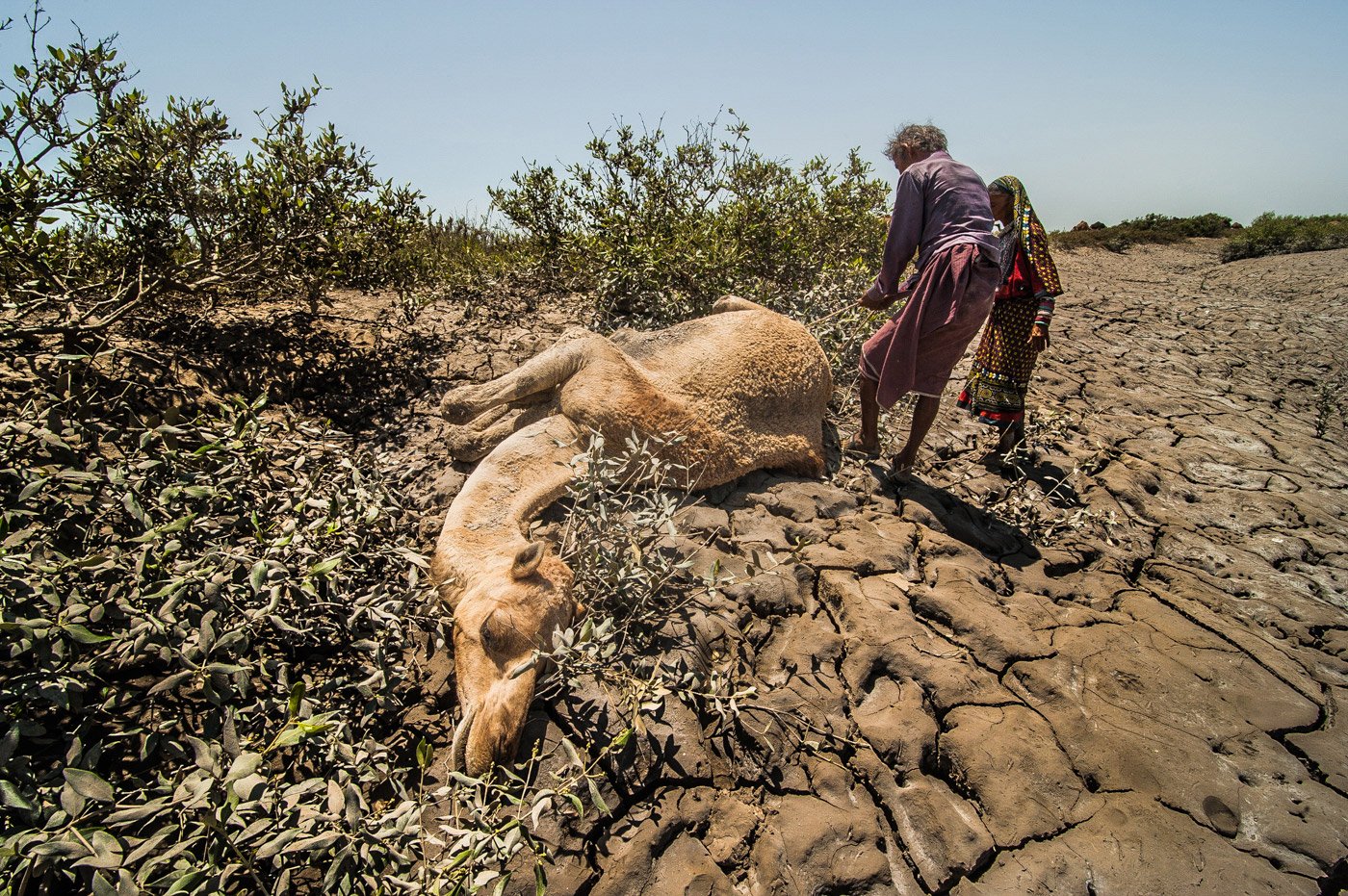 Jat Ayub Ameen desperately trying to rescue a pregnant Kharai, who fell while grazing. In parts of the mangrove forests the earth is so soft that if a camel falls, it cannot stand up on its own. If it remains supine for around two hours, it can get a heart attack. (In this instance, three of us were able to turn the camel upright within 45 minutes). Credit: Ritayan Mukherjee/PARI 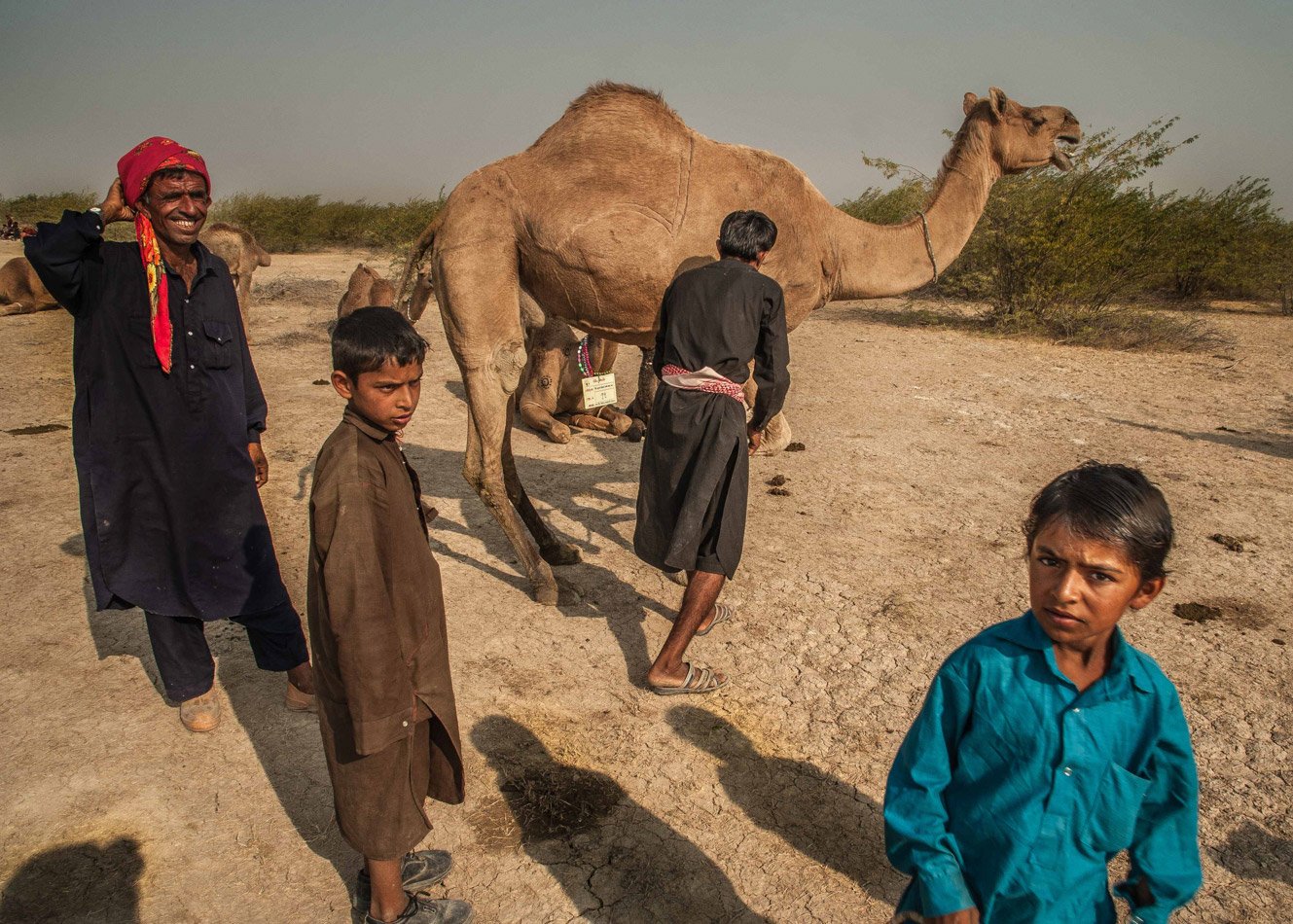 Fakriani Jat children also move with their parents and learn the skills of grazing camels from an early age. Credit: Ritayan Mukherjee/PARI 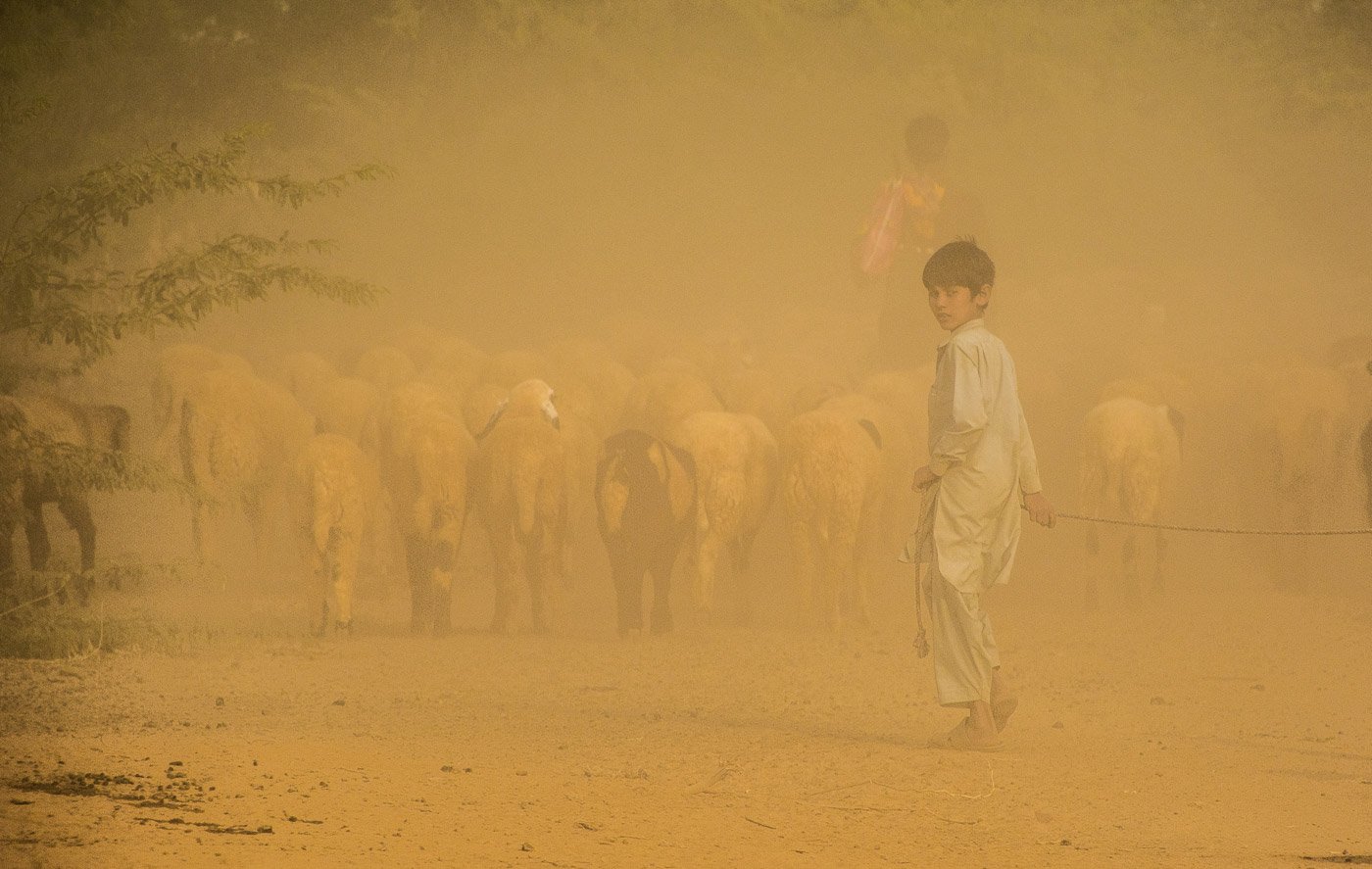 A Fakirani Jat kid moving with his herd while a dust storm gathers in summer. Credit: Ritayan Mukherjee/PARI

Sincere thanks to everyone at Sahajeevan, a Bhuj-based trust and non-governmental organisation that works with maaldhari, and to Hardika Dayalani, my creative collaborator and friend, who introduced me to the nomadic culture of Kachchh.

Ritayan Mukherjee is Kolkata-based photography enthusiast and a 2016 PARI fellow. He is working on a long-term project that documents the lives of pastoral nomadic communities of the Tibetan Plateau.