Conveniently located at Connaught Place, the festival has been a celebration of all that is sacred in Urdu culture. 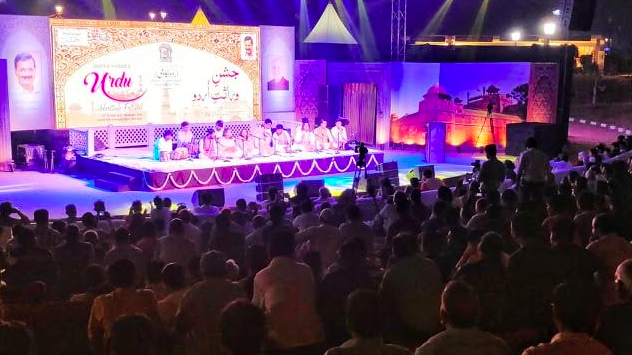 Qawwali at the Urdu Heritage Festival in Central Park of CP, Delhi. Photo: The Wire

After office, they head home. However, the only departure from their usual routine comes during the Urdu Heritage Festival. Their fondness for ghazals and qawwalis leads them to CP’s Central Park whenever this festival takes place.

“We love listening to ghazals and qawwalis and so, for the last two years, we have been coming here in the evening after office hours,” Singh told The Wire on Friday, adding that out of the five-six days that the programme is organised for, the two make it a point to attend on at least three days.

Baxi is in agreement. The timings and location are convenient as well. “It happens after office hours and is at a walking distance from our office. There aren’t enough opportunities to listen to ghazals and qawwalis free of cost, so we look forward to this fest,” he said.

Also read: A Song of Love For a Time Filled With Hatred

When asked if they could read and write in Urdu, their answer was in the negative. However, they added that they were somewhat familiar with the vocabulary and could understand at least 50% of it. “We were here yesterday as well and will be coming again on Monday to listen to the Nizami Brothers, the famous qawwals,” Baxi said. Performers at the festival. Photo: The Wire

Jashn-e-Virasat-e-Urdu (Urdu Heritage Festival) is organised by the Urdu Academy of Delhi, which comes under the Art, Culture and Languages department of the Delhi government.

The six-day event, which began in 2010 and was initially held at the Lal Qila grounds, shifted to Central Park in 2018. This is the third time that the festival is being organised in Central Park. This year’s fest began on Wednesday and will go on till Monday.

Apart from qawwalis and ghazals, the event features Sufi music, dance, plays, debate, painting competition, dastangoi, mushaira and other performances. According to the deputy chief minister of Delhi, Manish Sisodia, this is a way to showcase Urdu as an integral part of Delhi’s culture.

“We want to ensure that Urdu is not only well preserved but it also advances linguistically and socially. Reaching out to a new audience is important in doing so,” he said in a statement released on Tuesday.

With the shifting of venue from Lal Qila to Central Park, the fest has been able to attract a new kind of audience which is not aware of Urdu literature and culture, affirms a staff member of the Urdu Academy.

According to him, “Since the venue is centrally located and there’s a floating population here, the fest gets audiences who would not have attended it otherwise”.

This correspondent met Momin Ali, a Phd scholar of English literature at Aligarh Muslim University, near the Urdu Academy book stall at the fest. Ali, who was visiting the city to attend a seminar at Delhi University told The Wire that he had only chanced upon the event. “I had come to see this flag,” said Ali referring to the 207-foot-tall tricolour at Central Park, “but when I reached, I realised that this Urdu festival was going on.”

Compared to Jashn-e-Rekhta, the festival’s footfall is not very high, which also has to do with the lack of adequate publicity for the event, believe experts and literature enthusiasts. 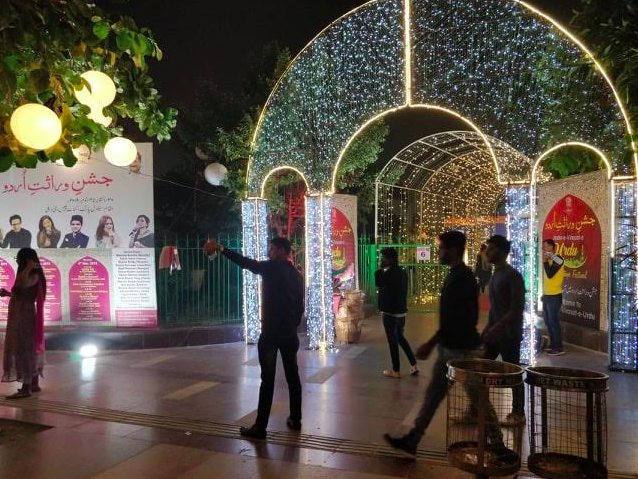 The entry gate to the festival. Photo: The Wire

Diksha Choudhary, whom this correspondent spotted at the stall of Purani Dilli Walon Ki Batein, asked for the meaning of a poem by Faiz Ahmad Faiz written on a poster that she had bought. “I was not aware of this festival till recently. I am so happy that Urdu is being mainstreamed. Thanks to the Delhi government for doing this,” said Choudhary, a communications and public policy professional. She is learning to read and write in Urdu as she wants to try her hand at calligraphy.

Poetry books, posters and other calligraphic items are a big hit at the fest. According to Prasoon Poddar, who sits at the counter of Khwab Tanha Collective, posters of Avtar Singh ‘Pash’, Mirza Ghalib, Amrita Pritam and Faiz Ahmad Faiz are much in demand. Some visitors also ask for Jaun Elia and Saadat Hasan Manto.

Another item which is always in great demand is the Urdu learning book which is frequently sold out. An associate of the Urdu Academy, on the condition of anonymity, told The Wire, “We asked academy officials well in advance to make Urdu learning books available for the fest but it was not done despite several reminders.”

Shiraz Husain Usmani, founder of the Khwaab Tanha Collective and a member of Delhi Urdu Academy believes that the fest can be conducted in a much better fashion as it has a huge potential to attract new audiences. “What is urgently needed is publicity,” said Usmani, adding that “if it is publicised well in advance, it can attract a large number of people.”

This year’s edition of Urdu Heritage Festival will come to a close on Monday (November 4) with the All India Mushaira. Renowned poets such as Rahat Indori, Wasim Barelvi and Alok Shrivastav are scheduled to recite at the mushaira.