The Art of Despair

As news of loss and deprivation arrive every day, a look at the art that has been able to hold a mirror to our wretched condition. A 42-metre tall balloon figure is travelling around the world with its face in its hands right now. Sometimes when the air is low, the shoulders of the figure droop a little, adding a wretched slouch.

The balloon was made by the American artist KAWS, out of a character called ‘Companion’. To put it mildly, KAWS and his Companion are both wildly famous. His toy figures are at once MTV VMA awards, keepsakes for the rich, can be bought for Rs 5000 and find mention in BTS members’ songs. Present, though, it is absolutely everywhere, the Companion is a strange figure.

For one, this Mickey Mouse-caricature has crosses for eyes (but is otherwise alive) and for another, it is often sad enough to be depicted lying face down, or sitting crumpled, with its head deeply burrowed inside its hands. That such a figure – so acutely swung by the tides of current time – has managed to gain popularity enough for several editions of toy sales and a second world tour in balloon form is testament to the fact that in art, despair has takers. 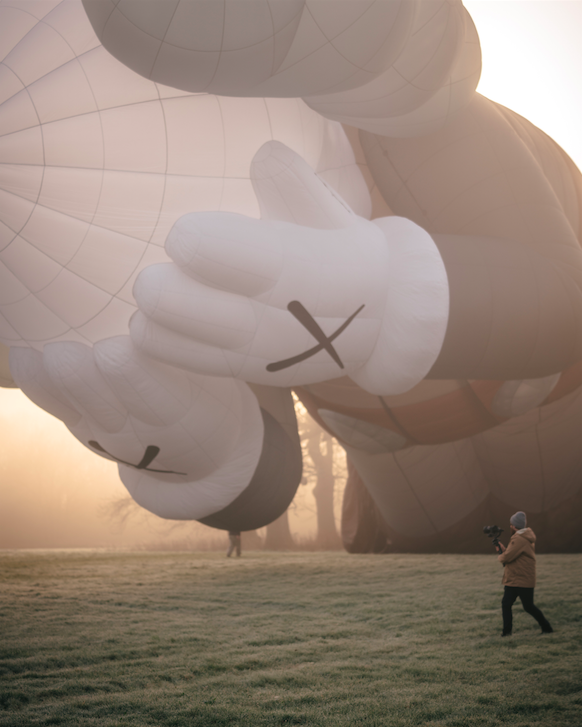 Not much by way of artistic output holds a candle to the depth of suffering we were made to witness in the last few months. Even now, news of loss and deprivation arrive every day. The devastation has been absolute and in spite of a cultural imperative to keep on hoping, art has been able to measure the end of hope as well.

Who are these companions to whom we can turn and who can hold a mirror to our great anguish?

Unsurprisingly, a candidate emerges in Vincent Van Gogh. Made in 1882, Worn Out is only pencil on paper. Yet in style that is succour to so many, Van Gogh gives a Dutch man in an almshouse raw, lived grief to deal with. 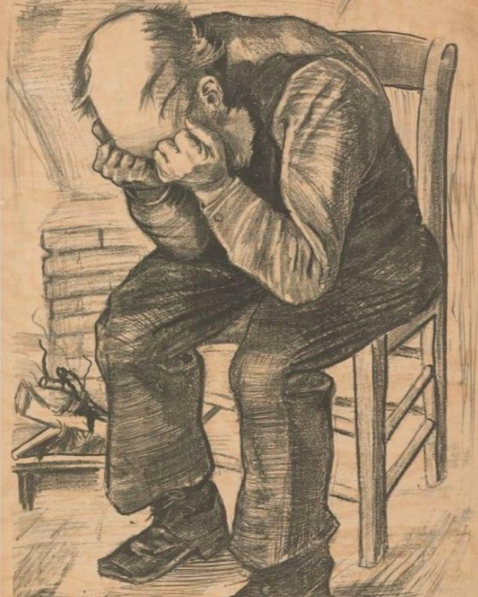 Like KAWS figure above, this 19th century man who Van Gogh drew wishes to see no further. He has had with the world, for no immediate reason, and his slouch is absolute.

Eight years later, and two months before his death, Van Gogh completed the oil painting of this lithograph, giving this despair torrid colour. It was eventually called Worn Out: At Eternity’s Gate.

That despair is neither protest nor simple sorrow is evident from British artist Celia Paul’s Family Group (1984-1986). The painting has Paul’s mother and four sisters sitting on a bed. Paul mentioned the painting in her staggering ‘Diary’ piece in the London Review of Books, in which she took a very hard look at how her art and life would have been with and without the influences of her former partner, the artist Lucian Freud, and his coterie of admirers. 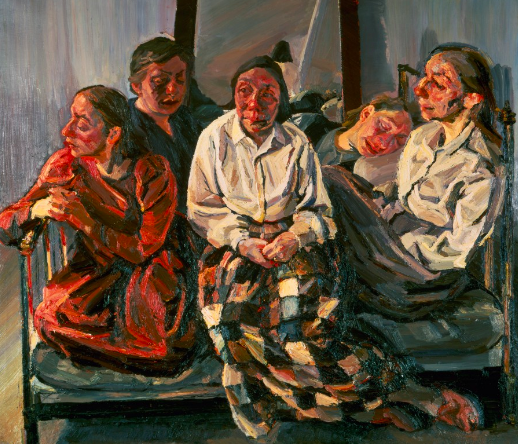 All five women in the intimate painting are burdened, and this was by no means a family portrait of joy. But it is the faces of two of Paul’s sisters to the right that are the ones that make no claims of communicating anything other than complete devastation. The sun shines, through Paul’s ample strokes, directly on her sisters’ sad faces. The tightness of the family’s pose brings fresh wonder as to how it was that such suffering came to be written with such clarity on human faces at all.

Paul’s sister’s anguish is mirrored in another face which does not occupy the centre of a seminal painting. Anguish at a moment of sublime significance is also writ large on the two figures beside Jesus Christ in one of F.N. Souza’s many ‘Crucifixion‘ works. This despair fights the Biblical imperative to keep the faith in telltale Souza style, asserting once again that where there is such suffering, there is little cause for hope. It is not as if despondency has not occupied artists for a long, long time. In the late 18th century, Swiss light-and-shadow wizard Johann Heinrich Füssli painted an artist in wretched sorrow over his own perceived inability to match up to the greats in the aptly named, ‘The artist’s despair before the grandeur of ancient ruins’. 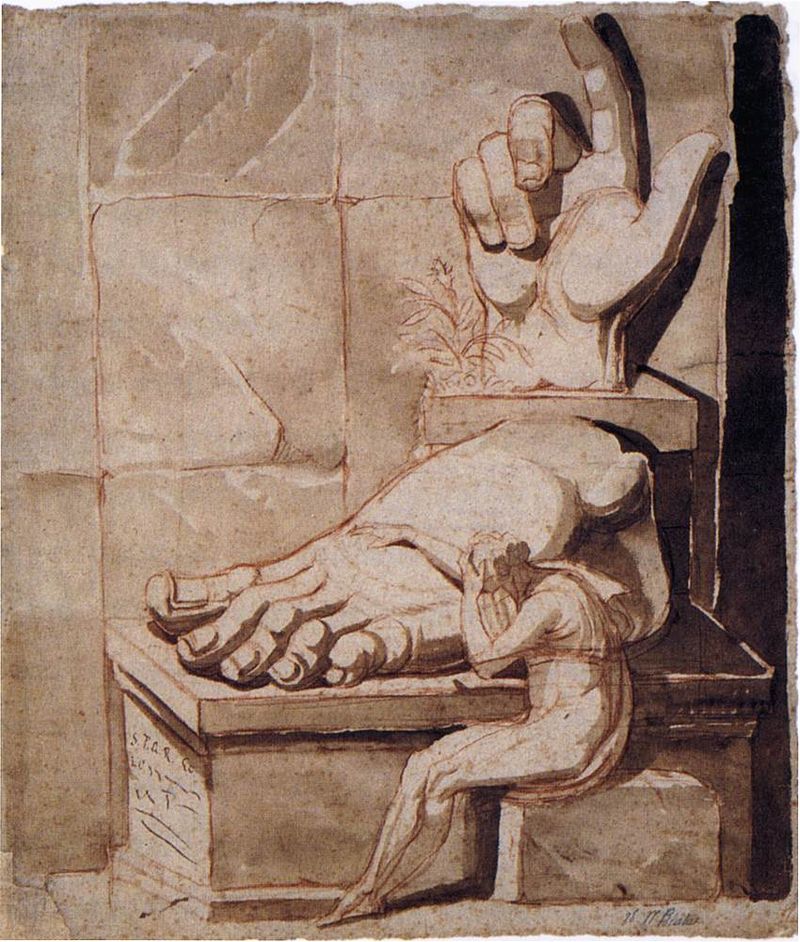 ‘The artist’s despair before the grandeur of ancient ruins’ by Johann Heinrich Füssli. Photo: Wikimedia Commons

A 530 BC vase has Ajax bending over his sword, armour cast aside. And yet, a Greek mythological hero has purpose and a guise of agency that people waiting in queues in the India of today can only hope for. For this immediacy of purpose, we must turn to a source of art as old as time – Instagram.

Few people have not seen a ‘bakeryprasad’ Instagram Story. Ambedkarite artist Siddhesh Gautam’s statement clarity delivers brutal messages and the strength of his activism drives all obtuseness out of his work. Yet, his take on the Dali staple ‘The Disintegration of the Persistence of Memory’ pins blame where it is due and finds a way to reflect the odd devastation wrought by rounds of deaths and government apathy. ‘Bricks and Pyres: The Disintegration of the Persistence of Memory’, 2021. Photo: Instagram/bakeryprasad

Shorn of context, artist Sara Hagale’s pencil figures are stuck in mind-bending anguish as they walk, read and sit in various stages of droop. 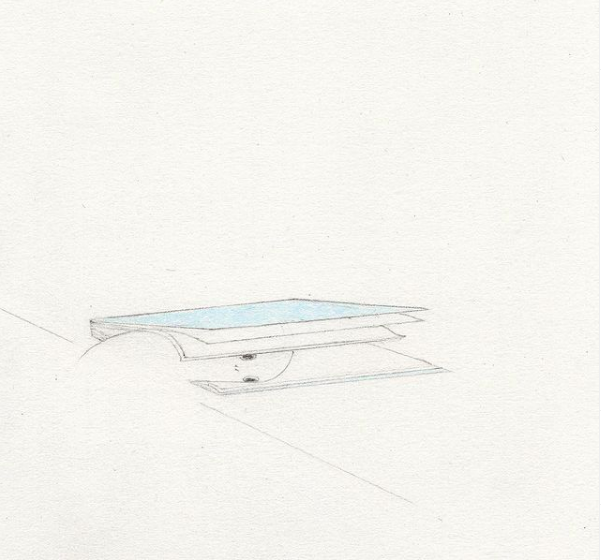 With every passing day bringing new realisation on the intensity of our particular lived condition, art stands as a constant reminder of the universality of despair. On social media and on century-old canvas, human sorrow survives in unique ways. 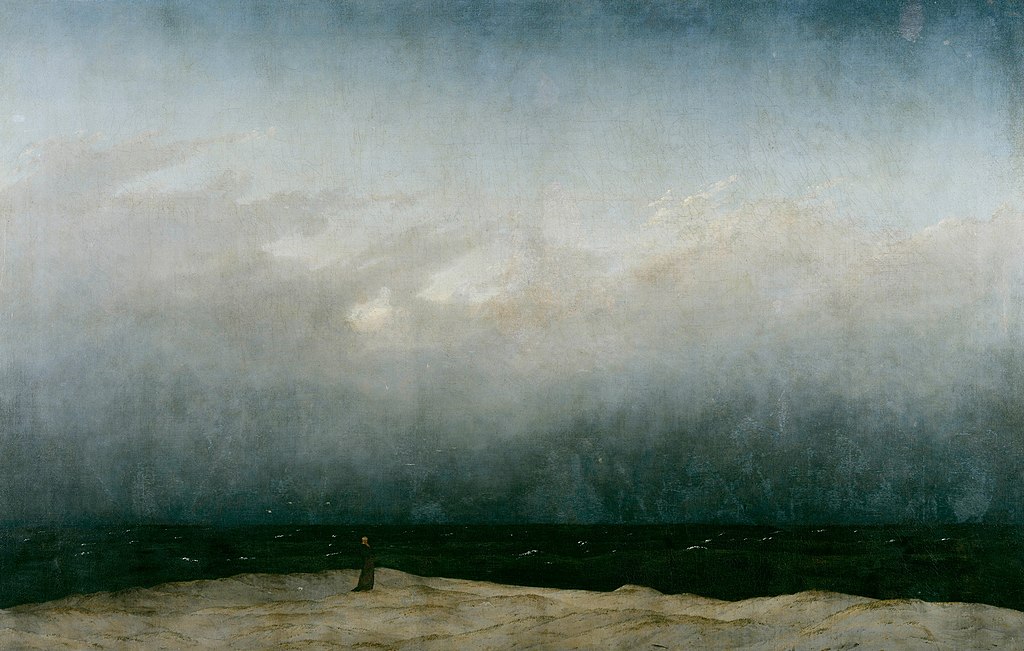 The above 19th century painting is a monk standing by a rough sea, the air around him bearing down. The curve of the monk’s frame and the absence of any depth to lend relief to his gaze torture the viewer and at once represent an innate characteristic of our despair – the sense that it is an endless oppression.