Quarantined in the bylanes of Kalighat – one of the oldest neighbourhoods in South Kolkata – Bhaskar Chitrakar has planted the virus right within the scope of a 200 year-old folk-art form.

The traditional composition of a babu-bibi embrace works out a whole new romance with the coronavirus in their lives. Photo: Bhaskar Chitrakar 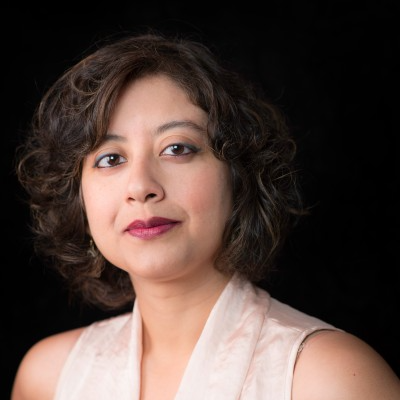 The one thing the coronavirus can’t kill is art. Many a mural, graffiti, visual installation and cardboard artwork has popped up in public and private spaces.

Quarantined in the bylanes of Kalighat – one of the oldest neighbourhoods in South Kolkata – Bhaskar Chitrakar has planted the virus right within the scope of a 200 year-old folk-art form. The babu – domesticated and dislodged from his favourite ornate chair – watches on as the crows get restless for a cure for Prince ‘Karuna’. Photo: Bhaskar Chitrakar

Bhaskar is the only surviving patua painter (artists who practice scroll-painting) in the Kalighat area today. His art puts a contemporary spin on ‘Kalighat pata’ – a class of paintings on paper and textile produced by artists in the neighbourhood of the famous Kali Temple since the 19th and early 20th centuries.

Historically, Kalighat paintings have brought to focus the ordinariness of daily life. They grew out of the motivation to move away from religious art, painting instead, the painters’ satirical responses to the changing social and cultural realities of the city of Calcutta at the time.

Kalighat paintings are known for their sense of light-heartedness. A common theme is the frenetic lives of the quasi-bourgeois, the Bengali elite. It revolves around the daily life of the babu – the Bengali middle-class clerk soaked in class and caste privilege. He is trained by the British so well that he performs ‘being British’ better than his English master.

He is often shown dressed for the colonial gaze, paid well enough to furnish his home with four poster beds and Victorian chairs, owning cats that are picky about the fish they eat, smoking from a hookah, his skin as radiant as his leather shoes, exceedingly wealthy, and wearing impeccably laundered and pleated, expensive and embroidered dhotis that inevitably get shat on by crows. 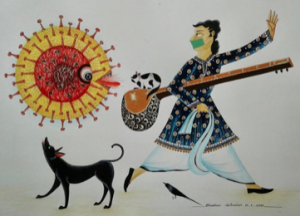 The coronavirus assumes a menacing eye and a sticky tongue; takes babu’s cat head-on. The babu vows to leave it alone, but not without his tanpura. He is uproariously holding on to the pleats of his dhoti, for the love of his refined, cultured, life. Photo: Bhaskar Chitrakar

Bhaskar is famous all over the world for his babu-bibi series. Steeped in Victorian values of masculinity and morality, the Bengali babu, with his luscious and pleasurable wife – bibi – is depicted in all the pretense of their lives in Bhaskar’s drawings.

Enter COVID-19. Babu-bibi’s curated worlds are completely disarranged with its arrival. Their cat is unable to practice its instrumental and vocal skills on the tanpura and is altogether distraught at the viruses it now has to swat like it does mosquitoes. Babu’s idle romance is rendered even more unproductive now that he’s six feet apart from bibi, and the frustrated crows on his terrace have discovered a vaccine cure because they have had it with no leftovers to feed on!

Since the lockdown, Bhaskar has painted a five-part series on the coronavirus recasting babu’s domestic scene. Through the four weeks of the lockdown, the virus has mutated in shape, colour, and form. Chronologically speaking, at first, it had no features. 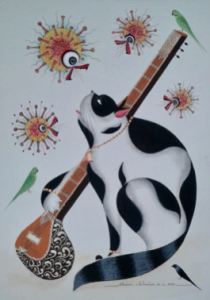 The tongue of the coronavirus bifurcates and causes pandemonium in their cat’s mature, sophisticated, life. Photo: Bhaskar Chitrakar

His debut painting in the series presented a gigantic virus head on a mini zamindar babu body. Then slowly, through the course of the quarantine and his next four paintings, the coronavirus attains eyes, and how. They talk back! The virus grows a prickly, sticky tongue that would/could, if need be, wrap around babu and bibi, their cats, and their tanpuras and their crows. Eventually, the virus would chase away nearly all the dignity and self-imposed poise of the babu, along with his chosen symbols of cultural production.

Bhaskar’s visual juxtapositions of the coronavirus on babu life opts out of the tone of the tragedy of this pandemic and adopts the lightness of frolic. In some ways, his commentary on the limits to which the mimicry of one’s masters can be taken has been essential to the development of the satirical and innovative tradition of Kalighat painting. These paintings are bold medleys of the norms that ruling classes live by. The irony is assertive, and the satire palpable.

Bhaskar’s paintings have delighted people nationally and globally. From his 6-feet by 6-feet bedroom/studio, he has established a returning clientele in Denmark, New Delhi, Minneapolis and Sweden, and art galleries in Calcutta, New Delhi, and Minneapolis are hot with his displayed artworks. 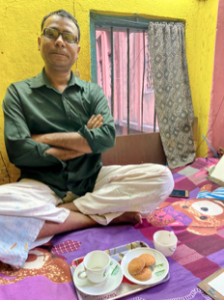 His recently concluded ‘Kali-Kahlo’ series explore the complementary feminist choices made by Frida Kahlo and Goddess Kali. Kali has been a traditional and recurring text for Kalighat’s painters. But Bhaskar’s mind and brush iterate Kali in ever new and radical ways.

His father was a prominent idol-maker in his prime. He is known for moulding mud into 13-foot tall sculptures of gods and goddesses. The origin of Chitrakars (his family name deriving from the family profession of the ‘painter’) coincide with historical and mythological evidence from around the 13th century. Bhaskar never quite got into idol-making.

“But when I was a kid, I used to run off to Victoria Memorial daily and get lost in the sculpture of this horse. I was enamoured with its head, its tail, the flanks, and I would reconstruct in my own head how they’d have gone about making it,” he says. Observing minutely the cut, carve, and chisel of that sculpture made him obsessed with detail in art, and ultimately resulted in the miniature details in the cat’s ornamentation, the bibi’s piano, Kahlo’s brows, and Kali’s eyes. 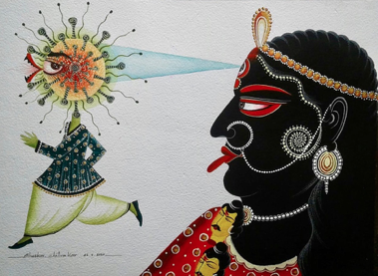 He suspects that the fifth painting is his last in the coronavirus series for a while, since he has finally run out of paper. The trusted shop in Gariahat where he sources his Fabriano Italian paper has been shuttered since lockdown, but the powdered stone fragments and the gum that turns these dry colours into wet paints, wait in abundance in his room.

Perhaps just like his art, our realities are rich in irony, too.

Ritika Ganguly is an anthropologist, artist, and research consultant based in Minneapolis, Minnesota. When she isn’t advising organisations on grantmaking, she’s composing music for 17th century Baul poetry. She has proven that she is not a robot.