The filmmaker, who had seen Girish Karnad talk about science on Doordarshan’s Turning Point, first met the playwright when he arrived at his doorstep with some yogurt curry.

A prominent theatre person once invited Girish Karnad for his birthday. Karnad replied with the line, “Birth and death are personal things. It has to be marked with those close to us. It is what we do between birth and death that matters.”

When he was about 16 years old, Karnad used to make sketches of prominent people and send it to them. He would request them to sign it and send it back to him. The young Karnad had quite a collection of competent sketches of the likes of Albert Einstein, Sarvepalli Radhakrishnan and others, all signed by those legends. He sent one such sketch to the Irish playwright Seán O’Casey. The playwright, however, wrote back saying, “Why do you bother about getting the autographs of other people?” O’Casey instead asked Karnad to use his intelligence and work so that people would one day ask for his autograph.

Karnad was just 22 when he wrote Yayati. Since then he has written several plays that have established him as one among the foremost playwrights in India and the world. My earliest memory of Karnad is from when he moved into his house at JP Nagar in Bengaluru about 25 years ago. Karnad came to my house one day with a box of bellulli thambuli, a garlic yogurt curry. “What are neighbours for if we cannot exchange groceries and food?” he asked my mother.

I had seen him talk about science on Doordarshan’s successful show Turning Point, so it was strange to see him at our door with box of thambuli. Karnad loved his house and the neighbourhood. Five years ago, the road in front of his house was dug up, the trees that lined it were felled and a huge underpass was created. The construction process and the traffic snarls that followed after the project was completed, turned the road into a busy and noisy one. But it also inspired scenes in three of his plays ⁠— Boiled Beans on Toast, Wedding Album and A Heap of Broken Images ⁠— where characters comment on the changing landscape of the city.

Last year, he sold his house in JP Nagar and shifted to an apartment in central Bengaluru. When I visited him there, he said, “Look! It is so quiet here right in the centre of the city. All the madness has moved to other places.” Girish Karnad was full of interesting anecdotes of what were actually historic moments in cinema and theatre. Source: Twitter/@NFAIOfficial

‘Will you assist me?’

When I completed my Masters in Communication and wanted to move to Mumbai, my father suggested I pay a visit to Karnad. He was a stickler for time who once turned away a famous Bollywood actor from his house in London because she had arrived an hour early. I also saw him scold another prominent actor for being “five minutes late”. So for that meeting, I went five minutes early, waited outside his house and walked in just at the appointed time.

Nervously, I told him about my intention of moving to Mumbai and said I had friends there who could help me find work. And in what I thought was a very subtle manner, I told him that I was only visiting him because my father had asked me to and not to ask him to pull favours for me. He surprised me by saying, “Why do you want to go to Mumbai? I am doing a TV series. Will you assist me?”

Thus began my journey into the world of cinema and television. I worked with him on two television shows. When he decided to bring Kuvempu’s classic Kanooru Heggadithi to the screens, simultaneously as a feature film in Kannada and a serial in Hindi, I became his associate director. While filming was on, he won the Jnanpith Award and had to go to Delhi. Since we were in the Malenadu region of Karnataka and the entire cast and crew were stationed there, we could not stop shooting. So Karnad put me in charge and went. S Ramachandra, the legendary cinematographer who shot Malgudi Days, was the cameraman. I was 23 years old and overwhelmed. Every other evening, Karnad would call on the landline phone in the huge rented house where the main crew lived together for almost two months. When he returned and saw the footage of the scenes I had shot, he told me to take over the television series completely so that he could concentrate on the film.

‘Smoke your last cigarette with me’

Karnad was full of interesting anecdotes of what were historic moments in cinema and theatre. When he was director of Film and Television Institute of India, the selection panel rejected Om Puri from admission for the acting course, reportedly because he was pock-marked and thin. Karnad used his discretionary powers to admit him, and the rest is history.

When he saw a young Shankar Nag in a Marathi play in Mumbai, Karnad told me that he went backstage and approached the actor to play the lead in his upcoming film. Shankar said that while he respected Karnad as a writer and director he did not want to act under him and instead wanted to be his assistant director. Karnad returned to Bengaluru and called Anant Nag, Shankar’s elder brother. A few days later Anant brought Shankar to Karnad’s house and Ondanondu Kaladalli became his entry into the world of cinema. 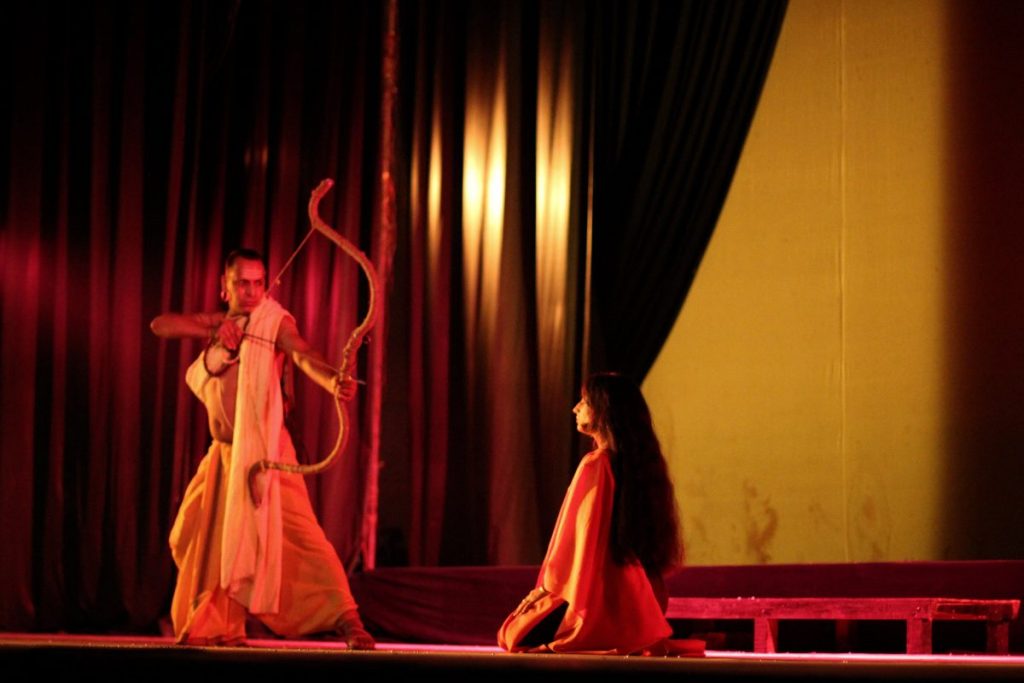 Karnad could quote freely from the Upanishads, the Gita and classical Sanskrit literature, all of which inspired his work. A moment from his play The Fire and the Rain. Source: bhisham pratap padha/Flickr (CC BY 2.0)

When Karnad decided to quit smoking about 40 years ago and joined the Jindal Naturecure Institute, Shankar visited him there. Karnad told me that the actor asked him to come along for a walk and pulled a cigarette out of his pocket. Karnad told him that cigarettes were strictly forbidden on the campus but Shankar said, “If you are quitting, then I want you to smoke your last cigarette with me.”

Karnad also told me how Amjad Khan once gave him a full lesson on the art of cutting meat and that Satyajit Ray considered the Ambassador a better car than the Mercedes. He told me so much more too.

‘Art that created the world’

Once, BBC was doing a series titled Art That Shook the World and asked Karnad to present the episode on the Mahabharata. He told the producers that the Mahabharata could not be compared to any classic in the world and that they would have to run a separate series called ‘Art That Created the World’ if they wanted to feature the epic. He convinced them to do an episode on the Bhagavad Gita instead.

He could quote freely from the Upanishads, the Gita and classical Sanskrit literature just as he would quote Shakespeare and Eliot.

Odakalu Bimba, a play that involved just one actor in conversation with herself on screen was the first time that Karnad decided to direct a play he had written. Because he was struggling with how to make the interaction between the actor on stage and her pre-recorded video convincing, I suggested a few things that could make it work and volunteered to be at the shows to ensure that the technical part went smoothly. When the posters of the play came out, Karnad had credited me as the director of the play, along with him.

When Agni Sreedhar was looking for a director for the first film he was producing, I suggested that he ask Girish Karnad. Sreedhar narrated a story to Karnad who said that it needed a young director with energy. Sreedhar eventually chose me to direct it. I requested Karnad to co-write the screenplay with Sreedhar. He obliged and also enacted a major role in the film. When we wrote the first draft, Karnad read it and said, “There is nothing here for women”. 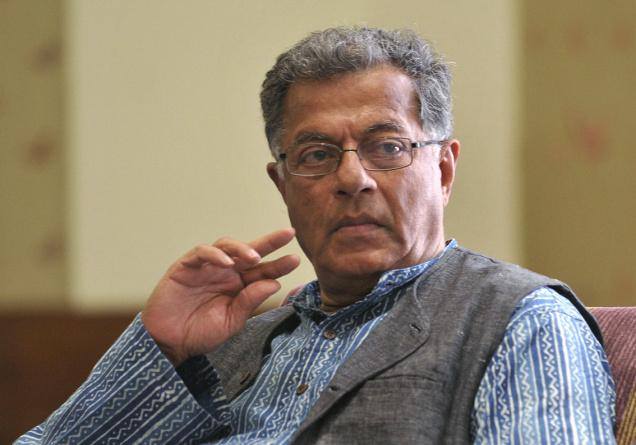 It was an underworld film based on real events that had happened in the Bangalore of 1986. We had tried to make the script dramatic but no one had thought of the women audience until Karnad.

He also suggested the dialogue “Daari yaavudayya vaikuntakke” which became a memorable scene in the film Aa Dinagalu.

When I was commissioned first by the information department of Karnataka and later by the Sahitya Akademi, to make a documentary on Karnad, I was able to shoot extensively with him in the places where he grew up. When I sat down to edit it, I realised that it needed very little commentary. Karnad himself was so articulate that all I had to do was to stitch the footage into a cohesive narrative.

Karnad was always vocal in his opinions. From the time he quit FTII in protest against the Emergency, to his criticism of the Defamation Bill brought by Rajiv Gandhi, his stringent stand against the Babri Masjid demolition and subsequent communal violence that followed, Karnad has always been outspoken. As the news media expanded from dailies and Doordarshan to television channels and social media, the need to constantly sensationalise made Karnad’s outspokenness a gold mine for them.

Karnad loved his morning walk. He would not miss it no matter where he was. His typical morning involved a long walk around the mini forest in JP Nagar. He would then stop by at SLN Refreshments – a café near his house where he would eat his favourite uddina vada. His walk was something he missed a lot during his illness in the last three years.

A few months ago, Karnad was nominated for an award for literary excellence by the Hindi publication Amar Ujala. It was to be conferred on him by the former president of India, Pranab Mukherjee. Since Karnad could not travel he decided to send them a video of his acceptance speech and called me to come and shoot the video.

Once we completed filming it, he told me that he might not live for much longer. “At the most, I have a few months, that’s it,” he said in a matter-of-fact way. He was aware of his condition and had reconciled himself to it. I tried to lighten the situation for myself. “What if your assessment is wrong?” I asked. “Then I’ll write the second part of my autobiography,” he said.

He had told his family and friends that his death had to be a private affair. He left us with the same quiet dignity and integrity with which he had lived.

Chaitanya K.M. is a filmmaker and theatre person.