The sale of the painting depicting the British parliament full of primates comes a year after another Banksy canvas shredded itself at a Sotheby's auction after being sold for $1.3 million. 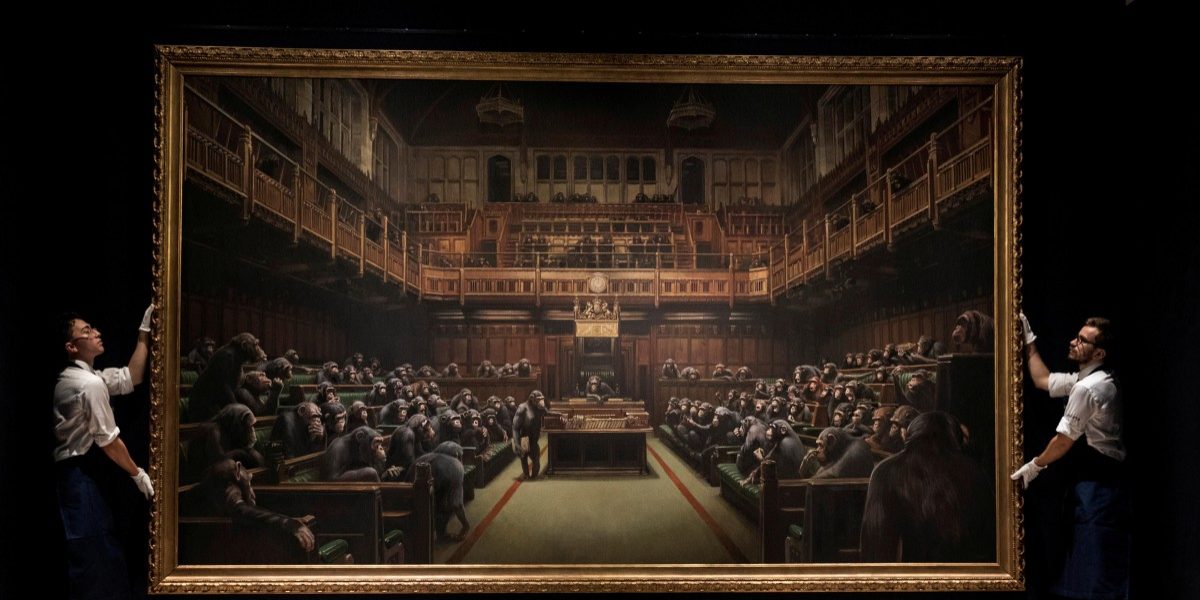 Sotheby's staff pose for a photograph with Banksy's 'Devolved Parliament' which has an estimated value of 1.5-2 million British pounds in a forthcoming sale in London, Britain September 27, 2019. Photo: Reuters/Simon Dawson

Auctioneers Sotheby’s estimated the 2009 oil painting “Devolved Parliament” would sell for 1.5 million to 2 million pounds, but a 13-minute bidding war drove the hammer price up to 8.5 million pounds, for a total of 9,879,500 pounds including fees.

Sotheby’s said it was a record price for a Bansky work of art.

“Record price for a Banksy painting set at auction tonight. Shame I didn’t still own it,” Banksy wrote on Instagram beside a quote from art critic Robert Hughes.

“… The price of a work of art is now part of its function, its new job is to sit on the wall and get more expensive. Instead of being the common property of humankind the way a book is, art becomes the particular property of someone who can afford it,” the Instagram post quoted Hughes as saying.

Underneath, one person commented: “You should have shredded it again.”

The sale came a year after another Banksy canvas, “Girl with Balloon,” shredded itself at a Sotheby’s auction after being sold for $1.3 million. 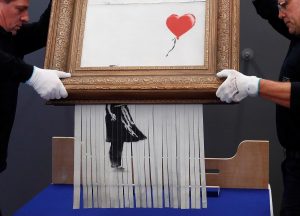 Banksy’s ‘Love is in the Bin’ was originally sold as ‘Girl with Balloon’. The moment the auctioneer’s gavel fell, a hidden mechanism inside the frame shredded half the painting, which had just been sold for over a million pounds. Photo: Reuters

Although the 4-meter long (13-foot) “Devolved Parliament” was crafted a decade ago, Bristol Museum displayed it again in March to mark the date when Britain had been scheduled to leave the European Union.

“I made this 10 years ago. Bristol museum have just put it back on display to mark Brexit day. ‘Laugh now, but one day no one will be in charge,'” Banksy wrote on Instagram at the time.

The artist, said to be from Bristol, keeps his identity a secret and is known for his political or social-commentary graffiti work around the world.