As Modi's Stock Plummets, Cartoonists Have a Field Day

From the prime minister moving cylinders to allow cameras to catch him better, to him staring at mounds of pyres, cartoonists have been scathing. 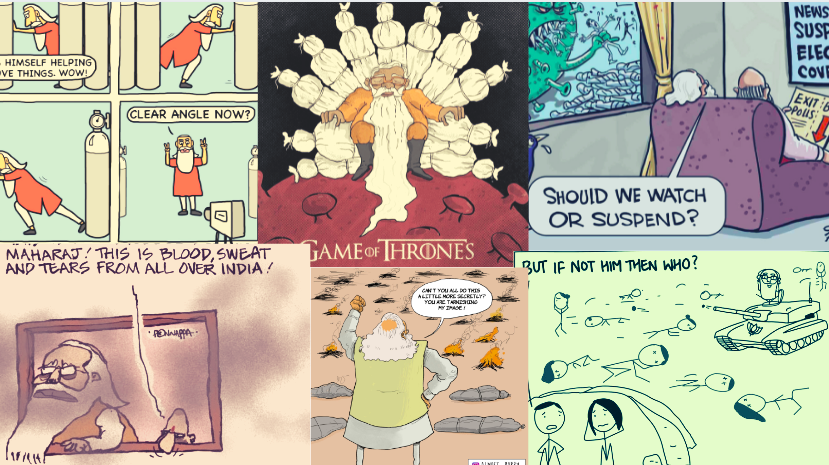 New Delhi: India’s COVID-19 crisis is deep and has led to reports of untold human misery. As news of death and suffering occupies nearly all social interactions, those in charge of making us laugh have a tough task. Cartoonists, faced with the scale of the current tragedy, have been scathing in placing the blame on Prime Minister Narendra Modi – who held several election rallies as a crisis was brewing.

Coupled with the record-breaking COVID-19 numbers, the crippling lack of medical supplies, layers of governance failure and allegations that crucial warnings were ignored, is the fact that the election-winning abilities of the prime minister received a blow in West Bengal, Kerala and Tamil Nadu. The combined effect has given opportunity to cartoonists to express emotions many Indians must be feeling – anger and helplessness.

The Wire collects some recent cartoons hitting out at the prime minister below.

One cartoonist whose work has gone truly viral in this milieu is Satish Acharya. Acharya posts regularly on his popular Twitter account, @satishacharya, and has taken on various aspects of the BJP’s Bengal drubbing – cultural, political and the purported lack of attention to the health crisis in this time. 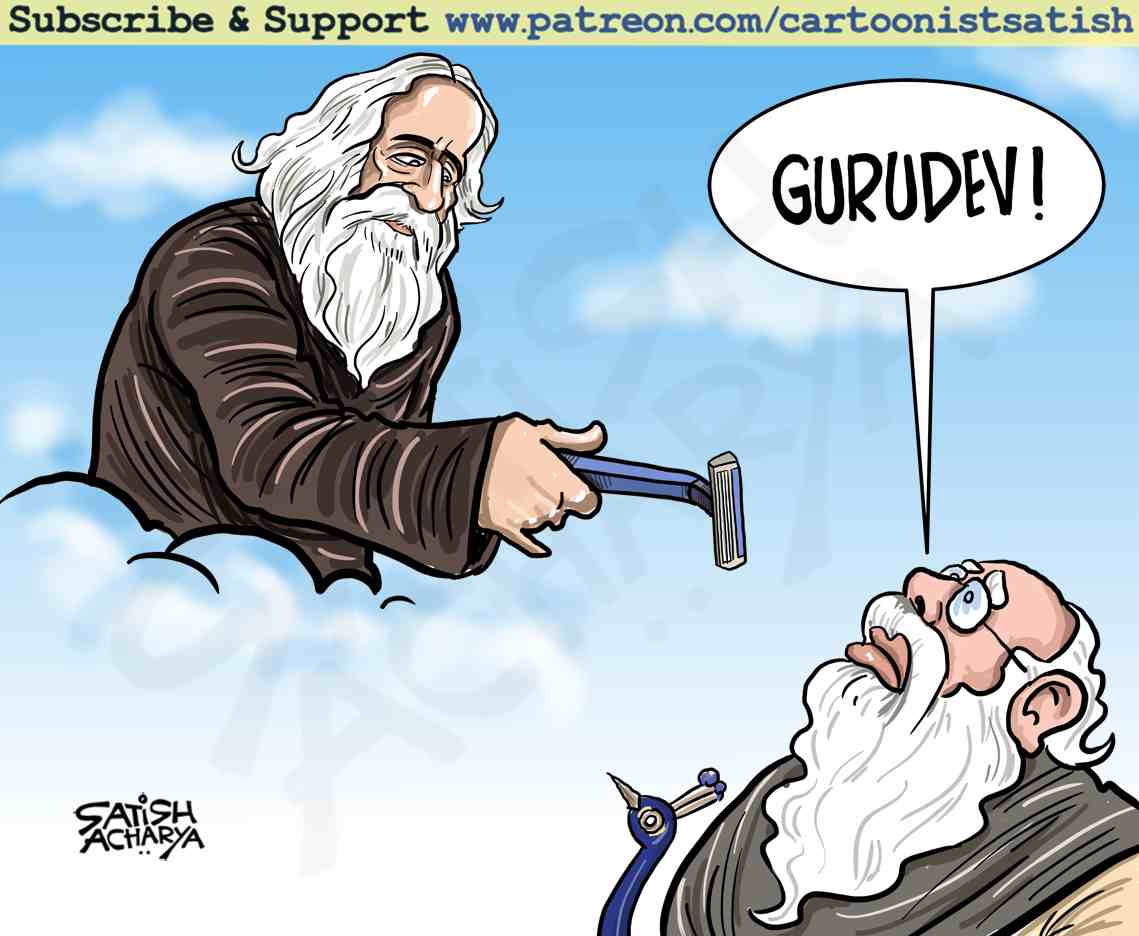 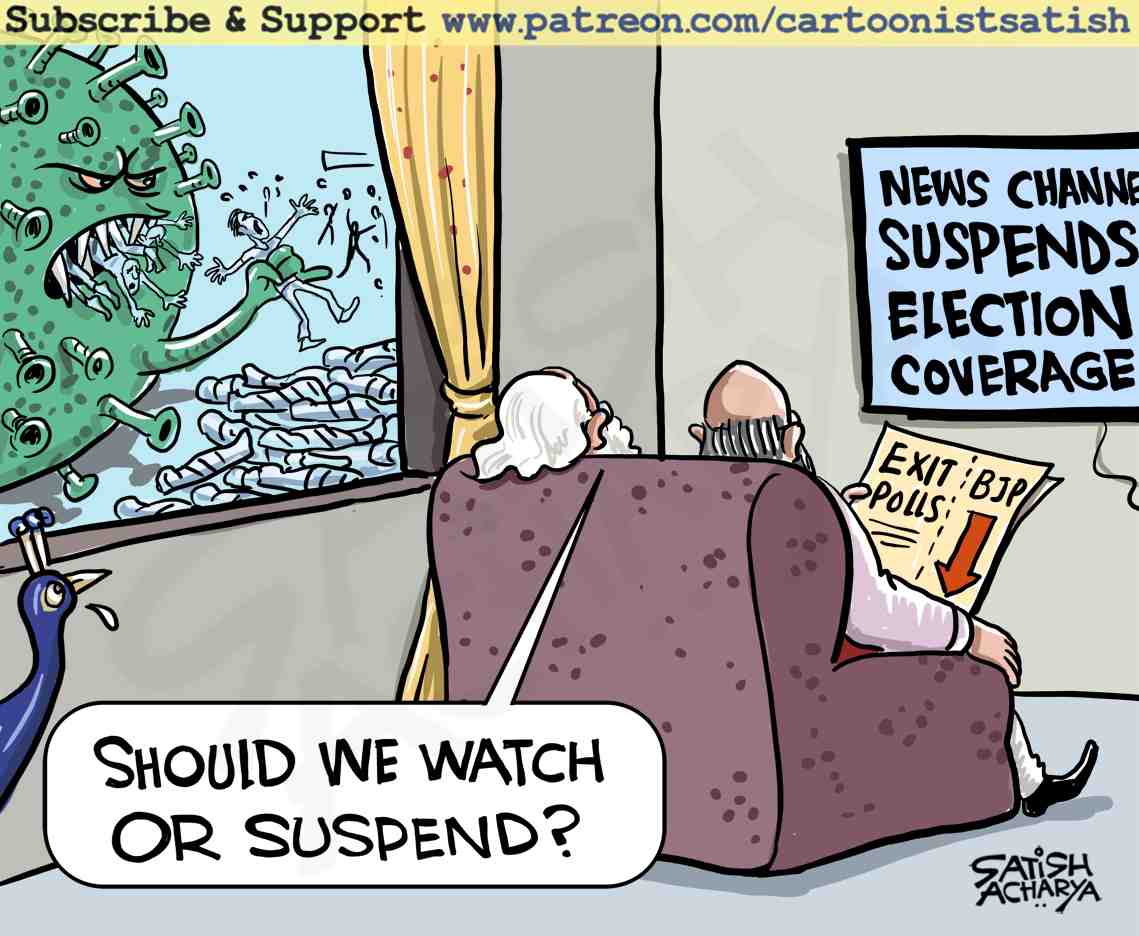 Modi’s initial lack of enthusiasm in addressing the crisis as it was building has been taken on by cartoonist ‘Shaky Lines’, who posted the following through his Twitter handle, @ShakyLines. 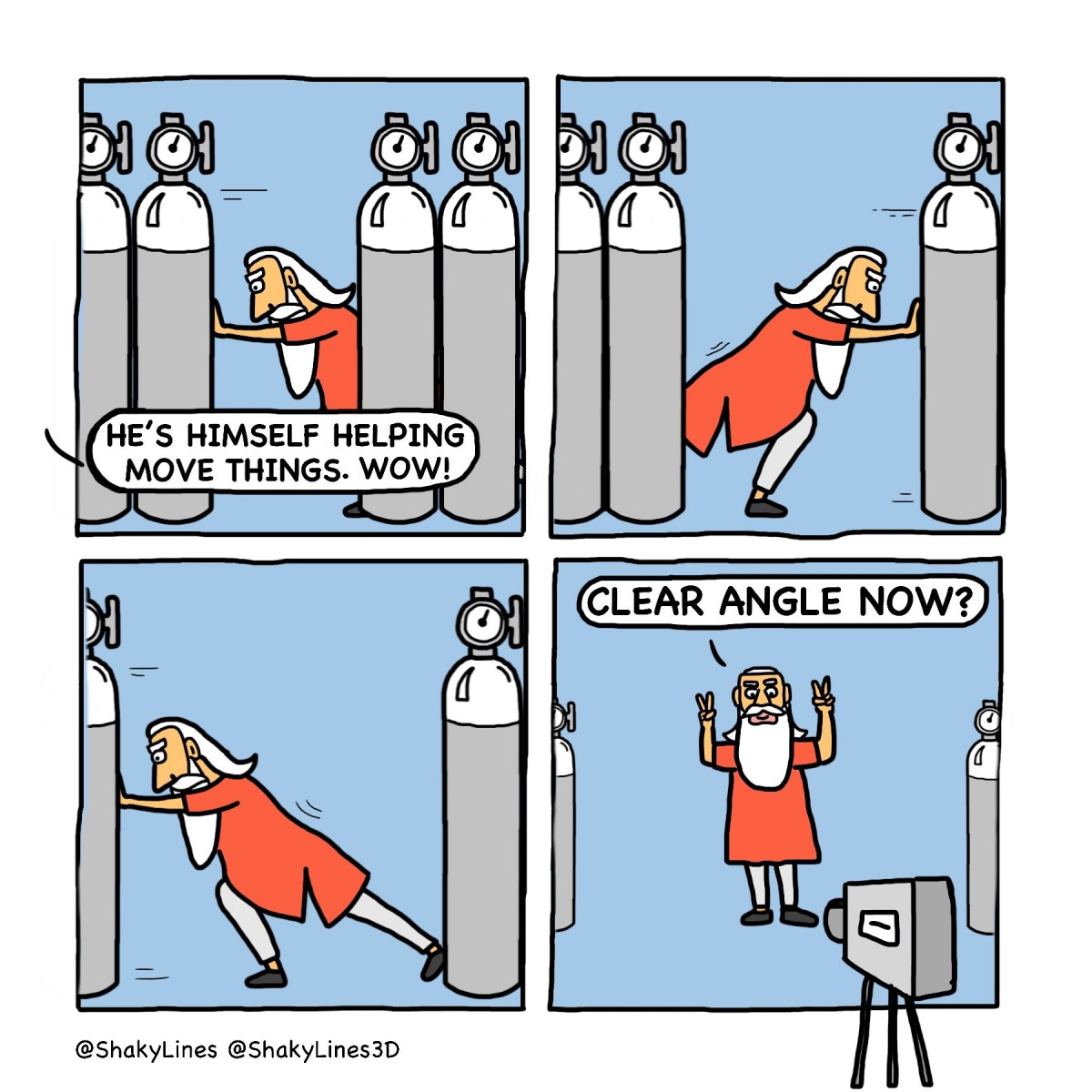 Cartoonist Remy Fernandes, @RemyFernandes15, tweeted a cartoon that brought up what was until recently the Modi government’s favourite person to blame, former prime minister Jawaharlal Nehru. 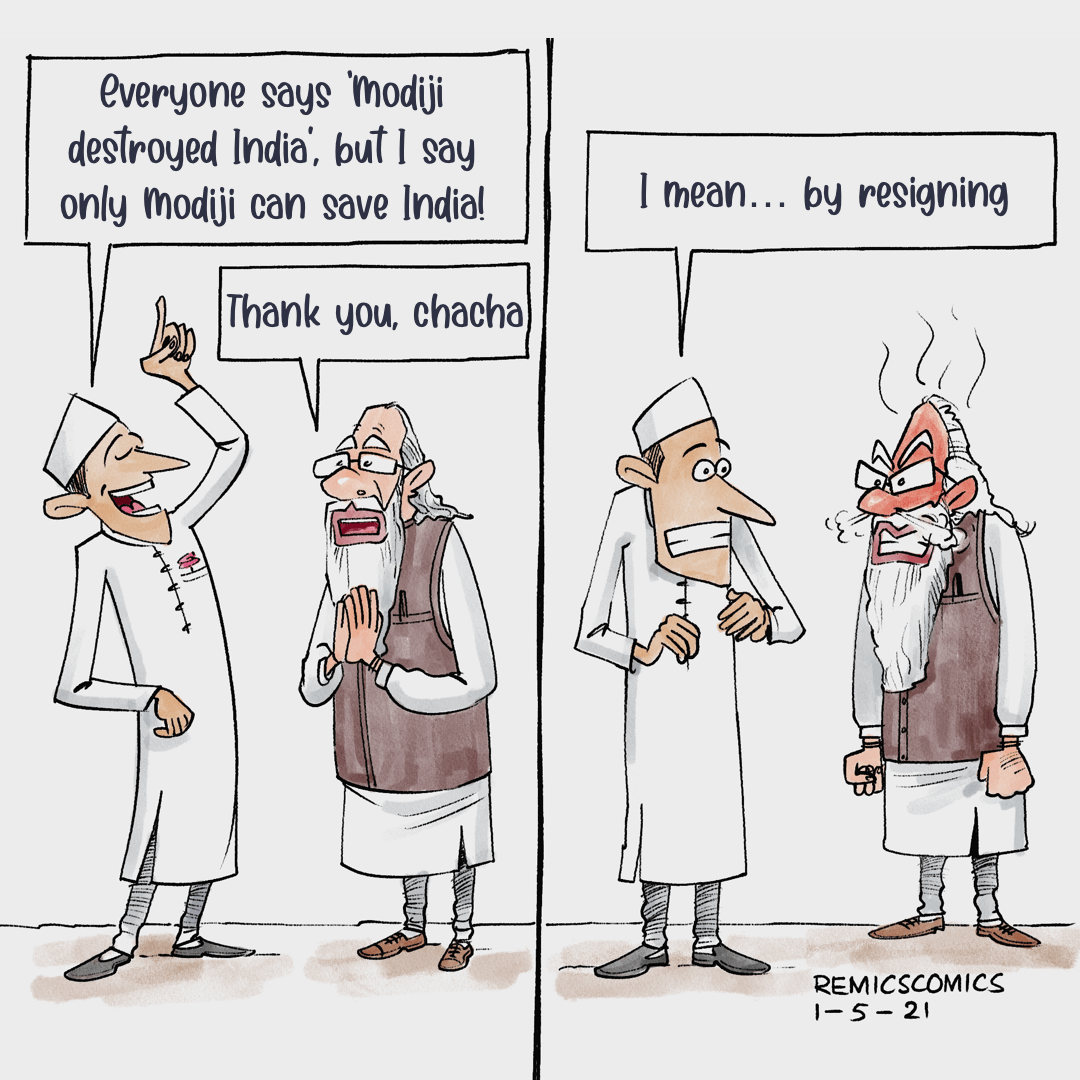 Cartoonist ‘PENCILASHAN’ (@pencilashan) took on the Centre’s often-criticised move to tout solutions for the health crisis that steer clear of science. 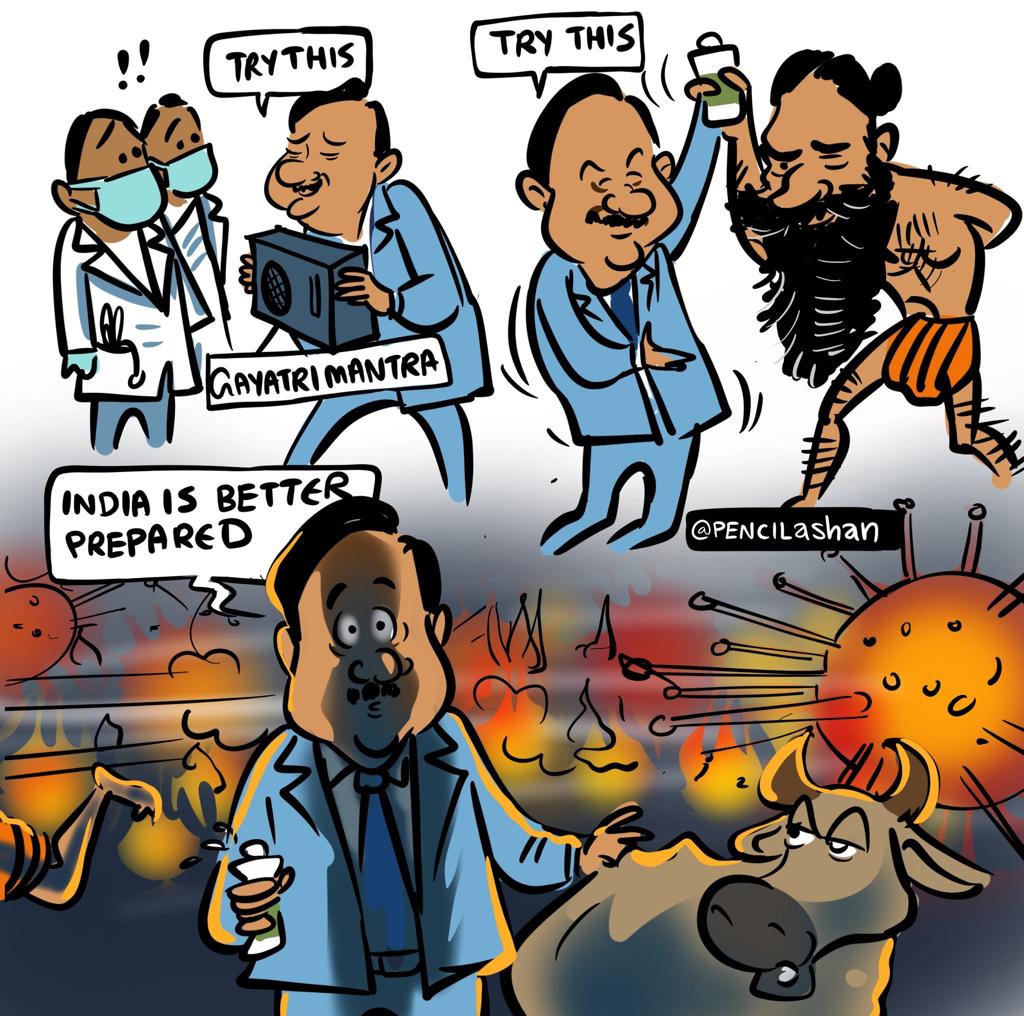 Karnataka cartoonist P. Mahmud took on the Bengal poll defeat and the COVID-19 crisis in a series of tweets, posted on his handle, @cartoonist_PM. 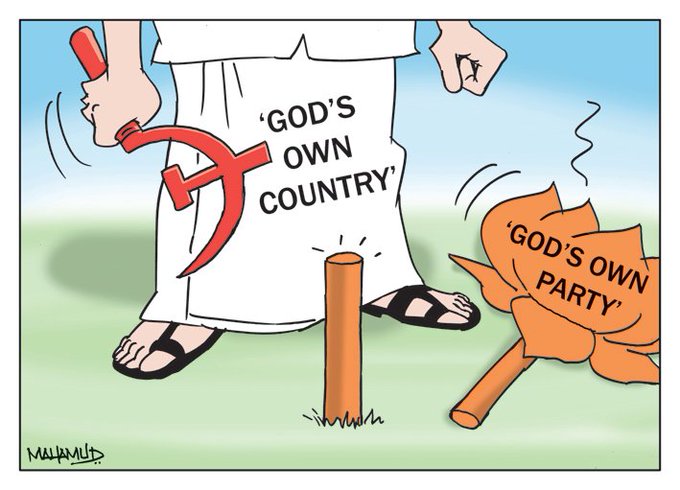 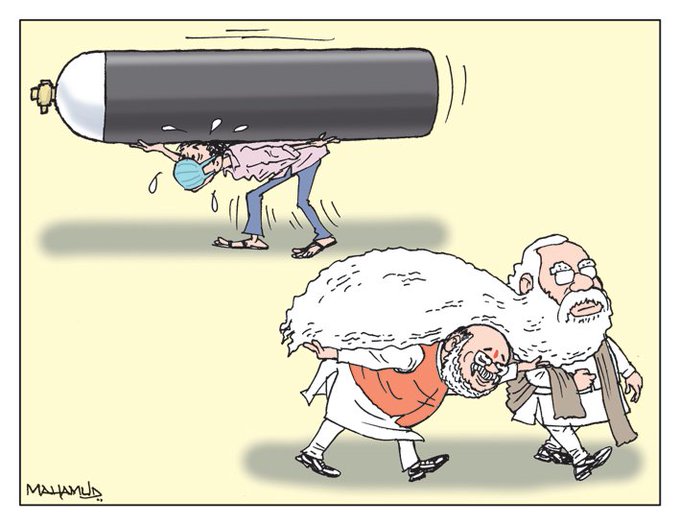 Cartoons by Sandeep Adhwaryu, chief cartoonist at Times of India newspaper, have been retweeted several times amidst the current crisis. Like others, Adhawaryu too has made veiled references to BJP’s Bengal defeat in the hands of Mamata Banerjee and mounting anger over the escalating health crisis.

Where does the buck stop? #cartoon pic.twitter.com/rmJpAfqzI2

Adhwaryu’s cartoon below strikes at the heart of the “all is well” motto the government has enthusiastically espoused.

Popular cartoonist Rachita Taneja, who runs the online page ‘Sanitary Panels’, @sanitarypanels, has in her telltale style, used straight questions to hit out at the Centre’s handling of the unprecedented COVID-19 situation. 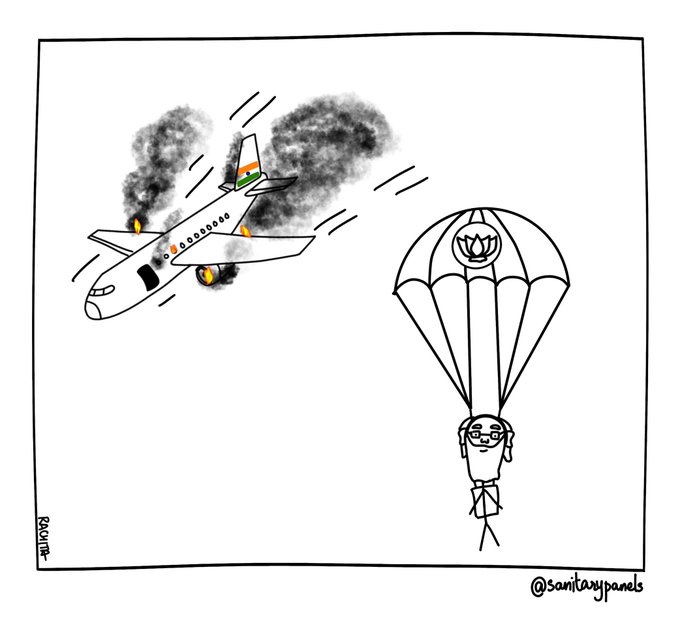 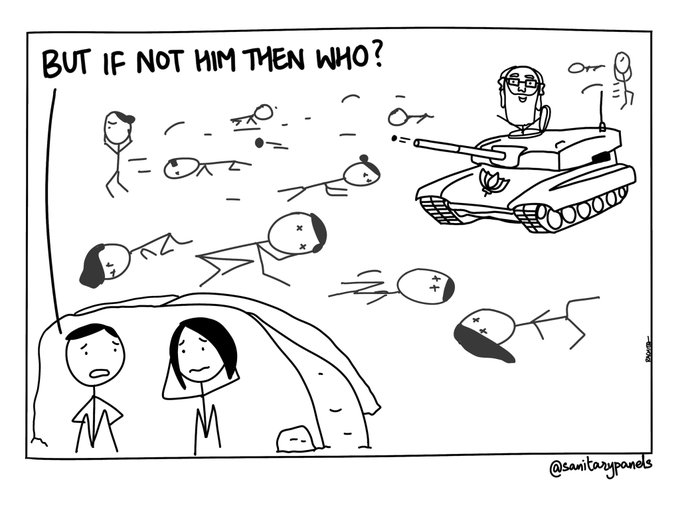 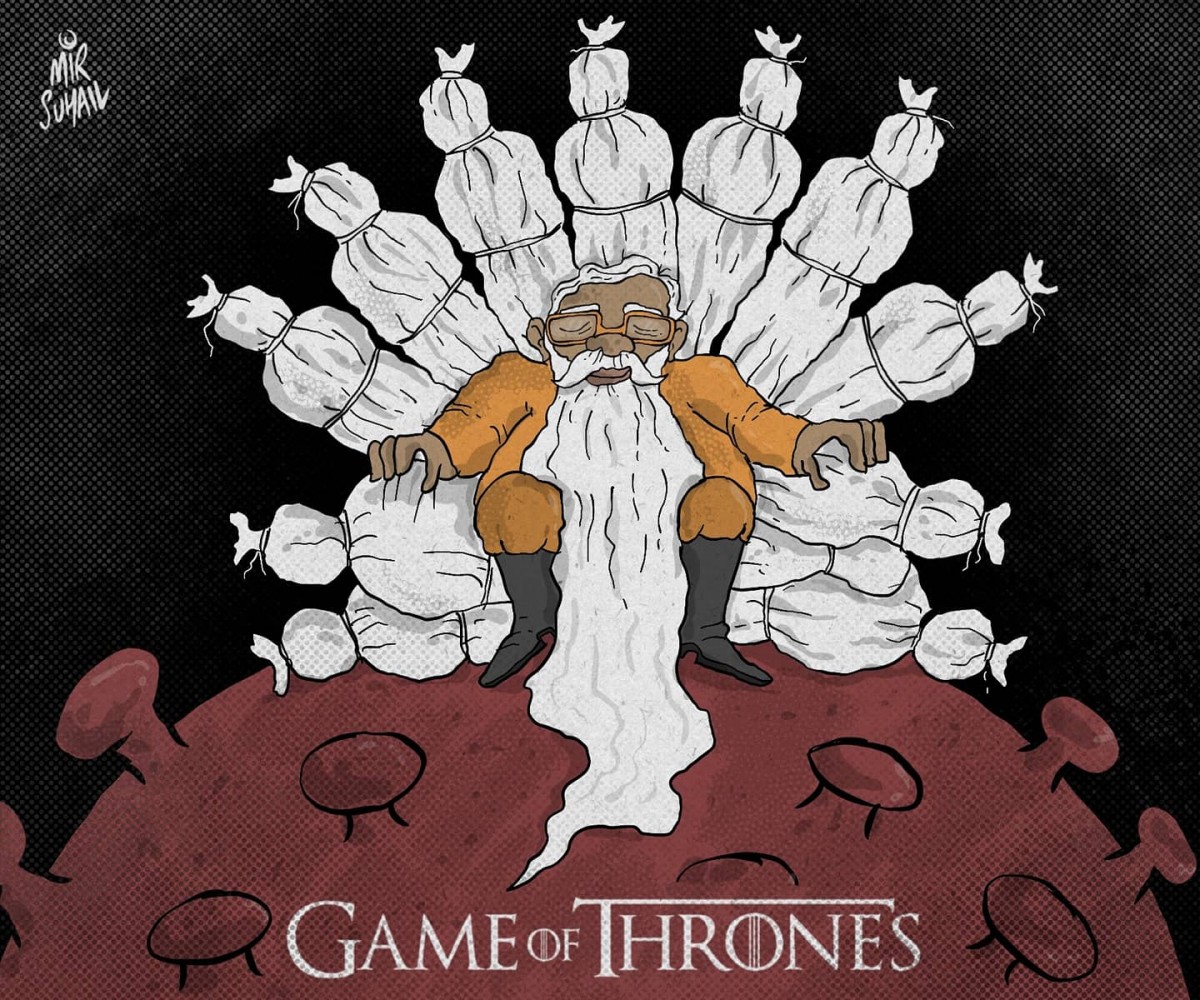 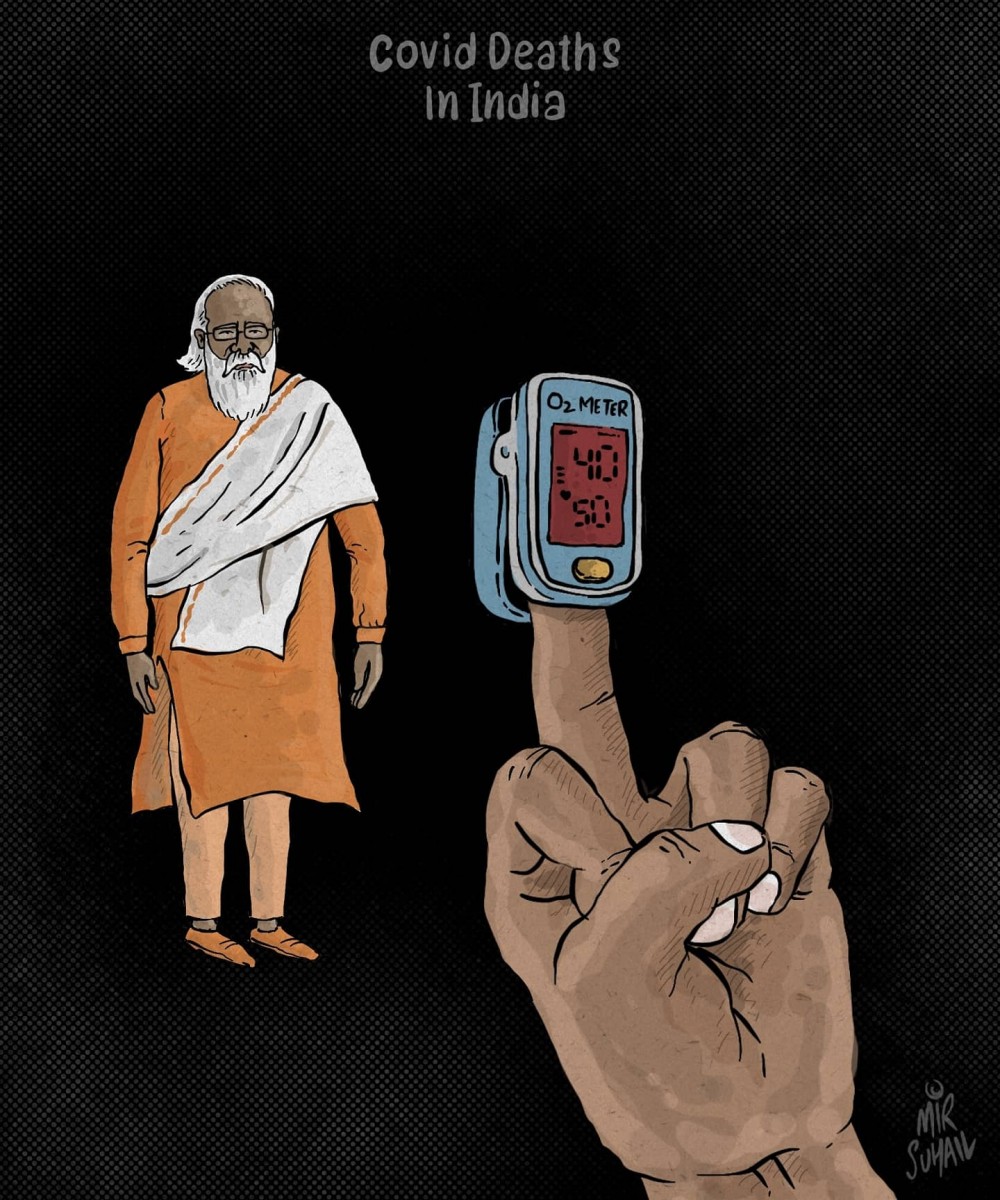 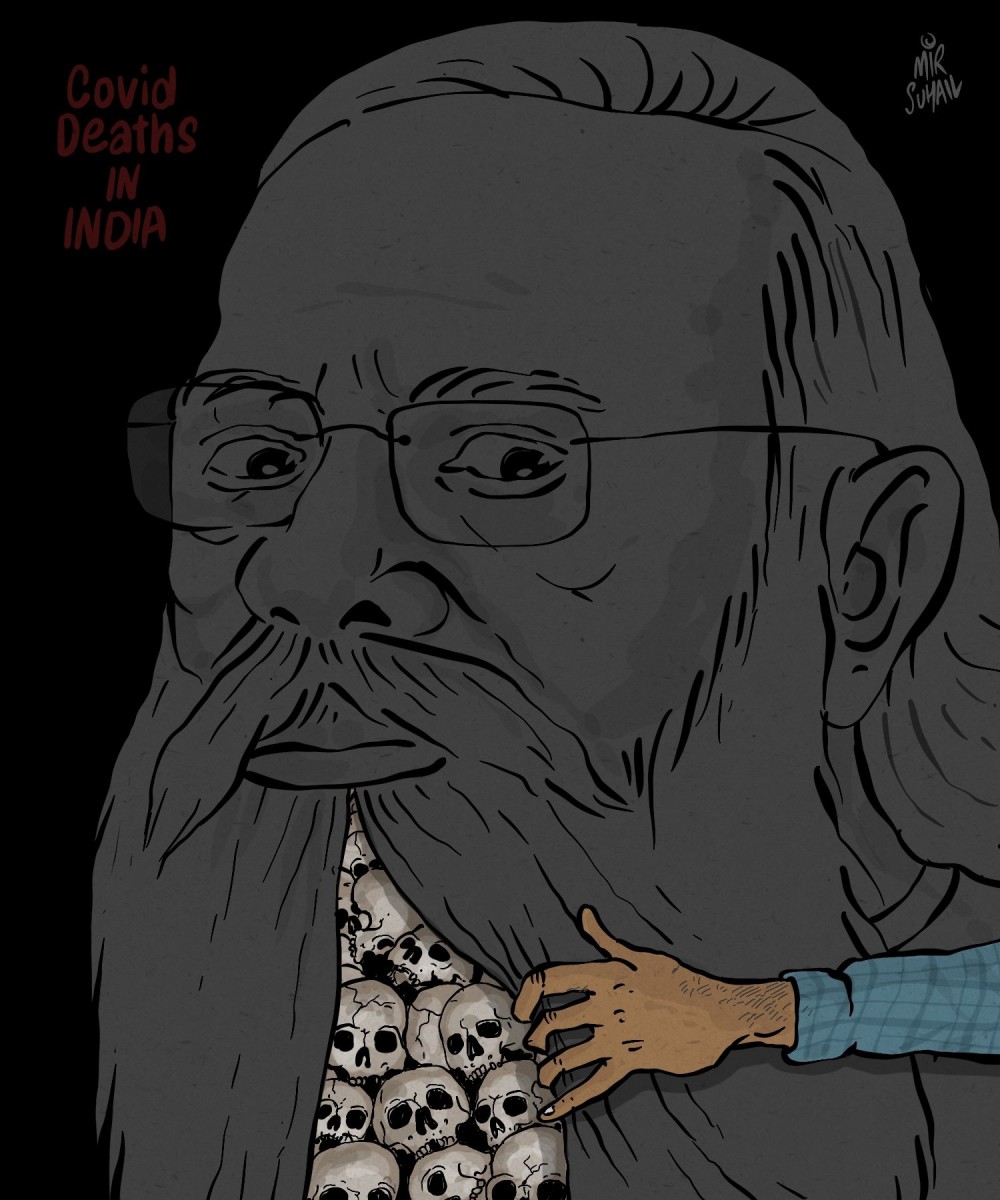 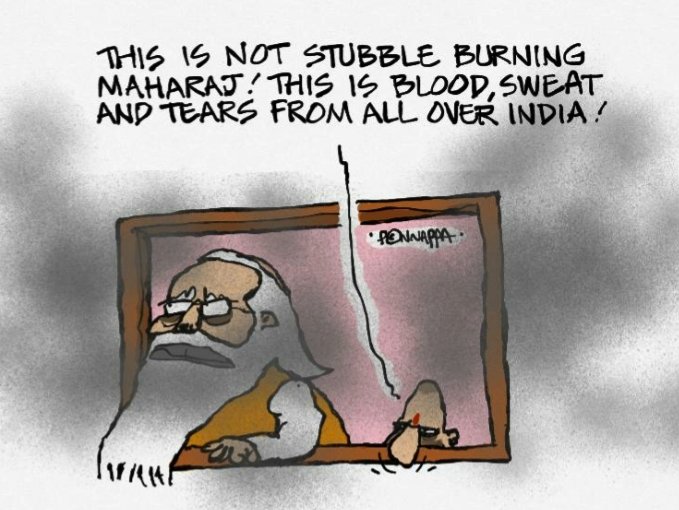 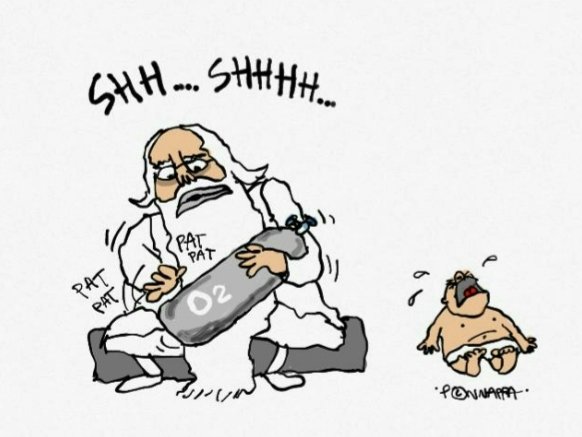 The work of Bengali cartoonists Bobby (@bob_almost) and Bob (@bobby_almost) have been shared several times on social media in the run up to and during the Bengal elections. 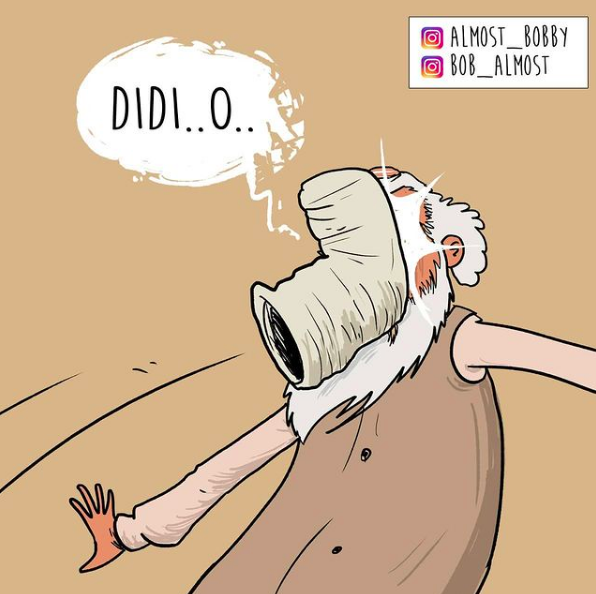 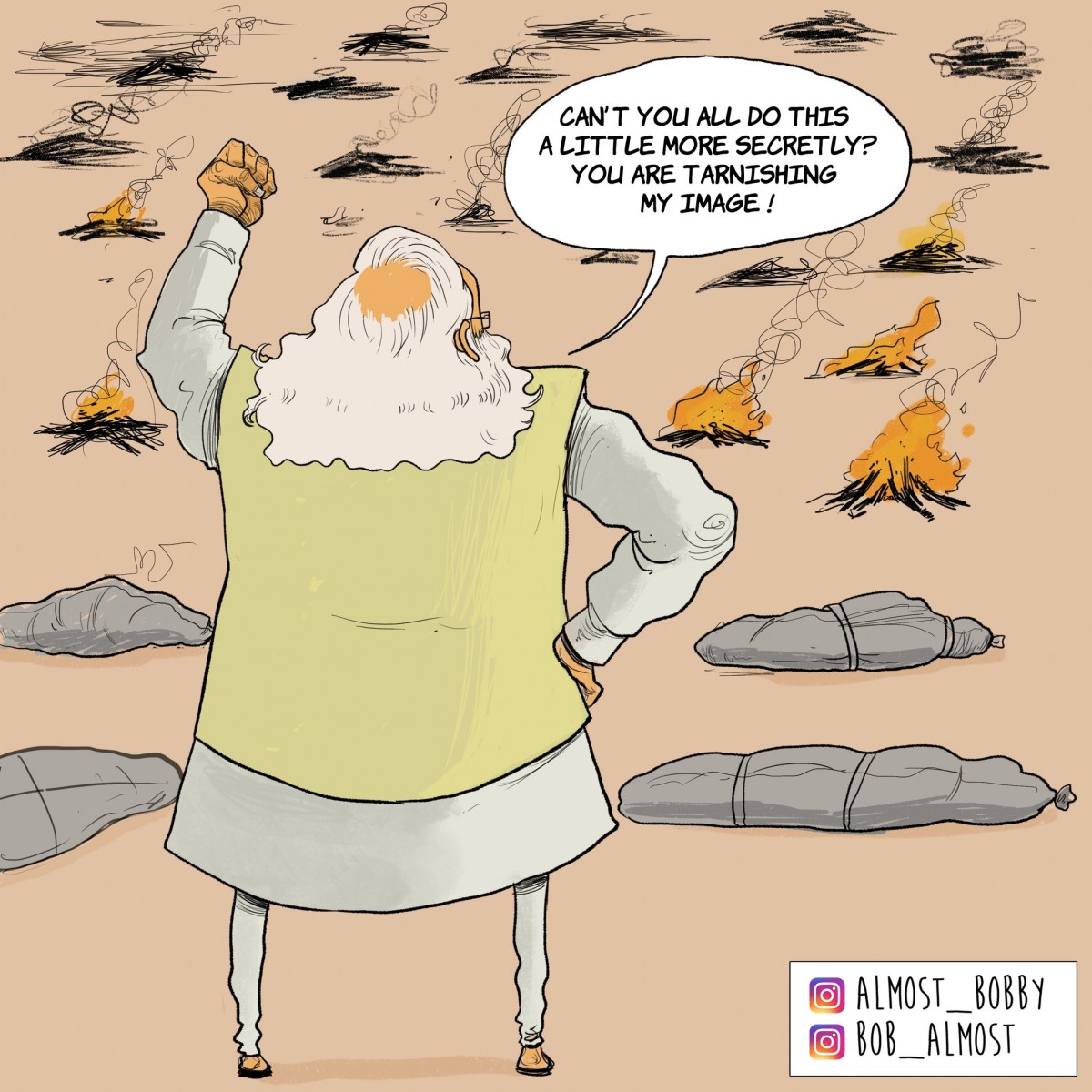 Since the piece was published, molecular biologist Shweta Karambelkar, who tweets at @Her_Quirkiness, wrote to The Wire, drawing attention to the irony of the fact that the prime minister had released a book called Exam Warriors in 2018, in which he speaks on the importance of advance preparation. The amateur cartoonist’s take on this features funeral pyres that point to a distinct lack of advance preparation by the Centre. 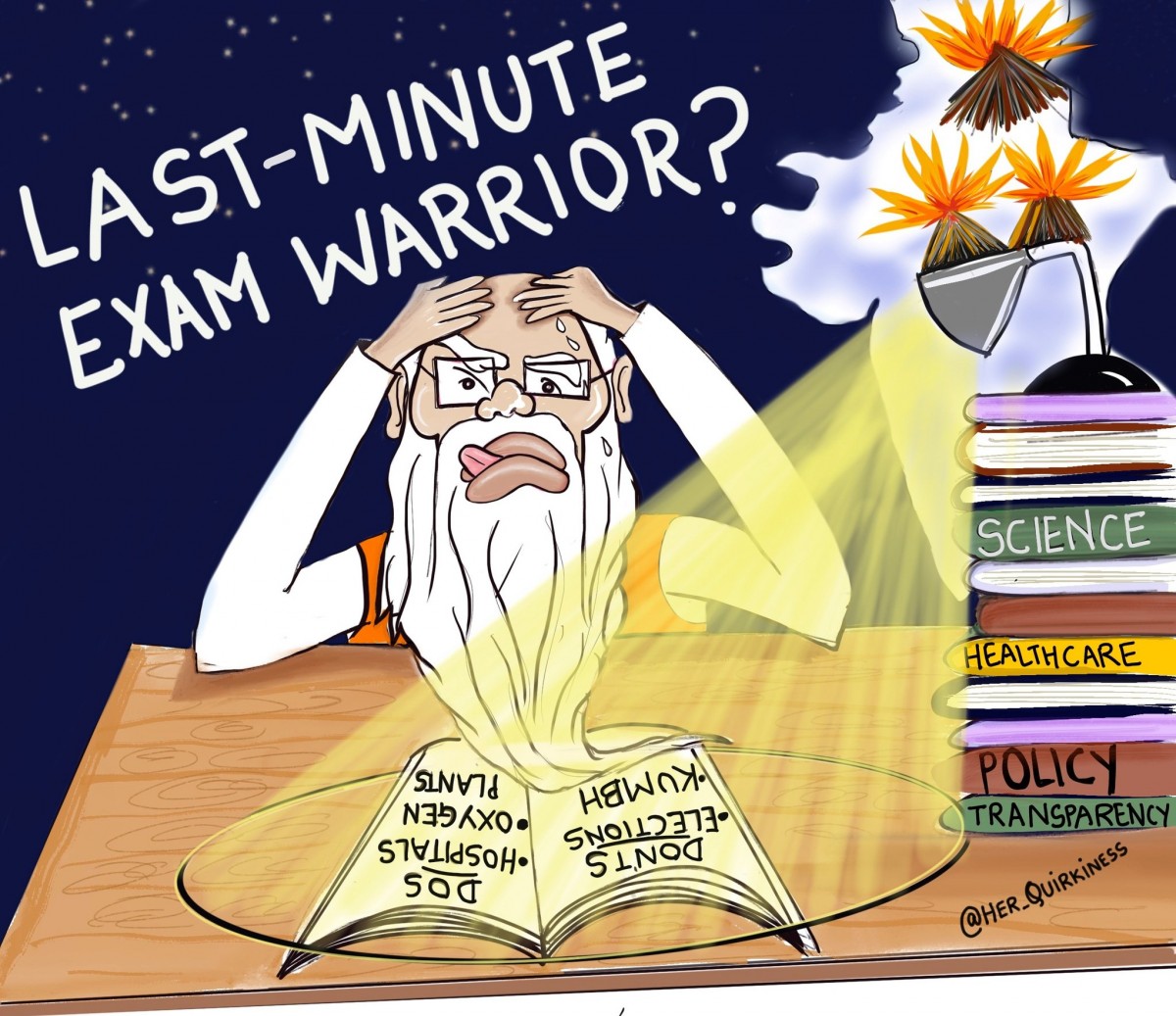 Note: The above cartoon has been added to this piece after publication.