With Archana Mahanta's Passing, Curtains Come Down on an Era of Assamese Folk Music

Archana and her husband, Khagen Mahanta ‒ who passed away in 2014, worked persistently to carry forward Assamese cultural imaginings. 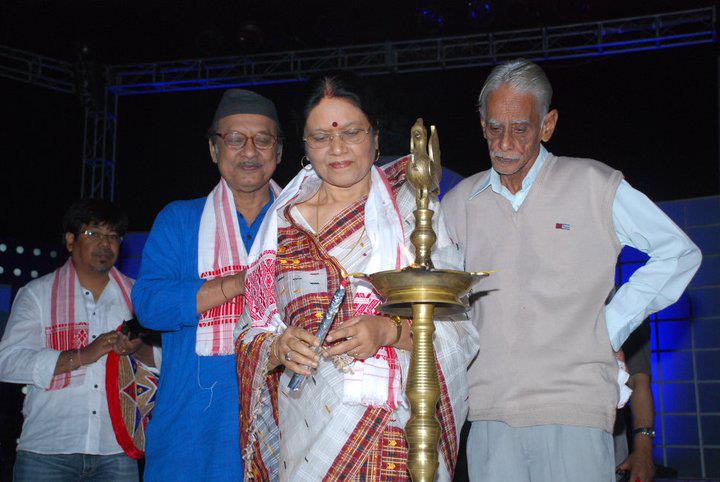 New Delhi: The curtain came down on an era of Assamese folk music on Thursday (August 27) with the demise of noted singer Archana Mahanta at a Guwahati hospital.

Archana Mahanta, 72, had suffered from a brain stroke and was hospitalised in mid-July. She is survived by her daughter Kingkini Mahanta and son Papon, a popular Bollywood singer.

Archana and her husband, Khagen Mahanta ‒ who passed away in 2014, may not be familiar names to music lovers outside of Assam, but to Assamese community, they represented a generation which worked persistently to carry forward Assamese cultural imaginings, its mores and ingenuities marked by the likes of Bishnu Rabha, Jyotiprasad Agarwala and Bhupen Hazarika. Khagen Mahanta is arguably the second-biggest name in Assamese folk music after Hazarika.

Anguished at the demise of renowned Assamese folk singer Smt.Archana mahanta.I offer my deepest condolences to her family and well-wishers in prayers for the departed soul.@paponmusic pic.twitter.com/sjsd0hFpx2

A votary of Assamese syncretic culture, Mahanta, a recipient of the Sahitya Akademi, joined hands with Hazarika, noted Bengali folk singer from Assam ‒ Hemango Biswas, among others, during the violence-ridden language movement in the Brahmaputra Valley in the 1960s to quell animosity brimming up between the Assamese and the Bengalis through the medium of music.

Together, the Mahantas contributed enormously towards the preservation of the community’s folk music, including the traditional, older forms of Bihu songs. Who in Assam can forget the duo’s old-style Bihu number, so popular through generations: ‘Sokola tengati okole nekhaba, aama ku esokol diba’ (Loosely, ‘Don’t eat the lime alone, spare a slice of it for me too’, with typical reference to local produce in folk lyrics hinged on an inherent element of teasing the lover).

The nasal undertone in the voice of the Mahantas in crooning the score was singular, something that their son Papon too inherited. In his popular Bollywood number, ‘Moh Moh ke Dhage’, it is rather acute. Here is a peek at the immortal Bihu number which was also sung by Hazarika.

Body of work that is wide and deep

Back in 2010, on getting to know that they were visiting New Delhi to feature in the India Habitat Centre’s Lok Sangeet Sammelan, I had rushed to Papon’s flat in Delhi’s Mayur Vihar to conduct an interview of the duo for The Hindu, the newspaper I was associated with then. Looking back now, I appreciate my own audacity to have done so without knowing much about their work, simply because that interview seems to be the only one of the duo in a national newspaper.

I did not have much of an idea about the span and depth of their work then, aside from being aware of popular numbers that were recorded for Assamese films. Typically, I was only familiar with their film scores like “Jun ti ula le tora ti ulabo, junok janu xudhi sai’ (when the moon lights up the sky, the stars follow; do they seek permission from the moon to sparkle?); ‘Girip garap, goli mala’ (by Archana Mahanta with Anima Deka), ‘Tumi henu karunar xagor’ (by Archana Mahanta), and of course, the evergreen number from among their songs for children, ‘Ma ami Sadiya le ja me’ (Khagen Mahanta).

In my hurry to interview them on that August morning, I forgot to call a photographer to join me in the interaction. On realising later that day that there was not a single photo of the duo in the otherwise exhaustive cultural archive of The Hindu, I dialled Papon, requesting him to mail me a photo of his parents ‘as soon as possible’. He was in a rush to catch a flight to Mumbai, possibly for a musical break, and told me, “Just find something; I have no time to look for it now.”

Fortunately, the enterprising team of The Hindu’s cultural supplement, The Friday Review, did manage to cull out a still from the Internet. Thoroughly impressed with what they had to say in that short interview, I remember telling myself then, I must visit them in Guwahati to document a deeper conversation on the extent of their work.

Their work included not just collating older forms of Bihu songs from the nook and cranny of Assam, promoting the Borgeet ‒ a form introduced by the Vasihanava saint Sankardeva ‒ but also bringing forth other forms of Assamese folk music facing extinction: the Tokari Geet, Deh Bisaroro Geet, Sah Baganor Geet, Kamrupi Biyar (marriage) Geet, Phul Kuworir Geet and Maniram Dewanar Geet. Alas, exactly a decade went by, and I could never take the time out for it! The realisation that I have forever lost the opportunity to conduct that interview was the first thing that hit me on hearing about Archana Mahanta’s demise on August 27.

During that 2010 conversation, the Mahantas underlined the changes that the Bihu numbers were beginning to register. Khogen Mahanta said:

“Bihu songs are the backbone of our culture. Things should not be static but change is acceptable only when it signifies the transformation undergone by the entire people of the state. Some of the old songs have expressions like ‘ukia ukia rail gari ahil’ (the train came chugging in). The advent of the railways in Assam brought about a change to not just those living in towns but in the rural areas too. Many farmers would hop on to the local train to reach their fields some distance away instead of cycling down. So, such words have understandably crept into the songs. But I have a problem if you sing Bihu songs with lyrics like ‘Pindhi tumi Mexi lagisa sexy’ (You look sexy in a Maxi).”

Till then, I didn’t know that Bihu numbers were also composed by luminaries of Assamese literature like Navakanta Baruah.

Khagen Mahanta spoke of travelling through rural areas to pick up Bihu songs sung by the older generation. “Sometimes, I have to stay in a village for many days,” he told me and quite proudly added that one of the gems he got from those travels was the dying form of Mahila Husori (group Bihu performance by women), which he brought to stage in 2009 with the help of wife Archana.

Being purists, they always preferred to only use traditional Bihu instruments like the taal, khol, dhol, pepa and gogona. “We use the keyboard (on stage) only when the organisers can’t afford to take the musicians along with us,” Archana Mahanta had said. What I noticed in them then was a change they were not happy about. “The loss of the distinct Bihu rhythm.”

“Take the Biju sapori (clap); it has the 8 beat rhythm unlike the usual 6 beat clap,” Khogen Mahanta had pointed out.

It was only much later that I came across a Tokari Geet of the duo that I now count as one of my favourite Assamese folk songs – ‘Samorai Kolia’, an ode to Lord Krishna. The rhythmic beauty of the song mesmerises you. A faster version is often presented on stage by Papon these days, aside from crooning it in a fusion form with Sugandha Garg for the second season of Coke Studio in 2012.

Archana Mahanta songs include those on the birds that are not celebrated by Assamese society ‒ the Kauri (common crows) and the Xalika (common Indian myna). Most likely, these songs are among the few folk numbers about birds that are commonly sighted in the Indian skies but have hardly become an inspiration for artistic ventures. Her songs on the glory of these everyday birds are but in contrast to what the Bihu songs have always glorified – the sweet say of the migratory birds Kuli (the Black Koel) and Keteki (brainfever bird or common hawk-cuckoo) ushering in Bohag, the mother of all months in Assamese annual calendar, a harbinger of hope and a good harvest.

On August 27, Archana Mahanta was accorded a state funeral. However, her demise also provides an occasion to highlight the fact that the Khagen Mahanta memorial in Guwahati’s Kalakhetra remains incomplete. Last I visited it in 2018, it was yet to be completed by the state government.

Additionally, it should be underlined that neither Archana nor Khagen Mahanta, who otherwise is widely considered the uncrowned king (samrat) of Bihu songs, were ever considered for a Padma awards, the highest civilian honours that the Central government bestows on citizens to recognise their contribution to society. In recent times, the list of Padma awardees from the state included names that generated more controversies than widespread celebrations.

Can the occasion of losing a beloved singer arouse in us an omission that needs fixing?