Liberal support of the decision by the San Francisco school board to spend at least $600,000 to remove a large mural in the building by Victor Arnautoff could prove to be a mistake. 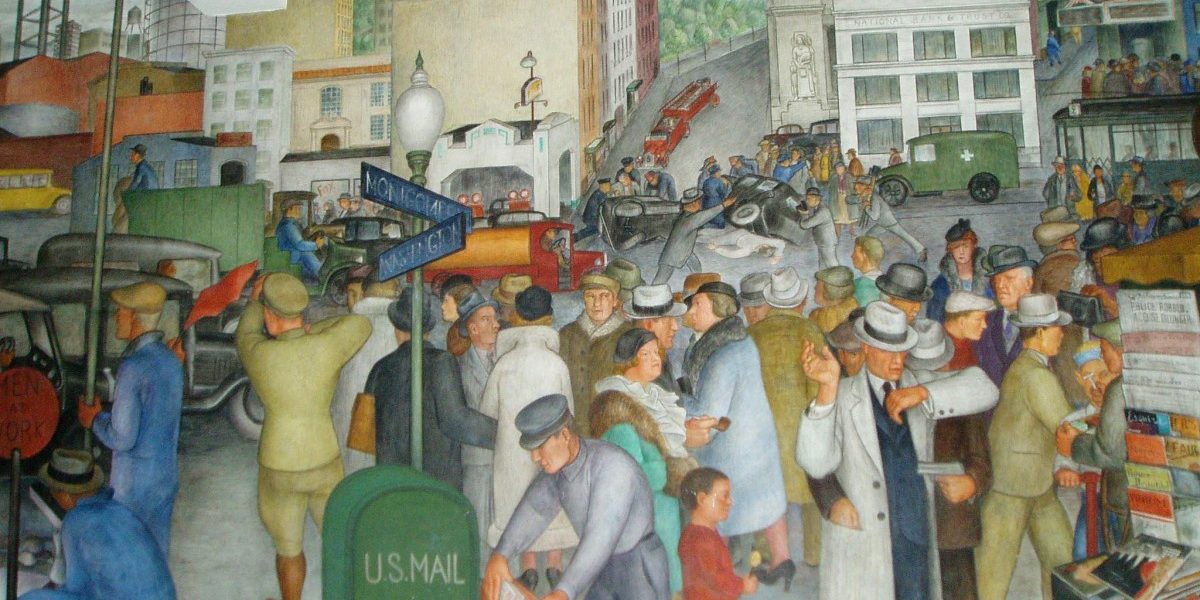 If you’re on the Left in America, you really need to savour the victories. And in the past century and a half, it was only when radicals made common cause with a broader progressive coalition that made those victories possible. That’s the story of slavery’s demise, Jim Crow’s destruction, and the labour movement’s forward march.

The 1930s Popular Front stands firmly in this tradition. Socialists, communists, and liberals working hand in hand to expose the gross inequities of American life and force the Roosevelt administration into action. While Europe descended into authoritarianism and even fascism, the Popular Front celebrated the struggles of the many against the few.

But lately, it’s the liberals who’ve soured on that partnership. A minority at even the mighty progressive voice the Nation are not only rejecting our modern-day overtures toward a new popular front, they’re looking to erase the last vestiges of the past alliance, too.

In a recent article, “Black People Don’t Need Murals To Remember Injustice,” Jennifer Wilson applauds a unanimous decision by San Francisco’s school board to spend at least $600,000 to remove a large mural in the building by Russian-American artist and communist Victor Arnautoff. The thirteen-panel work, Life of Washington, 1936, was commissioned as a part of the Federal Art Project, a New Deal program sponsored by the Works Progress Administration (WPA) to provide jobs to out-of-work artists to create public works or teach and research art.

Also read: The Wire and the World

Arnautoff, like Diego Rivera and the Soyer brothers — all of whom were also funded by the WPA — depicted social realism at a time when abstract expression dominated in the art world. Arnautoff also spent some time working as an assistant to Rivera, who portrayed Mexican working-class struggle in his murals. Later in his career, Arnautoff worked as a professor at Stanford and was eventually interrogated by the House Un-American Activities Committee for his leftist views, nearly costing him his livelihood.

Part of the mural at George Washington High School depicts George Washington on one side and then next to him, a group of white colonisers holding guns, walking past a dead Native American lying facedown on the ground. We see Washington positioned between frames with one hand pointed onto a map and another half shifting the perspective to the grey-coloured soldiers. In this frame, the land they walk upon is quite literally bolstered by the dead body of a Native American, fully depicted in colour. The imagery calls into question the ownership of land and the scale at which those in power view it: the whole world at one’s fingertip with the image of the map, and in contrast, the base relationship to the earth as both a source of life and death.

Similarly, a second portion of the mural depicts two colonisers measuring land on the estate of Mount Vernon. One man stands erect upon a rock with a measuring rope cascading out of his hand at sharp angles across the terrain. He has been endowed with the task of dividing territory. In sheer contrast, two slaves labour in a field in the background above his head. The scene considers what it means to work on this land and who is entitled to own it versus who is entitled to work on it. The multi-panelled mural’s power is amplified by its heavy use of perspective, and how it positions these figures in power as existing between two worlds in stark contrast to the oppressed — the black slaves and the Native Americans who have been tied to the land either through their labour or death.

These are such beautiful murals by Victor Arnautoff, depicting the contradictions of Washington in his treatment of Native Americans and slaves. They are also a great background to teach high school students about the tensions at the core of this nation’s history. pic.twitter.com/5uBvilfjug

The mural offers a dark and haunting counter-narrative to what many high school history textbooks still teach today: it confronts the reality of the United States, with the hope that we could make a just America a reality in the future. This combination of radical critique and hope in the possibility of collective action is a hallmark of the socialist politics Arnautoff embraced. The response from today’s liberals, however? Their main concern is that “kids are mentally and emotionally feeling safe at their schools.”

Even more absurdly, school board Mark Sanchez called the removal a form of “reparations.” “A grave mistake was made eighty years ago to paint a mural at a school without Native American or African-American input,” he said.

The other murals at the school, of course, depicting the country’s founding in a more laudatory light, can stay. There are few more absurd examples of liberal priorities today — using the language of social justice (and scarce public resources) to invent controversies and ignore the very obvious sources and consequences of exploitation and oppression in this country.

For decades, it would have been conservatives calling for this mural to be destroyed, on the basis of it slandering “our” founders. Today, it’s done by self-described “progressives.”

The George Washington High School student body consists of 92% of people of color. The total percentage of students considered “economically disadvantaged” is 60%. If this is truly about “reparations” or the students, as Sanchez insists, then instead of spending over $600,000 to destroy a work of art that has historical and artistic significance — a work that does not glorify but exposes racism, genocide, and colonialism, then the school should invest in its students, in the way that the WPA invested in Arnautoff and other artists.

Jennifer Wilson at the Nation argues that “the Arnautoff mural is part of a long tradition of well-intentioned white art that over-relies on images of racial violence to call for racial justice.” But artist intent does matter, and this statement is an oversimplification of Arnautoff’s work that is based on a gut reaction to the violence depicted in the artwork.

Also read: Graffiti in Cyprus Paints a Rich and Complex Picture of a Divided Society

In response to original protests about the mural in the 1960s, black artist Dewey Crumpler was commissioned to paint a mural in response, Multi-Ethnic Heritage, a vivid, spiritual triptych adjacent to Arnautoff’s mural. Crumpler’s process of creating the mural included input from students at the time, but according to Crumpler, “no one on the art commission really liked it because it was political. From their point of view, art should never be political . . .  ” Crumpler still believes today, as he did back then, that Arnautoff’s work should not be destroyed, as the two works are now inextricably linked. “Any disturbance of my work or Arnautoff’s work is a disrespect for history itself,” said Crumpler.

The premise of Wilson’s argument could almost have been written by a Bay Area tech “disruptor”: we don’t need reminders of the past to construct a bright future. In fact, today more than ever a reemerging Left needs reminders of our past movements and radicals and their attempt to finally create — through struggle against the bosses, not erasing “offensive” art — a just country.

As for the students, no surprise, they have a better grasp of things than their liberal minders. As one ninth-grader wrote, “The fresco shows us exactly how brutal colonization and genocide really were and are. The fresco is a warning and reminder of the fallibility of our hallowed leaders.’”

This article was originally published on Jacobin. You can read the original article here.