Spot the Real Villain in This Viral Photograph

After a decade of relentless outward optimism and secret internal wilting, we’re all finally admitting that swiping, tapping and scrolling our way through life hasn’t worked out as promised. 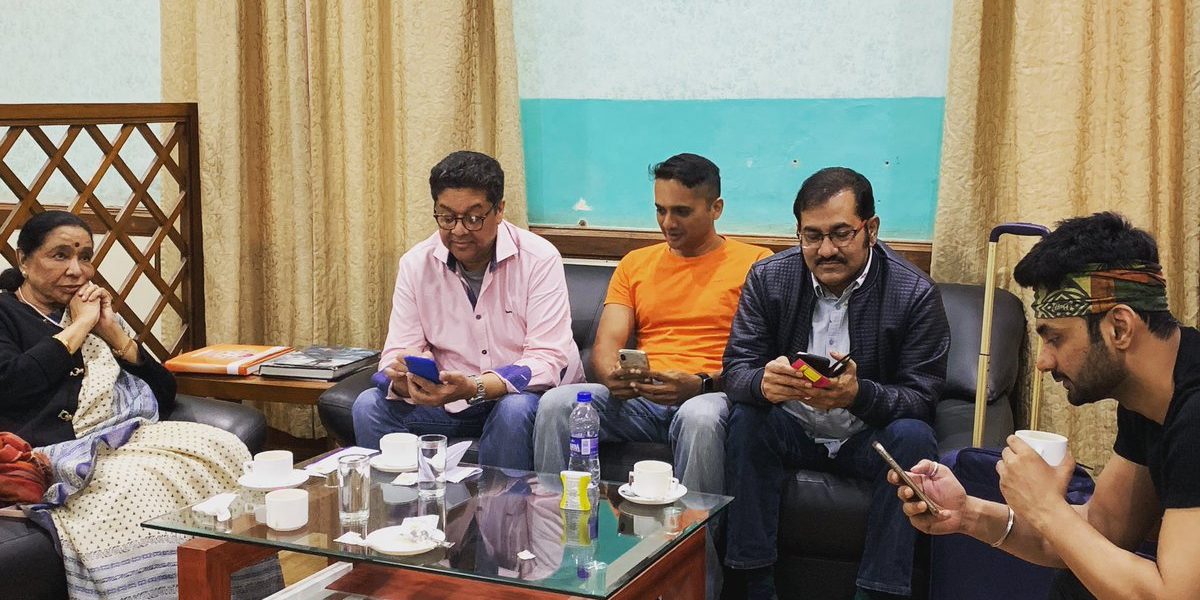 A couple of days ago, Asha Bhosle tweeted a picture of herself all alone, chin in hand, in a room full of people engrossed in their phones, saying “Such good company, but no one to talk to. Thank you Alexander Graham Bell.”

There’s no way Bell could have predicted our relationships with our phones now.

It’s 2019 and we all hate our phones but we’re always online anyway. We all hate ourselves a little bit for our digital dependency but we all also think we’re doing better than others we know.

It’s just hard to peel ourselves away from screens and apps that are literally designed to grab and keep our attention over anything else.

And Bhosle’s tweet was a reminder that a roomful of people sitting around interacting with their phones rather than each other isn’t as normal as it has come to seem.

Sure, information and access to systems of dissemination are democratised like never before, but that has come with a cost – the constant compulsion to engage that most of us now experience on the daily.

We spend our waking moments in a blue-lit haze of envy, posturing, guilty about unfinished tasks and wallowing about being left on read. Then we twitch towards our phones, find an Instagram artist who captures exactly that angst in a twee-aesthetic and are momentarily soothed.

We shake ourselves to attention and return to whatever we were doing. Guilty about the distraction but already undercutting it with acknowledgment – it’s the first step – our phones are designed to fray us so.

After a decade of relentless outward optimism and secret internal wilting, we’re all finally admitting that swiping, tapping and scrolling our way through life hasn’t worked out as promised.

Tired and wired, we ruin too easy

2018 was the year we all started to recognise that we were all feeling emotionally frayed, anxious, always mildly to wildly unhappy. And our phones were at the centre of this diagnosis. Week on week my Pocket app filled with articles that tackled social media-induced anxiety or offered ways to cut down on screen time.

Then quietly, as if they were responding to their cherished consumers’ concerns, the motherships started offering us “digital well-being”. Google launched a beta version, Apple followed soon after, Instagram introduced a feature that tells you how much time you spent on it.

The message was clear. “We care.” But the truth that has shaped the last decade went silently unacknowledged. The fact that these things are being introduced now means that our “wellbeing” wasn’t built into these systems to start with. We spend our lives on things that, arguably, until now, weren’t designed for our benefit.

They were designed for efficiency, convenience, for that most euphemistic of phrases, “building connections” and marketing too. And they did it so well that the line between product and user has been smudged non-existent.

It was about engagement – spending more time on platforms, imbibing the specific culture of each as if it were a physical space. Except nobody seemed bothered with the question “to what end?” Engagement as a goal in itself was good.

A decade ago, Zadie Smith wrote about Facebook, making observations that seem nothing less than prophetic now. Well before we knew or even imagined that Facebook would divvy up our identities and sell that data to others, effectively turning us into commodities; Smith talked about the limitations of expressing our whole selves on a platform like Facebook.

It’s impossible to squeeze our entire selves into the templates platforms offer us. We end up just posting our best selves or our happiest, we perform instead of ‘living’ and the dissonance and distress this causes is well documented by now.

We’re all stuck performing disparate versions of ourselves on various platforms, striving for a consonance that these systems aren’t built to recognise, let alone enable. The parts of us that we can’t put online might as well not exist – whether that’s a less than Instagram-able hobby or your child whose privacy you want to protect.

We’re naturally different versions of ourselves with our friends, parents, colleagues and bosses but nothing seems to induce us to squeeze ourselves into a readymade template in the way social media does.

And that template has turned out to be “worker”. That’s what most of our digital identity is about. We generate revenue for platforms by merely existing on them and using them. Even in the realm of our real work, humankind is incredibly productive and efficient, churning out more and faster than we could even imagine before.

And if our phones don’t see us as human and we see ourselves primarily through our phones, we cease to think of the needs that aren’t being met by our phones. It’s like those parts of us don’t exist. But we experience their absence as a profound loss nonetheless.

And that incomplete feeling, that listlessness and constant craving to be seen and heard feeds into the attention-sucking, gnawing digital world we’ve built.

We all know that logging off isn’t really an option. And so we’ve all constructed elaborate combinations of apps to harness our attention and get through the day. Whatever your problem, there’s an app for that.

How to build your own digital cocoon

This is the infrastructure of my daily life – timers on social media apps, a night light that kicks in around 6pm to spare my eyes more blue light, night mode that turns off all my notifications and turns my screen into a grey blah-ness from 11pm to 7am every night.

And that’s just my phone.

A regular journal, a bullet journal, a couple of colouring books occupy the shelves in my bedroom.

These are all measures that are peddled to us not as things that might help us feel better but as necessary measures to increase our productivity.

Words like “hack” and “upgrade” – which until recently described ways to improve our machines – have become our daily parlance for how to improve ourselves. These well-being measures don’t promise us inner peace. Instead they offer to help us fulfil our collective but silent aspiration to be better machines.

Also read: Our Obsession With Taking Photos Could Be Hurting Our Memory

Even Headspace – the successful meditation app – sent me what’s become my personal favourite offer, in a promotional email: “Breathe yourself rich”.

I can’t say if my apps and newfound hobbies have had any measurable, tangible impact on my life or work. But I’ve found I don’t miss my phone or even think about it when I’m with people who are also phone-less for the moment.

A friend and I swapped out banal Messenger stickers for less frequent, but comprehensive emails – and we ended up getting closer than Facebook would ever allow.

‘Digital wellbeing’, or the latest way to commodify your feelings

Quitting the internet or smartphones as an individual is hard, because it’s more inconvenient to stay off than it is to be on. That’s the network effect at its simplest. But it’s not what these digital well-being measures tell us.

Helpful though they are, most of these apps and their makers are still telling us that our listlessness is a personal problem, which needs to be solved in an individual capacity by teaching ourselves to be more efficient … and that they have the app to help you do just that.

It’s really no different from the commodification of feelings that already shapes our social media usage. The platforms that make us feel bad are now all populated with content that acknowledges our bad feelings, validating our anxiety, loneliness and other perceived inadequacies – while casually glossing over the fact that these feelings stemmed from using the platform in the first place.

All these apps are doing more of the same. They’re telling you they can make you feel better without saying anything about the source of that bad feeling. (Hint: It’s not you, it’s the system.)

What would be more helpful is if these tech firms didn’t offer us opt-in solutions to bandage what’s clearly a systemic issue. We will still have to use Twitter for work or news, and maintain an online presence for any of a thousand reasons – they displaced technologies we need to become technologies we need.

We’re never going to collectively quit the internet because life would come to a standstill. Our options can’t be automation or standstill.

So quitting isn’t the solution we deserve. We deserve tech that works for us and not the other way round.