Privacy Concerns be Damned: How the NaMo App is Being Used to Foster Modi Cult

If you have signed up for the NaMo app, your personal details are being shared with or without your consent. 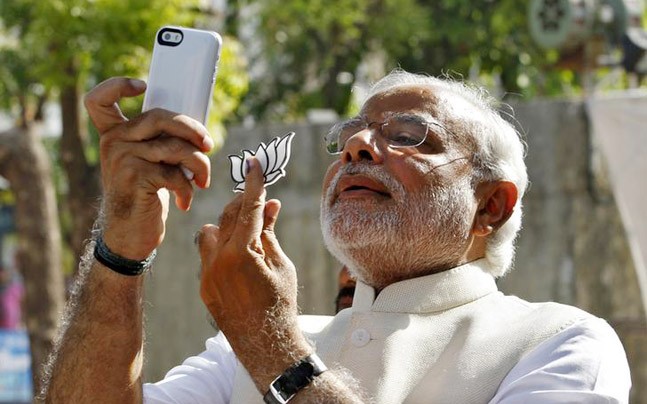 “Through my app I can reach out to 80 million people. Now in every party meeting we ensure that we open a stall and our people download the “NaMo” Modi app, so millions download it. So why should I have Twitter, I may as well have the Modi app and then post on social media,” Ram Madhav, BJP general secretary and the originator of the Modi app said in a taped interview to me for my investigative book I Am a Troll: Inside the BJP’s Secret Digital Army.

Unfortunately for Prime Minister Narendra Modi, who has not exactly been secretive about his disdain for two-way communication via press conferences, the gaping privacy holes in the carelessly designed NaMo app has ensured that data has been provided to third parties without the consent of those who had signed up.

Instead of being upfront about the transfer of data, first exposed by a French security researcher who claimed that the mobile application was sending personal information of users to a third party website – in.wzrkt.com – the handlers of the App surreptitiously changed the privacy policy of the website to accommodate for this lapse.

This raises larger questions about the principles and good faith policies practised by the PMO and is specially striking in the background of Modi’s office asking for personal data of 13 lakh National Cadet Corps (NCC) members so that he could individually interact with them. The NCC director general told the state directorates last month that the “collection of data will facilitate the interaction.. by downloading the Narendra Modi app in the cell phone of the cadets”.

So even impressionable children (NCC cadets are aged 13 years and above) are expected to sign up for the cult of Modi being fostered assiduously by the BJP.

In the same interview,  I had asked Madhav about why the BJP and the Rashtriya Swayamsevak Sangh, which frowned on personality cults and took pride in being cadre-based organisations, were fostering a Modi cult. “No, no. We are fostering the cult of Government of India work. Modi happens to be the PM. Even the RSS is developing its app through which it will put its lectures etc online”.

Meanwhile, Congress president Rahul Gandhi launched a fierce attack on Modi, calling him the “big boss who likes to spy on Indians”. The BJP hit back, calling Gandhi a “liar” and alleging that the Congress was sharing its data with organisations like Cambridge Analytica (CA).

The BJP’s usual over-reaction was evident when it got law minister Ravi Shankar Prasad to take on Gandhi, followed by information and broadcasting minister Smriti Irani taking to Twitter to troll the Congress president: “Rahul Gandhiji even ‘chota Bheem knows that commonly asked permission on Apps don’t (sic) tantamount to snooping”. Gandhi, as is his wont, ignored her while BJP’s social media army sprung into action to make her tweet viral.

However, even the Modi government needs to understand that its huge emphasis on social media and Apps as well as Modi’s recent diktat that party tickets for all Lok Sabha MPs would depend upon their getting three lakh Facebook likes, especially in the backdrop of the data mining scandal involving CA, shows that he and his government do not care about citizens’ privacy.

Worse, despite the scandal involving CA in Donald Trump’s election campaign in the US,  the Indian government has only ticked off Facebook. Modi’s emphasis on his MPs getting ‘genuine’ Facebook likes means the BJP is determined to double down on its gargantuan social media reach for the big poll battle of 2019, irrespective of charges against CA for manipulating voter preferences.

The use of data for unknown purposes by the NaMo App and also by others – the Congress too has admitted to sharing the data it collects – raises important questions related to governance. Political parties are “regulated” by the Election Commission of India but does the ECI have the technical competence to monitor the use of data by these and other Apps? Or should the telecom regulator, TRAI, be tasked with ensuring that all parties adhere to rules of the road when it comes to data security and privacy of voters/citizens?

Former chief election commissioner S Y Qureshi told me that he was “extremely concerned about the political manipulation of social media and the fact that the EC had no rules to keep an effective check on it. For example, the code of conduct applicable to mass media like newspapers and television channels does not apply to advertising on social media.

Modi’s elastic approach to the truth and the utter lack of transparency in governance have ensured that the government led by him indulges in one-way communication for which the NaMo App and social media are ideal vehicles. Modi has not addressed a single press conference in four-and-a-half years and his office repeatedly stonewalls Right to Information queries. So while a legitimate pillar of democracy – the non-embedded media– is threatened, the cheerleaders and embedded “panna pramukhs” in the media gush over their “saheb“.

So even in a democracy, if you want to reach out to the Prime Minister, you have to try using the NaMo App –  privacy concerns be damned. The government’s disregard for citizens’ data privacy was also evident in the strange justification for the NaMo App and Aadhaar by tourism minister K.J. Alphons, who said “we will even strip for a white man and a US visa but complain about giving information to the our government”.

Clearly, neither Alphons nor the government he represents understands voluntary versus mandatory. Applying for a US visa is voluntary, Aadhaar is not. And nor is the Modi app when you are an NCC cadet and you are commanded to enrol.