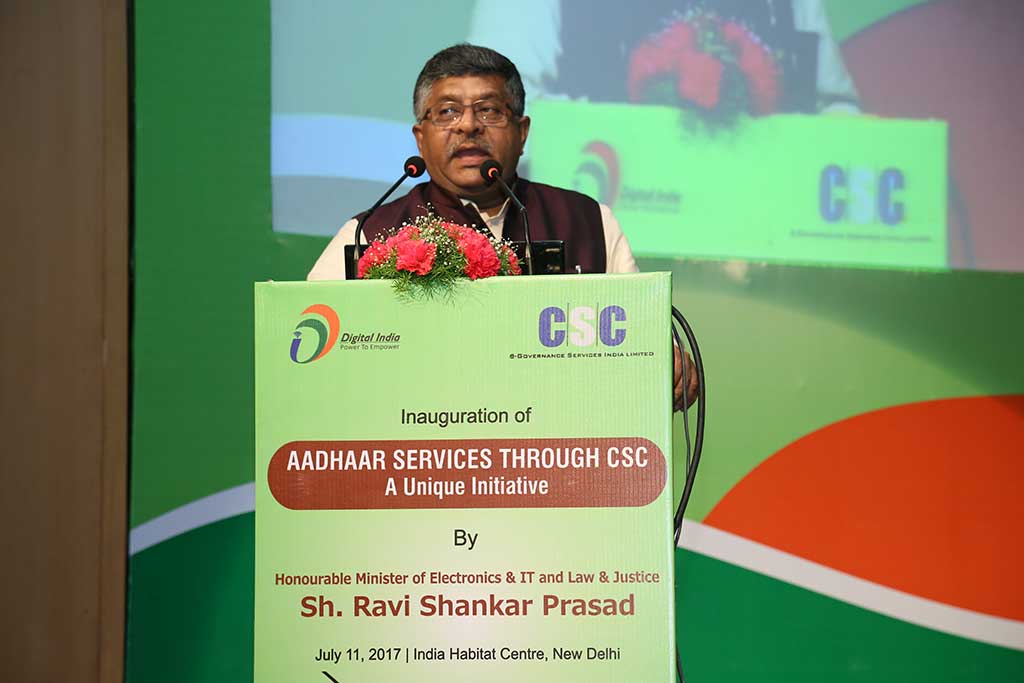 IT Minister Ravi Shankar Prasad at a CSC-Aadhaar event in 2017. Credit: CSC e-Gov

New Delhi: When the Indian government realised in 2010 that it needed to quickly scale up its Aadhaar enrolment programme for over 1 billion Indians, it turned to a trusted partner.

The ‘Common Service Centre (CSC)’ scheme – a ready network of physical ‘e-governance’ centres scattered across thousands of gram panchayats across the country – proved to be more than helpful. So helpful in fact that by the end of 2013, thousands of CSCs that helped in enrolment were converted into permanent registration centres for “Aadhaar cards” to help with a people of Aadhaar-related services such as updation.

By February 2018, of the roughly 119 crore (1.19 billion) Aadhaar numbers generated by the Unique Identification Authority of India (UIDAI), some 18 crore (180 million) had been generated by enrolment centres at CSCs alone. Total enrolment figures by CSCs are even higher at 26 crore (260 million), according to latest data.

This relationship – and with it, a sense of convenience for millions of Indians who used CSCs not to just enrol but also avail of other Aadhaar services such as demographic and biometric updation  – is now deteriorating.

This week, the UIDAI formally refused to renew the registrar agreement of CSC e-Governance Services India Limited, the special purpose vehicle under the IT ministry that manages the implementation of the CSC scheme. In the same letter, dated February 6, 2018, it also refused to provide permission for centres under the CSC network to provide Aadhaar services.

The reason? The UIDAI says that in view of the “enormous number of complaints of corruption and enrolment process violations against Aadhaar enrolment/Update centres under CSC e-Gov, it may not be possible to extend/renew MoU with CSC.”

This, government officials say, is remarkable because it admits that the UIDAI was in wrong in trusting the Aadhaar enrolment programme with the CSC network, many individuals centres of which are run by private individuals.

In particular, over the last year,security and privacy issues over the biometric identification scheme can be traced back to village-level entrepreneurs (VLE) who are key stakeholders within the CSC scheme. In rural and less-connected areas across the country, local VLEs set-up and run CSCs which are access points to a wide array of essential e-governance services. 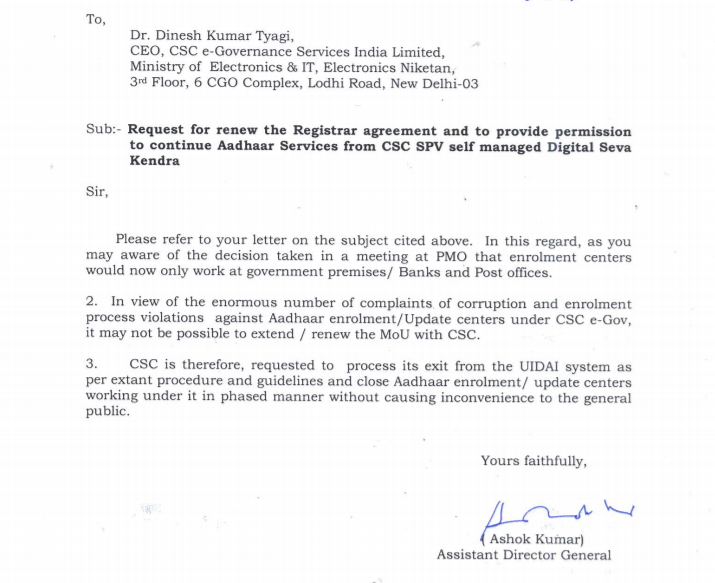 A copy of the letter sent by UIDAI to CSC e-Governance.

These violations range from the significant (the Aadhaar data racket exposed by The Tribune fingered the problems with VLE operators looking to make money), to more smaller violations of privacy (the personal Aadhaar details of cricket captain M.S. Dhoni were made public by a VLE operator after the CSC e-gov handle publicly tweeted it).

On top of this, over the last few years, thousands of complaints of rampant corruption and bribery have made their way into the public domain, as both private enrolment partners and VLE operators who run CSCs illegally charge for Aadhaar services.

Poor security hygiene by private enrolment partners also has implications for national security and the Modi government’s central promise of using biometric identification to reduce leakages within India’s welfare system. As The Wire has reported, unscrupulous behaviour by private enrolment partners allowed a Pakistani spy and ‘Lord Hanuman’ to not only gain Aadhaar numbers but also link it to an LPG connection.

Also read: A Pakistani Spy and Lord Hanuman Walk Into an Aadhaar Centre. What Does the UIDAI Do?

“Cutting off common service centres shows the structural problems within the private enrolment system. They used them to scale up the Aadhaar programme and now find that they can’t control them and are therefore chopping that limb off,” a former National Informatics Centre (NIC) official, who declined to be identified, told The Wire.

What further complicates matters is a UIDAI decision in September 2017 to ensure that all enrolment (even those by private agencies) shift to government or local municipal body premises. The move, at the time, was an attempt to curb cases of overcharging by private and VLE operators. The decision, which was backed by the prime minister’s office, was motivated by the thinking that less fraud would happen in the Aadhaar enrolment process and with other Aadhaar services if it came under the direct supervision of authorities.

It was not clear to what extent this directive also applied to CSCs who may not be able to shift to post offices or other local government premises.

Senior officials of CSC e-Governance Services India Limited are upset with the UIDAI and have currently petitioned the Aadhaar agency to reconsider their decision to not renew the registrar and biometric services contract.

“They’re making our life hell,” a senior CSC e-Gov official, who declined to be identified, told The Wire.

“They are the ones who first came to us years ago asking us to push enrolment amongst CSCs, convince VLE and other operators to buy biometric equipment and now they want to wind it up,” the official added.

While enrolments are becoming less important these days, CSCs also offer other Aadhaar service such as mobile number updation and plastic Aadhaar card printing. Latest data shows that the total number of “demographic and biometric updates” done by CSC PEC (permanent enrolment centres) over the last five years are around 5.6 crore (56 million).

There are currently 11,280 CSC PECs across India.  The UIDAI, in its letter to the overarching CSC agency, has stated “it is requested to process its exit from the UIDAI system per extant procedure and guidelines and close Aadhaar enrolment/update centres working under it in phased manner without causing inconvenience to the general public.”

CSC officials say it is unclear how this can be done without inconveniencing the general public. In Andhra Pradesh, media reports indicate that vast swathes of rural areas are being under-serviced by Aadhaar service centres for a wide range of reasons.

While there are the usual technical and procedural issues, reports also indicate that common service centres have stopped functioning, causing widespread inconvenience and hassle.

Senior CSC officials indicated that if centres (or digital seva kendras as the Modi government calls and has informally branded them) will exit, it will cause inconvenience for millions while also affecting the employment of VLEs.

“Around 30 to 40 crore Indians have not updated their mobile numbers to their Aadhaar profiles. Where will they go now? In many areas, CSCs are the only access point for Aadhaar services. We are getting hundreds of angry calls a day from our VLE operators. Will post offices now take up the slack?,” a senior official told The Wire.

“There are people who invested in the biometric equipment to offer Aadhaar services. What should they do with that? Some can perhaps shift out out from CSC to government premises. Many cannot,” the official added.

Indeed, the timing of the UIDAI’s move is puzzling. It was only in August 2017 that Aadhaar chief announced a new partnership with the nodal CSC agency to start a “mobile van that would enrol people who are unable to travel to Aadhaar services”. This initiative was flagged off by IT minister Ravi Shankar Prasad, who has in the past also praised CSCs for their role in providing employment in rural areas as well.