On Monday, Twitter offices were raided by Delhi Police over tagging Sambit Patra's tweet with the dubious label.

New Delhi: After BJP spokesperson Sambit Patra’s May 18 tweet on the alleged “toolkit” was tagged as “manipulated media” by Twitter, BJP national vice president and former Chhattisgarh chief minister Raman Singh’s tweet on the same has also been labelled in a similar manner by the microblogging site.

It is not known exactly when Singh’s May 18 tweet was given the dubious label, as many Twitter users only began pointing out the same on Tuesday, May 25. The development assumes significance as on Monday, the Delhi Police had raided Twitter offices in Delhi and Gurgaon over tagging Patra’s tweet as “manipulated media”. 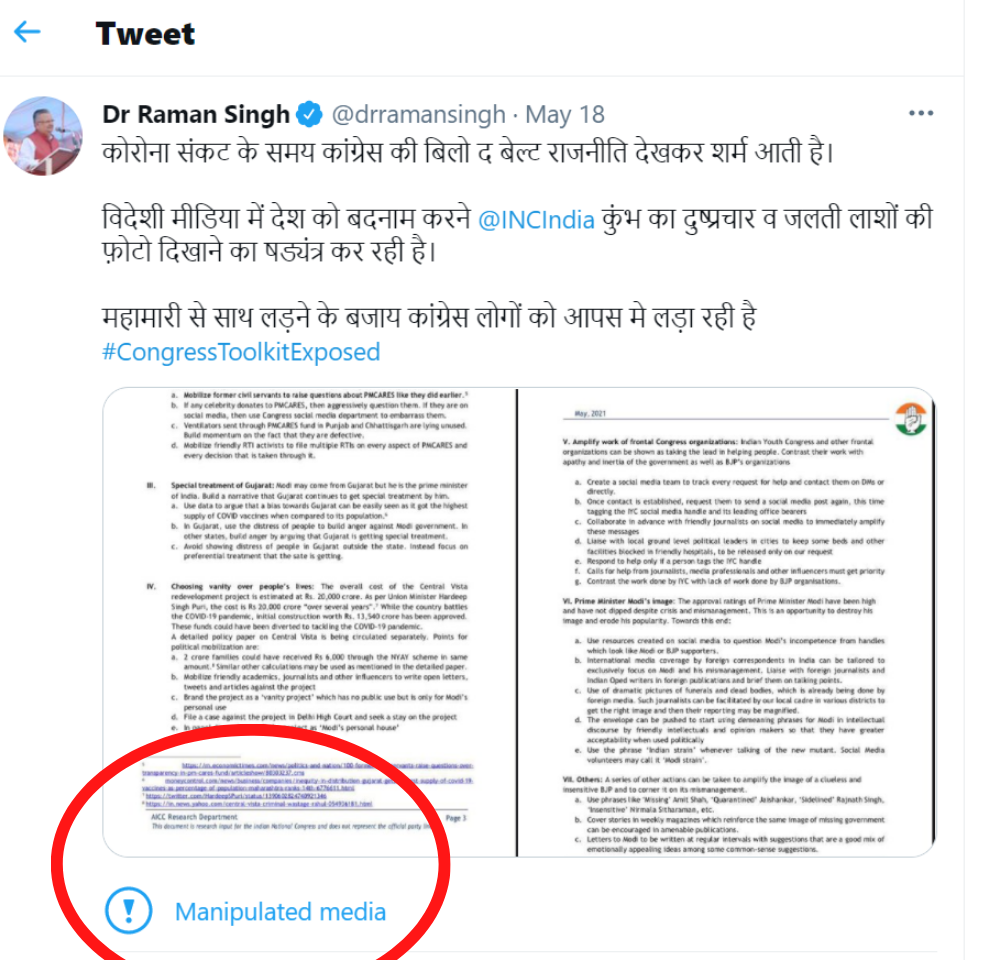 Along with several top BJP leaders and Union ministers, Singh on May 18 had tweeted an alleged “toolkit” by Congress and accused it of taking advantage of the pandemic in the country and had hatched a conspiracy to discredit the country in foreign media.

AltNews had earlier reported that the “toolkit” was made on forged Congress letterhead.

While BJP president JP Nadda and ministers like Smriti Irani, Piyush Goyal and Hardeep Singh Puri amplified the BJP campaign via their use of the centrally designated hashtag #CongressToolkitExposed, their tweets – by design or coincidence – refrained from sharing the controversial document made on forged letterhead.

On May 19, an FIR was registered at Civil Lines station police station in Raipur against Patra, Singh and others after the Congress accused BJP leaders of forging the letterhead of the All India Congress Committee (AICC) research department and printing “false and fabricated” content. The complaint was lodged by the students’ wing of the Congress party, the National Students’ Union of India (NSUI). The FIR mentioned that BJP leaders were spreading fake news and “promoting enmity between classes” in the toolkit row.

The Raipur city police on May 21 issued a notice to Singh, asking him to remain present at his residence on May 24 for recording his statement in the ‘Covid toolkit’ case. The police wanted to know if the Twitter account @drramansingh belonged to Singh, from where he got documents titled as ‘AICC Research Project’ or ‘Cornering Narendra Modi and BJP on Covid management’, and the communication between other accused regarding the use of the hashtag “CongressToolkitExposed” on social media.

The Raipur police on Monday, May 24, recorded the statement of the BJP leader in the case.

Taking exception to the “manipulated media” tag by Twitter, the Union government has issued notices to the microblogging site to remove such tags, stating that it amounted to prejudging on the part of Twitter regarding the veracity of tweets when law enforcement agencies are already carrying out an investigation into the authenticity of “toolkit” shared by BJP leaders. It said that the aggrieved party, Congress, had already lodged a complaint with police and the matter is under probe.

Citing sources, a report by The Hindu on May 21 said, “The Ministry of Electronics and IT has written a strong communication to the global team of Twitter, registering its objection to the use of ‘manipulated media’ tag on certain tweets made by Indian political leaders with reference to a toolkit created to undermine, derail and demean the efforts of the government against the COVID-19 pandemic.”

“Such tagging by Twitter appears prejudged, prejudiced and a deliberate attempt to colour the investigation by the local law enforcement agency. The Ministry has termed such unilateral action by Twitter an effort to influence the fair investigation process and a clear overreach, which is totally unwarranted,” the report added.

According to Twitter policy, content may be labelled as “manipulated media” or in some cases removed, if there is a reason to believe that media, or the context in which media are presented, are “significantly and deceptively altered or manipulated”.

“…We may label Tweets containing synthetic and manipulated media to help people understand the media’s authenticity and to provide additional context,” Twitter had said while announcing its manipulated media policy.

Meanwhile, the Congress party on Tuesday demanded that Twitter affix a “manipulated media” tag to tweets of several Union ministers for allegedly spreading false and malicious propaganda against the party.

Surjewala said, “It is a matter of fact that people tend to believe ‘true’ and take on face value, any information that is put up directly by a Union Minister of the Government of India through his/ her official/ verified Twitter account.”

“Hence, it becomes all the more imperative to tag, ‘manipulative media’ (sic), on all such tweets made by Ministers of the Government of India on the above referred forged toolkit document created by the BJP,” he said in his complaint.

“It is reasonable to expect that the aforementioned individuals will be dealt with the same yardstick as applied in other cases where the Twitter platform is misused to broadcast forged and fabricated material…,” he also said.

“Twitter has tagged the alleged toolkit shared by Dr. Raman Singh as manipulated media now. The Sangh lesson of repeating a lie a thousand times and it becomes the truth won’t work anymore,” Baghel was quoted as saying by India Today.