ISPIRT, a software product lobby organisation , has come under fire by Aadhaar critics for allegedly orchestrating an online trolling campaign.

New Delhi: As bizarre as this may sound, one of the founders of the Indian Software Products Industry Round Table (iSPIRT) – an influential think-tank closely associated with the Unique Identification Authority of India (UIDAI) – Sharad Sharma, is battling allegations of trolling anti-Aadhar campaigners through fake Twitter profiles.

Kiran Jonnalagadda, one of the founders of Internet Freedom Foundation (IFF), has alleged that a number of fake profiles started to troll him online earlier this month in response to his criticism of Aadhar on Twitter. Surprisingly, he said, one of the profiles  –@confident_India – which trolled him was apparently operated by Sharma, considered highly influential within the IT and start-up industry and a governing council member of iSPIRT.

In 2013, a group of volunteers working with NASSCOM founded iSPIRT to represent the software products industry independently. It is widely known that many of these same volunteers also helped the UIDAI develop much of the initial Aadhaar infrastructure and ecosystem. According to Forbes India, iSPIRT helps Indian software product companies “draft and take policy proposals to government officials; create reusable ‘playbooks’ from successful companies that can be applied by others; and create ‘self-help communities’.” It aims to facilitate Indian software product companies, which build affordable and innovative technologies, get a footprint in sectors like health, education, infrastructure and create conditions so that they get an equal platform to compete with big multinationals.

In this mission, iSPIRT believes that Aadhaar-based technologies, which Indian software product companies may create, could help the Indian software product industry gain an advantage over multinationals, which may be skeptical about using Aadhaar. In other words, iSPIRT, one of the biggest advocates of Aadhaar, sees a commercial advantage to the increasing use of Aadhaar for many of the entrepreneurs associated with the Round Table. To this end, iSPIRT runs two initiatives – ProductNation and IndiaStack, a collection of open APIs for technology infrastructure projects like UPI and Aadhaar.

While the mission may sound fine, many of the Aadhaar advocates within iSPIRT have had to face questions from civil society, most of which have to do with the suspicion that Aadhaar could compromise online privacy. This, over the past few months, has led to heated social media battles between iSPIRT and anti-Aadhaar campaigners.

However,  the debate took a darker turn when Jonnalagadda uploaded a video showing that the @Confident_India Twitter handle could be traced back to Sharma’s personal mobile phone number on Twitter. Sharma, has since then, apparently changed his number.

“It was only when I started to grow suspicious of the handle that I thought of using Sharma’s phone number to verify the account,” Jonnalagadda tells The Wire.

In an article  – “Inside the mind of India’s chief tech stack evangelist” – where he narrates the events, he says “a flurry of newly created Twitter trolls accounts began heckling me about Aadhaar”.

Around 10 such handles started making unprovoked attacks on Jonnalagadda and another founder of IFF, Nikhil Pahwa, accusing them of being guided by “greed, profit, and deceit” for being in the “#AntiAadhaar brigade.”

“All these did not perturb me as it was a part of routine arguments,” says Jonnalagadda.

However, in what he calls a “lightbulb moment”, he had the first inkling that Sharma could be operating the account of @confident_India through this thread: 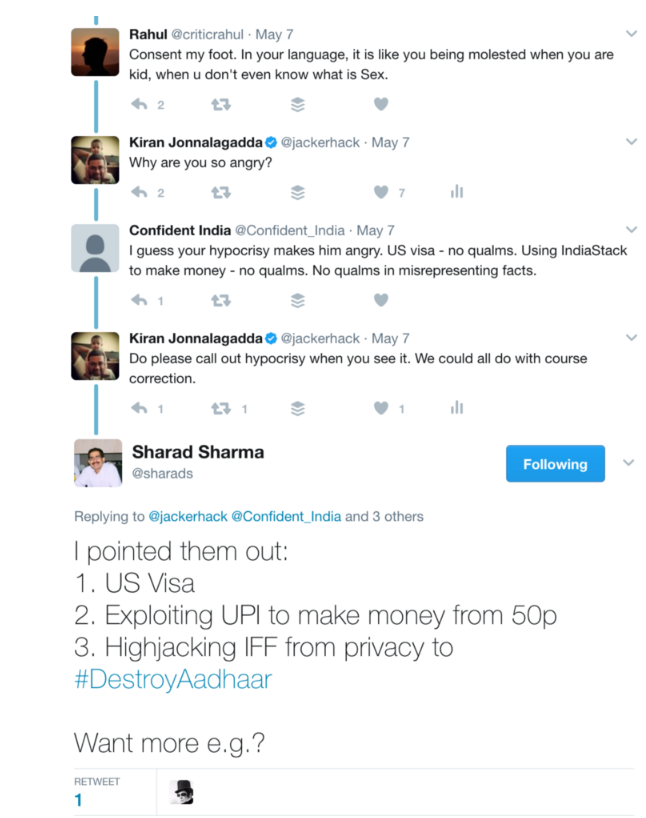 “Sharad Sharma’s original account doesn’t follow any of these people on the thread. The conversation would not have shown on his timeline. Yet both @confident_India and Sharad Sharma made the same argument,” says Jonnalagadda.

Then, he says, Sharma gave it out. A question addressed to Sharad Sharma ended up being answered by @confident_India. 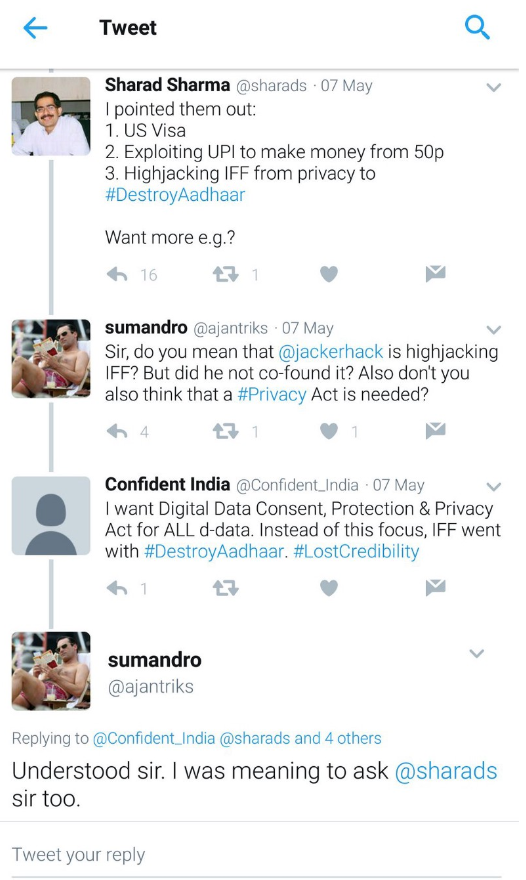 @Confident_India also went on a tirade against the IFF fellows and called them “JNUtype”, “ISISstooge” or belonging to Lutyens Delhi, insinuating that the IFF fellows are terrorists or largely belong to a certain social elite category of people. 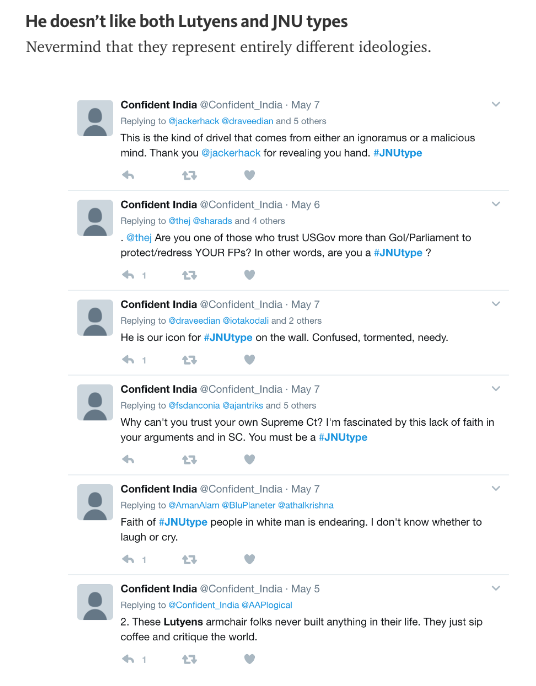 When this prompted Jonnalagadda to verify the account with Sharma’s number, it matched. He later posted the video on his account.

What's this? Have we caught an Aadhaar troll? Can someone try this and confirm? #AadhaarTrollMafia pic.twitter.com/9pzru7Lz2U

An email from The Wire to Sharad Sharma remained unanswered at the time of writing.

However, soon after this alleged expose kicked off a Twitter war between the two groups, Sharad responded with a reply to Nikhil Pahwa’s tweet. 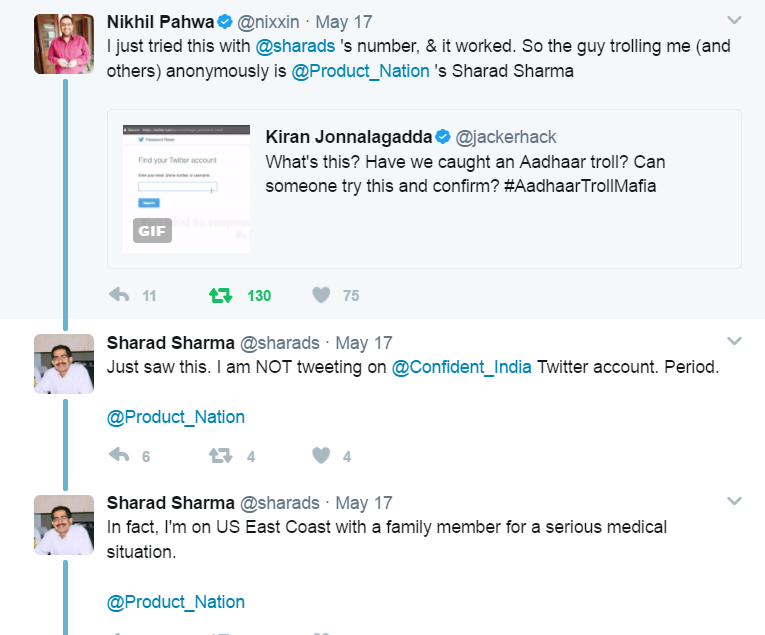 iSPIRT also responded in various online forums. “Sharad Sharma, co-founder of iSPIRT, named in these allegations is in the US for a medical emergency in his family. As of this morning, Eastern Standard Time, Sharad has categorically denied these allegations. We will further investigate the confusion around the alleged link of mobile number and clarify all outstanding questions. For the moment, we are prioritising the well-being of Sharad and his family,” says the organisation’s response.

“We want to categorically state that the allegations against iSPIRT coordinating and/or promoting any troll campaign are false and the evidence presented is a deliberate misreading of our intent to engage with those speaking against India Stack” it added.

Interestingly, however, what has emerged out of the controversy is another allegation by the IFF that iSPIRT had made trolling part of its policy to counter Aadhaar’s “detractors.”

At a fellows meeting earlier this year in February, iSPIRT charted out a “Detractors Matrix” in which they categorised the anti-Aadhar campaigners into four categories, namely “misinformed, fearful, and engaging”, “informed, fearful and engaging”, “misinformed and trolling” and lastly, “informed yet trolling”. In an internal iSPIRT presentation, Reetika Khera, IIT professor and a renowned economist, and Nikhil Pahwa, IFF’s co-founder were shown as belonging to the last two categories.

To counter Aadhaar critics on online platforms, iSPIRT volunteers intended to group themselves into “archers” and “swordsmen” who would challenge their theories on Twitter and elsewhere.

iSPIRT has acknowledged discussing the “detractor matrix” in its reply to the allegation but dismissed it being equivalent to trolling, as Jonnalagadda alleges.  Co-founder of iSPIRT, ThiyagaRajan Maruthavanan, while responding to allegations said that there was no official involvement on behalf of iSPIRT.

Many of the pro-Aadhaar Twitter trolls, most noticeably Confident_India, have also lashed out at other Internet rights organisations. This includes the Bangalore-based Centre for Internet and Society (CIS) which last month released a report that claimed that over 100 million Aadhaar numbers were publicly exposed by four government websites. The Confident_India Twitter handle has alleged that CIS has violated foreign funding regulations (under the Foreign Contributions Regulations Act), that they are likely “funded by ISI” and that because of their “advocacy efforts”, the organisation should be shut down.

CSI has foreign funding. Under FCRA they can't do advocacy. Govt. should shut them down.

It should be noted that the Unique Identification Authority of India has also sent a sharp letter to CIS over its report and has suggested that some of the Aadhaar data that the report documented could not have been gotten through legal means.