Lakhs of Anganwadi workers, who play a crucial role in taking care of nutrition and implementation of state’s welfare policies for children , have been demanding an increase in honorarium for several years. 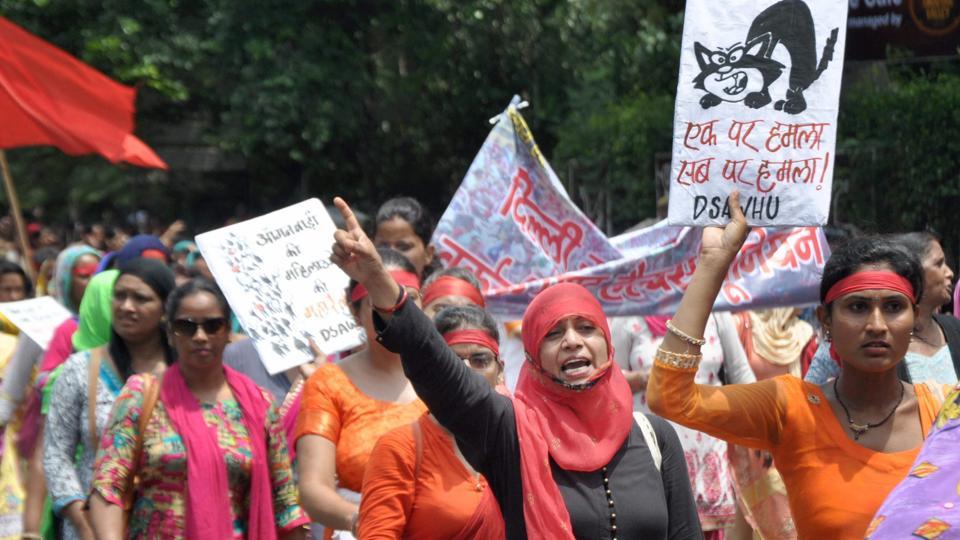 On March 15, the Maharashtra government issued an undemocratic order snatching away the right to protest from over two lakh women working as anganwadi workers and helpers in the state. In a government order issued on March 15, the state’s Women and Child Development (WCD) department has invoked the Maharashtra Essential Services Maintenance Act 2017 (MESMA) against the workers and barred them from going on a strike in future.

Anganwadi workers, who play a crucial role in taking care of nutrition and implementation of state’s welfare policies for children under six years of age, have been demanding an increase in their honorarium and pension benefits for several years. Instead of addressing these demands, the government has decided to make their strikes unlawful by invoking MESMA. Under this Act, these workers who are responsible for running the Centre’s Integrated Child Development Scheme, can be sent to jail for six months.

The WCD department’s order states: “The Government of Maharashtra is satisfied that, it is necessary, in the public interest, to prohibit the strike in the said essential services provided by the said workers.” This move, anganwadi workers and activists claim, was taken anticipating a state-wide strike that has been scheduled for March 27.

It is ironical that the state has decided to pass such a regressive order even when it has failed to accept them as “workers”, hence denying them of their labour rights of fair salary, retirement benefits, health insurance, among other things. Even over 40 years of creating this post, the anganwadi workers are only paid “honorarium” and not wages.

Anganwadi workers mostly comprise single mothers, widows and destitute women. The recruitment criteria were formulated in such a way that women were able to support their families and became self-reliant. However, over the years, the objective was forgotten and anganwadi workers have been working in extremely pitiable condition.

The officials have claimed that the order was issued keeping in mind the interest of over 56 lakh children who are dependent on the anganwadi workers for their daily care. “Last time they went on a strike, things became unmanageable. It is a matter of great concern and hence we decided to take this step,” an officer from the WCD department said. 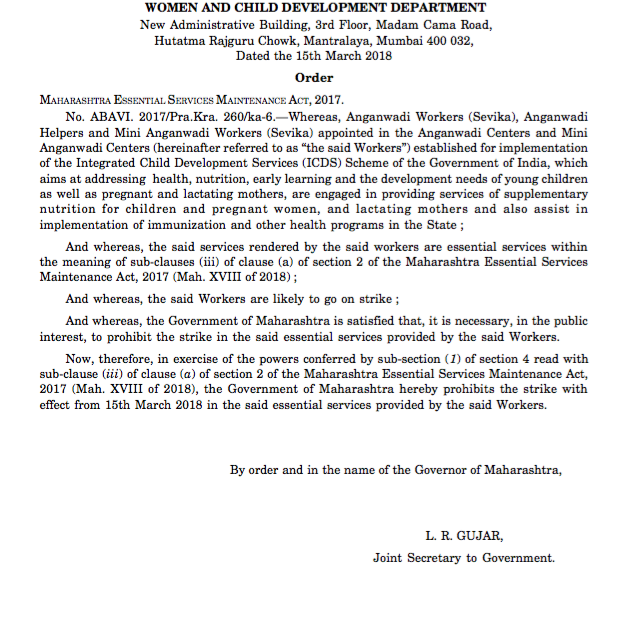 Last year in September, the workers had gone on a 26-day strike with specific demands for hike in honorarium, among other benefits. Depending upon their seniority, the workers had asked for honorarium in the range of Rs 7,000 to Rs 13,000 per month. The workers are currently paid Rs 6,500-6,800 a month and helpers get Rs 3,500 a month.

The state had, however, negotiated and offered to pay a 3%, 4% and 5% hike to workers who have spent over ten, 20 and 30 years, respectively, in the service. This offer, although, was nowhere close to what the workers have been demanding, the workers had agreed to the state’s assurances and had called their strike off. “The Chief Minister (Devendra Fadnavis) had promised to increase the payment in 2018 budget. However, there is not a word on that. Instead, they want to stop the workers from demanding their rights,” said Shubha Shamim of the Anganwadi Karmachari Sanghatana.

The workers have so far gone on indefinite strike only three times, Shamim said. “We understand what the repercussions are and that the direct impact of these strikes is on the children. But are these children only our (anganwadi) workers’ responsibility? And if the state recognises that anganwadi workers are involved in such a crucial work, why aren’t they treating them with dignity and paying them appropriate remuneration?” Shamim asked.

Besides this order, the state has also arbitrarily decided to reduce the upper age limit from 65-60 years for anganwadi workers. The new order issued in the month of February would be implemented from April 1 and over 13,000 women stand to lose their jobs. Yoshoda Shinde, a 62-year-old anganwadi worker who has been working at Dahanu taluka said that she has not received any correspondence from the government.

However, the workers union has informed her about the new notification. “I am told I will have to discontinue working from end of this month. I live alone and the only earning is the money I receive every month from working at the anganwadi,” Shinde said. If the state goes ahead with its decision, Shinde will be left in the lurch. “Although my monthly payment would get delayed, I at least knew I had some money. The government cannot suddenly remove us from the job. I am healthy and have been working for long hours at the anganwadi for nearly 25 years. This is unfair,” Shinde said.

A WCD official that The Wire spoke to said that the decision was taken considering the nature of the work that anganwadi workers are expected to carry out. “It is an exhaustive work and requires full attention to be given to young children. We cannot expect elderly women to work for long hours. Hence, we decided to bring down the age limit,” an official said on the condition of anonymity.

Angandwadi Karamchari Sanghatna, a union affiliated to the Centre of Indian Trade Unions (CITU) and All India Federation of Anganwadi Workers and Helpers (AIFAWH) has moved the Bombay high court against both the decisions taken by the government. “It is arbitrary and unconstitutional. Anganwadi workers have been treated terribly for years and instead of addressing their issues the state wants to find a shortcut to curtail them. We hope the high court gives them some relief,” Shamim said.