Ahead of the tournament, Vishwanathan Anand had suffered a terrible bout of form in 2018, finishing his last classical chess tournament, the Sinquefield Cup 2018, in sixth place out of 10 participants and not managing a single win. 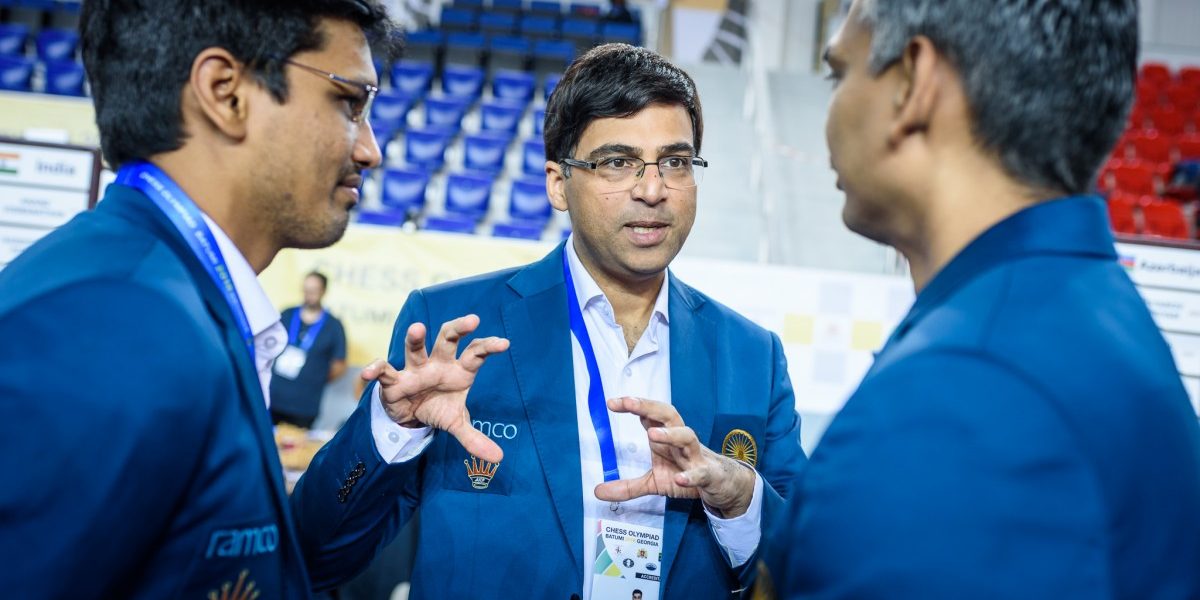 One’s biggest strengths can often turn out to be weaknesses in sport. At the end of four rounds at the Batumi Olympiad, in Georgia, the Indian Open team finds itself the latest victim of this, phenomenon following a loss to the favourites – the US.

The Indian team fell 19 places in its ranking – third to 22nd – in the wake of India’s 2-.5-1.5 loss, precipitated by Viswanathan Anand’s defeat at the hands of World Championship challenger Fabiano Caruana. Anand’s inclusion after 12 years into the squad for the Batumi Olympiad had raised hopes of India bettering their fourth place finish in the last Olympiad at Baku into a podium finish. As it happened, however, the Indian ace was the only loss on India’s side, capitulating in mere a 26 moves, playing with the black pieces against a brand-new idea employed by Caruana.

The loss brings memories from the Baku Olympiad, where the Indian Open team, placed first, had suffered a devastating 3.5-0.5 loss to an identical US team, crippling their chances for a medal. With seven rounds left to go in the tournament, India find themselves facing an uphill battle back into the running for a medal ahead of their clash against Paraguay in round 5, especially with Anand being off-colour.

Ahead of the tournament, Anand had suffered a terrible bout of form in 2018, finishing his last classical chess tournament, the Sinquefield Cup 2018, in sixth place out of 10 participants and not managing a single win. Nevertheless, his unbeaten run in St Louis was counted as a reassurance ahead of the olympiad, where his inclusion had buoyed the spirits of the team and fans alike. However, like his last outing for India at the olympiads in 2006, Anand has seemed far from hitting his top game so far.

Following victories that were his first in classical chess since 2017 in round 2 and 3 over significantly weaker opponents, the Austrian grandmaster Markus Ragger and Canadian grandmaster Eric Hansen respectively – this was the first time Anand was facing a higher-rated opponent playing with the black pieces, and his lack of form was exposed once again. More than the loss itself, it is the manner of Anand’s loss that will concern the Indian contingent because it was largely of his own miscalculation, rather his opponent’s brilliance.

The latter is to expected on board 1 where the best clash with the best, while the former is a rarity from the former World Champion. A loss in 26 moves is another. Another concern is the speculation of fatigue emerging after three days of back-t0-back games for the ageing grandmaster. The olympiad is a long and arduous tournament; the pressures on Anand going forward are only going to get more serious.

Indian fans can take heart from the performances of the rest of the team throughout the tournament, including the all-important clash against the US. Facing higher-rated opponents on all boards, the team limited their deficit to only one point (as opposed to two in 2016), courtesy three solidly played lines leading to draws for grandmasters Pentala Harikrishna, Vidit Santosh Gujarathi and Krishnan Sasikaran against grandmasters Wesley So, Hikaru Nakamura and Sam Shankland respectively.

Anand’s teammates, grandmasters Baskaran Adhiban and coach R.B. Ramesh included, have executed their plans largely to satisfaction through the tournament. The contingent made short work of their opponents in the first three rounds, the only minor blemish being not being able to achieve 4-0 victories and having to settle for some draws against lower-rated opponents, placing them third. However, such is to be expected from the nature of chess, where a draw is the most likely result statistically, and it takes nothing away from the players’ performances.

Going forward, India will need a big performance while being favourites against Paraguay. The team’s steady performance so far will cushion the damage from Anand’s crucial loss as they look to rack up the points with wins in the next round and climb back up the rankings. This factor could become significant as the tournament progresses, as the pairing for each round is decided based on total points.

Grandmaster Koneru Humpi’s comeback – another storied return to the olympiad – seems to be going perfectly to plan so far. The Indian women’s squad led by Humpi is placed seventh ahead of the fifth round, and is largely to do with flawless performances from grandmaster Harika Dronavalli and International Master Tania Sachdev, besides Humpi’s own score of 2.5/3.

International Masters Padmini Rout and Eesha Karavade have been the ones to drop games so far, both coming against Serbia in round 3, leading to a tie despite wins by Dronavalli and Humpi. Prior to that, the team had registered perfect scores in rounds 1 and 2 against New Zealand and Venezuela and they have followed the tie with a win against Poland in round 4 ahead of their clash with Argentina in the next round.

Apart from the positive results, the women’s section also produced the most rollercoaster win from the Indian contingent, when Sachdev refused to give up in a clearly worse position against the Kiwi Vyanla Punsalan, rated over 500 points below Sachdev. After crawling to an equal endgame, Sachdev made one more mistake grabbing a pawn, but this was returned with a mistake that allowed the Indian no. 3 to take home the full point.

Making this comeback seems to have raised Sachdev’s confidence, which in turn has shown in her performance. Having played all the games so far, Karavade is likely to be rested against Argentina, which will mean that India will field its strongest women’s team yet in the fifth round. Placed seventh with seven rounds to go, the team is well within reach of a podium finish. It will look to Humpi to better the results of her open counterpart on board 1, while the rest of the team continues with its strong performance.