Queens on the Board, Pawns in the Sport – the Underrepresentation of Women in Chess

Ahead of the Batumi Olympiad, a look at the role of gender stereotypes in the ultimate intellectual sport and why female representation at the top echelons is still virtually absent.

It's a vicious cycle: girls play worse because they think they are worse, confirming the perception that they are worse. Credit: Pixabay

At the 43rd Chess Olympiad – the biennial equivalent of the Olympics for chess – due to commence from September 23 in Batumi, Georgia, a peculiar phenomenon can be observed. The tournament will be conducted under two sections, one “women’s” section and the other “open”, indicating that it is open to players from both genders. Over 150 countries will be sending in teams of five (four active and one reserve) for each category, but in none of those contingents will any female be playing in the “open” section.

Several decades into the history of open chess tournaments, female representation at the top echelons of chess is virtually absent. In fact, only one female player, retired Hungarian grandmaster Judit Polgar, has ever competed in the open category at the Olympiads. Judit has a monopoly on almost all achievements in women’s chess, including being the highest rated female player ever, the youngest grandmaster across sexes at the time, beating Bobby Fischer’s record, and the only female player to have beaten the current world champion Magnus Carlsen. 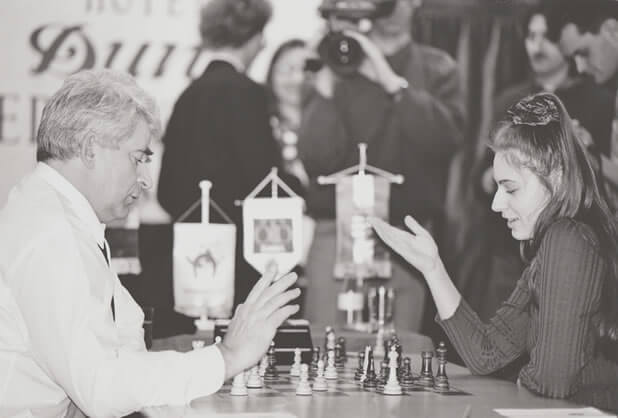 These achievements, though they have revolutionised the face of women’s chess, make Polgar an exception rather than the rule for female chess prowess.

Except for Judit, though, only Hou Yifan – the Chinese prodigy who is the highest rated active female player by far – has ever beaten a former world champion and remains the only female member of the top 100 chess players by FIDE ratings and is currently ranked 88th. Even Yifan has not managed to replicate Judit’s feat of breaking into the top ten or competing in the candidate’s tournament to decide the challenger for the World Championship, also ostensibly an “open” tournament since 1986.

These statistics, prima facie, make the need for a separate category for the women transparent, although completely for the wrong reasons. Usually they are cited as objective evidence, in studies like Australian psychologist Robert Howard’s “Explaining male predominance at the apex of intellectual achievement (2013)”, confirming the unspoken logic behind having a tournament just amongst the women: that men are just smarter than women, period. Women’s chess, by this implication, is not “real” chess, but something to keep the women included as they simply cannot compete with men.

Further credence is led to these assertions by the existence of women’s titles, handed out 200 FIDE rating points below their open counterparts, and the preference of exceptional women like Polgar and Yifan for open tournaments in favour of women’s only events, including the Women’s World Championship.

These facts tend to reinforce views from the youthful outbursts of former world champion Garry Kasparov, when he pronounced chess a fight and women inherently weak fighters. However, the Russian legend was in elite company, including other former world champions like Bobby Fischer and a host of other grandmasters, organisers, club-owners and writers over the history of chess. Fischer described all female professionals’ play at his time to be that of “beginners”, and went on to boast about hypothetically beating any female chess player with knight odds (when challenged to the same, though, he didn’t respond). He thought it was because all girls were “weak” and “stupid compared to men”.

In 1991 Swedish Grandmaster Ulf Andersson was quoted in Pal Benko’s “Winning with Chess Psychology” to have found it “unworthy and degrading” to lose to a woman because “in a game of brain versus brain, where you can’t follow theory, they are without a chance”. British GM Nigel Short came under fire for suggesting the reasons for women’s inferiority in chess could be “hardwired” as recently as 2015, but these men have been mere mouthpieces, every now and again, of the unspoken assumptions and prejudices surrounding women’s chess-playing abilities that run parallel with similar presuppositions about women in all sports.

Unlike most other sports, though, chess is neither primarily physical nor requires different rules or playing conditions for women. However, the gap between the sexes is easily visible in the prize-funds across tournaments, including World Championships and the Olympiad, which are much higher for men without fail. Usually “better pay for better play” is the argument used to dismiss this disparity, and it is in this context that the “women are dumber than men” argument becomes crucial for chess to justify its inequities of payment and stature.

This line of reasoning has a long history with disastrous consequences, which include the supposed inferiority of skill that it accuses female chess of. Once again, Judit Polgar’s example forms the perfect illustration: she’s beaten both Short and Kasparov, and is largely responsible for the changed perception of women’s abilities, Kasparov’s included. Polgar has repeatedly stated that “women are able to reach the same result as our male competitors if they get the right and the same possibilities”, and her own upbringing proves that circumstance, besides any innate ability, forms a crucial part of an elite player.

Judit, along with her elder sister Susan Polgar – the first female chess Grandmaster – were raised as part of an educational experiment carried out by their father in order to prove that geniuses are made, not born. Thus, the sisters received better training than almost any female chess player does, and the results are self-explanatory. It is no wonder, then, that the sisters cite structural inequalities in payment, coaching, training and support as the reasons for the gap in female performance when compared to men.

As it is, the gap in enrollment between boys and girls may have gone down in the years since the Polgars, but women continue to have high dropout rates in chess. At any Open tournament one cares to notice, the number of males dwarfs the females. The reasons for this, when cited, ring similar to all sports: lack of encouragement from parents and teachers, shortage of role-models, and unwelcome environments in male-dominated arenas during formative years of interest and expertise.

One top of these, years of damaging remarks from the game’s legends, both on and off the board, have led to significant psychological hurdles. Not only has the stigma against them been shown to have an adverse effect on women’s performances against men, it also predisposes them to play a less aggressive brand of play when playing a female and show “lesser self-esteem”. The overall result is a vicious cycle: girls play worse because they think they are worse, confirming the perception that they are worse.

These factors discourage female participation in professional chess, which in turn discourages coaching facilities, training, and perhaps most importantly, the economics of continuing with the sport for female professionals. This is where the existence of women’s only tournaments has found its due justification: as an inviting and encouraging environment which not only ensures the participation of females in chess, but also provides a means of prize-money and promotions available specifically for them. The existence of these tournaments remains a hope to bring more females into the fold of the sport, increasing the pool from which another exception like Judit or Magnus Carlsen can emerge.

This approach has received significant support, even from amongst the Polgar sisters. Susan Polgar recently wrote a letter arguing for equal pay for players at the World Junior’s and World Girls’ championship levels as a start to economic parity, whilst arguing for the continued existence of these tournaments. Jennifer Shahade, two-time American Women’s champion and Chess author, also told NPR she believes that without women’s tournaments more women would quit Chess in favour of other things.

Even so, criticism of this approach is also to be found from amongst the Polgar sisters, especially Judit. She has habitually shunned participating in women’s chess events throughout her career, and insists that in order for women’s chess to hit the next level, they’d have to aim higher. By limiting themselves to all-women events, they’d be limiting their ability to improve. These are opinions similar to those dating back to former world champion Alexander Alekhine, who observed that the skills of Vera Menchik – the first women’s world champion crowned at the first Chess Olympiad in 1927 – were wasted on her opponents much inferior in strength. Amongst modern grandmasters of the game too, some such as American Sam Shankland endorse this view.

Ahead of the Batumi Olympiad, the debate between the two camps is unsettled in the long run. In the short term, though, the existence of these women’s tournaments needs to be separated from the notion of inherent inferiority that has damaged the psyches and possibilities of so many of its newcomers. Chess has come a long way since its sexist heyday when women weren’t even allowed in most chess clubs, evidence of which is visible in Kasparov’s admission of his “sexist” mistake in 2017. However, he remains right in saying that a female world chess champion is still only a theoretical possibility.

For that to change, a change would first and foremost be required in the attitude we bring to the introduction of chess to different sexes, and the expectations we have from both as spectators, trainers, and parents.