With the rules changing and technology playing a bigger role in the sport, many assert that the Tour de France was better “before”. 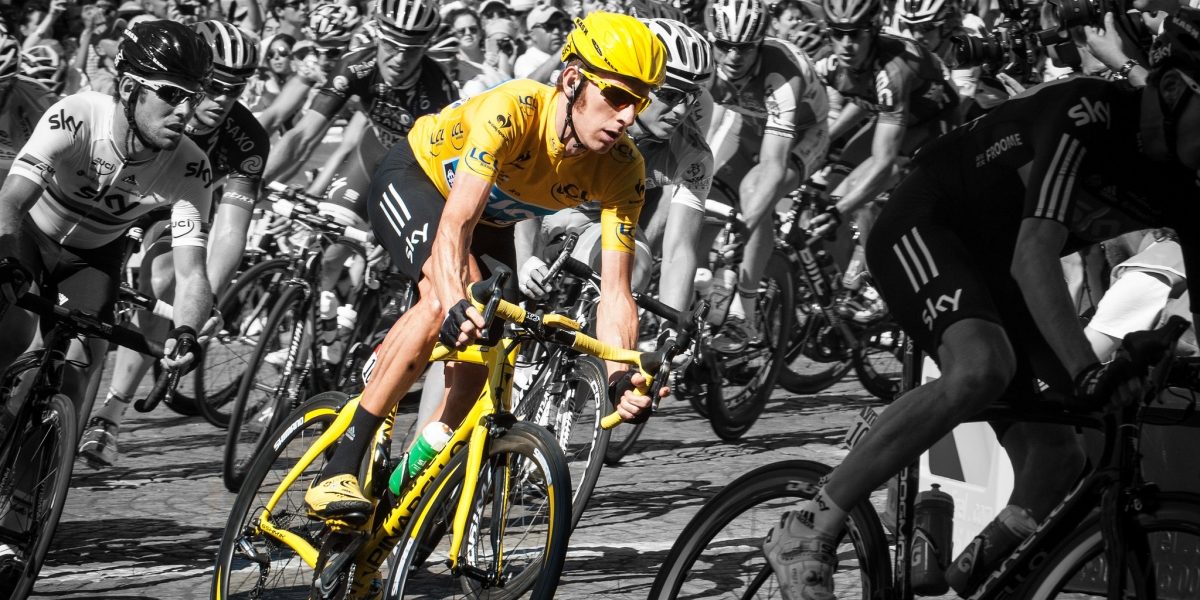 In 2019, the Tour de France changed its rules so that teams consisted of eight riders instead of nine. Christian Prudhomme, director of the Tour, justified the decision by citing safety issues (fewer riders, therefore less risk of crashes) and the dynamism of the race (fewer riders, therefore fewer locked-in stages). The change was initially proposed in 2017 by the International Cycling Union (UCI), and other major races such as the Tour d’Italie (the Giro) et the Tour d’Espagne (the Vuelta) also followed suit.

While the change was controversial, major sporting events often adjust their rules to improve safety, spectacle, fairness or possible economic interests; Formula 1 is a classic example.

With the 109th edition of the Tour de France starting on 1 July in Copenhagen, Denmark, how does the future look for La Grande Boucle?

Slipping interest from spectators – but also a rebound

Commentators and viewers of the Tour de France are entranced with its storied past, and many assert that it was better “before” – there was more uncertainty, more spectacle and fewer locked-in races. The thought is that cycling epics of the past were because technology had not yet taken over from the human factor, and the striking black-and-white images of the classic battles bring the idea home. Philosopher Roland Barthes called the Tour de France a “modern myth” and linked it to the importance of collectively held beliefs built in the past.

Technology such as radio headsets that relay orders from team managers and components that measure riders’ power are regularly accused of dulling the Tour de France. A decade ago, we were already paying attention to the impact of radios on the course of the races, and the debate is far from over.

While the Tour’s viewership has been steadily falling in recent years, the 2021 edition had an overall audience of 42.4 million, a record. The creation of half-stages, time bonuses, the introduction of different jerseys, intermediate sprints and other measures have all been taken to make the race more dynamic, the last two editions of which were won by Slovenian rider Tadej Pogacar.

Does this mean that such changes have helped the Tour de France become more interesting to follow?

The value of the yellow jersey

For the sake of consistency, our analysis will take as its starting point the 1969 tour, when branded teams returned, more than five decades’ worth of data.

Over the past 50 years, the average speed of the race has increased (nowadays, just under 41 km/h) while the total distance has decreased. The equipment is also better, the teams are more structured, and the preparation of the riders is even more serious. The proof is in that the drop-out rate in the Tour de France has been falling – more than ever, the presence of team members is essential right to the end.

The following figure shows the percentage of final drop-out rate and the average final speed.

Could this be a sign of a race that is becoming more and more competitive? One should be wary of such an interpretation, as the gaps can be controlled while minimising the risk, thanks to the work of the team members who control the race. So what objective criteria allow us to think that a Tour de France is truly disputed and potentially interesting to follow?

Deliberately putting aside the jerseys or stage victories, the interest of the race is often linked to the “battle” for the yellow jersey (the first in the time classification). In other words, if control of the yellow jersey is uncertain, there should be a greater interest in following the race.

The uncertainty inherent in the control of the yellow jersey is based on two dimensions: the strong variation of the riders wearing it throughout the race and the weakness of the final gaps.

An analysis allows us to position and rank the 51 Tours de France since 1969 as shown in the following diagram. (Note that while the US rider Lance Armstrong’s seven victories were withdrawn due to doping, the data has been retained for statistical analysis.) Positioning of the Tours de France according to the size of the gaps and the variation in yellow jerseys. Chart: Author provided

The top-left quadrant (in red) corresponds to the Tours that are strongly dominated (large gaps and few different yellow jerseys). We will call them “locked” races, and they’re often the least interesting to follow. We will find a good number of Tours from the 1970s with the domination of the Belgian champion Eddy Merckx. The last “locked” Tour was in 2014 with the victory of Italian Vincenzo Nibali when several favourites abandoned.

The top-right quadrant (in orange) corresponds to Tours where the number of riders wearing the yellow jersey has varied greatly, but the final gap is significant. This is a classic pattern during the 1980s when large gaps were created. These are “open and then closed” Tours.

The bottom-left quadrant (in blue) shows Tours where the final gaps are smaller but the control of the yellow jersey is higher. These are the “controlled” Tours, the basic trend of the 2010s with the victories of the British team Sky with Bradley Wiggins, Christopher Froome and Geraint Thomas.

The racing patterns of Spain’s Miguel Indurain in the 1990s are linked to this category. With the strength of his team and his domination of the time trial, the winner does not need to open up a big gap. It is a scientific management of the race where the “marginal gains” prove decisive and the suspense is short-lived.

The bottom-right quadrant corresponds to the most interesting Tours de France – in our opinion – because the final gap is small and there was a strong variation in the yellow jersey holders. They include 1983 (the first victory of Laurent Fignon, with 20 different stage winners), 1987 (Irishman Stephen Roche and his neck-and-neck race with Spanish rival Pedro Delgado), 1989 (which ended with American Greg LeMond winning by a mere 8 seconds over Laurent Fignon) and 1990 (also won by LeMond). The 2019 Tour de France, with the victory of Colombian Egan Bernal and the pugnacity of France’s Julian Alaphilippe, was a pleasant surprise.

Our results clearly indicate the advent of races where the gaps are small but where the final winner emerges very early on; these “controlled” Tours are dominant in the recent past (2010s). 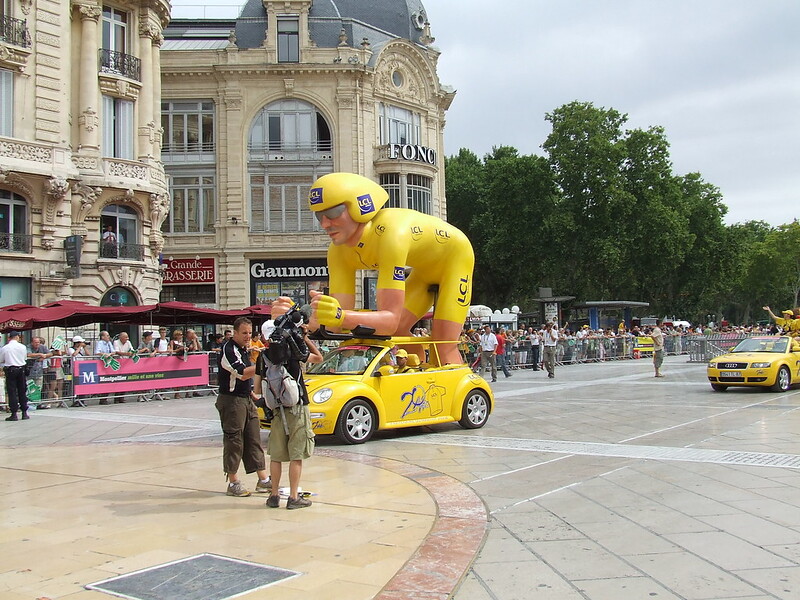 One of the floats in the Tour de France. Photo: Peter/Flickr CC BY 2.0

Technology does not explain everything

Yes, the cycling authorities are right to change the rules of the races to encourage more dynamism, but the Tours back in the “glory days” were not necessarily more exciting. Certainly, the reduction in the gaps between the frontrunners suggests that the latest Tours de France show a greater control of the race: the winner, without failing, keeps his opponents at a close distance. The banning of technology (earpieces, power meters, GPS) may make sense, but the recent trend is similar to that of the 1970s, which were devoid of such informational tools.

Technology does not explain everything, and regulation of team composition seems more sensible than a ban on technology used in racing (like the 2009 attempt).

The question of the viewer’s perception of the race also seems to be crucial to better understand the problem. Historically, the Tour has been a race magnified by the written press and then by the radio, which have capitalised on a few race facts to tell what the audience could not see.

The stages are now covered in full, with cameras more important than pens, GPS transponders placed on the bikes and the real-time processing of data indicate to everyone the precise position of the riders.

Uncertainty, in economic theory, is based on an absence of information. The viewer is less and less in a state of uncertainty and this changes his or her perception of the race. As a result, a moderating effect may appear, which indicates that races without a real battle will be perceived as much more boring, whereas races with a lot of action will be more appreciated. This effect amplifies the relationship between the actual event and the viewer’s perception of it, will continue to grow with the technologies available to the viewers and the media.

It is therefore even more crucial that the rules be modified, possibly in a heuristic way, to encourage the appearance of exciting race events. It’ll be interesting to see how the 2022 Tour turns out, to find which quadrant it ends up in.