The boxer, who has matched the Olympic performance of legends Vijender Singh and Mary Kom, will face reigning world champion Busenaz Surmeneli of Turkey in the last-four stage on August 4. 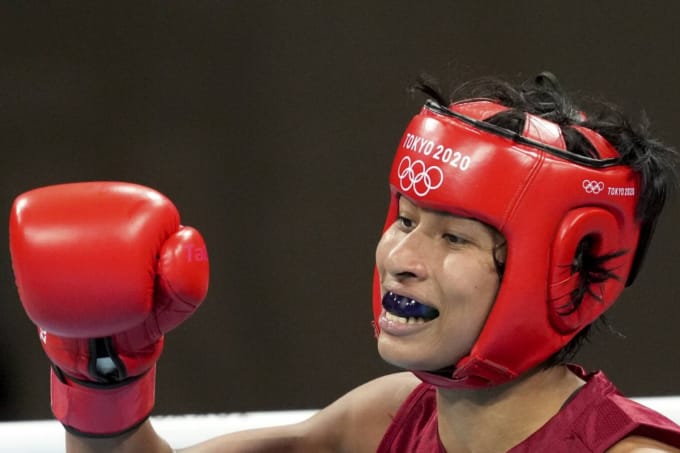 Tokyo: She delivered a thoroughly clinical performance to ensure an Olympic medal on debut but Indian boxer Lovlina Borgohain (69 kg) on Friday said she stepped into the ring against former world champion Nien-Chin Chen without a concrete plan as she knew just a fearless approach would be enough.

The 23-year-old Assam boxer was smiling ear-to-ear after making the semifinals but also well aware that the task is only half done.

“Isi ladki se 4 baar haar chuki hun (I had lost to her four time earlier), all I wanted to do was prove a point to myself by being fearless against her. I was just looking for revenge,” she said with a wide grin in an online media interaction.

“I enjoyed myself in this bout, khul ke khela. There was no strategy, no plan. I knew her from before, the plan wasn’t even needed,” she added.

“In today’s bout the key was that I didn’t take any pressure, it would have been counter-productive. I only tried to give my 100%.”

The boxer, who has matched the Olympic performance of legends Vijender Singh and M.C. Mary Kom, will face reigning world champion Busenaz Surmeneli of Turkey in the last-four stage on August 4.

“I have a few days, I will see her videos and figure out what to do with her,” she said.

But she was averse to dwell too much on her struggles as she said it would be more appropriate to talk about her journey after she has actually completed her campaign, preferably with a gold medal.

“I will say even thank you to people after the final. Abhi kya bolun. Medal to bas gold hota hai, let me get that first,” she said.

The Boxing Federation of India President Ajay Singh, who joined her during the interaction, lauded her fearlessness but Borgohain was candid enough to admit that she wasn’t always like this.

“I was not fearless, I used to get scared but dheere, dheere dar khatam hua. I used to be scared before stepping into the ring. But now I have started believing in myself, I have stopped caring about what others say, that’s how I became fearless,” she said.

Meditation was also something that helped her along the way but she toned it down in the past few months as “you can’t afford to have too calm a mind either in boxing.”

“Meditation is something that I started focussing on in 2017, mujhe fight mein fayda hota tha,” she said.

“But in the last four months, I gave up on it a little bit because boxing is a noisy sport, you can’t have too cool a mind either. Otherwise it becomes difficult. Ultimately I just told myself that I have to believe in myself.

“I have to fight, even if it is with a broken limb, I have to,” she explained.

Borgohain started out as a kick boxer, Muay Thai, practitioner.

“That was just for a year. It helped when I started boxing but at this stage, it has no contribution to my success right now,” she said.

She had a rough build-up to the Games, including a bout of COVID-19 last year. But the toughest part for her was to miss her mother’s surgery after a kidney failure.

“I regret not being there because of training. I could give her very little time. Even today the media frenzy at my home has ensured that I have not been able to speak to my parents properly so far,” she said.

A fan of Muhammad Ali and M.C. Mary Kom, Borgohain said, “I follow his (Ali’s) footwork and long punches.”

“As for Mary didi, it is an honour to be a part of the same camp, to train with her. She is an inspiration.”

For the rest of her story, she said, “It is a long one, Olympic gold lene ke baad bataungi.”