Like the Odisha government of Naveen Patnaik has shown, states can be enablers by providing infrastructure to clubs and associations but staying out of management. 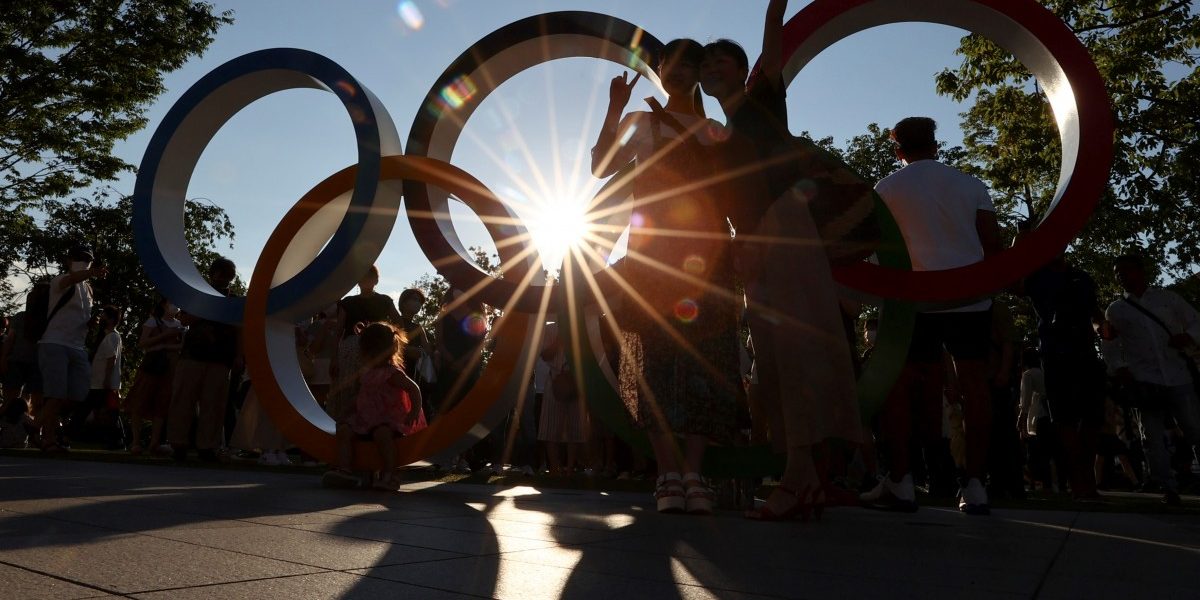 People pose for a photograph in front of an Olympic rings monument outside the National Stadium, the main stadium of Tokyo 2020 Olympic and Paralympic Games in Tokyo, Japan July 31, 2021. Photo: Reuters/Issei Kato

The most enduring memory of 2021 Olympics for India would be of our golden boy from Panipat, Neeraj Chopra, standing on the top step of the podium at the medal ceremony in rapt attention, clutching the ceremonial blooms, as the Indian tricolour was hoisted to the strains of our national anthem, under the Tokyo sky.

In a country of 1.39 billion, should seven medals at the Tokyo Olympics be celebrated or seriously reflected upon for the next Olympics in Paris, three years hence?

India stood 47th in the rankings and 33rd in the medals tally while small nations like Qatar and Kosovo won two golds each and big guns like the US, China and Russia maintained their robust share in harvesting gold.

India came back with seven medals. Yet the government and sports associations organised widespread celebrations of our defeats and near podium finishes, calling it the “best performance”. Revelling in mediocrity, only makes our citizens complacent and lowers the bar. India sent a big contingent. Some contestants were swept away at the first tide. Others, like shooters, underperformed. Table tennis was a wash out and archery an acute disappointment. We deserved a lot more in boxing and wrestling too.

Of those who achieved, Neeraj has prodigious talent and a dedicated coach who constantly complains openly and alerts the sports authorities and corporate funders alike, about diet and foreign training. Sindhu’s talent comes from a sporting family, harnessed by super coaches, Indian and Korean. Northeastern sportspersons have shown talent and true grit and Haryana is the land of sports with more than half of our total Olympic medals coming from the state.

Where else are the medals coming from, apart from these catchment areas? There are signs of hockey revival but with such fierce competition, a lot more is required for both men and women players in the area of training and exposure to playing matches abroad.

Without doubt, there is an abundance of raw talent in the country in various disciplines like archery, wrestling, boxing, hockey, etc. But then, is raw talent enough to win in the international meets? It takes years to hone skills, increase stamina, inculcate match temperament, imbibe modern techniques through coaching and, above all, hold nerves in the final moments of the match. Many Indians falter at the last step after performing so well in the beginning.

How do other countries do it? Great Britain from winning one gold in the ’90s has now gone up to 22. Earnings from the lottery were pumped into sports with focus on certain disciplines like sailing. Brazil’s strength lies in beach volleyball while Cuba is crazy about boxing. South Korean archers have the financial backing of Hyundai for the latest equipment and gear and performed brilliantly at Tokyo.

The Economist, discussing the winnability quotient of Olympic medals by various nations, lists GDP (gross domestic product) as the strongest factor. While the US and Russia were competing for the top place during the Cold War, it is China now with the second largest economy, coming close, and almost surpassing the US at Tokyo. India is the fifth largest economy and yet its medal haul is dismal with one medal equivalent of over $3.5 billion worth of GDP.

Strategies to improve the status of sports in India

India introduced TOPS i.e., Target Olympic Podium Scheme in 2014, designed by the well-known sports analyst Amrit Mathur for selecting the right prospects and then giving them full financial and other support. Alas, in seven years it has not yielded the desired results with two medals in Rio and seven in Tokyo.

Drastic overhaul of the sports structure in India should begin with dismantling of the sports ministry itself. You do not even need a sports minister. Indian sports has been ruled by netas and babus since independence. Bureaucratisation of sports has stunted its growth and trapped it under layers of dusty files, schemes and programmes. The ministry headed by a full secretary rank officer, spends needless money on establishment and wasteful administrative expenses without any contribution. Another babu heads the Sports Authority of India and between these two non-sportsmen, files play along merrily to their tunes.

Sports need a focused approach. One body named as the Sports Corporation of India is the right way to go about it. It should be headed by a CEO chosen from experts all over India. The government can directly transfer funds which can be audited yearly by a special committee. The corporation board should have seven members comprising industrialists and Olympic gold/silver medalists. The CEO should be given complete autonomy to run the corporation and schemes like the TOPs.

There should be a fresh selection of games and disciplines from a medal prospecting angle. States and corporates could then be targeted to focus on them. Odisha has already contributed handsomely towards hockey.

Sports is a state subject, so what should their role be? That of enablers and not interveners. The best example to emulate is that of the Odisha chief minister, whose contribution to hockey revival has been immense. Sundargarh is the new headquarters of Indian Hockey. The World Cup was organised in the state in 2018 and another one is forthcoming in 2023. The plan is to have an artificial turf stadium in every district of Odisha.

Ultimately, we come back to the Nobel laureate Paul Samuelson’s famous poser for the nations – guns or butter? India spends 0.01 % of its GDP on sports. In a country with 80 crore people on food subsidy, can a higher allocation to sports be expected? The increment in every budget, no matter how large, is just like a drop in the ocean. The crying need for infrastructure can only be met by corporate help and private bodies. In the US and other countries, stadiums are built and jointly owned by the government and corporate bodies.

Excellence in sports can only come by spotting raw talent and nurturing them through provision of equipment, training, latest skills and financial security. Cricket has it all and is drawing upon the raw talent from semi-urban areas. It is the culture of sports at the school level and in local clubs where you can spot the future champions. It is here that the states can be the enablers by providing infrastructure to clubs and associations but staying out of management. If netas and babus keep away, professionals are bound to do much better and bring India on the world sports map to complement the nation’s rise as a superpower.

Yashovardhan Azad is chairman, Deepstrat; a former Central Information Commissioner and  IPS officer, who served as director of youth and sports, Madhya Pradesh; member of International Security Advisory team for Atlanta Olympics and head of GOI team to Pakistan in 2004 for organising Indian cricket team tour to Pakistan after 15 years.