Timeline of FIFA and the AIFF Controversy

With FIFA suspending AIFF after the stroke of midnight on the 75th anniversary of Indian independence, the PTI gives a timeline of what transpired to this ban. 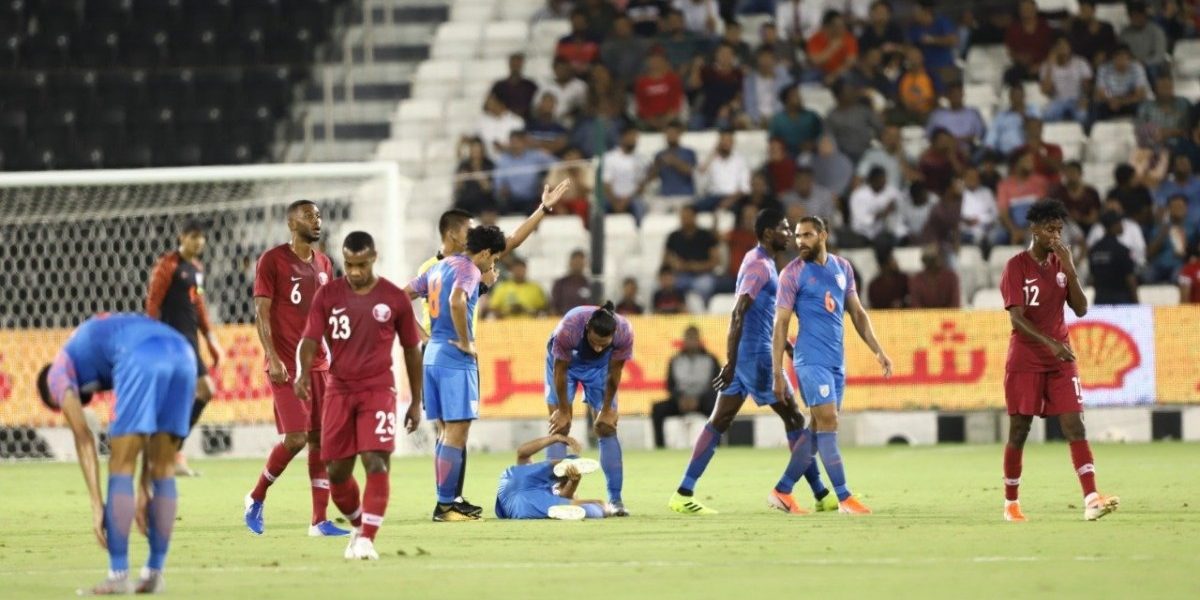 Representative photo: Players in action in the India versus Qatar match. Photo: Twitter/@IndianFootball

New Delhi: It all started to go from bad to worse as controversial former AIFF president Praful Patel, whose third term in office ended in December 2020, stayed in office citing a pending Supreme Court case.

The case that was pending since 2017, allowed him to extend his term while refusing to hold elections till the issue of a new constitution was settled by the top court. Patel violated all principles of good governance for multiple years.

As per rule, 12 years is the maximum term permitted to a national sports federation chief under the Sports Code.

It was host of officials from state units, along with former Mohun Bagan goalkeeper and current Bharatiya Janata Party leader Kalyan Chaubey, who then approached the court in their own capacities demanding intervention.

With FIFA suspending AIFF after the stroke of midnight on the 75th anniversary of Indian independence, the PTI gives a timeline of what transpired to this ban.

May 23: Praful Patel requests FIFA chief Gianni Infantino to not impose a ban on the country after the sports body was placed under a Committee of Administrators.

May 29: The CoA member S.Y. Quraishi says a newly elected body of the AIFF should be in place by September-end and a modified constitution will be submitted to the Supreme Court by July 15.

June 11: The COA and members of some affiliated units meet to discuss the way forward on holding the long-pending elections of the national federation at the earliest under a new constitution adhering to the national sports code, FIFA and AFC Statutes.

June 21: First round of talks between the visiting FIFA-AFC team and COA running the affairs of Indian football has “goes off well.”

June 22: The AIFF member units meet the visiting FIFA-AFC team and informed them that the Supreme Court intervention in the national sports body was “out of necessity.”

June 23: The visiting FIFA-AFC team sets deadlines to clean up the mess, asks the stakeholders to get the constitution approved by July 31 and conduct elections by September 15.

July 16: The CoA submits AIFF draft constitution to Supreme Court for its approval.

July 18: AIFF state units expressed unhappiness over several provisions in the final draft constitution, prepared by the CoA, but say willing to find middle ground. The state associations, represented by a seven-member panel, had written to the FIFA that several clauses of the final draft are discriminatory and illogical.

July 21: The Supreme Court endorses the need to expedite the elections to the AIFF.

July 26: FIFA recommends AIFF to have 25% eminent player representation in its executive committee as co-opted members instead of the 50% stipulated in the draft constitution by CoA.

July 28: A Supreme Court bench of Justices D.Y. Chandrachud and Surya Kant say it will hear the modalities for holding the elections on August 3.

August 3: The Supreme Court directs AIFF executive committee to to expeditiously hold elections as per the schedule proposed by the CoA, which is currently running the affairs of the national federation. The top court said that the Electoral College for the executive committee of AIFF would have representatives from 36 state associations and 36 representatives of eminent football players.

August 5: The Supreme Court approves the COA time-line for AIFF elections, polls to be held on August 28 and the poll process will start on August 13.

August 6: FIFA threatens to suspend the AIFF and strip it of its right to host the women’s Under-17 World Cup in October due to a third party “influence.”

August 7: The COA assures FIFA that its is on course to set the All India Football Federation.

August 10: The COA files a contempt petition against ousted AIFF president Praful Patel for “interfering with the proceedings” of the Supreme Court.

August 11: The Supreme Court warns the state units of “exercising its authority” if ousted AIFF chief Praful Patel attends its meetings and interferes with the administration of justice.

August 13: AIFF includes 36 ’eminent’ players, including Bhaichung Bhutia and IM Vijayan, in the list of voters comprising the electoral college for the general’s body elections, which are to be held on August 28.