The Shane Warne Theatre That We Merely Lived In

There is something uniquely indescribable about the Shane Warne experience. His bowling was a grand theatrical act. Warne loved playing the showman. The stories we hear growing up more often than not are fantastical in nature.

They involve wizardry, superpowers, magic, and a whole lot that we in due course of time discover isn’t real. The inherently fascinating element of stories is they allow a passage into the surreal that we start to believe in.

And with every retelling this belief gains strength and evolves into faith. This faith in turn may easily take form of an unhealthy obsession if not kept in good check.

Which is why we learn to make peace with the distinctly ordinary and mundane realities of life despite silently nursing a hope for our faith to be rewarded some day in some form. For those of us who lived through the life and time of Shane Keith Warne though, we do not have too many reasons to complain.

For watching the greatest spin bowler of all time in all his pomp and splendour was as close as it came to witnessing magical realism unfold.

For we watched the fantastical coalesce into the real.

For we indeed had our faith rewarded and how.

There is something uniquely indescribable about the Shane Warne experience. His bowling was a grand theatrical act. Warne loved playing the showman. In that slow walk of death with which he approached the crease, he made sure he left an air of anticipation and a sense of deep discomfort among those about to face him.

He could’ve bowled the most innocuous of stock balls that did nothing off the pitch but he’d ensure it registered as an event in the mind of his opponent.

Warne’s mostly incomprehensible combinations of finger and wrist positions made life unfairly difficult for the batsmen cursed to deal with his trickery. As if it wasn’t hard enough to gauge for the drift he could impart, his variations off the pitch often made perfectly decent batsmen look comically out of depth.

If Mike Gatting and Andrew Strauss were left flummoxed with the insane amount of side-spin he generated, Alec Stewart and Daryll Cullinan simply got made fun of with the flipper they couldn’t pick. To see the batsmen struggle with Warne’s deceptions was a sight for the sore eyes. It’s almost as if he derived some kind of sadistic pleasure out of delaying the moment and instead enjoy what he put them through.

Take this over to Craig McMillan at Christchurch. On a flat pitch with little assistance on offer, Warne literally makes a mockery of McMillan’s defence bowling an unusual line from around the wicket. McMillan finally plays at one on the half-volley and guides straight into the hands of Simon Katich at short leg. Throughout the setup, Warne poses like a cunning schemer and Adam Gilchrist from behind the wickets plays his part. It’d rank among the least skillful wickets Warne has taken but it’s also among the most entertaining ones.

McMillan wasn’t exactly a Test great by any stretch but he was no mug with the bat either. He was amply adequate to negotiate with an unorthodox line of attack on a placid track and he may very well have without the name of the bowler playing in his head every single time he faced him. Warne’s towering reputation that preceded every ball he bowled weighed down on men far more accomplished than McMillan was.

But this irrational fear of Warne wasn’t just restricted to those cursed to face him in the middle. The fans didn’t particularly retain their poise either when their team was up against him. English cricket writer Peter Hayter in the documentary on the famous 2005 Ashes perfectly encapsulates this sentiment.

In the fourth Test at Trent Bridge, England had gone off to a brisk start in pursuit of a meager 129 to go 2-1 up in the series but no England fan was breathing easy just yet. ‘You just knew, you just knew’, Hayter says of the inevitability of Warne throwing in one final dice that England would have no answers to.

And doing no harm whatsoever to his status, Warne ran through the English top order in his opening spell throwing cat among the pigeons. Though England went on to win the Test, the mere presence of Warne never allowed them to feel they were in charge. It’s mostly a clichéd expression but perhaps Warne indeed did pick his moments to be at his wily best inducing inconsolably high levels of anxiety among the opposition ranks. And with those pompously loud celebrations he ensured he made it known.

Players spend their entire careers without that one defining performance that’d continue to widely resonate in public memory. It’s not always a reflection on the player’s caliber. A lot needs to fall in place for one to be able to rise on that proverbial ‘big occasion’. Warne was uniquely special on this front too as while most struggled for one, he rose to his supreme best twice at the biggest stage of them all – the semifinal and final of the World Cup in 1999.

The semifinal at Edgbaston against South Africa in particular ranks among the finest individual efforts in the history of one-day cricket. Just when it looked like the Proteas were making light work of the sub-par target, Warne practically declared he was taking over. The eighth ball of his spell that accounted for Herschelle Gibbs was perfection in aesthetics.

The ball drifts through the air pronouncingly leaving Gibbs with zero chance to judge the line it’d eventually land at. Off pitching, it travels roughly the same distance again, this time in the opposite direction. Gilchrist behind the wicket jumps nearly in unison with the bail being dislodged from the top of off-stump. Warne roars. Gibbs is left bamboozled and so is anyone who watches this piece of action even today.

Warne went on to dismiss Gary Kirsten, Hansie Cronje, and Jacques Kallis as the game progressed – beating one in turn, flight, and length each. It was arguably Australia’s greatest win at the world stage and their greatest bowler had his name written all over it.

Warne’s greatest duels however came against two of the fellow all-time greats Sachin Tendulkar and Brian Lara. Their matchups always made for the spiciest subplots within a game. Though both the batsmen dominated Warne more than he’d have liked, the contests still made for magnificent television.

Warne unfurling his entire set of trickeries and Tendulkar and Lara negating it with precise footwork and fast hands has few parallels in all of sport. It ceased to matter after a point who came out on top for as long as this level of excellence was unfolding in front of us. In fact, conquering the Warne challenge, it might be argued, added massively to the legacy of the two batting greats.

The weight of the aura he carried often led many into believing Warne was a secretive exponent of a mysterious art that was gatekept from lesser men. Nothing could be further from the truth. Warne didn’t invent leg-spin. His wrist wasn’t a specimen of physical anomaly. He in fact had the most repeatable of actions that was impossible to not want to emulate.

It feels ridiculous for someone to be so good at something most prove to be less than ordinary at. It’s natural to wonder if it was even possible to crack the art of leg-spin with geometric perfection without any kind of genetic advantage. But sadly there wasn’t any other explanation for Warne’s genius however enchanting it was to ponder over.

The rarity of his genius though never fully dawned upon Warne himself and it showed in his post-retirement days in media. One of the most regular figures in commentary boxes across the world, Warne would often cut a frustrated figure at lack of faith put in wrist-spinners in Test cricket.

Somehow the strictly pedestrian record of every other bowler of that variety in the format was immaterial. For a man of his pre-eminence, Warne perhaps couldn’t be faulted for thinking it mustn’t be that hard after all. He never grew tired of repeating certain cricketing principles he lived by.

He’d never endorse a Nathan Lyon bowling a middle-leg line to a right-hander even if the approach found validation from data. And frankly, few could argue against a man who could literally call a wicket on air before actually executing it. Listening to Warne on commentary provided a riveting insight into his cricketing mind. It might often have come across as reeking of arrogance but perhaps the game really came to him that much easier than to most.

Despite having considerably outgrown the stories we grew up hearing, we still continue to nurture a romantic notion of our heroes somehow being immune to mortality. There’s a reason the rest of us are rather contemptuously referred to as lesser mortals. Their passing is therefore never easy to come to terms with. Warne’s in particular is even more distressing given its suddenness. 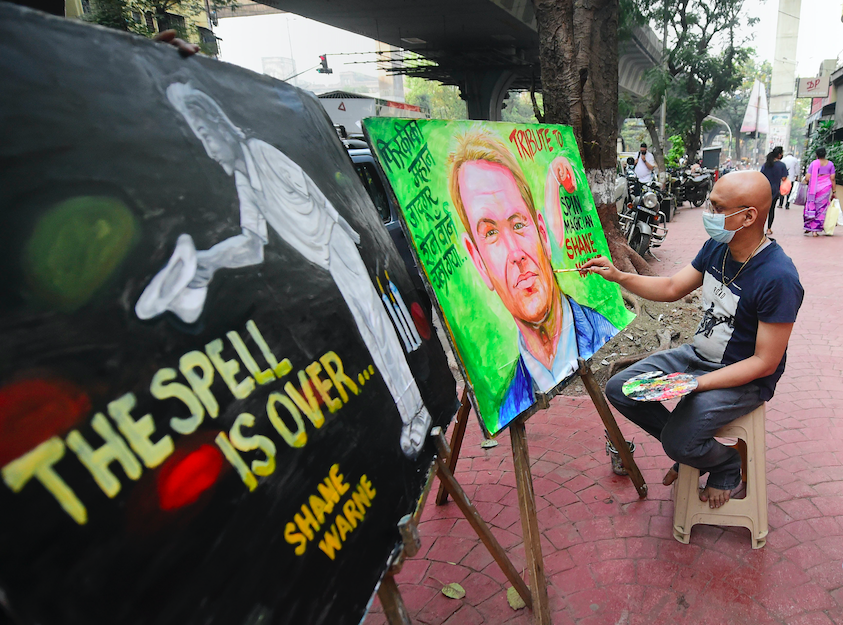 An Indian artist Sagar Kambli makes a painting of Australian cricketer Shane Warne as a mark of tribute to the cricketer, on a sidewalk in Mumbai, Saturday, March 5, 2022. Photo PTI

A prolonged stretch of illness accompanies misery and morbidity but it prepares one for the inevitable. Whereas the death of the other kind saves everyone the trouble of seeing their heroes devolve into an unrecognisably squalid version of themselves but the grief takes far longer to settle.

Among his contemporaries, Warne is the first cricketing superstar of his stature to succumb to the ultimate truth of life and he did so without a moment’s notice. This is probably the closest we’re going to come to figuring what it must’ve been like to stand in the middle while he spun webs around the bat.

And at the risk of repeating a rather tired rhetoric, there was never a dull moment with Warne on your screens. Perhaps a life this colossal didn’t deserve to end the way we’d have preferred. That’d have been too plain and boring.

We were all richly fortunate to have remained those unnoticed non-playing characters in his world while he weaved his magic. And who is to deny that lent some serious meaning to our otherwise largely inconsequential being?