The Queen's Gambit: A Thrilling Look at What Could Happen in the World of Chess

No female player on Beth Harmon’s lines appeared on the chess horizon, and even Grandmasters such as British great Nigel Short explain this as a consequence of the “hard-wired” nature of the difference in abilities of the two sexes. 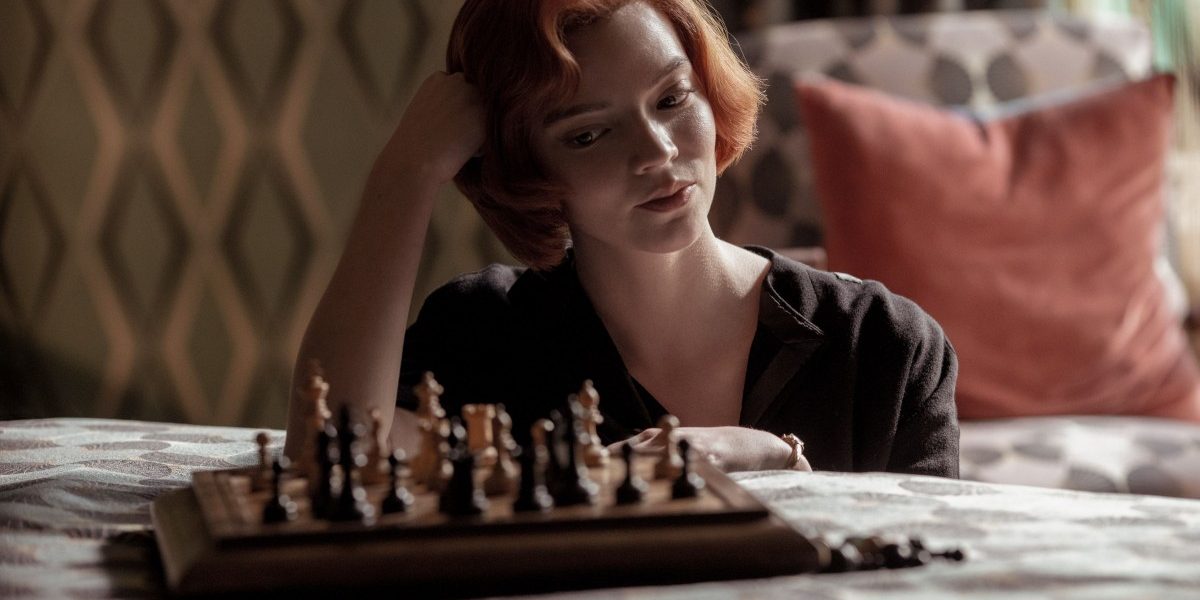 A still from 'The Queen's Gambit'.

At the very first chess tournament the young protagonist of Netflix’s original miniseries The Queen’s Gambit, Beth Harmon, enters, she inquires if there are any laws preventing girls from competing in the “Open” section. The organisers tell her, technically, she could do so, but only after explaining to her the suicidal nature of her idea, as three of Kentucky’s – Harmon’s home state – best players, all male, would be playing in the Open section and they would destroy her.

Their advice: girls should play with girls, and that’s where they start Beth’s career in competitive chess, with a game against another girl Beth beats in record time. As narrow as the scope of this advice is, it is an improvement on Beth’s introduction to chess in the basement of an orphanage dedicated to producing ideal Christian girls ready for adoption by any means necessary, when Mr Shaibel, the janitor who would be her first coach, refuses her a game saying: “Girls do not play chess.”

Both these scenes serve beautifully to contrast The Queen’s Gambit’s protagonist against the empirical realities of competitive chess for the time in the 1960s in which it is set: On both occasions, Beth disregards the advice automatically, and eventually ends up converting her detractors into fans once allowed to play, and sets up the gold standard for what girls can do on the 64 squares with her play. However, on the way, the show deploys several ways to establish the strength, weaknesses and symbolic value of Harmon as a female creative genius in the chess world of the 1960s, and the factual accuracy of her advisors’ comments for its time. Wherever Beth excels, she always faces men, board after board, hall after hall, tournament after tournament.

The show is based on Walter Tevis’s 1983 novel of the same name, and it does a marvellous job of faithfully recreating the Cold War era realism of the 1960s of Bobby Fischer’s heyday. The show is obviously inspired by Fischer’s legend, with the startling exception of the great American genius being a girl, and Beth’s advisors would have found ample support from the greatest Grandmasters of the game. Fischer himself would have considered the portrayal of a genius of his calibre by a girl a glaring insult. He believed women are not smart enough to play chess, which is only an extreme expression of what another legend, Garry Kasparov would say decades later when he doubted if women had the aggression necessary for the merciless psychic battles of chess at the highest level.

Also read: Queens on the Board, Pawns in the Sport – the Underrepresentation of Women in Chess

This was the dominant perception of women’s ability to play chess when Tevis’s novel came out, and it was empirically borne out. No woman in the history of chess had ever seriously competed to be anywhere close to the best player of the game, let alone be its greatest creative genius in history. Some critics, therefore, disparaged Beth’s character as a flight of fancy in the 1980s, and this tradition continued for years after such reviews. No female player on Harmon’s lines appeared on the chess horizon, and even Grandmasters such as British great Nigel Short explained it as a consequence of the “hard-wired” nature of the difference in abilities of the two sexes.

Decades later, the search for a female World Champion in chess seems far from concluding; the best active female player, Hou Yifan, ranked 89th in the world. “Open” sections in chess tournaments continue, and even in the 2018 chess olympiad no woman represented their country in the Open section. Regardless, Scott Frank’s adaptation of Tevis’s novel has been celebrated for its bold choice of the protagonist’s gender, and serves to show the evolution of the debate on the contribution of innate sexual differences to chess-playing ability.

Almost all of the credit for this goes to one family whose entire history reads as if designed to bust the stereotype of “genius”: The Polgar sisters. The second of three sisters, Judit Polgar, was the first to beat a World Champion, Kasparov, and broke Fischer’s record by becoming the youngest Grandmaster in the history of the game for her time. Considering the age at which Beth starts to play and beat adult males regularly in high tier chess tournaments, Judit’s career would closely match the fictional genius of Tevis’s novel, released well before the Polgar sisters’ arrival on the horizon.

Judit and her elder sister, Susan Polgar, also a Grandmaster, were raised in an experimental parenting setup which was literally advertised to produce geniuses. This, at a time when the predominant conception of genius was that it was an innate rational ability for something, independent of the circumstances of its existence. By contrast, Judit and Susan were raised to be geniuses by their foster-parents who believed that nurture was all there was to producing genius, no matter what the nature. The sisters’ careers have since proved to be something of a proof-of-concept for this radical perception, and a Black Swan event in the world of chess.

For example, Judit’s career is critical to Kasparov’s and many others’ change of heart at the highest level of the royal game. Therefore, her word that women can perform at the same level as men, given the right circumstances and motivation, carries enormous significance for obvious reasons. Judit’s performances have proved her thesis, and almost single-handedly pushed the explanatory framework for female success in the game away from “hard-wired” essentialist notions. Experts now largely cite economic and sociological factors such as the lack of role models, coaching facilities and motivation to explain why there are fewer girls participating in chess. Hence, the pool from which the next Polgar or Beth Harmon can emerge is significantly smaller than for men.

For its part, the show incorporates this aspect of perceived deficiency into Beth’s experience of her chess career. Being a little girl in almost every room full of men who’d consider it a cardinal insult losing to her, Beth is often underestimated in tournaments before her reputation travels, and arouses much anger when she crushes a seasoned veteran. When she is interviewed for magazines, she’s celebrated more for being a woman than the marvel of her games, and needless to say, she hates it. However, the show uses this gendered lens to explore Beth’s psyche as well. Never is she shown to be dwelling explicitly on the gendered inequities of the game, or speaking about sexism in chess. Instead, Beth communicates on the board where she feels in control, where she can talk freely, and it is her games which answer questions about the talent, aggression and maniacal ego of female genius.

Beth’s style is incredibly aggressive; it is here that she channels her anger and scares her opponents long before their castles have actually been breached. This is a far cry from traditional conceptions of feminine gentility and grace, and that makes Beth a role model of creative genius for women in the show’s fictional world. After her first game, the girl she beats tells her she’d “never seen anything like it”; the same girl later comes to cheer her before she meets the American champion. By the time Beth beats the World Champion, women flock in droves to her games, and she ignites a passion for the sport in females.

Also read: The Chess Player That Mocked Her Opponent

Evidence of this can be seen from the careers of the Polgar sisters, and serves to demonstrate the argument for role models’ impact on participation, especially in the sphere of sport. These factors are now seen at the forefront of explaining why no woman since has replicated Judit’s results, and why there is still no female representation in the top 20 of chess professionals to this date. It also serves to demonstrate the farsightedness of Tevis’s character and his faith in the possibility of a fictional role model for women that might provide the conditions of production for a real one.

Having said that, the debate on the role of innate gender differences on chess ability is still raging. For example, while two-time American champion Jennifer Shahade strongly supports the nurture side of the argument, Indian Grandmaster and former women’s World Champion Koneru Humpy favours the view that men are simply better than women at chess. For its part, The Queen’s Gambit follows Aristotle’s dictum of fiction being not about what would happen, but about what could happen, and in its intimate and thrilling portrayal of a new brand of sporting genius has done women in the sport a great service.

Binit Priyaranjan has a masters in philosophy from St. Stephens College, Delhi.