Vladimir Putin has been making implicit overtures even to those whose propaganda machine is driven by the impulse to isolate Russia. Moscow: In an interview to The Blizzard before the 2016 UEFA European Championship in France, Russia’s then coach Leonid Slutsky recalled life in the Soviet Union. “We didn’t know that there were countries where people live better. When you opened the last page of the geography textbook, you read there that the USSR is in first place in all key spheres… You believed 100 per cent in all that and there was no place for doubts that you lived in the best country in the world.”

It is a message which Vladimir Putin is all too keen to stress, even now –but the Russian football team does not feature in that conversation. Until Thursday, it was cause for national embarrassment. Its continuing failures cast a long shadow over Russia’s plans for a successful World Cup at home.

For a few days though, the home fans can take pride in the national team. A 5-0 win for Russia over Saudi Arabia in the opening game was least expected, and Putin’s bemused reactions from his plush seat equally so.

The victory aside, the Russian president’s appearance at the Luzhniki Stadium was among the highlights. Huge cheers went up when he rose to speak. The spectators’ made their pleasure obvious every time the camera panned to his face on the evening. The colours of the opening ceremony and the joy of victory meant that Putin was more than happy to associate himself with the team. His aversion to sport following the Sochi Winter Olympics scandal was not a factor on Thursday.

As it turned out, it was also an occasion for diplomacy. The FIFA President, Gianni Infantino, was sandwiched between Putin and the Saudi crown prince Mohammad bin Salman. It was not just a good-natured visit to the football World Cup – greater cooperation between the oil-producing countries was on the agenda, as revealed by the official spokesperson from Kremlin. Despite the stunning gap in the scoreline, Saudi Arabia and Russia might be closer in mind than we think. As Perry Anderson wrote over a decade ago, “From one angle, Russia today looks more like Saudi Arabia with rockets, although against the waxing of its oil revenues must be set the ageing of its missiles.”

The West still holds the power

Generally, a meeting of countries has been a strong underlying objective in the narrative shaped for the World Cup. Hosting the tournament also presents an opportunity for Russia to realign itself politically. Some hints were dropped along the way when the Russian delegation voted for the joint US, Canada and Mexico bid, which won the right to host the 2026 World Cup on Wednesday. The move suggested that implicit overtures are being made even to those whose propaganda machine is driven by the impulse to isolate Russia.

However, any attempt at understanding Russian influence on the geopolitical front can’t overlook the imbalance which colours its relationship with the prosperous West. As Tony Wood noted last year, “The paradox of Russia’s recent resurgence is that, for all its refusals to fall into line with Washington’s priorities, it is still in no position to mount a frontal challenge to the West.”

Hosting a World Cup allows potential for reshaping the political narrative. This is especially key for Russia when its differences with the West are no longer ideological, even though relations are at their lowest since the end of the Cold War.

In the context of football administration, it is important to acknowledge that power still resides with the privileged nation states of the West. Interestingly, even though football is not among the most popular sports in the US, the Americans could not bring themselves to accept that they lost out to Qatar in the bidding rights for the 2022 World Cup. The subsequent prosecution of corrupt FIFA officials by federal law-enforcement bodies was not entirely motivated by a sense of justice.

But one should be careful to not overstate the World Cup’s impact, when the implications for a country’s foreign policy are considered. Hosting the World Cup allows for minor turns, which are not insignificant, but a paradigm shift is unlikely to materialise. There are other political strains in football that have appeared in Russia already.

As I entered Moscow from the Sheremetyevo airport last week, the boulevards were lined with advertising boards from FIFA sponsors. This is a sight that is transported every four years from one host country to another, all in the name of fighting ambush marketing. If there are any benefits to the local economy, hard evidence is yet to appear. The hike in business for a month aside, it is FIFA and its commercial partners who are the biggest winners at a World Cup.

In that sense, FIFA is no different from other global conglomerates who claim benefits by currying favour with pliant governments. The brazenness from the Sepp Blatter days persists even now; the claims of fighting corruption ring hollow. The joint US, Canada, and Mexico bid for the 2026 World Cup earned a clear advantage over its only competitor – Morocco – the moment it offered FIFA a profit of $6 billion more than its rival. If it was a one-off incident, it would have been easier to ignore.

A strange contradiction follows this issue. Even though football administrators often seek to present themselves as pioneers who want to carry the riches of the World Cup to newer pastures, Morocco has now failed to win hosting rights for the fifth time in 26 years. Mexico and the US combined hosted three World Cups between 1970 and 1994. If it is not just about money, then what is it?

In Russia, the consequences of inviting huge capital flows in the name of a World Cup are clear now. The struggling national side is the legacy of the misguided spending that followed, with a massive chunk of the funds dedicated to astronomical wages of foreign football stars and inordinately large stadiums for the World Cup. This, of course, is a continuation of a longer trend in Russian football, ever since the Soviet Union collapsed. Much like the Russian economy, private interests control the most important assets in the nation’s football structure now. 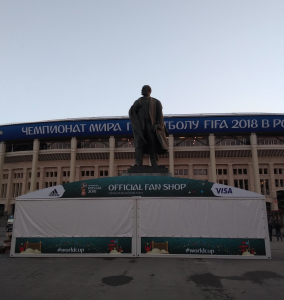 The incongruence of hosting the World Cup is summed up in Moscow right now at the Karl Marx statue, opposite Bolshoi Theatre, which is enclosed by steel barricades, with banners advertising the World Cup providing a crude background. Or for that matter, the mocking irony of a FIFA fan shop sitting below the statue of Lenin at the Luzhniki Stadium is hard to miss.

But the universalism of the World Cup, by which those invested in the tournament swear, retains its enduring charm. Even as financial and security concerns dominate, fans from the participating nations have brought riotous joy to the streets. In a managed democracy like Russia, where the term ‘democratic’ itself is in perennial crisis, the arrival of foreign nationals in huge numbers for the tournament serves a reminder of the liberal principles which have existed in the origins of the World Cup.

In Russia too, the desire for cosmopolitanism is no less strong. Historian Sheila Fitzpatrick’s words are a useful reminder. “For all the current post-Soviet nostalgia for Stalinism, nobody in Russia wants to go back to closed borders: for post-Soviet Russians, the freedom that really matters seems to be the freedom to travel.”

This freedom has been a central plank of the World Cup in Russia. Across the country, fans and journalists can use public transport for free while the tournament lasts. Whether the hyperactive cultural intermingling will alter the Russian public’s view of the outside world and of itself remains to be seen. For now, though, victory on the opening day has given them another reason to feel proud of their nation. One win will not turn Russia into the best football team of the world, but the success is likely to energise the home support. The coming days will reveal the relationship between football and Russian society better.

Priyansh is a freelance sports writer based in Delhi.