Roger Federer: The Brand That Made Tennis Less Lonely

The collective grieving and the celebration of Federer’s life in London on September 23 tells us that sport is never an individualised pursuit. 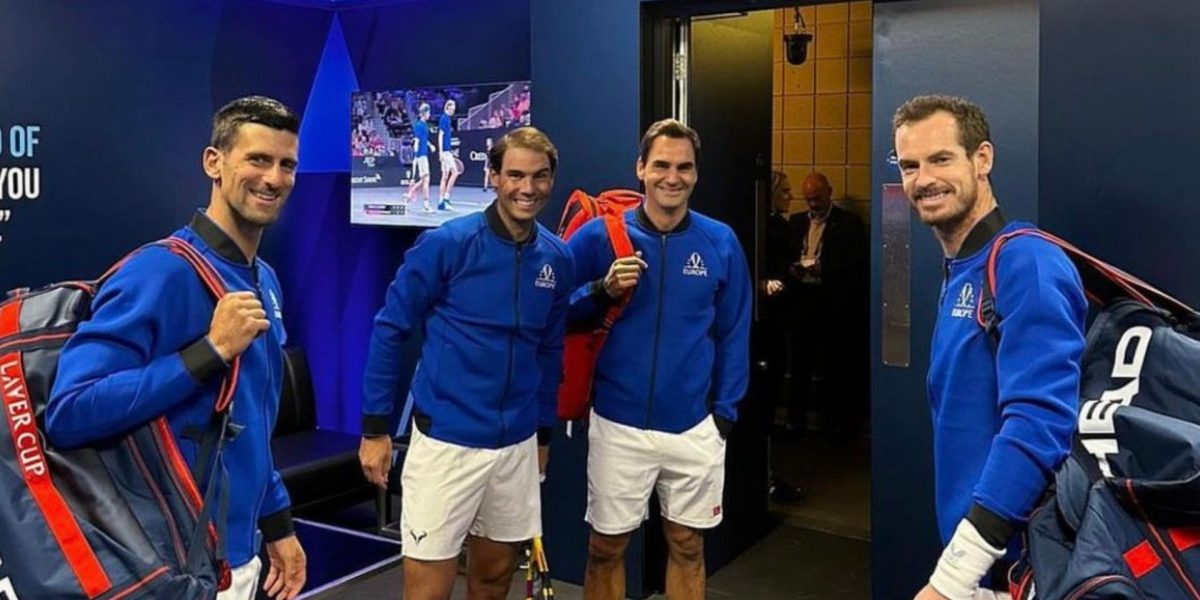 A perceptive tweet brought this to my attention first and, once you see the images besides each other, it is hard to unsee the similarity.

The famous ‘RF’ logo that has come to be the living emblem of Roger Federer’s redoubtable brand bears a striking resemblance to the Swiss Franc. While it remains unverified whether Federer’s wife Mirka Vavrinec had the Swiss currency in mind while designing the logo, Federer’s stature is certainly worth its weight in gold. His burgeoning value was acknowledged by Swissmint in 2019 when it issued a limited set of 20 franc coins in honour of the tennis star.

In retirement, as was the case during his playing career, the currency of Roger Federer’s appeal remains undimmed.

The scene of the Swiss tennis player’s farewell on Friday night, the Laver Cup, was another reminder that tennis is set to lose its most bankable asset. Federer’s business acumen has played an integral role in growing his marketability; the 2022 Laver Cup was a suitable venue for the farewell as it is Federer’s management company, Team8, that is one of the founders of the successful competition. The grand occasion of his farewell may appear to be designed for ensuring a perfect send-off but what followed was anything but. More on that later.

For now, let’s focus on why indeed Federer’s popularity is a few notches above any tennis player.

It is unlikely to be matched, even when his equally successful peers in men’s tennis like Rafael Nadal or Novak Djokovic leave the court. Another great in Serena Williams retired earlier in September but her departure was equal parts usual and unusual; although Serena played her final match at the US Open, the announcement of her retirement appeared in an exclusive essay for Vogue. Even though Serena’s departure was met by a glorious tribute in New York, the reaction to Federer’s retirement touched higher decibels. On September 15, Federer revealed his decision on social media and decided to end his career with a doubles match alongside his friend and greatest rival Rafael Nadal.

To my tennis family and beyond,

For those who were left wondering whether they would see Federer and Nadal on the same court again, this was a near-perfect wish fulfilment.

The doubles match also marked an end to the long break Federer had from professional tennis, owing to the injury-enforced absence since Wimbledon 2021. Although he had been past his best for a while, it is worth remembering that, only two years ago in the summer of 2020, Federer had become the first tennis player to top the Forbes’ list of highest-paid athletes in the world. His earnings on the court were minuscule in comparison to the money flowing from endorsements.

Federer’s personable demeanour on and off the court may seem a natural fit for the sponsors now but his value as a marketable figure took its time to grow, as Christopher Clarey recounted in his painstaking biography of the tennis legend. Federer made it work by pushing doors that other athletes would seldom approach.

It certainly helped that Federer can speak eight languages, as sponsors from the world over queued up to sign the polyglot star for sums that tennis players would not usually attract. But it was also his willingness to pursue business interests in a relentless fashion, and charm people outside tennis in an easy and engaging fashion that got him ahead. While most players struggled to keep their focus on tennis, Federer ensured he was readily available for sponsors even as his tennis career hit new heights. The role of his agent Tony Godsick was foundational in crafting the ‘RF’ brand, but he also had a client who turned tedious meetings into smooth operations by presenting an approachable face in public. Federer understood the expectations of sponsors by becoming a star who was not limited to just the tennis world. Ads with Hollywood stars like Anne Hathaway followed, not to forget the unlikely friendships that he would go on to forge – Vogue’s long-serving editor Anna Wintour is among Federer’s buddies.

Federer’s open courting of the elite is not served up as a celebratory facet here; rather, it is what explains why RF became the brand that it is today. Of course, it should concern us that the amount of wealth that sporting heroes earn, and the bubbles they consequently inhabit, tends to distance them from the lives of the very fans who follow their exploits with intense dedication.

But the problem of celebrity does not limit itself to tennis, even team sports are not safe from its clutches. However, as a savvy and urbane operator, Federer was attuned to the demands of his life outside the tennis court better than most. The tennis legend’s distance from controversy and scandal also ensured he remained a shiny lodestone.

But the appeal of the RF brand and its bounteous marketing appeal is one side of the story of Federer’s career. The tearjerker farewell in London on Friday night undercut some other important assumptions that are often easily associated with the retiring tennis hero. Federer’s brand, his charm and grace, and his tennis are often entwined to highlight his individual brilliance.

The argument goes that it is not just that he talks in a graceful manner, he plays in a similar vein as well. Perhaps, such a direct connection that emphasises individual attributes is easier to imagine in a sport where the competition is between two people.

Yet, that position risks overlooking a more complex story about tennis. Throughout his career, and even in the week leading up to his retirement, Federer keenly demonstrated the community-driven character of the sport. Yes, tennis matches are often played between two individuals but they are hardly ever a contest between them alone. The unusual sight of watching Federer’s peers tear up as his retirement became official on Friday night shed light on this reality.

When Federer decided to call it a day, he chose the Laver Cup as his site to bid goodbye because he did not want to feel “lonely”. Tennis players often talk about the painful nature of their work as they find themselves undertaking a solitary endeavour, especially those with less financial resources who cannot afford to travel with a coaching team. By participating in a team event, Federer ensured that he would not suffer alone on his final day as a professional. The occasion was made possible by a community of fellow competitors who came out to support him, including some who he could count as friends.

The emotional outpouring at the end took us by surprise because the narratives that we commonly encounter in tennis are about winning and outdoing your rival. Take the case of Rafael Nadal and Federer and the fallacy of such beliefs is quickly exposed. 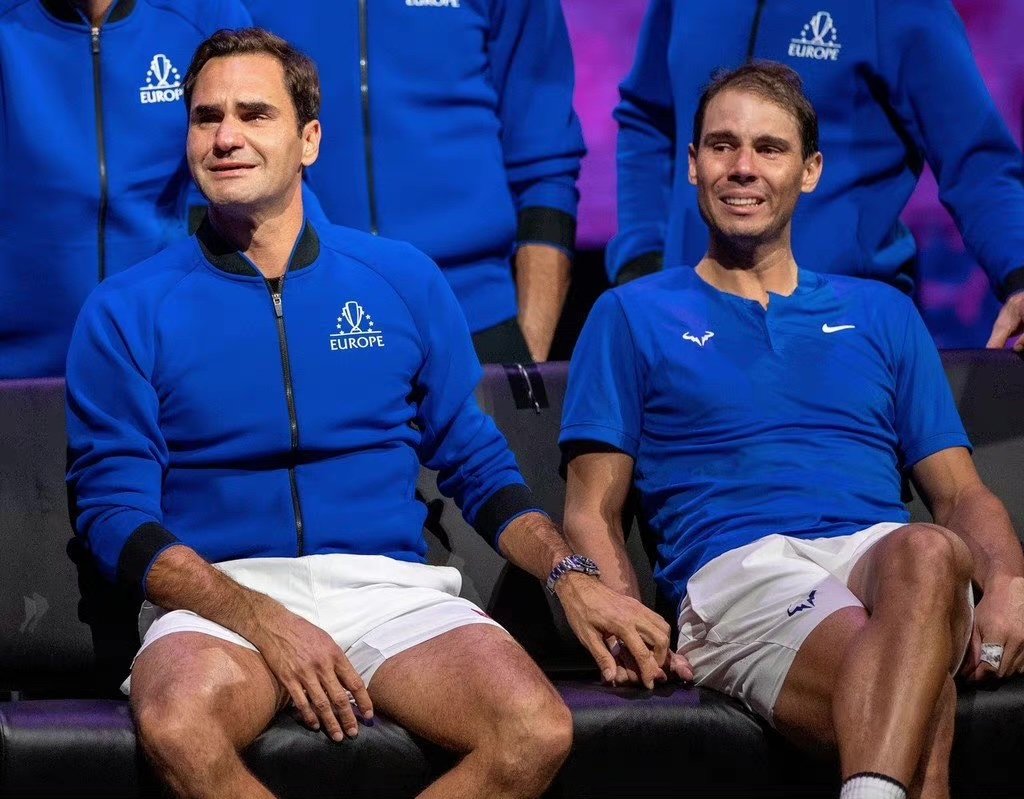 Nadal and Federer after the latter’s final match. Photo: Twitter

Throughout their career, the enduring question has been about the greater tennis player among them. While the intense matches between Federer and Nadal provide enough fodder for such discussion, a truly remarkable story was simultaneously underplayed. Over the last decade or so, Federer and Nadal went on to become the closest of friends. Although it is an example like no other in professional sport, only in recent years have we got a glimpse into the actual relationship between the two rivals.

Going by the popular narratives, we were unlikely to arrive at this story as undue focus on winning and individual success tends to win out. The competition between Federer and Nadal drew its strength from a different well as the mutual respect the two friends held for each other became the dominant theme. The great contests never stopped but they were not just down to individual brilliance and genius.

We can go beyond the Nadal-Federer friendship. One of the most famous essays about Federer is the much-cited piece by David Foster Wallace – ‘Roger Federer as Religious Experience’. Enchanted by the aesthetic pleasures of watching Federer strike the ball with a racquet, Wallace leaned on the overused crutch of the sportswriter – characterising brilliance as divine intervention. Going over Federer’s game and his style in copious detail, Wallace concluded that the ecstasy aroused by watching the Swiss maestro’s exceptional skills in action could be legitimately termed as religious. The writer added that Federer’s subtlety and style marked a new dawn of greatness in men’s tennis.

The intoxicating combination of power and deftness embodied by Federer was indeed remarkable but, in his essay that served as a living testament to the tennis star’s exceptional ability, Wallace offered a piece of writing that did not shift the idiom of sportswriting. Instead, it merely reciprocated the popular terms of its practice. Of course it was not just Wallace who was guilty of such complacency while writing about Federer, although he did come to be its most recognisable offender.

Most of the popular writing on Federer emphasises his graceful, balletic movement on the court, with countless invocations of class and grace when it comes to his playing style. The level of detail in Federer’s repertoire can certainly explain why he is a great tennis player but the people in Federer’s life who made the greatness come into existence do not appear as often. Wallace did list those factors, almost as a matter of inconvenience, while stating that one could read about them elsewhere, but they were not central to his theses on Federer. 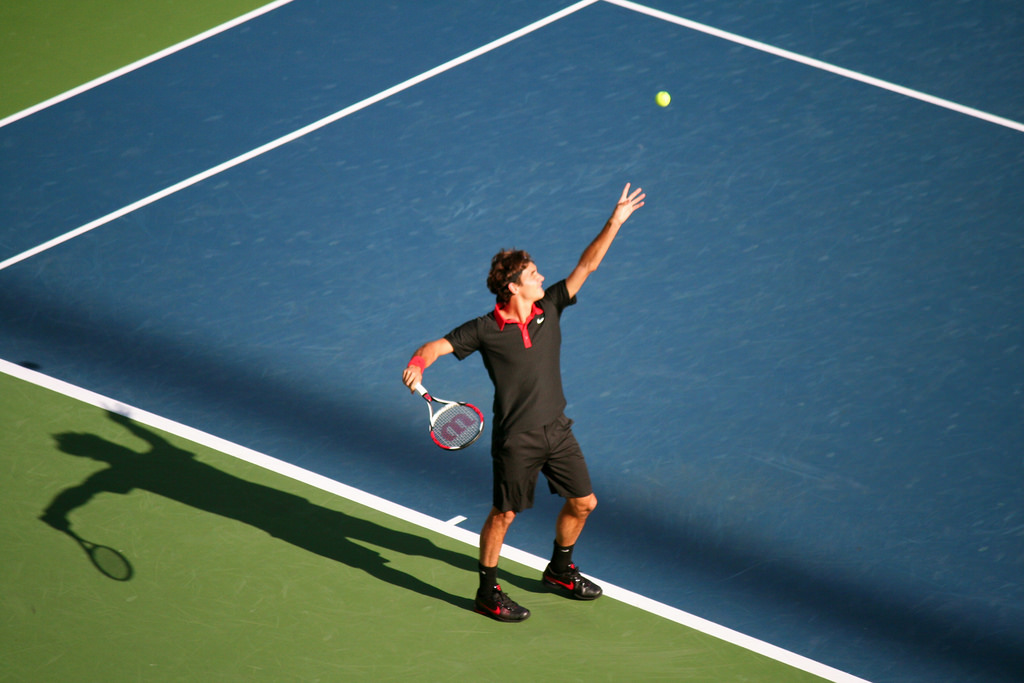 Working on Wallace’s terms, I would offer a different position. The stylistic characteristics of Federer that Wallace obsesses over are not merely an individual’s interpretation of tennis shots.

Speaking about his earliest coach Peter Carter who passed away in an accident in 2002, Federer noted, “Peter Carter had the biggest impact on me in terms of my technique. That’s what so many people talk about.When they talk about my effortless style and technique, I guess. I was able to perfect it later in my life, but he [Carter] set the foundation.” Since Wallace was enchanted by how Federer played the game, one would think that we could learn from his essay what it was that Carter had laid the foundation for, and how Federer interpreted his coach’s instructions. Unfortunately, Carter got only an unnamed mention for the influence of his accidental death on a young Federer in Wallace’s essay.

Perhaps, then, we need a different kind of writing to appreciate the unusual scenes on Friday night.

A kind of writing that does not walk into the thicket of the individual’s skill and craft without losing appreciation of the ecology which sustains the verdant space of success. There are other religious experiences related to Federer, and we got to witness one in London on Friday. The importance of Federer to everyone present in London was unmistakable by the end of the night. Watching the people close to him hold it together until the end, and then fall off the emotional cliff, was the kind of sublime experience that could be accurately termed divine. It was a rare, communal gathering that made its peace together about the inevitable departure of Federer.

A surprising revelation no less, where not just Federer’s family but even upcoming stars like Casper Ruud could not hold it together. Even though sport’s yarn-spinners are keen to tell us otherwise, sport is never an individualised pursuit.

The collective grieving and the celebration of Federer’s life tells us something else.

Priyansh is a Ph.D. student researching sport and politics at the University of Toronto. He tweets @Privaricate.