The Mizoram native's disarming smile and articulate nature, coupled with an ability to hoist weights more than two and a half times his own weight, make him a favourite with both the media and fellow sportspeople. 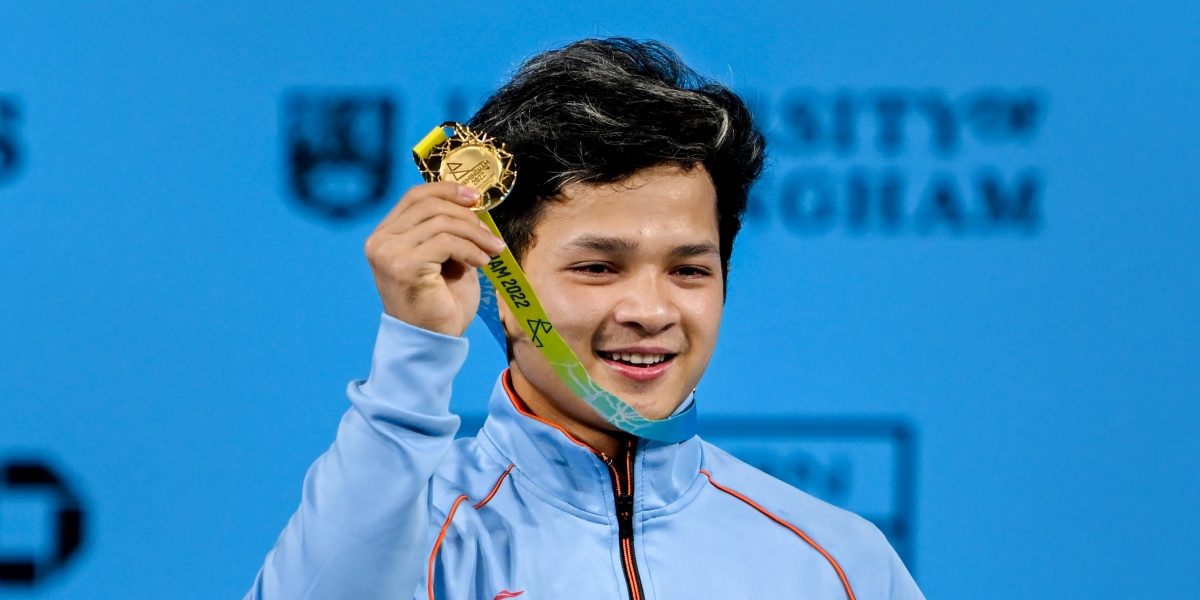 Birmingham, UK: There is something so endearing about Mizoram weightlifter Jeremy Lalrinnunga that maybe even his opponents don’t mind finishing behind him. His disarming smile and articulate nature, coupled with an ability to hoist weights more than two and a half times his own weight, make him a massive favourite with both the media and fellow sportspeople.

Once the gold at Birmingham had been decided, Jeremy’s opponent Vaipava Nevo Ioane, his friend since 2019, put his Samoan garland around Jeremy’s neck as a mark of respect and affection. Also, Jeremy wears his heart on his sleeve and the story of his life is tattooed on his arm. The boxer on his arm is his father and the weightlifter is himself. The inscribed dates, too, have a meaning – 7/7 is his mother’s date of birth, while 11.11.2011 is the date he started lifting and 1988 is when his father started boxing. Jeremy wanted to pursue boxing and fulfil his father’s dream, but was told he was ideal for weightlifting. They were right.

The 19-year-old gregarious Jeremy said, “I have had an elbow injury for a while, but I prepared well and tried very hard today. I could not reach my best performance but Jesus helped me get this gold medal.”

There was a big scare before the event. Jeremy had cramps and tightness. Not only could the gold medal have eluded him, but he also ran the risk of serious injury that could affect his career.

Jeremy started with a 136 kg snatch after everyone else had finished, with Nigerian Edidiong Joseph Umofia’s 130 kg the next best. Jeremy raised it successfully to 140 kg for a new Commonwealth Games record, but his third and final attempt at 143 kg ended in failure. Nevertheless, at 140 kg, he had a 10 kg lead over his closest competitor heading into the clean and jerk, where he lifted 160 kg for a 300 kg total.

Jeremy was successful with his first clean and jerk effort of 154 kg but seemed to have injured himself. He went on to 160 kg before failing at 165 kg. Samoan Ioane lifted 127 kg in the snatch and 166 kg in the clean and jerk for a total of 293 kg but failed at 174 kg, which he attempted to try and overhaul Jeremy.

Jeremy revealed, “My coach really motivated me, especially when I got injured during the warmup. I prayed and cried a lot but now I am feeling better and am very proud. The warmups were good but after a point my thigh muscle began to cramp. I wasn’t able to walk for a while. But the coach egged me on.”

He added, “After I failed the last (C&J) lift, I cried a lot and asked the coach, ‘Medal aya ki nahin? (Did we get a medal?)’. The coach told me, ‘Gold hai hamara (The gold is ours)’ and it soothed my nerves.”

He admitted, “When my opponent went for 174 kg I completely blanked out and was clueless about what was going on around me. I cried a lot. The coach managed all the weights and ensured that I landed the medal safely. He was very good at calculating and ensured there was no self-doubt.”

Jeremy’s father Lalneihtluanga was a well-known boxer in Mizoram but financial difficulties meant he had to give it up to take care of his family. Jeremy was steered towards weightlifting and trained with bamboo sticks and water pipes. The dream had been born.

He was drafted by the Army Sports Institute (ASI) and by 2012, he was practising weightlifting under professional guidance. A quick learner with immense talent, Jeremy won gold in the 2018 Youth Summer Olympics in Buenos Aires in the 62 kg category. He also won silver at the Asian Weightlifting Championships and was 21st in the 67 kg category at the World Championship but topped the Commonwealth Championships in 2021.

Now he has a gold from the Commonwealth Games which, coupled with his inborn never-say-die spirit, will make him ready for the next big goal ― Paris 2024.

V. Krishnaswamy is a senior sports writer and commentator.