Peruvian President Pedro Castillo imposed the curfew in Lima and neighbouring port city Callao, banning people from leaving their homes in an attempt to curb protests against rising fuel prices amid inflation. 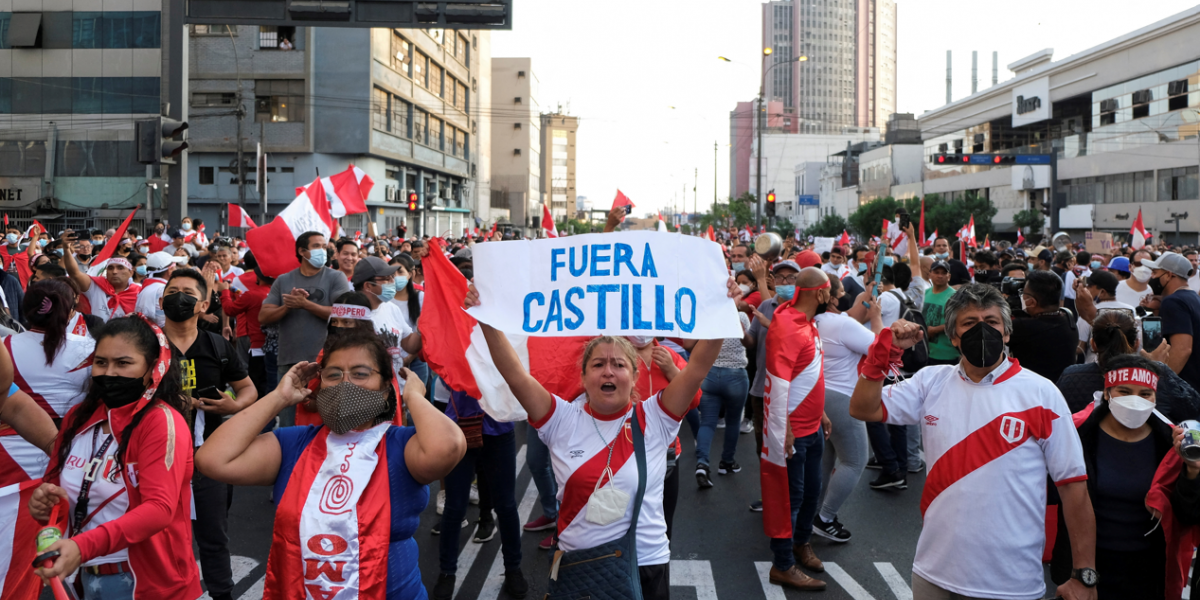 People protest against Peru's President Pedro Castillo after he had issued a curfew mandate which was lifted following widespread defiance on the streets, as protests spiraled against rising fuel and fertilizer prices triggered by the Ukraine conflict, in Lima, Peru April 5, 2022. The sign reads "Castillo out." REUTERS/Liz Tasa

New Delhi: Indian shooters competing in the International Shooting Sport Federation (ISSF) World Cup in Lima on Tuesday, April 5, woke up to scenes of protests that caused roadblocks and “acts of violence” in Peru, leading to imposition of a curfew in the capital.

Peruvian President Pedro Castillo imposed the curfew in Lima and neighbouring port city Callao, banning people from leaving their homes in an attempt to curb protests against rising fuel prices amid inflation.

The Indian men’s skeet team of Parampal Singh Guron, Amrinder Cheema and Munek Battula, along with coach Vikram Chopra, stayed back to participate in their event, even as the others returned home after taking part in their respective competitions of the shotgun world cup.

“Curfew has been imposed in Peru but the Indian shooters are safe. The local organising committee is there to help in case they need anything,” a National Rifle Association of India (NRAI) source told PTI on the condition of anonymity.

With reports of roadblocks trickling in, there were concerns initially as to how the shooters and the support staff would leave for the airport. But a federation insider said the coach has been in touch with the NRAI and has “assured that the road to airports would not be shut down”.

“We don’t know if the situation there is like Sri Lanka or not but we have heard from the coach that our team is fine… no problem and the competition is going on. Tickets are booked for day after tomorrow. Yes, there are jams and blockades on the highways but the road to airport is open.”

“In fact, Juan Giha, who is the skeet coach of Peru has apparently said that there is no problem as far airport road is concerned. It is under control.”

The tournament concludes on Wednesday.

On Monday, protesters burned toll booths and clashed with police near the southern city of Ica.

The decision of the country’s authorities comes after Peruvian transport workers blocked major highways on Monday to protest against rising fuel prices and inflation.

Also read: FIFA’s Rare Suspension of Russia Dismantles the Idea That Sport Can Be Apolitical

Meanwhile, it has been learnt that the NRAI has recommended Austrian shooter Thomas Farnik for the post of the foreign rifle coach, left vacant after the departure of Oleg Mikhailov.

The Sports Authority of India’s (SAI) will need to approve it before the six-time Olympian and world cup gold medallist is appointed as the coach.

As far as trap is concerned, legendary Australian shooter Russell Mark, who had won gold in men’s double trap at the 1996 Atlanta Olympics and followed it up with a silver at the 2000 Sydney Games, is in line to take up the position of the foreign coach.

It must be noted that Russell had guided Rajyavardhan Rathore to the double trap silver at the 2004 Athens Olympics.

In the case of pistol shooting, three-time Olympian champion, Ralf Schumann of Germany, was considered but it did not work out.

Indian shooters will not participate in the ISSF World Cup in Rio de Janeiro, scheduled from April 9 to 19, while only the rifle team will compete in the combined World Cup in Baku, Azerbaijan from May 27 to June 7 as the pistol shooters had expressed their interest to continue their training at home.