In Sushil Kumar’s Fall From Grace, a Cautionary Tale About National Heroes

A more holistic view of athletes would help us to see them as rounded human beings, and not just as wrestlers or cricketers, in addition to dispelling the false notion of sport as a meritocratic endeavour. 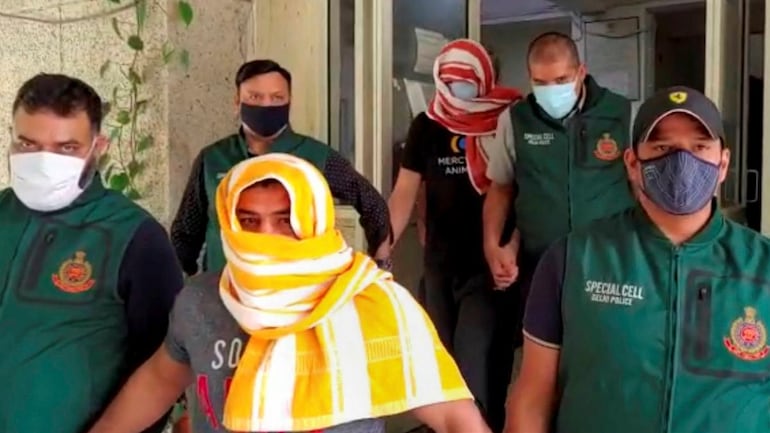 Olympic medal-winning wrestler Sushil Kumar and his associate Ajay Kumar after they were arrested in connection with the Chhatrasal Stadium brawl that led to the death of a wrestler, in New Delhi, Sunday, May 23, 2021. Photo: PTI

Last Sunday, as Sushil Kumar was arrested by the Delhi police, the charade of wrapping his face in a towel fooled nobody. While his identity was being protected, as the legal process dictates, there was no mistaking the wrestler for someone else. One of the most recognisable names in Indian sport found himself in the most repugnant of situations. Sushil and his friend, Ajay (alias Sunil), had been on the run ever since fellow wrestler Sagar Dhankar was murdered in a brawl at the Chhatrasal Stadium on May 4.

The site of the murder was incongruent, to say the least. The training facilities at the stadium, popularly called the Chhatrasal akhada, symbolise the power of Sushil Kumar’s appeal. As Jonathan Selvaraj demonstrated in his illuminating piece, the venue has been the centrepiece of the wrestler’s story ever since he arrived there to train at the age of 14. Indeed, the stadium itself has undergone a transformation that mirrors both Sushil and Indian wrestling’s change in fortunes.

No wonder then, that popular commentary has been marked by shock and surprise in its response to Sushil Kumar’s ultimate fall from grace. This is certainly not the first time that the 38-year-old wrestler has courted trouble. The shady circumstances under which Narsingh Yadav had to pull out of the 2016 Rio Olympics after a failed dope test had already revealed to us Sushil’s outsized influence in Indian wrestling. Two years later, the worries developed when he defeated Praveen Rana during the trials for the upcoming Commonwealth Games. The bout was followed by a fight between the supporters of both wrestlers, with Rana also accusing Sushil Kumar of exercising undue influence over the referee.

Such incidents in recent years were symptomatic of the ethically slippery ground on which Sushil Kumar had come to rest. His appointment as an officer on special duty in 2016 at Chhatrasal Stadium had raised eyebrows as well, coming in the wake of the retirement of his coach and father-in-law Satpal Singh. By accepting the role, the wrestler, who was still actively competing, invited a charge of impropriety, not to mention the misgivings harboured by his fellow wrestlers. Sushil’s growing influence caused rifts, and pushed some notable names away. The public fallout between the 2012 London Olympics bronze medal winner Yogeshwar Dutt and Sushil Kumar was noteworthy.

This background heavily colours what has come to pass now, even though we wait for the legal trial to unfold. At this point, there seems little doubt over the circumstances that led to Sagar Dhankad’s killing. Reports suggest that tensions had been brewing between the two for a while. However, the motivations that could explain why Sushil Kumar may have resorted to such desperate measures remain puzzling.

The wrestler, after all, already enjoyed a level of power and influence unmatched in Indian wrestling. One may even be tempted to call Chhatrasal akhara as his personal fiefdom. The bafflement only grows when we consider Sushil Kumar’s long-standing desire to refute an old trope about wrestlers that reveals class prejudice at best. His own mother recognised that wrestlers are often thought of as goons and louts for hire, as Rudraneil Sengupta noted in his recollection of Sushil Kumar’s earlier years. The desire to reject this stereotype about wrestlers raged fiercely within the former world champion, and his two Olympic medals offered a strong counter-argument.

His recent actions may once again give rise to the prejudiced view but there’s another aspect of this situation that begs our attention. In the many engaging and illuminating works written on Indian wrestling, a recurring theme seems to dominate the analysis. The worldview of a wrestler is often explained and described through their identity as a practitioner of the craft. Even outside the pit, the argument goes, their actions are defined and demarcated by the ethos that a wrestler lives by.

The wrestler’s rich diet (vegetarian in some cases), their discipline, their unyielding devotion to nurturing and nourishing the body in preparation for the next duel, their moral prescriptions on the subject of celibacy, and a demand for an austere life are some of the dominant preoccupations. In Joseph S. Alter’s pathbreaking work, The Wrestler’s Body, these ideas are presented as the building blocks for a theory of bodily performance that informs a wrestler’s practice. The discipline, the moral values, and the philosophical ideas do not remain etched within the boundaries of the wrestling pit. Instead, they are thought to nourish the very seed of a wrestler’s worldview.

Indeed, journalistic accounts emphasise this mode of thinking as well. This is not just an imagined construct, in fact wrestlers themselves discuss their craft and their life through this lens. It was interesting, although not wholly surprising, that upon his imprisonment, Sushil Kumar asked for a wrestler’s diet in police custody (a request that was denied). This mode of thinking could be extended to athletes in other sports as well, where the very fact of playing sport for a living seems to comprehensively define the sportsperson’s identity.

While it is a useful way of analysing the lives of athletes –  especially since it does not reduce them to entertainers but extracts meaning from their practice itself – there is a glaring absence when we limit ourselves to think this way. Such a view does not pay adequate attention to the other societal pressures that come to exert their influence on the people involved in sport. If we do not reckon with the place of sport in our world, as opposed to placing sport in a silo above the world, we are likely to be disappointed when athletes turn out to be guided by motivations other than the ones that are apparently driven towards the meritocratic pursuit of success in sport.

A more holistic view of athletes would help us to see them as rounded human beings, and not just as wrestlers or cricketers, in addition to dispelling the false notion of sport as a meritocratic endeavour. Athletes, in fact, continuously respond to contradictory pressures. This is illuminated by the multiple examples of ex-sportspersons who reveal themselves as even less principled than previous administrators when it comes to running a sports organisation. Sourav Ganguly at the BCCI is a relevant example. Turns out that being a former cricketer carries little resonance in administering a game!

To make sense of this argument in the context of Sushil Kumar’s recent actions, it is imperative to reckon with the culture of sport in general. Frantz Fanon’s cautionary note about capitalist sport serves a timely warning in this context. In The Wretched of the Earth, Fanon argued:

“If games are not integrated into the national life, that is to say in the building of the nation, and if you turn out national sportsmen and not fully conscious men, you will very quickly see sport rotted by professionalism and commercialism.”

Journalistic reports in the past few years talk about a change in the demeanour of Sushil Kumar from the shy wrestler that he was in his earlier years. In the aftermath of his success, Sushil nurtured a cult following, with many aides accompanying him in most social settings, and cherished his undue control over Indian wrestling. This was not the consequence of an ingrained loutish behaviour that afflicts wrestlers. Instead, it demonstrates Sushil’s position as an exceptional, beyond-reproach figure in Indian sport, a sight not uncommon when we consider other successful athletes in the country. Just the thing Fanon had warned about in the context of developing a national consciousness through sport.

Such was Sushil Kumar’s success – still the only Indian athlete with two Olympic medals in an individual sport – that administrators, many of his fellow wrestlers, and politicians were keen to look the other way, even as reports of his misdealings grew. They remained resolute to see a national hero in Sushil Kumar who could be used as an example for his fellow citizens. A muscular male figure who leads the country to unprecedented success is of special importance to a nation that has few sporting heroes of global standing, especially for an India that is ever keener to draw from the well of masculine strength to assuage its insecurities. National heroes like Sushil Kumar, or Ganguly as the president of the richest cricket board in the world, can hence only be seen as singular figures, bereft of any contradiction. They are just a wrestler or a cricketer, lest the mask slip and a more complex reality be revealed.

Now that Sushil Kumar has decisively fallen from grace, it is likely that he will be shelved from public memory in a swift fashion. Having outlived his usefulness as a national icon, now he may only be invoked to offer a cautionary lesson. Sushil has certainly gone too far this time, for even his most ardent supporters, making his past transgressions seem like mere foibles. Yet, a more important lesson seems likely to go unheeded. It is not the peculiar circumstances of Indian wrestling or a personal failing on the part of Sushil Kumar that completely explains the circumstances that led to the murder of Sagar Dhankad. Rather, the killing of the budding wrestler serves as a severe indictment of the culture of sport in India where the few who succeed remain above criticism until it is too late.

Priyansh is a doctoral student in Physical Cultural Studies at the University of Toronto. He tweets @Privaricate.