During Infantino's time at UEFA – in his comfort zone – the European body submitted its cash-rich tournaments at the altar of commercial interests. His FIFA reign is shaping up to be no different. 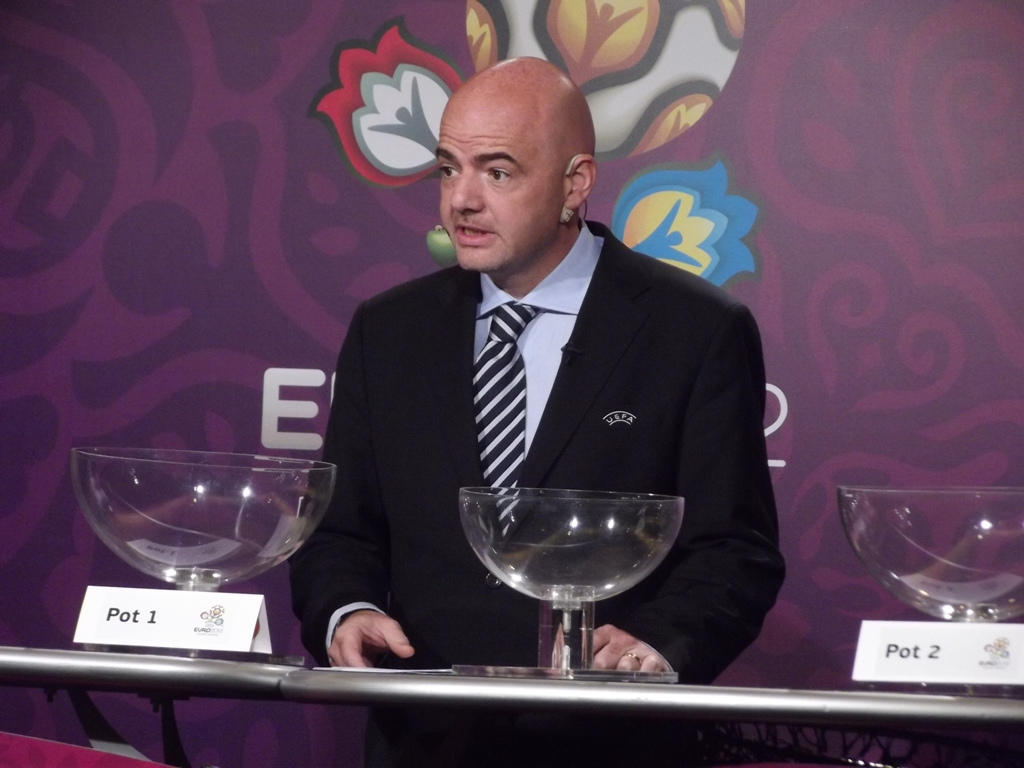 Before Gianni Infantino, even before Sepp Blatter, FIFA was headed by a Brazilian man named Joao Havelange. He passed away last August, aged 100. But the stories around Havelange’s life will last at least a few centuries. He is remembered for establishing an authoritarian model of governance at FIFA that depended on a clique of morally flexible, elite officials.

Perhaps, the biggest tribute to Havelange was paid by Henry Kissinger. Despite the mutual dislike for each other, there was a lot in common between the two. Yet, put off by Havelange’s modus operandi during the bidding process for the 1986 World Cup, Kissinger lamented, “It makes me feel nostalgic for the Middle East.” The Brazilian, however, was only working in his usual fashion. As David Goldblatt noted in The Ball is Round, Havelange remembered how he and his friends had been forced to make way for Kissinger and his forty security guards at the 1974 World Cup.

It was at the FIFA Congress that preceded that tournament where Havelange had begun his 24-year tenure as the president. The Brazilian rose to the post on a promise of expanding the World Cup to 24 teams, among other commitments to ensure the widespread development of football. From its inception in 1930, the tournament had featured 13 to 16 teams. In fact, the British home nations, Germany and Central European countries chose to stay away from the inaugural World Cup as the event in Uruguay featured low on their priorities.

The situation had changed by the time Havelange assumed the presidency. FIFA was sitting on a goldmine and gradually recognising its business potential. The World Cup had grown into a tournament of immense significance. Everyone wanted to be a part of it. Only eight years before, in 1966, sixteen African nations had boycotted the competition in England as they were not even assured of a single qualifying spot. Havelange built a successful political campaign on the shoulders of resentment.

It was in 1982 that he was finally able to deliver on his promise of a 24-team World Cup. A successful tournament in Spain ensured there was no going back. It was under Havelange’s presidency that a 32-team tournament was ratified as well. The opaque model of governance drew its legitimacy from the support of rich administrators who belonged to countries that had traditionally been on the margins of football’s power circles. A slice of the World Cup pie ensured a smooth transition to the presidency of Sepp Blatter, Havelange’s right-hand man.

However, the turmoil in FIFA over the last two years meant that many of Havelange’s friends could no longer enjoy their cushy privileges. The new boss Infantino, though, may not have ensured a clean break from the past – the message on which he built his campaign— as the expanded 37-member FIFA council unanimously approved a 48-team World Cup on January 10.

Through this move, Infantino has strengthened his support among the 211 members of FIFA. While presenting himself as a candidate who was not knee-deep in mud like his predecessors, the current president had also promised a 40-team World Cup during the campaign. But an unwieldy tournament format put paid to his plans. Surely, it should have been laid to rest there. Never before had more than eight teams be added to the World Cup finals tournament.

But Infantino remained adamant. “It means we continue with a normal World Cup for 32 teams but 48 teams go to the party. Fifa’s idea is to develop football in the whole world, and the World Cup is the biggest event there is. It’s more than a competition, it’s a social event,” said the FIFA president when he unveiled his proposal in October.

Of course, a social event that would not happen without the promise of riches that it brings. FIFA estimates that nearly $1 billion will be made from the domestic markets of additional teams that will qualify, while a profit of $640 million is in store from television rights and sponsors. The cash cow will be milked till a breaking point arrives.

In his election promises, Infantino had also proposed to offer $5 million annually as development funds to each FIFA member. It is easy to understand now where the money will be secured from. A mix of Havelange’s and Blatter’s policies are likely to ensure Infantino emerges a stronger figure after his unexpected win in last year’s election.

Europe’s governing body, the Union of European Football Associations (UEFA), had supported his candidacy but had largely opposed the move to increase teams in the World Cup. The European support was won by promising more spots at the tournament.

It is important to stress, though, that there was no golden age when FIFA was impervious to political pressures. Indeed, at the inaugural tournament, France and Belgium participated because the then-president and vice-president of the governing body were able to bully their respective countries into submission. Moreover, Romania appeared in Uruguay because King Carol had bestowed his support to the World Cup.

In the current scenario, one of the foremost critics of the current move, the European Club Association (ECA), works to protect the interests of the richest clubs in the world. The body is as driven by commercial imperatives as any other.

However, what this decision does to the World Cup as a spectacle that promises to pit the world’s best against each other is more problematic. The last World Cup had begun with the wearied apprehension that the 32-team event produces a sterile fare with quite a few unappetising encounters. However, a thrilling tournament came to pass as the traditionally weaker sides offered a challenging front. It was a World Cup to remember, like the one in 1982. Attacking football and goal-fests made for terrific viewing. Even when there were not many goals, there was plenty of narrative and drama to whet the appetite.

It does seem pretty remarkable that FIFA would try to alter a format that had finally delivered on its promise. It had seemed like the perfect compromise between developing the sport and ensuring that the World Cup remained a spectacle. If it ain’t broke, don’t fix it. But a staggering addition of 16 teams is likely to produce more dull encounters, in addition to throwing up quirks of a format that had seemingly been discredited. Three-team groups offer the possibility of two sides deciding on a mutually agreeable result for the final game. It can turn into a farce. You think it won’t happen? The Disgrace of Gijon, when West Germany and Austria conspired to an outcome that would eliminate Algeria, wunderkid of the 1982 World Cup, will put your doubts to rest.

… and a form of social exclusion

If the experience at last year’s Euros is anything to go by, a sudden increase in the number of teams usually produces underwhelming results. Twenty-four teams made for a bloated Euros. Iceland and Wales scripted romantic fairytales in France but their competence was not a result of the expanded tournament. Sides worthy of playing in a major tournament are rarely hurt by treacherous twists of fate.

Hence, a 48-team World Cup is unlikely to provide sporting contests of the highest quality. If anything, the group stages will feel like a longer preamble to the ‘real thing’. But 135 of FIFA’s 211 members are yet to participate in the showpiece event and they want a taste of it. Some major markets like China continue to miss out. No wonder then that President Xi Jinping has made a decisive push to transform the country’s fortunes in the realm of football.

As the academic Chris Anderson noted on Twitter, more nations inevitably lead to more teams at the World Cup finals. However, he added that the percentage of countries participating in 2026 will be the highest since 1934. Indeed, nearly a quarter of the nations will be represented in about nine years’ time at the World Cup. It is difficult to see how this amplifies the quality of the tournament.

Not clear it's a safe assumption that number of countries will continue to grow. But even if it doesn't, % still same as 1934. pic.twitter.com/NCmAAEddgB

When the World Cup was first televised in 1954, there were less than 50 million television sets in the world. The majority were located in North America, which did not become a major market for football until the 21st century. It is a much different world today. Very few events unite the attention of people across the globe like a World Cup final. Everybody wants to be there.

But does everybody need to be at the World Cup? Is it not meant to bring together only the very best from across the planet? Infantino, to his credit, is not inaccurate in portraying the World Cup as a social event. However, in an attempt to make football more inclusive, he seems to have taken away the opportunity from smaller nations to host the tournament. They are unlikely to be able to afford facilities for 48 teams, if one were to consider the rising costs of hosting a major event that has already caused much consternation across the world.

Much before he became the FIFA president, Infantino was known to many as the man who administered the tournament draws at UEFA. During his time there, the European body had completely submitted its cash-rich tournaments at the altar of commercial interests. It was a culture in which Infantino had found his comfort zone. Now, as the FIFA president, he is leading the organisation into an expansion that is driven by the desire for the same pleasures he had ostensibly fought against. Infantino has picked out the wrong ball from the pot and there is no stopping him.