Even though a victory on penalties is unlikely to transform England into world-beaters overnight, the change in fortunes is a testament to the work accomplished by manager Gareth Southgate. 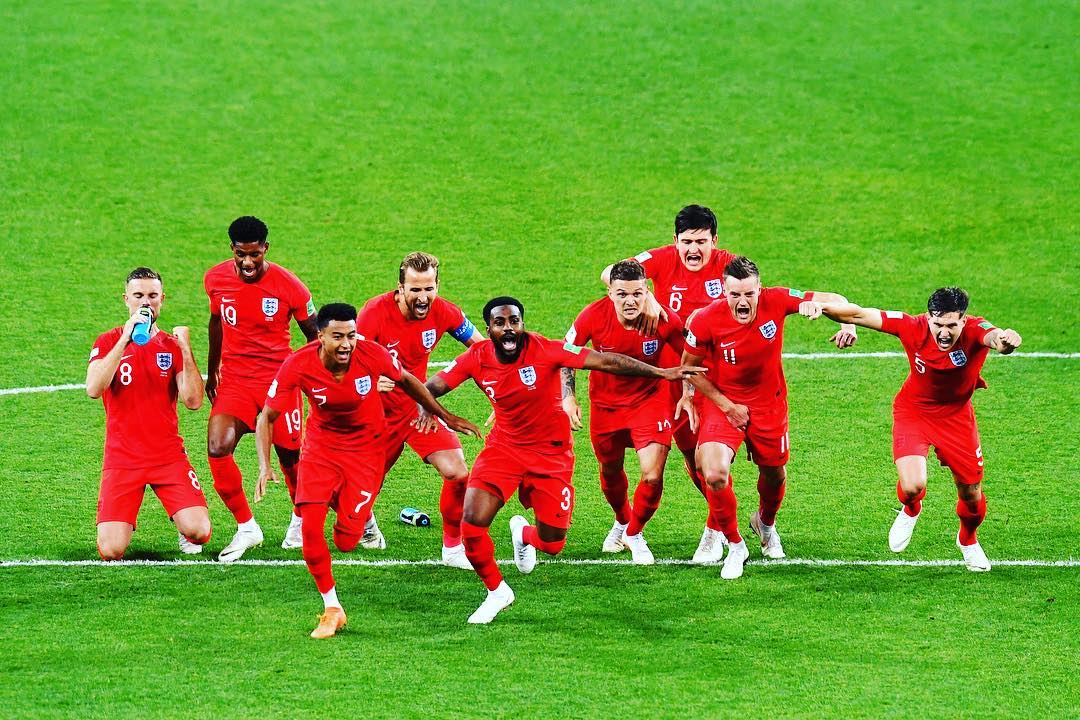 The England team erupts in joy after winning their round of 16 tie against Colombia, July 3, 2018. Source: Instagram

This article is part of a series from Russia that analyses the socio-political issues surrounding the World Cup. Over this month, with a combination of perspectives and reporting from the ground, overlooked and underplayed themes in football will be carried to the surface on The Wire.

Moscow: England won a penalty shootout. If conventional wisdom had not received enough blows in this World Cup already, it truly capsized after Tuesday night’s drama at the Spartak Stadium here. An England loss on penalties is a near-certainty in international football; until the win over Colombia, the Three Lions had never won on spot kicks in the World Cup and only once in the European Championships.

Even though the victory is unlikely to transform England into world-beaters overnight, the change in fortunes is a testament to the work accomplished by manager Gareth Southgate. The former defender – whose association with English failure at penalties remains strong thanks to his decisive miss at Euro 1996 – has sought to improve the team’s mental makeup by encouraging greater transparency from players in public and a less tense atmosphere within the camp. This is a paradigm shift from past England sides, where players felt restricted and excessively policed.

But more importantly, Southgate has sought to promote the diverse background of his team at a time when the politics over Brexit continues to divide. The Windrush scandal was another reminder of the hierarchy of citizens created by the British state even as it professes to treat everyone equally.

On Tuesday, the England side was a steady contrast as players from various backgrounds made an appearance. It was an ode to multiculturalism, a term often viewed with suspicion by British politicians on the right. Ashley Young, Raheem Sterling, Kyle Walker and Danny Rose have Jamaican ancestry; Dele Alli is of Nigerian origin; Marcus Rashford can trace his lineage to the Caribbean island of St Kitts and Jesse Lingard to St Vincent; and the scorer of the winning penalty, Eric Dier, was raised in Portugal.

Although the current English side’s diversity is not an overnight development, arguably never before has the men’s national football team stood so far away from the political consensus of the day. The people in power, and also those on the outside, seem keen to push ahead with Brexit even as, like Southgate has said in the past, England’s most popular sporting side is more representative of the country’s cosmopolitan youth who voted overwhelmingly against the severing of ties with Europe two summers ago. Southgate’s pointed remarks about the older generation – they are “pining for something that isn’t there anymore” – showed where he sees himself and his side in this political debate.

It is rare to see a football coach openly discuss his politics. For a person of Southgate’s stature, it is an even more challenging task since the stakes are so much higher for the manager of England. The media scrutiny does not relent. Yet Southgate has shown himself to be courageous under the spotlight.

When Foreign Secretary Boris Johnson, in typically obtuse fashion, compared the World Cup in Vladimir Putin’s Russia to Adolf Hitler’s hosting the Berlin Olympics in 1936, the England manager was scathing in his response. “It’s of little interest to me what the foreign secretary thinks about it. I spoke to the players a couple of days ago and there’s no suggestion we won’t go to the tournament,” said Southgate in March this year, when calls for boycotting the World Cup were made following Russia’s alleged involvement in the poisoning of spy Sergei Skripal in Salisbury.

Significantly, Southgate has also asked for better perspective over fears of racism in Russia, which were routinely raised by the British press before the tournament. Although the issue is not without merit since the World Cup host has attracted plenty of censure and punishment over the years for the racism in its football grounds, the subtle variant flourishes within English football too. This was brought to light last year when footballer Eniola Aluko’s complaint over racist remarks made by the former England women’s team head coach Mark Sampson was brushed under the carpet by the Football Association.

Southgate’s words offered a much-needed corrective on the same day he put Johnson in his place. “I don’t think we should just talk about racism in Russia. We’ve got to get our own house in order. There are things going on in our own country that aren’t correct. We keep pointing the finger at Russia, where we are going to be guests in the next couple of months, but we haven’t resolved the issue in our own country.”

His position is at odds with the dominant political arguments in public discourse but he is not averse to challenging the status quo. Instead, it was Prime Minister Theresa May who looked out of touch when she inadvertently posed with the Belgium flag a day before England played its final group game against the Red Devils.

Even if the English players fail to outsmart Sweden on Saturday, Southgate has already taken them in a direction that should have been done many years ago. For a long time, English footballers were averse to play for foreign clubs as they believed it would reduce their chances of becoming a part of the national setup. Many others were also convinced that there was no better competition than the Premier League. Even though such opinions still have currency, Southgate is keen to move beyond what he calls “island mentality.” Stints abroad can produce more rounded footballers. The English Premier League itself demonstrates that, as foreign influence enriches the competition. The country’s top division derives much of its popularity from the overseas players and managers who feature in it.

If England goes deeper in the World Cup, the national side has the possibility of becoming a standard-bearer of multiculturalism too – a representative symbol like the ‘Black, Blanc, Beur’ French team that won the tournament at home in 1998. However, Southgate’s players have already engineered a change in perception. After getting a glimpse from distance of the wonderful time English fans are having in Russia, many more are expected to make the trip for the final days of the World Cup. The fears spread by Western media in the lead up to the tournament have washed away, although they did contribute to an unprecedented decrease in the number of English fans travelling for the World Cup.

But Southgate’s diverse and vibrant squad has reenergised optimism by reaching the quarterfinals for the first time in 12 years. The youngest team left in the tournament will also draw confidence from the fact that England won the under-17 and under-20 World Cups last year.

But even as history-making is in sight, Ferdinand Mount’s words remind us that the current team is not yet fulfilling past destinies. Mount perspicaciously wrote that English public life is possessed by the tenor “of regret, of nostalgia rather than self-congratulation.” The year 1966 is a worthy memory not just because England won the World Cup but also because it revives images of a time when the national football team was all white and terms like multiculturalism were limited to dictionaries.

Now the English side with more than half of its players tracing their origins abroad asks different questions of its citizens. For Southgate, his team can be a force for change. Not everybody believes so but even if England emulates the side of 1990 with another semifinal spot, it will become impossible to ignore what the team represents.

In popular imagination, which views Britain as the rightful home for all sports since most of them were modernised in the imperial United Kingdom, any suggestion of English victory means that football is coming home. But if that does come true on July 15 in Moscow, the glory will also bring lessons home that already cause much hand-wringing in England’s political and social life. Southgate’s players could be at the forefront of that conversation. If so, penalty shootouts might just appear to be a simpler challenge for England’s footballers.