The Final Barrier: The Global Quest to Run the Marathon Under Two Hours

Eliud Kipchoge's experimental marathon run at Manza has opened up a whole new set of possibilities on what the human body can achieve. 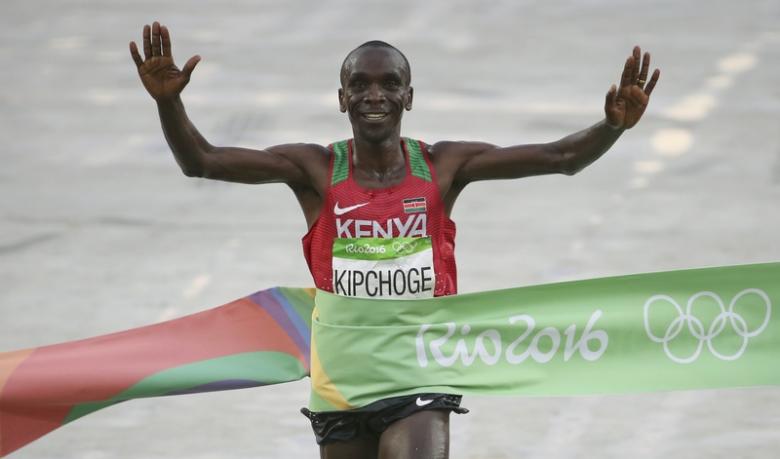 When Kenya’s Eliud Kipchoge finished the experimental marathon run at Manza racing track in Italy on Saturday in 2 hours and 25 seconds (the world record is at 2 hours, 2 minutes and 57 seconds held by Denis Kimetto), it was a monumental feat that perhaps only three others in the world can match under the same conditions.

Kipchoge, who had won the Delhi marathon in December last year, was the lead runner in a team effort sponsored by Nike to see if a human being could run the marathon in under two hours. After Roger Bannister ran the mile in under four minutes, there has not been such a global endeavour to conquer a time barrier that seemed insurmountable only a decade ago. The Manza race will not be counted as a world record since it was run under controlled conditions, drinks were delivered to the runners and pace setters joined the race at different points, but it has opened up huge possibilities. It is the physical equivalent of sending a man to Mars.

For Nike, it was, well, a marathon effort, which would also test its new Zoom Vaporfly Elite shoe that has a graphite plate that saves runners the hassle of bending or flexing their toes. But it is not the technology part of this race that should capture our imagination. What is important here is the global interest in breaking the time barrier and the various efforts going on worldwide to achieve it. Kipchoge said at the end of the run, “It has been hard. It has taken seven good months of preparation and dedication, but I am happy to have done that time. It is history.”

Indeed it is. More than 100 years ago, at the 1896 Athens Olympics, Spirido Louis of Greece won the marathon in 2.58:50, almost an hour behind the present world record. Since 1998, the marathon timing has dropped by an incredible 3 minutes 8 seconds, which is what has sent many scientists and coaches in search of the sub two-hour marathon. In 100 years, mankind has eclipsed close to one hour from the marathon timing, a superhuman effort that even science hasn’t come to grips with. In a marathon, even a minute is eternity. Many experts had predicted that it will take up to 2035 or 2041 to break the two-hour barrier. The Manza run has changed all that.

The Manza run is history and a Bannister moment, because it stretched the limits of human body like never before. It meant that each mile had to be run in 4 minutes and 34 seconds all through the distance, an effort that could burst the lungs of any human being on Earth except three or four runners today. Science itself cannot figure out how the body can do with so little oxygen during the last stage of the marathon or how the lungs can provide it in such a pace. This would have been quicker than Kimetto’s world record run in Berlin by seven seconds every minute. This also meant that Kipchoge did the split under one hour, which is phenomenal, although he had a tough time (naturally!) in the last quarter.

In this race, Kipchoge would have used 85-90% of a runner’s aerobic capacity, twice the capacity of an average man and a sustained heart rate of about 160-170 beats per minute (resting rate 60-100 beats,) possible only in human beings who have hearts that can pump like a machine.

What goes into a marathon race and why is it that only runners from Kenya’s Rift Valley and a few others from Ethiopia can run at this pace? All of them belong to a sub-tribe of the Kalenjin and they dominate distance running today. “This is the same valley from which millennia ago a group of men and women began their walk to all corners  of the globe,” said Ed Caesar, author of Two Hours: The Quest to Run the Impossible Marathon. No one knows why this is, but there are theories ranging from the altitude of the place (9000 ft) to genetic factors – but science has yet to crack it.

In the Manza F1 track it was Nike that did the background research and put in the work  required for this effort. Kipchoge himself spent seven months preparing for this, skipping at least two major marathons. Will Kipchoge be able to lower his own recognised timing by four minutes to break the barrier in forthcoming events? Not possible. This is because slashing valuable time off a marathon run can be made possible only in ideal running conditions – the weather has to be about 10ºC, the altitude of the place must be as low as possible to make more oxygen available, turns and twists in the course have to minimum, and so on. The World championship is in August in London, where Usain Bolt will run his last race. All attention will be on the seconds that Bolt will clip of the 100 m. But away from the limelight, Kipchoge and others will be running an impossible race against time.

In the effort to make two-hour marathon possible in regular conditions, a Greek scientist has been working in a lab at Brighton University as part of what is called the Sub2project. Yannis Pitsiladis, called a “scientist and provocateur” by the New York Times, is one of those who thinks that eternity is within his grasp. The two-hour maniacal dream drives him. “What excites me is understanding the limits of human performance. What can man do?” Pitsiladis asks.

Pitsiladis wants to use nanotechnology with runners wearing outfits that would transmit all information about the body which can be used to pace out a race, apart from of course the conditions of the venue. For him, the altitude of the place is important. He believes that the oxygen-enriched Dead Sea, “the lowest place on Earth” at a quarter mile below sea level, where the barometric pressure is high and there is 5% more oxygen to breathe, would be an ideal location. From him the Sub2 project will reach fruition in 2019, a target deemed quite impossible but now, suddenly, after the lung-bursting run in Manza by Kipchoge, quite possible.