Dog Days at the Test Match

The shoe-throwing incident encapsulates not only the professional slovenliness that often prevails in India, but also the callousness – the moral deficit. 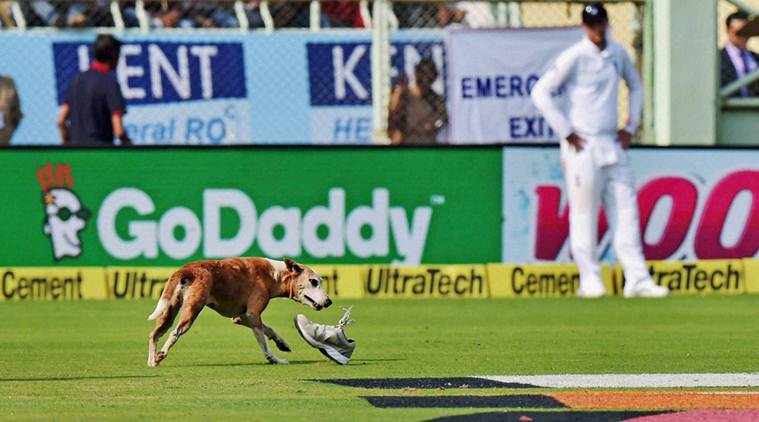 A stray dog disrupts play during the 1st day of 2nd Test Cricket match against England in Visakhapatnam on Thursday. Credit: PTI/Ashok Bhaumik A stray dog disrupts play during the 1st day of 2nd Test Cricket match against England in Visakhapatnam on Thursday. Credit: PTI/Ashok Bhaumik

Just before tea on the first day of the India vs England Test match in Visakhapatnam, a typically audacious specimen of the Indian stray dog – canus lupus familiaris – sauntered onto the field and brought play to a halt.

Its presence induced merriment in the crowd, bemusement in the England fielders and panic in Cheteshwar Pujara, the Indian batsman on strike on 97 runs. The last thing that a man wants when he’s a hit away from a century is a loss of focus.

We can only wonder what the dog was thinking. Ian Botham, in the commentary box, was surprisingly tender for a man of his indelicate reputation. “The poor thing will be petrified,” he said. “Somehow it’s come by mistake into the stadium and suddenly it’s thinking ‘how do I get out of here?’” This was a very English kindness to animals, a thing of almost mushy beauty – in contrast to the consummately Indian display that followed.

I won’t ask how the dog got into the stadium. There are few creatures more resourceful than the Indian pie dog. Having found a way past the local constabulary and onto the lush green outfield, it wandered without clear purpose – most likely disconcerted by the noise from the stands that greeted its arrival – before it was set upon by two groundsmen. They ran at it, but it feinted deftly out of reach and scampered away. It hid for a few seconds behind the advertising boards and then ran back onto the field for a second time. The exasperated umpires took the players off for an early tea, with poor Pujara stuck on 97 not out. Dog Stops Play.

One of the groundsmen, defeated in his attempts to catch the ungovernable dog, took off his right shoe and hurled it at the creature. It was an act of frustration, no doubt, but also one of notable professional ineptitude, not unlike the countless instances of maladroit crudeness that consumers and citizens encounter daily in India. “Who throws a shoe?!” tweeted Michael Vaughn, a former England captain, asking a question that occurred to more than just a few of us. Indeed, how do you catch a dog by launching your footwear at it?

Imagine a dog wandering on to the field at Lord’s or Old Trafford. A stretch, I know, but think of it as a thought-experiment. Would a steward fling a boot at the animal? Not in a hundred years, and not merely because that would be an uncivilised thing to do. Think of an English crowd’s reaction. The steward would be lucky to leave the premises unscathed (proving, some might say, that the English are nicer to dogs than they are to people).

The shoe-throwing incident encapsulates not only the professional slovenliness that so often prevails in India, but also the callousness – the moral deficit. A man doing his job in full public view – in fact, televised internationally – thought nothing of resorting to an act that could have hurt the dog. Shoe-throwing is also an Indian expression of great contempt, and there are few other countries in which the contempt of the strong for the weak is as casually delivered as it is in India.

The trespassing dog of Vizag symbolises survival outside the rules of civic order. In India, that “order” is all too often a disorder, where rules are enforced boorishly, by the Law of the Shoe. But victory, in the end, was the dog’s. He brought a Test match to a halt – and became, forever, a part of cricket’s history.