What Do They Know of Diego Who Only Diego Know?

To the millions of lives he affected in his career though, Maradona meant significantly more than a professional athlete. 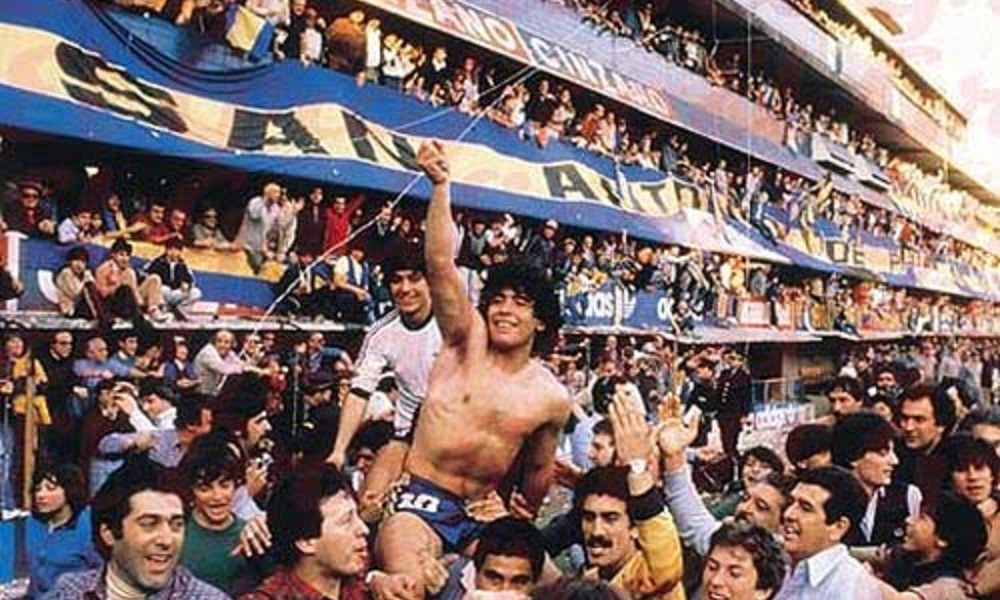 The advent of big data and analytics in sports has forced a critical change in the way players and games are talked about. Hard numbers and key data points are more available and accessible than ever before. It could be argued it has completely transformed the viewing experience too. Fans today are much more invested stakeholders into the nitty-gritty of a contest as opposed to the times when their opinions were mainly shaped by narratives rooted in rhetoric and cultural biases.

Many – and with good reason – feel this has led to a very pristine and pure romance of sport being sapped out of popular consciousness. After all, sport was meant to be about the unadulterated joy one derived out of witnessing skills and artistry that few were blessed with. It was about celebrating the larger-than-life superstars, their stories of struggle, their rise and fall, and those moments of genius they produced leaving everyone dumbfounded. Instead, the sport experience has assumed a completely academic form in a discourse dominated by data. Ruthless consistency and rigorous professionalism are valued much more than the eccentric but occasional piece of magic. Mechanical over mercurial.

The romantics, to no one’s surprise, do not quite find their feet in a world like this. But then, they tend to struggle accepting most realities of a neoliberal world order moulded by late capitalism and sport is no different. Pragmatism and reason triumph over romance. However, the one last vestige of nostalgia that the romantics could hold on to, which even the most vociferous advocates of pragmatism had few counters against, was Diego Armando Maradona. And though outside the generation that would qualify as old today, few are likely to have any first-hand tales to tell of Maradona, his sudden passing has left a gaping hole in the collective memory of the entire football fraternity transcending all possible constraints.

For the generation often condescendingly dubbed as millennials, Maradona was mostly a YouTube phenomenon. Hundreds and thousands of highlights and compilations formed their perception of a preternatural talent they wished they were old enough to have witnessed. But then, retrospective appreciation had its own charm. Being able to flaunt knowledge of ‘that goal’ against England in 1986 elevated one’s status from that of just another casual fan. Laying out his exploits at a provincial club like Napoli and questioning whether Lionel Messi could emulate the feat outside a hegemonic power like Barcelona would in an online forum convince everyone of one’s grip over history. In fact, up to a point where Messi’s stats were only slightly less ridiculous than they are today and the jury was still out on his status as the greatest ever, Maradona was the internet’s favourite prop to forge a counter-narrative.

References to the infamous ‘hand of God’, an ugly scuffle with rival players played out on camera, charges of substance abuse, extremely opulent lifestyle, speculations of links to the Italian crime mafia syndicates, missing out on a World Cup after failing a drug test – all of it added to the outlandish cult of Maradona. Those too young to have watched him revelled in an enigma seldom experienced in modern football. His irreverence for professional conduct made for a captivating story of rebellion unlikely to come out of a world far more politically stable now. Footballers today are instead are much more committed to the job they are paid for and aren’t particularly concerned about becoming cultural icons for the working class. Even in their occasional activism, they are far too careful and correct.

Also Read: Diego Maradona: The God of Football Who Fought for Social Justice

But Maradona was none of it. He was not the most attuned with the ways of the modern world and he wasn’t going to apologise for it. In his head, he had earned the cockiness and extravagance he flaunted and cared little about being judged for it. His mannerisms under today’s vigilant standards of public decency would certainly fall under toxic masculinity but at the peak of his stardom, there were no deterrents for his conceit. And with the magic he could create with the ball at his feet, most were more than willing to forgive.

Interestingly, however, Maradona never shied away from making public his loud endorsements for popular communist governments across Latin America. Despite his politics being far from refined – his pompous excesses stood in complete contradiction of the ideology he endorsed – both Hugo Chavez and Fidel Castro saw value in validation from Maradona. His humble origins helped sell an aspirational rags-to-riches story and cultivate a persona of people’s man. Incidentally, the two football-crazy mainland Indian states of Kerala and West Bengal where Maradona found the greatest adulation happen to have historically been of a communist bent.

Indeed, only minutes after the news of his passing broke out, the Communist Party of India (Marxist) general secretary Sitaram Yechury and his party colleague and Kerala chief minister Pinarayi Vijayan were among the first Indians to express their shock and condolences. Even among the Indian media, the coverage has been far more extensive in publications based out of the two states compared to elsewhere. Maradona’s fervent following in the city of Kolkata was evident in how he was received on his last visit in 2017. The fanfare Kolkata had reserved for football’s prodigal son could only have been rivalled by the city’s biggest homegrown sporting icon and former Indian cricket captain Sourav Ganguly. 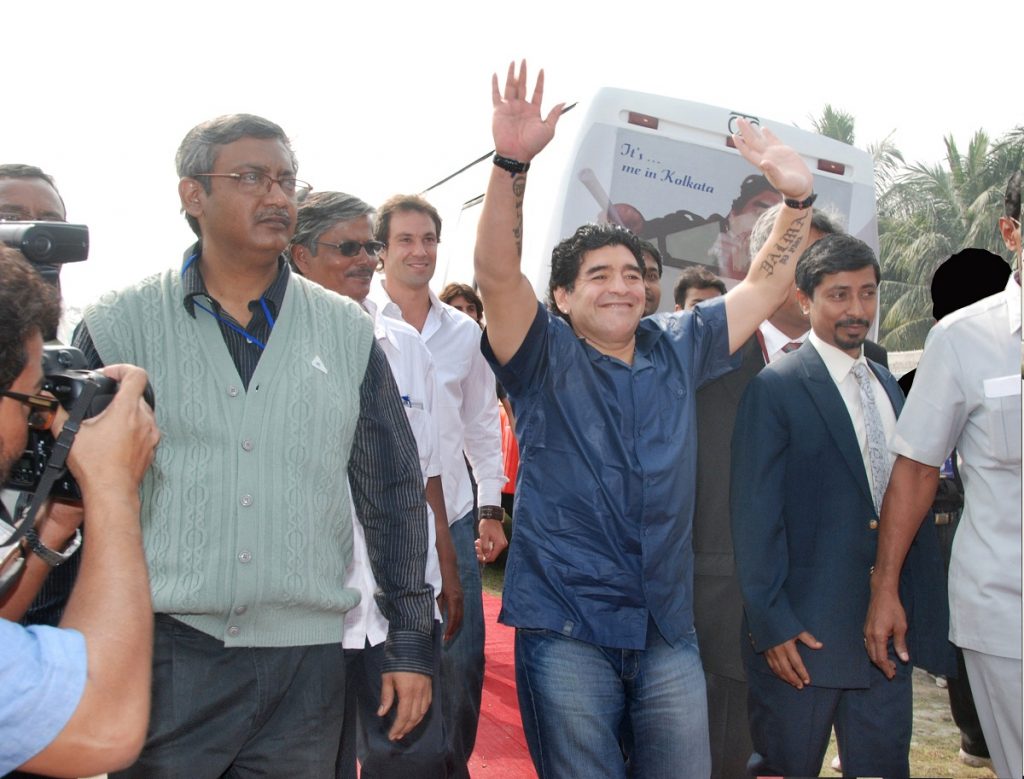 A large number of Indians could claim to have been introduced to the sport by Maradona. Even today, he continues to remain the sport’s biggest household name in this part of the world. Until as late as World Cup 2018, ad campaigns were designed showcasing how Maradona was synonymous to the sport itself to Indians. During the World Cup in one of Argentina’s games, the sight of him celebrating a decisive Messi goal from the stands made for as much of a television spectacle as the goal itself. Generations had come and gone but Maradona’s popularity hadn’t dipped one bit. No one could blame Messi for being slightly envious in that moment.

But Messi has more reasons to be envious of Maradona. The way popular media and the extended fan communities tend to remember players of past and juxtapose them against the present ones is usually far more unfair on the latter. Larger and larger numbers of people now have direct access to track Messi’s output every week. Advanced analytics and computer graphics provide insights into a player’s performance that was hard to envisage only a few years back.

Maradona was never subjected to this level of intense scrutiny. His legacy is largely defined by the most celebrated moments in his career that remain etched in popular memory. This is one luxury a modern player has to make peace with never having been afforded. Therefore even though Messi may overwhelmingly trump Maradona on every single statistical metric, the arguments presented for comparison will forever be heavily loaded with intangibles and nostalgia.

But while this kind of narrative building exercise often presents an inflated appraisal of a player’s actual legacy, one could not possibly complain about Maradona being given somewhat of a free pass. Because no adjective feels out of place while describing the countless resplendent moments he has produced. The sheer aesthetics of him dribbling past a string of opposition players attempting to mark him should indeed make even the most cynical data nerds want to take a moment off and indulge in the romance.

And for what it’s worth, despite all the travails of modern football – superior infrastructure and facilities, better coaching, greater awareness towards fitness and diet – it is still unimaginable to think of a Messi taking the hard path of playing for an underdog of a club and beat the traditional behemoths to a league title. In fact, bankrolling clubs through petrodollars has only meant further and further concentration of the best talent to the chosen few clubs while the rest make up the numbers. It is anyone’s guess what kind of numbers Maradona would have produced playing in this era of superclubs. 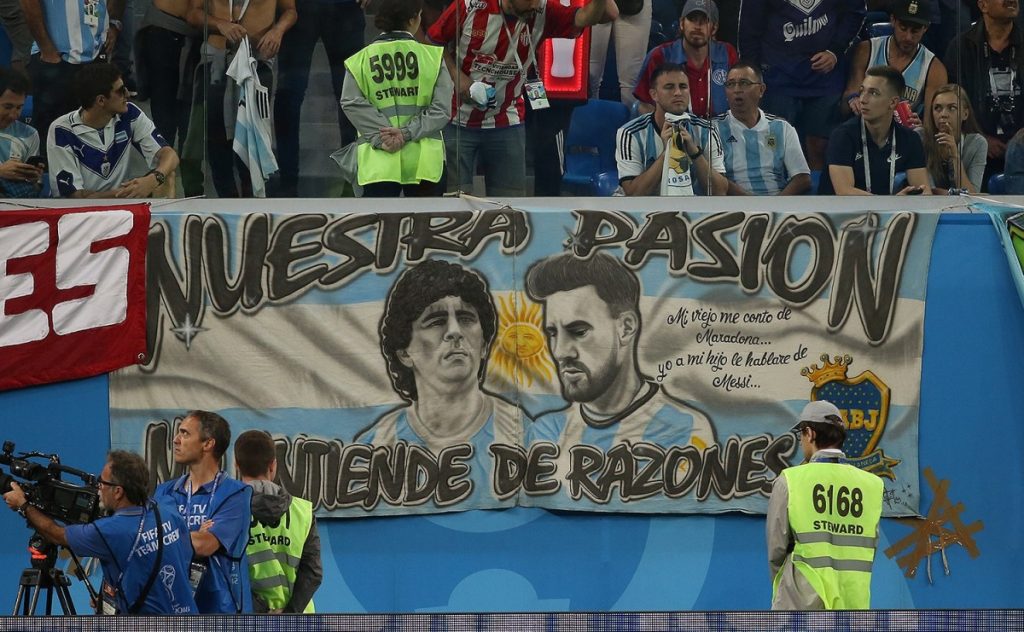 Or maybe his eccentricities would have given way under the rigours of modern football and he would have remained a shadow of himself after leaving the world enthralled for a while. The modern game has had an example of a similar ephemeral genius in Ronaldinho who by all means was the most natural successor to Maradona’s legacy. But in either case, it is very unlikely for Maradona to have not carved out a legacy the world would remain fixated over.

To the millions of lives he affected in his career though, Maradona meant significantly more than a professional athlete. His on-field artistry coupled with the towering persona was often too intimidating to make complete sense of. His aura was so consuming and mysterious at once it is impossible to tell whether even those claiming to have followed him the most ardently knew him at all.

When the object of one’s affection outsizes their very sense of being, it results in a phenomenon beyond the realm of comprehension. This is exactly what Maradona became to those who shall even after his death continue to swear by him. For in him, they learned to hope and dream. For in him, they saw football itself. For there was nothing more they needed to know.

And if one may further tweak an already twisted quote of Rudyard Kipling by the legendary C.L.R. James, what do they indeed know of Diego who only Diego know?