Coming off their heartbreaking loss to Australia in a controversial semifinal, India showed the intent to wrap up their campaign with a win and earn a podium finish. 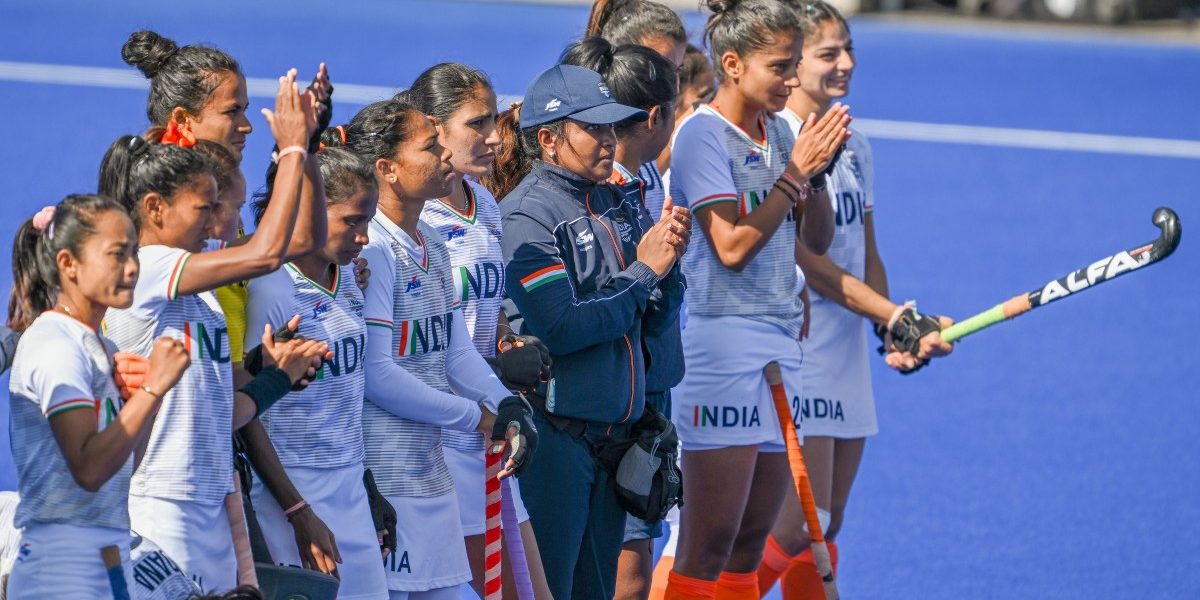 The Indian women's hockey team clebrates their win against New Zealand to earn bronze in the Commonwealth Games in Birmingham. Photo: PTI.

Birmingham: Skipper Savita Punia led from the front with a spectacular display as the Indian women’s hockey team overcame the stopwatch controversy to beat New Zealand 2-1 in a shootout and win the bronze medal at the Commonwealth Games here Sunday, August 7.

This is the team’s first medal at CWG in 16 years.

Leading 1-0, India conceded a penalty corner with less than 30 seconds to go for the final hooter, as the match went into shootout after Olivia Merry’s equaliser.

In regulation time, India got the lead through Salima Tete in the 29th minute.

Coming off their heartbreaking loss to Australia in a controversial semifinal, India showed the intent to wrap up their campaign with a win and earn a podium finish.

The Indians were done in by a horrendous timing faux pas in the shoot-out against Australia.

In the shootout on Sunday, India captain and goalkeeper Savita showed class, pulling off three spectacular saves to give her side its third CWG medal.

After Megan Hull put New Zealand ahead, an agile Savita denied Rose Tynan, Katie Doar and Olivia Shanon, while Sonika and Navneet scored for India to register a famous win.

“We knew it wouldn’t be easy, so before we came, we worked every minute and every second. I am so proud. We fought as a team,” Savita said.

On the pressure of being a goalkeeper in the shootout, she said, “The pressure is always there, but all credit goes to my coach (Janneke Schopman) who told me ‘you are good, so just believe in yourself and watch the ball’.”

The Indians came out attacking and made plenty of circle penetrations but failed to break the solid New Zealand defence.

India gained the tempo as the match progressed and built their attacks using both the flanks.

But it was New Zealand who came close to taking the lead in the first quarter, in the form of a penalty corner which was well defended by the Indians.

Minutes later Sangita Kumari’s shot on target was blocked by the Kiwi defence.

Seconds later Salima’s shot zoomed across the right side of New Zealand goal.

The Indians continued in the same vein in the second quarter and had the better share of ball possession, but they failed to break the resolute New Zealand defence.

In the 26th minute, New Zealand came tantalisingly close to taking the lead from a counter attack.

India finally broke the New Zealand defence a minute from half time through Salima, who scored off a rebound with a reverse hit after Navneet Kaur’s initial shot was saved by the opposition goalie.

India kept up the pressure after the change of ends, and in the 35th minute, secured their first variation, but the chance was wasted.

Minutes later, excellent work by Navneet and Neha Goyal set it up for Sonika, who just had to get her stick on the ball, but failed.

Merry seemed to have equalised for New Zealand in the 43rd minute against the run of play, but the goal was disallowed after India went for the referral, claiming that the free hit wasn’t taken from the 5m line.

The Indians lived dangerously in the final quarter.

India got three penalty corners in succession in the 52nd minute but Gurjit Kaur failed to get past New Zealand custodian Grace O’Hanlon.

The Indians lived dangerously in the fag end of the match and with two-and-half minutes remaining, Lalremisiami got an unnecessary yellow card, reducing her side to 10 players.

The Kiwis took advantage of that and secured a penalty corner with seconds from the hooter, which resulted in a penalty stroke, as Navneet deliberately kicked the goal-bound ball.

Merry stepped up and foxed Savita to draw level and take the match into shoot-out.