Part of Holding’s appeal was his refusal to toe the line in service of the establishment. 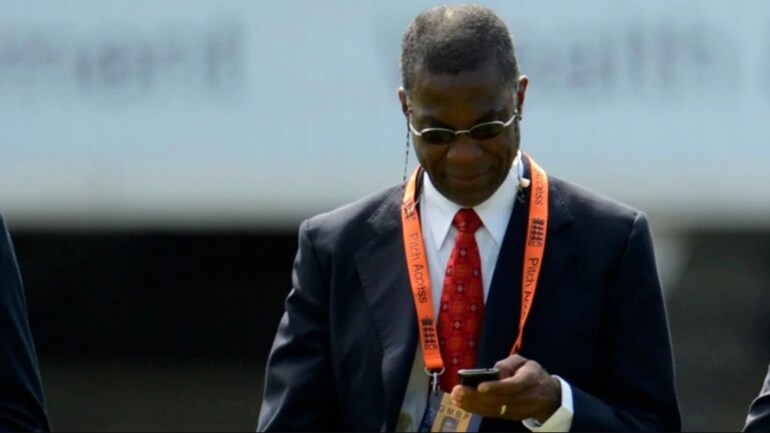 On a quintessentially breezy, cold morning of the English summer, cricket is as soothing as it is intense. The roar of the crowd is relatively gentle, the clapping elegant, and the mood atmospheric. The shiny new red cherry seams and swings more decidedly here than perhaps anywhere else in the world. Batting isn’t easy and the struggle to survive is real. The slip cordon is full with fielders lurking in anticipation of an edge flying their way every other ball.

When the setting is so unforgiving and loaded in favour of bowling, a batsman making good contact to an overpitched outswinger and playing an affirmative drive feels like an event. It’s a much needed breather even for the viewers tired of one play-and-miss too many. At the first hint of the ball clearing the in-field, the rhythmic applause follows.

But for those tuned into their televisions sets, the viewing experience is incomplete without a voice-over describing to them the shot in the most evocative words possible. A perfectly executed cover drive does call for some verbal liberty. Phrases bordering on verbosity are commonly thrown describing lesser events on cricket commentary.

But in this instance, the person holding the microphone only has a word to offer in his description of the shot – ‘Runs’, emotes Michael Holding with the deepest baritone notes in that unmistakable Jamaican accent. And a moment of silence is followed by the most matter-of-factly ‘four of them’. For a moment, you feel as if this person is condescendingly looking down upon your reactionary excitement and is asking you to keep your enthusiasm in check, without really saying it in so many words.

Holding’s economy with words was more than made up for by this distinct texture of his voice that was carefully tailored for microphones. There was this peculiar familiarity and a deep sense of comfort that his presence in the commentary box brought. You didn’t even have to be glued to the cricket that was going on. You could be least concerned with who was ahead in the game and how James Anderson executed that perfect ball, trapping the batsman in front of stumps. But that piece of cricket felt special because Holding told you it was special. It was indeed that simple.

For over three decades, Holding has been a constant feature on cricket broadcasting in one part of the world or another. For most it’d be veering in the territory of overstaying your welcome. That level of familiarity inevitably breeds contempt. But quite astonishingly, growing familiar with Holding’s commentary almost bred a reassuring sense of comfort. And he achieved this without ever really reinventing himself to any considerable degree. His static notes, his pauses, his uniquely composed demeanour and his generally unexcitable persona remained his brand for as long as he called a game.

Where Holding remarkably stood out, though, was he never allowed his status as a bona fide legend from his playing days to influence or overshadow his role in the media. Commentary is a safe post-retirement profession for most players who treat it rather casually and seldom go beyond rehashing self-indulgent anecdotes and a tired rhetoric.

Their popularity earned from the playing days means their presence on the panel carries a certain weight and the broadcasters act happily acquiescent. However, when an objective appraisal would reveal that those having turned commentators after a modest playing career take the job far more seriously and show a tendency to learn and grow since they are conscious of their expendability.

Also read: A Lesson for India’s Superstar Cricketers: Commentators Are Not Cheerleaders

Holding was one of the rare exceptions in this regard. His status as one the greats of the game is undisputed. To an entire generation, he personified the very idea of a fast bowler who could run in hard and torment and terrorise. In a 2017 interview, former Indian quicks Zaheer Khan and Ajit Agarkar cannot stop gushing about Holding’s run-up and approach to the crease. Some of the reputation that he built as an intimidating fast bowler has percolated into his image as a no-holds-barred commentator too.

At the same time, Holding has also found retrospective fandom for his bowling from a generation who had only known him through his commentary. With his continued presence on television through the cricketing seasons, Holding only grew in relevance and didn’t fall out of sight of the younger fans the way his illustrious colleagues who formed the famed pace quartet did. Holding’s charm successfully transcended the times, despite his very active reservations against the blatant commercialisation of sport.

Part of Holding’s appeal was his refusal to toe the line in service of the establishment. He exercised little restraint in calling out what he felt wasn’t in the best interest of the game. The ever-growing popularity of franchise-based T20 leagues and particularly of the Indian Premier League (IPL) didn’t sit too well with him. While some of Holding’s criticism may feel archaic and stemming from a place of resisting the changing times, to his credit, he never let popular consensus influence his own strongly held positions.

Perhaps it is this very sense of conviction that allowed him to speak so freely and so provokingly on the deeply sensitive subject of racism in sport. At the beginning of the English summer in 2020, the host broadcasters Sky Sports addressed the problem in great detail and Holding along with former England cricketer Ebony Rainford-Brent articulated his experiences of racial discrimination with enviable eloquence.

Holding poured his heart out stressing the need to tackle the problem head-on rather than resorting to mincing of words and skirt the issue. “Don’t shout back at us that all lives matter. It is obvious; the evidence is clearly there that white lives matter. We want the black lives to matter now. Simple as that,” said a visibly emotional Holding evoking a deep sense of poignancy.

It is the stature that he had earned over the years as this grand old man of cricket that allowed the message to amplify in its appeal and land with great candour. It was impossible to debate over the nuance or semantics of what was said simply because it was Holding saying it. It’s quite remarkable that even on a topic as important and far-reaching, the ‘who’ mattered just as much as the ‘what’ of it, if not more. In that moment alone, Holding outshone all his extra-ordinary feats achieved on a cricket field and so many more off it.

Three decades is a long time. Holding’s got to be exhausted of all he’s had to give. In this time, he has collaborated with every major network in every part of the world where cricket has reached. Though the final few years have been limited to England’s Sky Sports and South Africa’s Supersport, his popularity has remained intact across geographies. Holding has represented that fast fading final vestige of traditionalism that many are finding impossible to hold on to, but aren’t willing to give up on just yet.

The biggest shame in India’s withdrawal from the final Test of their England tour earlier this month was it meant Holding got denied a farewell befitting the journey he’s had. It would’ve been the most seminal moment in the UK’s cricket broadcasting history since Richie Benaud called it a day after 42 years with BBC and Channel 4. At the end of the 2005 summer, the packed stands at The Oval rose and applauded for the Australian to no end. The Old Trafford crowd would’ve reserved nothing less for Holding had the Test gone on and it would’ve made for a perfect end to a journey that deserved nothing less.

Holding is quite certain he won’t be around a commentary box again. It will take much more to move on from him than it seemingly did from the retirements of David Gower and Ian Botham from the Sky panel a couple of seasons ago. The English summer shall take some time to feel just the same.

Holding’s presence will be missed for a number of reasons, but none bigger than the fact that as long as he was around, he remained one of the few honourable exceptions in a profession that’s becoming increasingly harder to tell apart from professional PR companies serving interests of national boards and players. Given that, Holding probably timed his exit just about right.