Sporting disciplines that do not feature within the mainstream are deemed unworthy of our attention unless they bring glory – a selfish idea with little to say for the development of Indian sport. 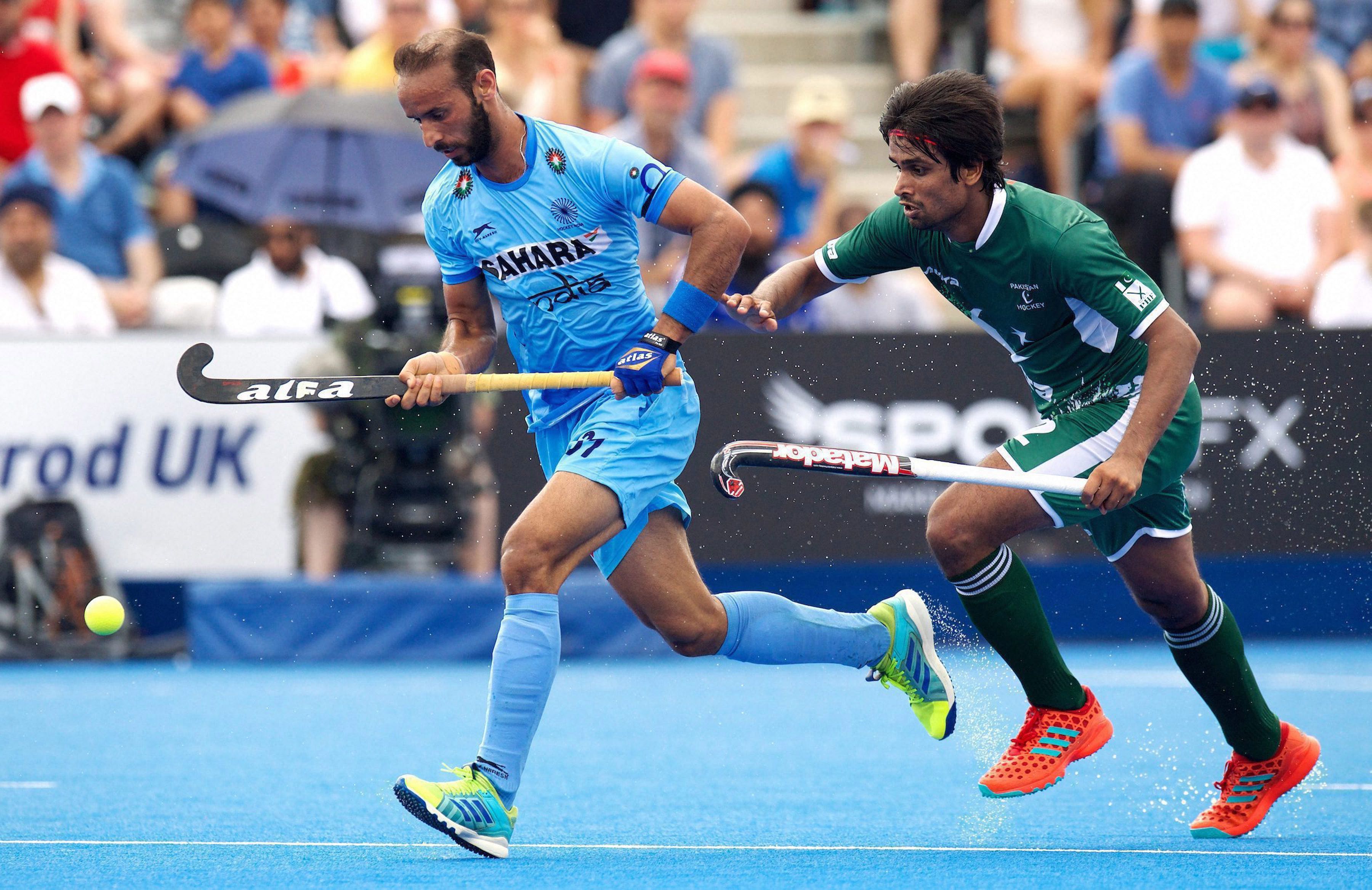 On June 18, the Major Dhyan Chand National Stadium was decked up for a public screening of the India-Pakistan match in New Delhi. Massive LED screens, inaugurated by sports minister Vijay Goel, had been installed at the hockey venue. As sportskeeda reported, the sports ministry went out on a limb to make it a grand occasion. The match – held in London – was expected to attract huge attention in the national capital. Finally, hockey was getting its due…

No, scrap the previous line. It was certainly an India-Pakistan match that was screened, but no hockey was on offer. As it has happened countless times before, cricket took the centerstage. It did not matter that India was playing Pakistan in hockey on the same evening. The inappropriateness of the endeavour was lost on the sports ministry. Voices of protest were shrugged off.

World Cup winner Ashok Kumar, and Dhyan Chand’s son, was among those who took a dim view of the screening. “I am feeling really sad about it. The stadium is named after my father and the ministry is showing cricket there. This is unacceptable. This shows how much they care about the game of hockey. For them, cricket is a priority when the BCCI doesn’t even care about their policies.”

As the evening wore on, the sports ministry might have had second thoughts about the screening. India crumbled to a comprehensive defeat against Pakistan in the Champions Trophy final while the hockey side recorded a thumping win. The Indian team’s victory, though, did not come as a surprise to those who follow hockey closely: such has been the fall in Pakistan’s stature over the past decade. It was very much in keeping with expectations.

In fact, it was the cricket team that failed to match the standards it usually sets. On the day, Pakistan outclassed India. Of course in the larger scheme of things this was not a catastrophic defeat. India remains an exceptional unit in limited-overs cricket but the odd poor display is not unusual.

“Pakistan can’t be good at everything”

However, you would not have guessed so if you had trusted the Indian news broadcasters’ judgment in the lead up to the final. While they had little time for previewing India’s prospects in hockey, long hours were dedicated to nourishing hype for the cricket. There was no other news item worthy of our attention.

So, to make us believe this was the biggest sporting clash in history, news anchors and reporters wore the Indian team’s jersey on a particular channel, leaving us in no doubt that they were no longer journalists. Female anchors, though, were spared the honour. Casual sexism?

The talking heads boasted about the ‘invincible’ Indian side that was going to thrash Pakistan beyond recognition. Some of them did so while hosting joint shows with Pakistani news channels, who kept their end of the bargain too. The banter offered on the broadcast was not worthy even of the lowest common denominator.

But the situation changed. As the match turned unfavourably for India, contingency plans were made. Perhaps those channels that had boycotted the match had it better. They could stick to their full-time job of fearsplaining. From other screens, as soon as the match finished, subdued faces greeted us. After a short analysis of what went wrong for India, interspersed with the scapegoating of certain cricketers, we were told that the hockey result mattered.

Suddenly, it was important that India defeated Pakistan in something else. Of course, there was still little talk of what happened on the field. There could not be for none of the talking heads were prepared for this eventuality. One suspects that there must have been a scramble towards the Wikipedia pages on Indian hockey players as the challenge at the Oval came undone. But the false sense of pride could not obscure why the victory in hockey was suddenly full of meaning.

Finding very little to say, anchors couched the result in terms of India maintaining a level field. Humiliation had been avoided. Not for one evening could it be accepted that Pakistan can be very good at cricket. Rather, the defeat had to be tied up with the goings-on in hockey to lend a feeling of satisfaction. Only insecure social groups would draw contentment from such a flimsy agenda.

It helped however that the Indian hockey team stood up for the only thing that seems worth caring about these days: the military. The players wore black armbands to condemn recent attacks on the country’s soldiers in Jammu and Kashmir. Sport and military, those two close friends, had come together again. Here was a team the nationalists could get behind. (But not the cricketers, mind you, whose commitment to the cause was questioned again.)

“As sportsmen, the Indian hockey teams have always shown solidarity and compassion towards the soldiers and have often dedicated their victories to the Indian Army. Today, the team strongly felt the need to condole the recent attacks carried out in Jammu & Kashmir where Indian soldiers lost their lives,” said Hockey India secretary general Mohammed Mushtaque Ahmad in a statement. Sports bodies generally do not welcome any political statement on the playing field, a delusion deserving its own separate conversation. So one can only wonder what the International Hockey Federation (FIH), which increasingly finds itself in thrall of Hockey India, made of the gesture.

In media circles, however, this was an opportunity to restart the nationalist bandwagon. Hockey was there to be appropriated again. For one evening, it was not just India’s national game in name. It could be used to embalm the wounds caused by hyper-nationalism. Hockey was reawakened from the catacombs where it is usually left to fend for itself. The shrill jingoism of the preceding days demanded an instant panacea. Thank god for hockey.

But cricket still matters, does it not? How do hyper-nationalists digest the fact that Pakistan is not an entirely worthless nation? Well, Sachin Tendulkar had a recipe for amnesia. As soon as Pakistan confirmed its victory, he was ready with a tweet to congratulate the Indian hockey team and badminton player K. Srikanth for his incredible victory in the Indonesia Open. The timing, for a player whose batting was defined by it, was terribly off. Not one word on cricket was uttered by Tendulkar, who only a few days ago was talking up his credentials as the ideal sportsperson in the vanity project that was his film.

But Tendulkar’s silence may not have been deafening for those who believe their heroes can do no wrong. Perhaps they have already moved on, having chosen to treat the Champions Trophy final as a bad dream. Well, here is a project they could get behind.

As he announced on Thursday night, Arnab Goswami’s objective for the match on Sunday was to look for people who would support Pakistan in the final. “Everyone should declare they are supporting India, including everyone in Kashmir,” he roared. His statement took one back to Bal Thackeray’s demand years ago that asked Muslims to prove their loyalty by crying whenever India lost to Pakistan. Thanks to Goswami, once again we have our very own Tebbit Test, named after the Conservative Party politician Norman Tebbit who had demanded unflinching allegiance from South Asian and Caribbean immigrants in the early 1990s when England played the countries of their origin.

Persecution is a convenient artifice for those who see sporting contests only as a test of national honour. The problem is that such politics can rebound on your face. Hockey and badminton may provide the occasional succour but they cannot ensure that defeats do not happen. Then again, the current political will for rewriting our history books may find a way out of that as well.

The response to the victory in hockey on Sunday was quintessentially establishment-like. Sporting disciplines that do not feature within the mainstream (that means every sport other than cricket in the Indian context) are deemed worthy of our attention only when they bring glory. It is an idea bound up in selfishness with very little to say for the development of Indian sport.

There are, as can be seen, lessons to be had from Sunday evening – but they are unlikely to be learnt. For there is nothing new about them and the past suggest they will be ignored. We will move on to our next screening of a cricket match because only therein can be claimed a sense of superiority. But it is a malleable reality; it does not produce success every time the fanatics want to feel better about themselves. The lack of reliability is unlikely to sit well with those who can see sport only as part of cultural nationalism infused with jingoistic fervour. In this nation-building exercise, hockey stadiums and other sports venues will continue to be meek spectators.