Arsène Wenger, Herald of the Winds of Change in English Football

It remains inconceivable that he will be entirely out of football, so deeply has he allowed the sport to define him. 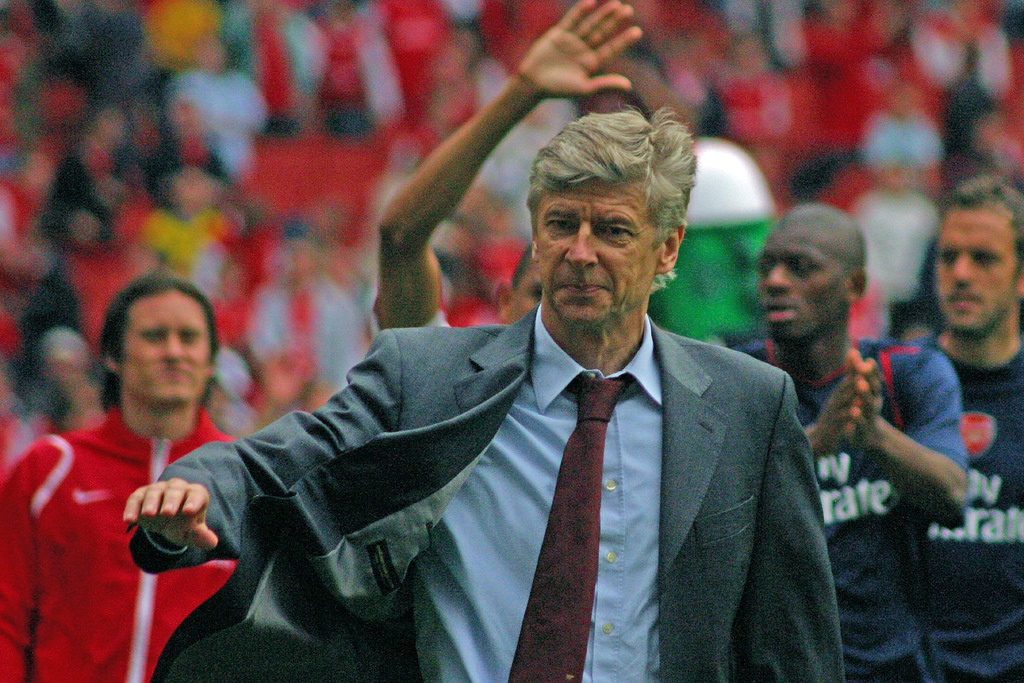 And he leaves. After years of holding his ground in spite of the disapproval, discontentment and rage – which consumed even those who did not link their fortunes with Arsenal – Arsène Wenger is leaving. As one suspected, now that he has announced his decision to vacate the position of manager at the North London club, a wave of sentimentality and nostalgia has shown up.

It is of course a better time than any to assess why a professorial French coach arrested football debates arguably like no other during his 22-year tenure at Arsenal. Wenger’s legacy can finally undergo a summary assessment. When he arrived at Arsenal in 1996, the reaction was mostly scepticism. Now that he departs, the scepticism is still there – albeit of a different kind, informed by his recent failures. The time traversed by Wenger, though, has much to say about not just him but also English football and society.

When Arsenal appointed the then 46-year-old, reinvigoration of the club’s culture was a primary objective. Former vice-chairman David Dein was taken in by Wenger’s sophistication. In his eyes, the manager had stood out as a candidate for years. After much persuasion, Dein finally convinced his fellow boardroom members to take the plunge in the summer of 1996.

But the doubts persisted within and without the club. Club captain Tony Adams viewed the manager derisively. “At first I thought, what does this Frenchman know about football? He wears glasses and looks more like a school teacher… Does he even speak English properly?” For the record, Wenger did speak the language. Lee Dixon was also among those yet to be won over: “A tall, slightly built man who gave absolutely no impression of being a football manager,” the Arsenal stalwart reckoned. The London Evening Standard summed up the confusion surrounding Wenger’s assignment with the headline, “Arsene Who?”

Wenger had arrived from the relative obscurity of Japanese league football but he was not the novice he was painted to be. Rather, the contention arose from the fact that he became the only non-British or Irish national in charge of a Premier League side. Wenger’s considerable success until that point did not matter because English football was defined by parochialism. According to the popular belief, England was the rightful home of football. No matter what Wenger had achieved, he still had to demonstrate his worth to the presumptuous British public.

The foreigner, of course, has been a much-derided figure in British society. In England, Your England (1941), George Orwell wrote of the suspicions aroused by the outsider while reinforcing how deep the apprehensions ran. “The insularity of the English, their refusal to take foreigners seriously, is a folly that has to be paid for very heavily from time to time. But it plays its part in the English mystique, and the intellectuals who have tried to break it down have generally done more harm than good.”

Wenger, an intellectual by any stretch of imagination, ran contrary to the assumption. His method transformed English football to the extent that today he is seen as a pioneer for the globalised form that the sport has assumed. In his mind, the question remains simplistic. “For the English, sport is combat. They can’t go to battle without a general. For the French, football is a form of collective expression,” he once said.

The Frenchman captured the dissonance within the debate. For the English players and observers, it was difficult to repose faith in a coach whom they did not respect. The traditional manager had been a figure who commanded and received utmost respect from his charges. Wenger, on the other hand, belonged to a different school of thought: he was dictatorial in own ways but his preference for the collective over the individual remained strong.

In his initial years, what worked for Arsenal’s manager was his ability to accommodate. Wenger stuck with the core of English defenders while gradually revitalising their careers. The players’ diet became the subject of his primary intervention. Dissent, however, was registered almost as soon as Wenger unleashed what was pejoratively called his “broccoli revolution”. No drinking alcohol, no chips, no leaving granules of sugar unabsorbed. In came codified menus, vitamin supplements and constant vigilance.

Players recount anecdotes of Wenger forming an understanding with the hotel staff to report those who strayed from the prescribed diet. The tension ran high in the initial weeks, especially when Mars bars were banned for playing members. When Arsenal travelled for a match in Blackburn, the team bus reverberated with shouts of “We want our Mars bars!”

The method of training changed too. Aimless sprinting went out of the window; the focus shifted on training with the ball. Squad members were given individualised briefs to make them fitter and sharper. For arguably the first time in their professional lives, the players had a coach who did not want them to just train harder but also rest well. Specialised exercises in the morning was another novel idea, which again met some consternation.

The players’ misgivings, though, slipped away with time. As the older members realised that their careers could be extended thanks to the benefits passed on by the new gaffer, they gradually bought into the idea. Those who did not, were replaced by willing foreigners, particularly Frenchmen, sourced from Wenger’s extensive network.

Encouraged by the results, the club hierarchy backed the manager unequivocally. Arsenal’s administrators were also won over by the football. Sterile play which demanded intensity and work rate was replaced by a flowing, attacking style. Wenger, an aesthete at heart, saw entertainment as an imperative and he instilled the belief into his squad.

Over the manager’s first decade at the club, Arsenal went on to win eleven trophies and nearly achieved the ultimate European glory. The apogee of Wenger’s time at the club, though, was the 49-match unbeaten run from 2003, which also included an entire league campaign. The feat had not been achieved in English football for 115 years and it has not been repeated since.

The success fashioned by Wenger meant that the foreign coach was no longer an object of derision. In fact, non-British managers are likelier to get a job now; the last five Premier League titles have been won by a foreign head coach. Wenger broke the glass ceiling for them all.

From revolution to anachronism

The French manager also gained from a culture he later came to despise. The spending unleashed by Arsenal in Wenger’s early years, although insignificant by today’s standards, heralded the era of astronomical transfer fees for players. In the late 1990s and early noughties, it was only Manchester United and Arsenal that could afford to pay over the odds for their acquisitions. But as the years passed, the riches were spread wider and Arsenal lost out.

This was the consequence of a move about which Wenger harboured doubts. In its desire to move to a significantly bigger stadium, seeking improved annual revenues by nearly £100 million, Arsenal left its old home at Highbury. Wenger, who holds a degree in economics, was worried about the ramifications. Suddenly, Arsenal could no longer pay top dollar for its recruits. A couple of years before the UK had to come to terms with an economy in recession, Arsenal’s new home already demanded austerity.

Wenger could never return his beloved club to its glorious days. The second half of his tenure at Arsenal was about coming to terms with the reshaped reality. Wenger, eventually, could not. He will depart after a season in which Arsenal seems set to finish with its lowest ever points tally in the league under his leadership. For years, Wenger managed to lead his team into the Champions League, Europe’s premier club tournament, but the Gunners are now set to miss out on participating in the competition for the second season running (unless they win the Europa League). These are unprecedented failures.

In terms of the club’s financial outlay, Arsenal has not dramatically underperformed but the manager can no longer inspire his players to defy the odds. Wenger has also spent the goodwill he had built over two decades, by his inability to rejuvenate the team with appropriate signings and also by an unyielding insistence on his footballing philosophy. Sadly, like many great individuals, Wenger realised his failings later than he should have. Thereby, in recent years, he endangered his legacy and left many wondering whether he always put the best interests of Arsenal before him.

Wenger is an anachronism now. When he leaves Arsenal this summer, the manager will be the last man in top division football across Europe to have been appointed in the 20th century. Remarkably, the longest-serving manager in the Premier League after him is Eddie Howe, who was hired by Bournemouth only in October 2012.

It remains inconceivable that Wenger will be entirely out of football, so deeply has he allowed the sport to define him. Yet it is a game that has somewhat passed him by. Wenger may still go out on a high if he leads Arsenal to the Europa League title next month but the club no longer challenges for elite prizes in football. That must serve as an indictment of his methods. They are no longer revolutionary.

But his departure in the most cosmopolitan of moments for English football is poignant. In the post-Brexit reckoning, the distrust of the foreigner has resurfaced with greater intensity in British politics. English football, however, remains stridently internationalist. The Premier League now is a host to the most eclectic bunch of footballers from various parts of the world. Although globalisation has much to say for its transformation, Wenger can duly take some credit. Even when he will be not around next season, the innovations he pioneered will go on unchallenged.

Priyansh is a freelance sports writer based in Delhi.