The glory belonged to the Argentina fans alone, who had time and again lifted their troubled spirit with songs of celebration even when there had been so little to celebrate. 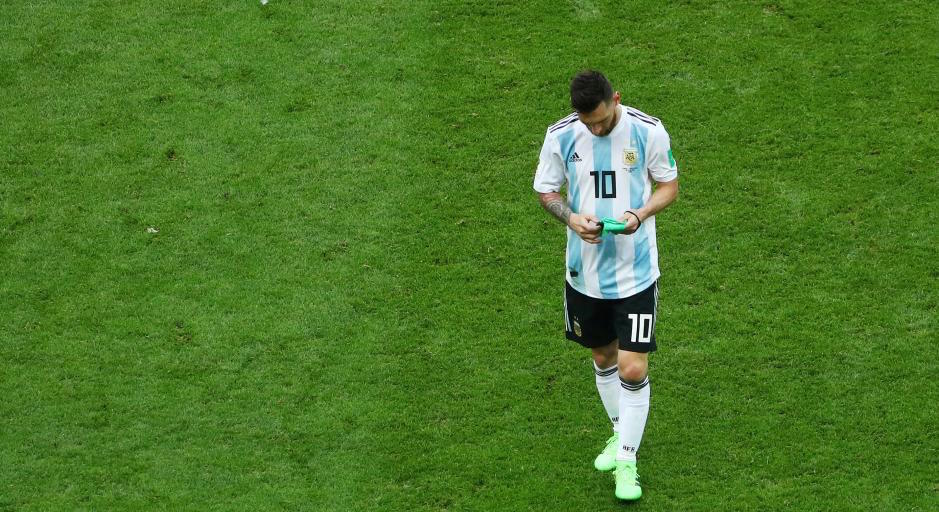 Argentina's Lionel Messi looks dejected at the end of the match against France on June 30, 2018. Credit: Pilar Olivares/Reuters

Kazan, Russia: At the end, they all stood. The afternoon had seen the Argentinean fans dance, jump, sing, and wave their banners and flags. They coloured the Kazan Arena in their blue and white colours. Unlike the stadiums in Nizhny Novgorod and Saint Petersburg, the seats did not match Argentina’s kit this time. But, once again, they turned the surroundings in their own image.

By the evening, with defeat’s arrival, Argentina’s blue and white had turned sombre. No longer did the colours bounce and shimmer under the Sun. Events of the past couple hours had sobered them up. The Albiceleste supporters still clapped and rallied their heroes but their pot of fortune was empty now. There would be no more deflected goals, no 30-yard worldies to elicit fervent thank-yous from fans to some divine spirit in the sky. Argentina, as much as it tried not to, had succumbed to itself.

For about 10 minutes into the second half, though, hope had flickered. In spite of the forces of self-destruction, Argentina found itself ahead by two goals to one. The football of imprecision was proving to be the argument for victory. Argentina had begun like a rudderless boat but a fit of good fortune had chaperoned the team onto the correct path.

Up till that point, the bruising had been severe. Kylian Mbappé, who was to tear the Argentine dream down later in the afternoon, shook the defence with his speed. For the early French penalty, Mbappé was unceremoniously pulled down by Marcos Rojo, whose desperation was conveyed by his flailing arms.

The ill-feeling was to spread further. Argentina hogged the ball after falling behind but ideas would not come to them. Jorge Valdano’s general statement about the rot in Argentinean football assumed a different meaning: “How are we supposed to know what to do with football if we don’t even know what to do with Lionel Messi?” Here was Argentina, seemingly on the verge of being destroyed by France’s ferocious pace, unable to get its best player involved.

Messi ambled contemplatively, as if he was working out how to move beyond the maze constructed by his own teammates. Everywhere he ran, obstacles appeared. Occasionally he made some headway, only to be let down by a weak touch or a poor pass from a colleague. It was like playing football on the computer, with the game hacked to ensure the difficulty level fluctuated every few seconds.

On the margins of the pitch, the Argentinean coach Jorge Sampaoli moved left to right. Ever since the match had begun, nothing could bring him to the seat on the bench. Perhaps believing that his team’s rhythm depended on the way he conducted himself, the manager worked himself into a feverish mood. If this was an orchestra, Sampaoli’s performance would have been cut short. The incongruence of a conductor with tattooed biceps peering through his t-shirt was matched only by the discordant notes his players insistently produced.

Argentina needed a striker, someone who could turn this reckless beating of instruments into dulcet tones. But three of its most feared men – Gonzalo Higuaín, Sergio Agüero, and Paulo Dybala – were cooling their heels on the bench. The coach had not trusted them, leaving Messi to play with individuals who wished to attract him to an incoherent pop song while he was parsing through a John Coltrane LP.

The unintelligibility of this coordination forced Sampaoli to seek urgency, flexing his bulging arms eager to jump out of his white top. But the music would not come. Instead, it was France who corrected the itinerant rhythm. Just when Argentina would think its control of the ball meant that it was actually establishing control, a sharp response was offered. The slow, ageing Argentine defence was given an appropriate run-around.

And then, miraculously, light broke through. Even as death knocked on the door, Ángel di María found the courage to breathe life into Argentina. His feet exchanged the ball before di María struck a ferocious shot from about 30 yards into the goal. Argentina had done little right but the magic of chaos was under its auspices. Somehow, the teams were level at half-time. But then Sampaoli and his team’s journey had evaded explanation to this point.

Three minutes into the second half, though, parody took over. Messi had shifted the ball to his famed left foot, threatening to unleash its ire on the French. He did not hit it with his usual precision and that was probably for the best. For his shot required a deflection off Gabriel Mercado to floor France. Argentina was transported to a fool’s paradise. France was much the better team but the Argentine dream had legs of its own now.

For a few minutes, Argentina could believe that victory was in its grasp. Its supporters sang with all their might, a lyrical background to the comedic drama playing out in front of them. Their conductor was not Sampaoli; a sense of destiny gave them their music. The imprecision stayed with the players. Federico Fazio passed the ball back to ‘keeper Franco Armani but it found its way to the Frenchman Antoine Griezmann instead, who rounded the goalie but was illegally denied the chance to pass it into the unguarded goal. The referee did not see the foul, Argentina was running away scot-free.

Soon, the luck ran out. If one stunning goal was not enough, we had another. France’s Benjamin Pavard gave the ball reckless leather, his and his teammate’s frustration bound up in the shot, and it tore through the air to leave everyone agape. Argentina was not going to remain unpunished for the smash-and-grab after all.

Over the next 10 minutes, the Albiceleste dream was extinguished. Mbappé switched on the jets in his shoes to overwhelm Argentina with that one thing it feared the most: pace. The creaky bodies in Argentinean blue and white gasped for life but found no support. Resignation descended upon Sampaoli’s players. One more challenge could not be drawn out of them anymore.

Yet with the dying embers fading out of sight, there was still time for questioning fate. Messi’s arrow-like cross found the head of Sergio Agëero, who headed it home, and Argentina had a minute to extend their ridiculous story. But the parody had run its course. Soon, the French players ran amok to celebrate. Argentina, after running for 95 minutes, stood in silence.

Its fans who had made the team feel at home over the past fortnight were left contemplating the journey home. Argentina’s players had nothing more to offer. Their limited talent had taken them as far as it could have. A statement by Valdano, who captures the essence of his country’s football better than most, earlier in the tournament bears restating: “The decline begins with culture, and we have to recognise the lads gave all the huevos (balls) the fans demanded. But huevos are not enough.”

‘Bronca’ (the spirit of resistance) is another word often associated with Argentinean football. We saw plenty of both bronca and huevos – but skill and elegance won the day. France represented the best merits of today’s football; Argentina showed it could fight but the poverty of its technique could not be hidden away. Even one of the best players in the world cannot obscure his team’s delinquencies.

Messi could only offer a pained expression in the end. He is the barometer of this side’s emotional state. His teammates could imitate his pain but his genius was beyond them. The glory belonged to the Argentina fans alone, who had time and again lifted their troubled spirit with songs of celebration even when there had been so little to celebrate. The emotional rollercoaster of Saturday, however, remained an obstinate step ahead of their resolve.

Even as some fans clapped their heroes off the pitch, my eyes met those of a spectator who stood with his back to the proceedings. He looked up at me and I was moved to offer a compassionate smile. He smiled back, his eyebrows lifted. Not a word was uttered but his expression conveyed what we all knew – Argentina’s magic and its misery had crashed into each other’s paths, leaving a delightful mess in their wake.