Anatomy of A Collapse: India’s Batting Woes Are Not Entirely Shocking

No amount of boisterousness in front of press by Ravi Shastri is going to change it. 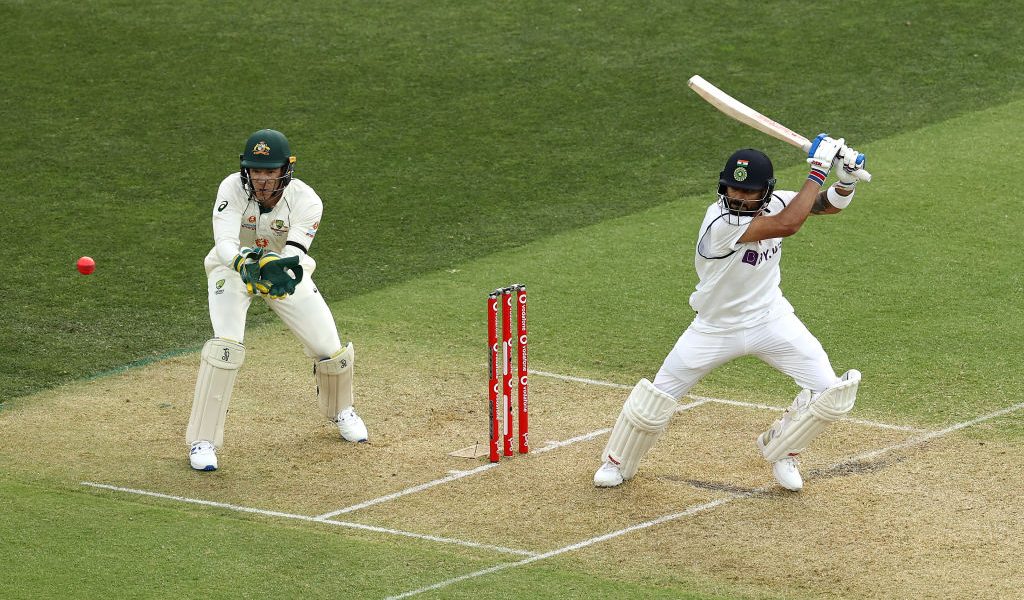 Virat Kohli on crease during the Adelaide Test. Photo: Twitter/@BCCI

For the white ball leg of India’s current outing in Australia, the Indian team donned a kit that resembled the one from early 1990s.

The pleasantly surprising move allowed the fans to indulge in a nostalgic drive while witnessing some quality cricket. During the first one-day match however, Sanjay Manjrekar on commentary remarked that along with the kit, India’s fielding standards too were reminiscent of those the team was known for back in the 90s. Manjrekar is somewhat infamous for having a few sarcastic swipes at the Indian team from time to time and few would have raised their eyebrows over it.

In fact, India finished the limited overs leg with fairly respectable returns. But for a few fielding lapses in an odd game, nothing about the team’s effort would bring back the less than pleasing memories of the 90s. Nothing for the fans to lose sleep over. Well, not yet anyway. Except that the horrors of the 90s were reserved for the 3rd innings of the opening Test at Adelaide. The humiliating capitulation on Saturday morning that saw India register its lowest total ever in a Test innings was not a sight entirely unfamiliar to a generation having lived through the ordeals from Durban to Bridgetown and from Hamilton to Ahmedabad.

But with the constant emphasis in the media on this team’s superior pedigree to those in the past, the fans could be forgiven for thinking those tribulations were something they’d never be subjected to again. And even if one accounts for an odd aberration that isn’t thematic of the team’s quality, this Test had no business being one of the occasions considering the position of authority that Virat Kohli’s men had secured at the end of the second day’s play.

Also read: Naming Names for the Massacre at Adelaide

India went into the third innings with a handy 53 run lead, though it could have been a much more substantial one with neater catching. India had lost opener Prithvi Shaw late on day 2 but Shaw hasn’t inspired much confidence of late and with the experienced senior pros in the middle order still in the dugout, India looked at building a solid ground to defend, perhaps even batting Australia out of the Test. But that obviously didn’t go according to plans.

Nightwatchman Jasprit Bumrah succumbed to Pat Cummins in the second over of the day. That was on expected lines. Bumrah had already played his part. In walked Cheteshwar Pujara. Opener Mayank Agarwal was just looking like he was ready to see out the new ball despite having had a lifeline the previous night. This was the critical partnership India was counting on. Agarwal and Pujara had to bat long and wear the Australian bowlers down to provide a platform for Kohli, Ajinkya Rahane, and Hanuma Vihari to capitalise on later in the day.

The next thirty odd minutes proved to be India’s death knell as Cummins and Josh Hazlewood delivered an exhibition of peerless fast bowling reducing Indian batsmen to mere spectators resigned to fate. From being only one down for 15 runs at one point, India lost 8 more adding another 16 runs to the scoreboard. Cummins and Hazlewood ran in, consistently hit the three quarter length, exploited bounce, and ensured the seam movement was just about enough to take the batsman’s edge almost every single time.

Virat Kohli walks off the field after being run-out by Australia in the first innings during the test match at the Adelaide Oval in Adelaide. Photo: PTI/AP

Pujara found himself playing the wrong line, Rahane and Agarwal got caught in the crease, Vihari played with hard hands, and Kohli – not for the first time in his life – chased a wide one after committing himself on the front foot. The pitch too played quite visibly quicker than it did for the first two days. The bounce was true and the ball carried above the keeper’s shoulders. The edges were no longer carrying short to the slips. Add to it, two of the world’s best bowlers extracting nasty seam movement constantly threatening both the edges of the bat.

These were not the most conducive of conditions for batting. The Australian batsmen themselves found it incredibly tough to find any rhythm on this pitch against an attack slightly less potent than their own. But that does not explain away a chink in the armour that India has refused to address for a while now – that this batting unit is not quite as good as it is often made out to be.

That India’s bowling attack is the most potent one in the world across conditions is no longer an opinion now. The claim has demonstrable evidence. But the same cannot be said about batting. Earlier this year, India played two Tests in New Zealand in daunting conditions and threw in the towel rather easily. It must be clarified India lost the toss in both Tests and therefore had to bear the brunt of a green seaming wicket first up. But interestingly, it is the second innings on both occasions that the Indian batting got skittled out rather cheaply – the phase of a Test match most batting friendly in New Zealand.

On their 2018 South Africa tour, India conceded the Test series under similarly testing conditions. In the two Tests they lost, India lost seven wickets for less than 100 in three out of four innings. Things didn’t change much later that year in England either as India similarly found themselves wanting against the moving ball be it at Edgbaston, Lord’s, or The Oval. And when one views Saturday’s debacle at Adelaide under the weight of this recent historical context, things suddenly do not seem all that shocking. In fact, the showdown from Cummins and Hazlewood must’ve painfully reminded the Indian fans of their team’s travails at Old Trafford in 2014 when James Anderson and Stuart Broad kept pitching the ball up and the Indian top order kept guiding everything to the slip cordon. Three out of India’s top six have remained the same across the six years between these two Tests but the demons have not been put to rest yet.

Now, no team in the world is comfortable batting against sustained quality of fast bowling when the conditions assist the bowlers so much. And despite some glaring technical problems with India’s batsmen, the scorecard from this innings does not fairly appraise the team’s bating reserves. It was one of those freakish passages of play where everything that could have gone wrong did go wrong. It is entirely possible Cummins and Hazlewood will bowl even better at some point in the remainder of the series than they did today without coming anywhere close to replicating the same returns. And at the same time, Indian batsmen too will at some point get away with playing more profligate shots outside off stump.

Having said that, India’s batting woes outside the subcontinent very much continue to remain and are unlikely to go away any time soon. India’s fast bowling stocks are stronger than ever though and that allows the team to produce results from time to time that flatter to deceive. Over the course of Test cricket’s history, rarely have teams thoroughly cracked what would qualify as alien conditions. It is perfectly normal for teams to take a beating down when odds are so heavily stacked against them.

The current Indian team is no exception. They still remain an extremely formidable force in their own backyard and that enviable home record is something that deserves to be written about much more. But away from home, contrary to what the fans have been led to believe, this batting unit is hardly any stronger than the ones India has produced since the turn of the century and remains just as vulnerable as ever. No amount of boisterousness in front of press by Ravi Shastri is going to change it.