From Jadeja To Kambli, What Keeps an Incredible Week of Indian Cricket Relevant 25 Years Later?

Like most other things, cricket in the 90s too is viewed through a deeply romantic lens for two major reasons. This is particularly true of the 1996 World Cup. 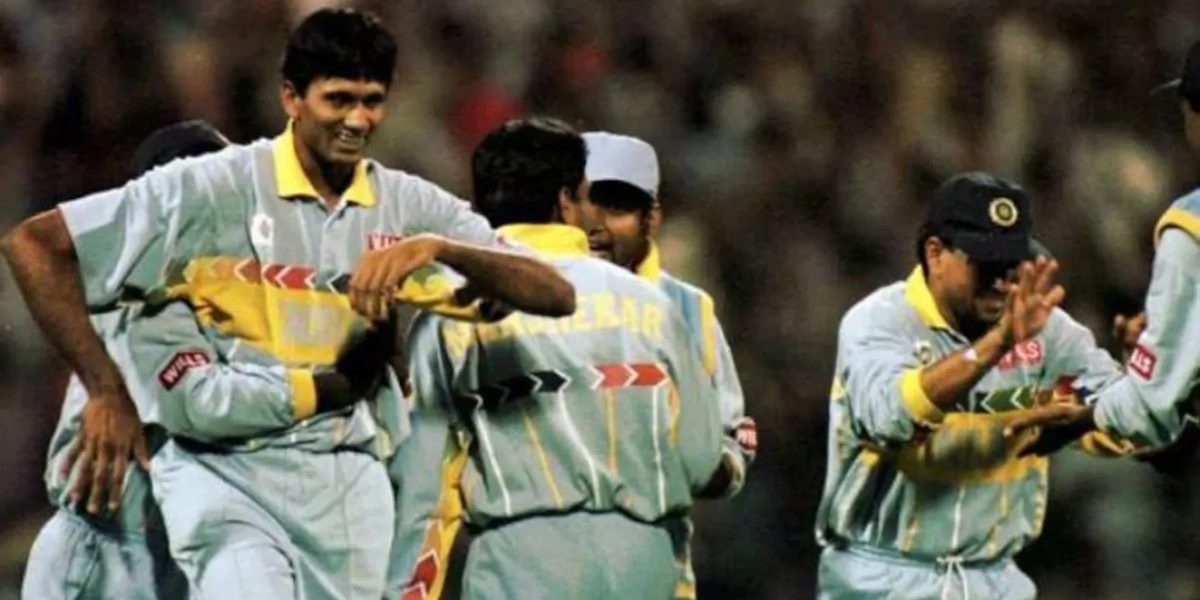 The Indian cricket team celebrates its victory of Pakistan in the 1996 World Cup. Photo: Reuters

There is a reason the 1990s remain an unusually romanticised period in India’s cultural memory. Academics have endlessly deliberated the social impact of the economic reforms introduced at the start of the decade. A new middle class emerged whose material aspirations were shaped by a wave of consumerism hitherto unseen and unheard of. The 90s certainly oversaw a metamorphosis of the Indian society and in a way, marks the point when the country stepped out of the shadow of its colonial past only to, well, westernise further.

However, that doesn’t entirely explain the 90s being so disproportionately represented in India’s myths and memories. The other equally important reason for the period being so greatly mythologised is it has shaped the living memory of India’s first-ever Internet generation. The millennials, now mostly in their late 20s and early 30s, are the first generation having almost entirely lived in a liberalised India and have also had the advantage of being early adopters of technology and social media. This advantage has lent them a near-monopoly over narrative-building and they have milked it to no end in exceptionalising a period they have a great nostalgic attachment to.

Like most other things, cricket in the 90s too is viewed through a deeply romantic lens for these very reasons and therefore, the teams, the characters, and some of the memorable matches from the time are among the most fervently retold tales. Memories loaded with nostalgia often paint a selective picture of any era and the cricketers of the 90s too are no exception to this trend. The legend of the 90s involves significant myth-making and such is the power of storytelling that it presents a very inflated estimation of what the actual quality of cricket played back then was.

But some stories retain their essence more than the others and the 1996 World Cup is one such chapter that holds its conversational currency even a quarter-century since its conclusion. This week marks 25 years of the two games from the World Cup that remain firmly etched in the collective memory of a cricket-obsessed people, but for diametrically opposite reasons.

On March 9, India faced Pakistan in the quarterfinal and the biggest story was Pakistan captain Wasim Akram pulling out of the game moments before the toss. To this day, fans continue to theorise conspiracies to explain what they cannot make sense of. In Akram’s absence, India cashed in on Pakistan’s misery and put up what would back in the day be reasonably called a huge total.

Ajay Jadeja, India’s charming dasher in the middle order, played a cameo of a lifetime, which has attained the status of folklore over the years. Jadeja pulled no punches as he smacked Waqar Younis all over the park with the Bangalore crowd going crazier with every run coming off his bat. Jadeja put on display the kind of audacious strokeplay that for its time felt too ridiculous to be true. Younis, known for his menacing pace and terrorising toe-crushers, cut a sorry figure at the end of his spell. For a generation of Indians who had horrible memories of those games in Sharjah, it was a sight to behold.

But other than India delivering beyond expectations, the reason this particular game remains so special is the feeling of anxiety the Pakistan team used to invoke among Indian fans back then. In addition to Wasim and Waqar, there were several Pakistani cricketers who were household names in India during the 90s. The likes of Saeed Anwar, Inzamam-ul-Haq and Salim Malik were superstars in their own right and had built a reputation an Indian fan would inconsolably be wary of. This is in total contrast to the situation today, where Indians would struggle to put up a Pakistan XI on paper without checking their smartphones.

But wins against Pakistan didn’t come cheap back in the mid-90s and that explains the legend built around this one. There has been an overkill of the retelling though and one could be forgiven for having had enough of the Aamir Sohail-Venkatesh Prasad duel being replayed on their television screens.

The joy at Chinnaswamy, however, was short-lived as India faced a marauding Sri Lanka in the semifinal four days later on March 13 at the bigger, louder and more raucous Eden Gardens. The Kolkata crowd went absolutely boisterous as Javagal Srinath removed both the swashbuckling Sri Lankan openers Sanath Jayasuriya and Romesh Kaluwithrana in the very first over. The Indians could smell blood. It felt like something very special was in the offing.

But in walked Aravinda de Silva and poured cold water on any such premature celebrations. de Silva’s counterattack totally derailed India’s bowling plans and they failed to react. He amassed a 47 ball 66 which remains one of the most impactful World Cup knocks ever played, but has to be the greatest 66 ever scored on a cricket field. But the cacophony and absolute chaos that ensued as India came out to bat in pursuit of the 252 runs is what affirms this game’s status as perhaps the most ignominious chapter in Indian cricket history.

There was a popular stereotype that characterised the Indian team of the 90s. It said the team was alive in a contest for only as long as Sachin Tendulkar stayed at the crease. Few other occasions vindicated this as much as this game did, as India went from 98/1 to a shambolic 120/8 in the space of a few overs once Tendulkar was dismissed. What followed only added to India’s embarrassment as the game had to be abandoned and ruled in Sri Lanka’s favour as the Kolkata crowd turned into an unruly mob, potentially threatening the players’ safety.

Among the most hysterical images that one might recall the events of the day is Vinod Kambli walking off the pitch in tears; gesticulating he still had it in him to turn things around. In every drop of tear flowing off Kambli’s eyes that day, a tiny bit of Indian dream poured out. Years later, Kambli made sensational revelations indicating the game was compromised by some of his teammates. But owing to the caricature that he’d made of himself over the years, it was hard for anyone to take Kambli seriously.

Why are these matches still fresh in our collective memory?

Twenty-five years later, these two games still remain unusually fresh in the collective memory of a generation that honestly has had a lot to cherish since. As the years passed, the Indian team has only grown from strength to strength and today enjoys the status of a cricketing behemoth. But therein lies the problem. With its ruthless professionalism and enviable record, the current Indian team isn’t quite fit to easily lampoon. Their wins as a result do not feel as special since they are mostly on expected lines. And even some of the most heartbreaking losses are easier to move on from, as alternatives to keep one’s mind occupied are more readily available than ever before.

That certainly was not the case in 1996. A World Cup was a quadrennial event and between two, there was little else to look forward to. Instead, a thoroughly engaging multilateral tournament like the Indian Premier League occupies the prime time slot for two months every year now. Even in international cricket, there have been eight ICC events in the last ten years. A World Cup simply isn’t awaited with the same intensity and longing anymore. The memories too therefore are equally fast-moving and fading.

Floodlights, coloured clothing, theme songs, mascots, and hi-tech television broadcasting, which felt too captivating in the 90s, are rather the standard norm today. The habitual and repetitive consumption of elite sport means a particular event isn’t as likely to create a lasting impression as it did in past. This doesn’t mean Indians aren’t just as hooked to the team’s fortunes in a World Cup these days but the platter of choices in front of them is too big for heartbreak or jubilation to hold its currency for long.

Cricket writer and novelist Siddhartha Vaidyanathan hosts a podcast called 81AllOut. The title is a self-deprecating homage to India’s famous drubbing at Barbados in 1997. It instantly connects among a generation of fans who carry the trauma of that loss to this day. India recently had an even worse thrashing at Adelaide. But is 36AllOut likely to acquire its cultural cult in due course? Perhaps not quite.

That’s something distinctly unique about the cricketers of the 90s. Their biggest moments are preserved and recounted with far greater zeal and gusto. While Ajay Jadeja enormously benefits from it, Vinod Kambli, well, not so much.