Your Guide to the Most Anticipated Space Launches of 2020

ISRO is gearing up for the first test flight of Gaganyaan in December 2020, without any crew, followed by another test in mid-2021. 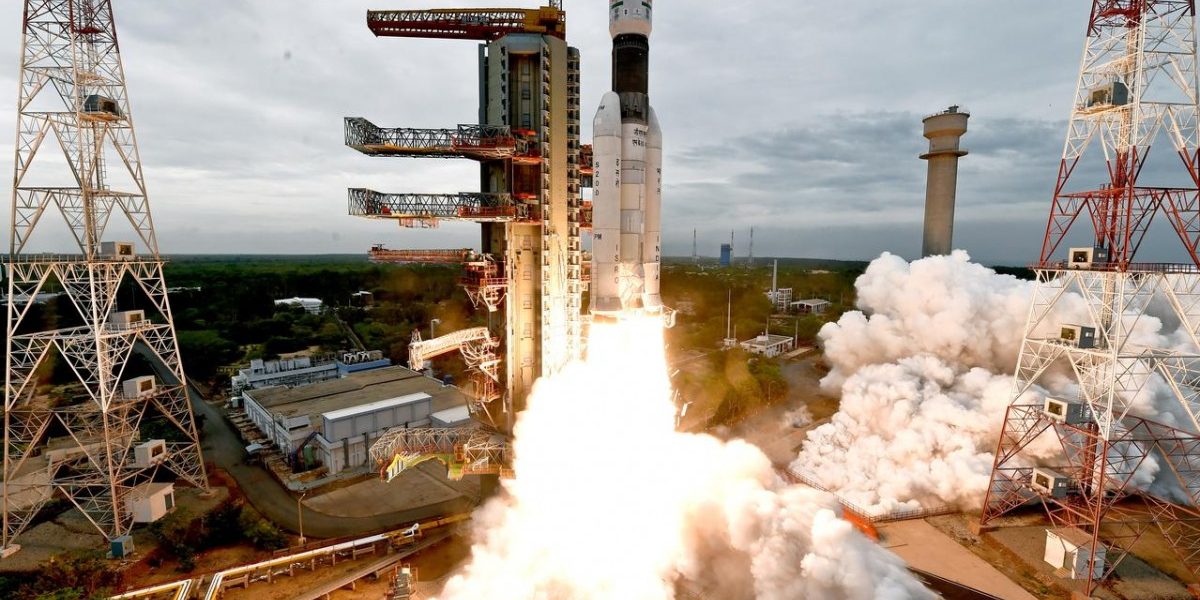 2019 has been a thrilling year for space exploration with over 100 space launches. 2020 promises to be even more exciting with almost double the launches planned! Here are the most anticipated space launches of 2020, which include missions to Mars, Moon landings, Sun orbiters, new breeds of rockets and progress in human spaceflight. That’s a lot of space to cover (pun intended), so grab a coffee and let’s get the juices flowing.

The fourth planet from the Sun is about to get some love. NASA’s famed Curiosity rover will be getting two friends in the form of NASA Mars 2020 and the ESA Rosalind Franklin. Both crafts are to be launched in July 2020, separately, and they will rove and study the Martian surface to look for signs of past and present life. Both rovers boast a drill and advanced instrument suites for the study of the Martian surroundings. 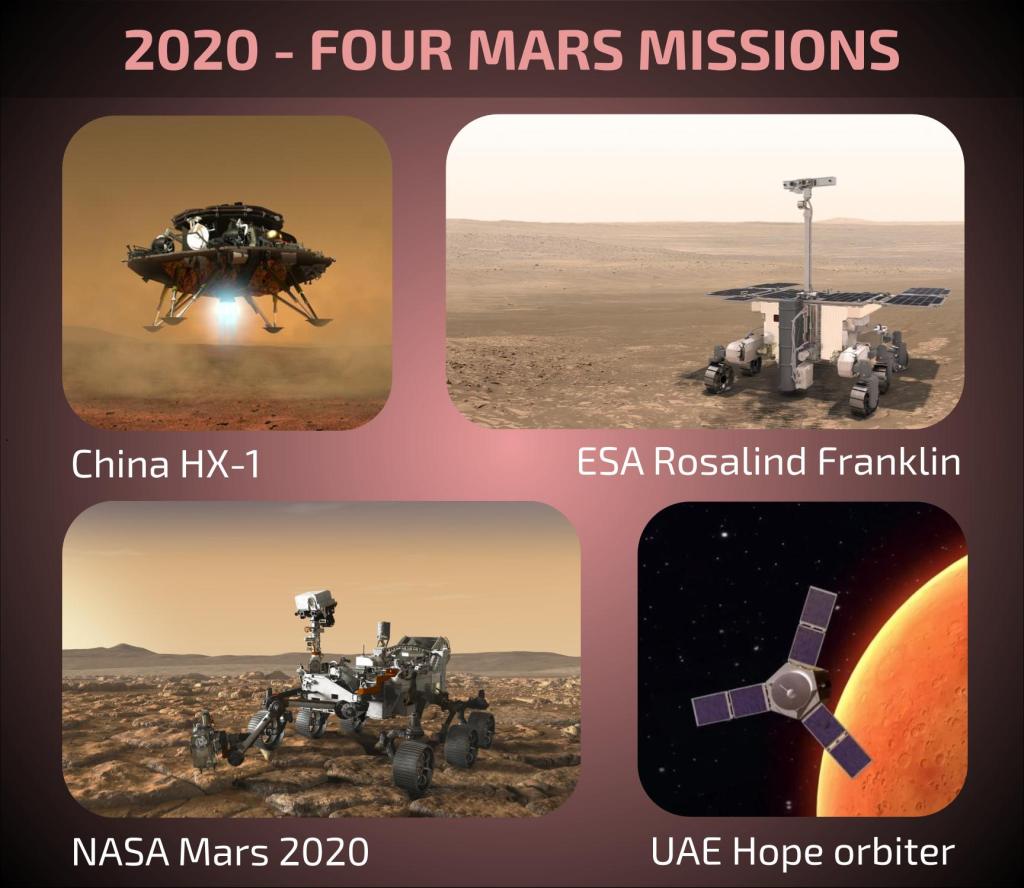 Hot on the heels of a very successful farside Moon landing with Chang’e 4, China aims to take it up a notch in 2020. It is targeting Q3 for the launch of its first indigenous Mars mission Huoxing-1 (HX-1), consisting of an orbiter and a rover. A successful mission would be a sizeable addition to China’s growing space prowess.

The United Arab Emirates are also joining the Mars club with their Hope orbiter. Hope will be UAE’s first interplanetary mission and it aims to study Mars’ climate variations from orbit.

When all these four spacecraft reach Mars in 2021, they’ll add to the existing portfolio of eight machines on Mars – six in orbit and two on the surface. What a year 2021 would be when we can say to our kids that there are currently a dozen spacecraft studying Mars and they’re all helping us build a future there.

2. Return of astronauts from US soil

After retiring the Space Shuttle in 2011, the US lost its capability to ferry astronauts to and from space. It hopes to regain the same in 2020. As part of NASA’s commercial crew program, both Boeing and SpaceX will launch their first human spaceflights to the International Space Station (ISS) this year. 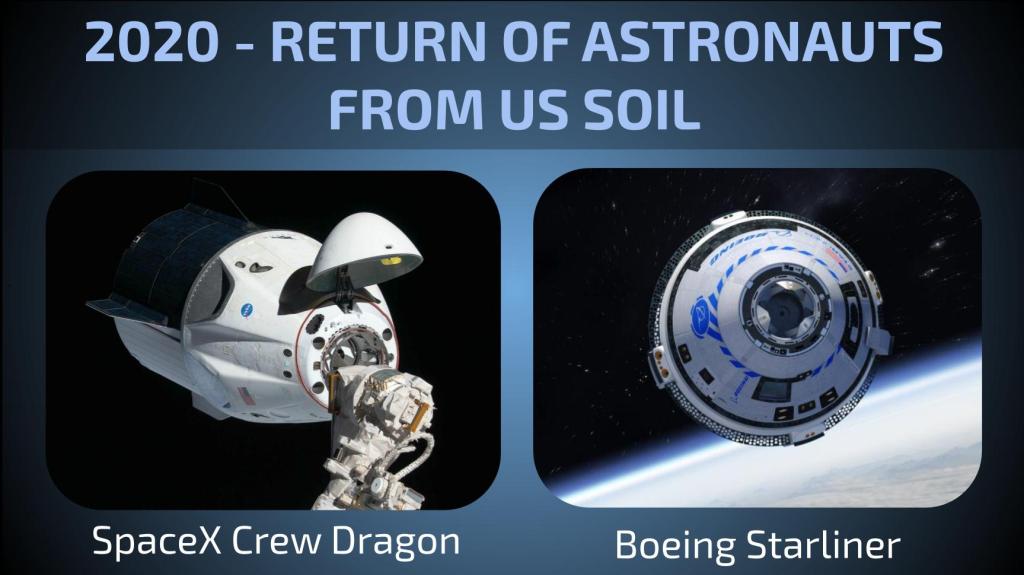 Return of astronauts to the ISS from US soil in 2020 will be onboard SpaceX and Boeing capsules. Illustration/Image Credit: Jatan Mehta/SpaceX Boeing

Boeing had an unsuccessful uncrewed test flight of its human-rated Starliner capsule last December, so its Q2 2020 target for carrying astronauts to the ISS will likely get delayed until the end of the year. SpaceX may leap ahead as it kickstarted the year with a successful abort test on January 19 of its capsule Crew Dragon. It will now be followed by a crewed flight in Q2 2020, carrying two US astronauts to the ISS. A successful mission would make SpaceX the world’s first private company to send humans into space.

In all, NASA hopes to end reliance on Russia for ferrying astronauts and thus also forgo the increasingly expensive use of Russian rockets.

Also read: Book Review: A Historical Overview of How India Is Using Space for Its Security

With ISRO’s Chandrayaan 2 lander crashing on the Moon’s surface last year, the organization is set to give the landing another try with Chandrayaan 3. Chandrayaan 3 will consist of a lander and a rover, not an orbiter as the Chandrayaan 2 orbiter is functionally nominally. The lander will carry instruments like a seismometer and a thermal probe, while the rover will carry spectrometers to analyse the lunar surface. A successful lunar landing will make India the fourth organisation in the world to achieve the feat. 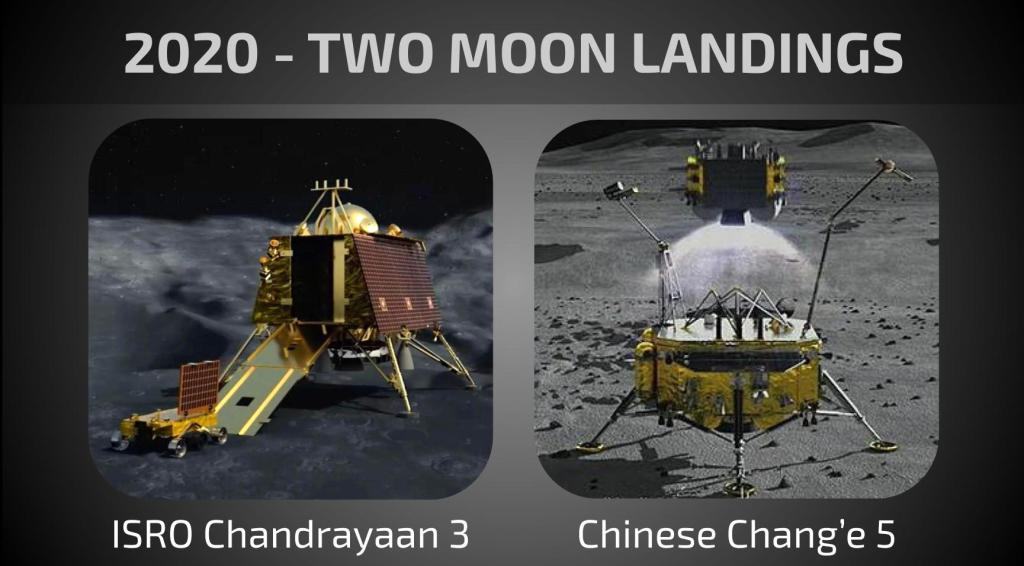 India and China aim for another round of Moon landings in 2020.
Illustration/Image Credit: Jatan Mehta/ISRO, CNSA

China is gearing up to launch the Chang’e 5 spacecraft in 2020 end – its first lunar sample return mission. Once it lands in a geologically young and unique region on the Moon, the lander will dig 2 meters below the surface and scoop out two kilograms worth of lunar soil. A capsule carrying the sample will perform an autonomous rendezvous and docking with a return module in orbit, which will then bring the sample to Earth.

It is notable that the rendezvous and docking will be practice for a future Chinese human mission to the Moon. If successful, Chang’e 5 will represent China’s third successful Moon landing, each a notch above the last. All of this in a decade when no one else seems to be nailing lunar landings. Third time’s the charm I guess.

4. Return of the super heavy-lift rockets

If there’s a jackpot to be won this year, it is the hopeful return of the super heavy-lift rockets. The Apollo Moon landings, considered to be one of humanity’s best achievements, were possible in major part thanks to the existence of the behemoth rocket Saturn V. Since then, no such super heavy-lift rocket has existed. If all goes right, this situation can change with the launch of two much-awaited rockets.

First is a hopeful November launch of the Space Launch System (SLS), NASA’s vehicle of choice for their future deep space exploration efforts. SLS’s first mission will be called Artemis I and will launch the uncrewed Orion spacecraft on a trip around the Moon, alongside launching 13 CubeSats. A successful launch is critical for NASA to be on target for landing humans on the Moon by 2024. 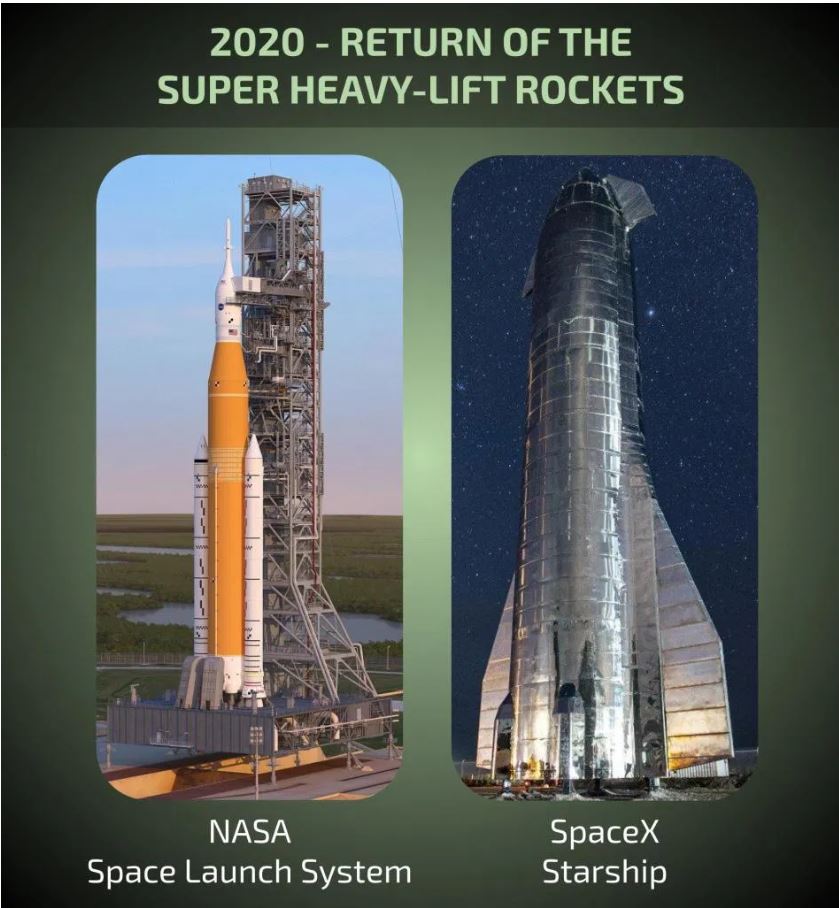 In its maxed out configuration, the SLS can lift 130,000 kg to the low-Earth orbit, more than twice the current-best SpaceX Falcon Heavy can.

The second super heavy-lifter is SpaceX’s Starship, which in the Elon Musk timeline goes orbital sometime this year rather than later. The SpaceX Starship will be as capable as the SLS. In its maxed out configuration, Starship will be even more powerful and is central to Musk’s Mars colonisation plans.

Super heavy-lift rockets are needed for effective deep space exploration and if we want to have any hope of colonising the solar system.

Meanwhile, SpaceX has already democratised traditional access to space by massively lowering launch costs with its medium-lift rocket Falcon 9. This year it will double down on slashing prices further by reusing more parts of the rocket and more often so. To survive in such a post-SpaceX market, ESA is aiming for the maiden launch of its Ariane 6 medium-class rocket. Ariane 6 will be equally capable as ESA’s current workhorse Ariane 5 but will cost half as much. The Japanese aim to launch a similarly capable rocket, the H3, to replace their costlier H2B.

Not all new rockets need to be big – in fact, the opposite is truer. Smaller satellites, notably CubeSats, have become increasingly easier to make and operate, and so a market for rockets has arisen to deliver such small payloads at a fast cadence. The first of these competitors is billionaire-entrepreneur Richard Branson’s Virgin Orbit. With the successful test flight of its long-awaited Launcher One rocket in December 2018, Virgin Orbit now aims for a steady launch pace to deliver small satellites starting as early as Q1 2020.

Also notable in this category is ISRO’s Small Satellite Launch Vehicle (SSLV), which will be a smaller cousin to the Polar Satellite Launch Vehicle (PSLV). While the PSLV can lift at best 3,800 kg to the Low Earth Orbit, the SSLV will lift 500 kg. ISRO has said the SSLV’s USPs will be low cost and faster turnaround time. Its design is ready and the first SSLV test flight is expected to happen in Q1 2020, followed by a second test launch sometime later this year.

In the same space, the European Vega-C is set to replace the Vega spacecraft as ESA’s vehicle of choice for lighter satellite launches. The American Firefly’s Alpha 1 and Relativity Space’s Terran 1 rockets will take off the first time too this year if all goes to plan for these new entrants.

In 2018, NASA launched the Parker Solar Probe on a mission to go right into the Sun’s atmosphere and study it up close to unravel its mysteries! ESA wishes to join the game with its Solar Orbiter, targeting a February 2020 launch. 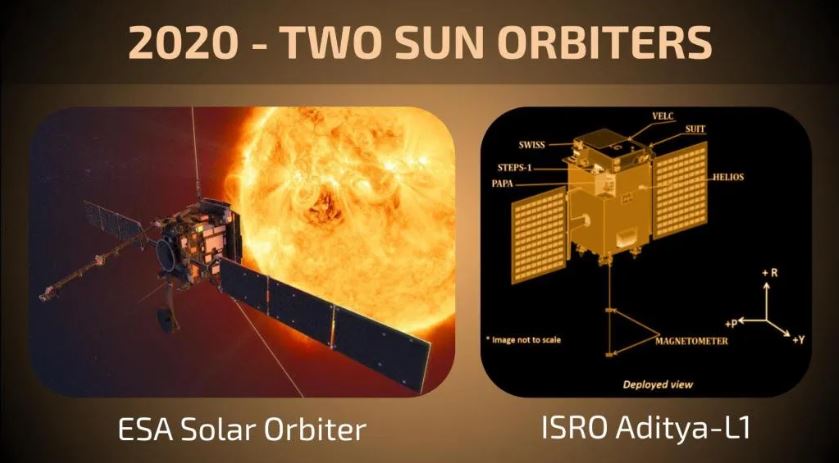 On the other hand, ISRO is launching Aditya-L1 sometime in mid-2020 to conduct uninterrupted observations of the Sun from afar. It will be placed at the first Lagrangian point (L1) between the Sun and Earth, where the dynamic gravitational attraction between these two bodies roughly cancel out.

The L1 point is not a point as much as a small region in space. It has been host to multiple solar weather monitoring and science observation spacecraft in the past, such as SOHO, ACE, WIND, DSCOVR, etc. Aditya-L1’s observations will complement data from the Parker Solar Probe and Solar Orbiter.

Preparations are in full swing for India’s Yuri Gagarin moment. Astronaut candidates are undergoing training in Russia for ISRO’s indigenous Gaganyaan mission targeted for December 2021. To that end, ISRO is gearing up for the first test flight of Gaganyaan in December 2020, without any crew. This would be followed by another test in mid-2021 before the actual crewed mission in December.

China, on the other hand, is no stranger to the astronaut game. They have already built and flown two space stations for their taikonauts in the past – the stations Tiangong-1 and Tiangong-2. Now China wants to build its biggest space station ever, the Tiangong-3. It will be as big as the Russian Mir i.e 1/5th the size of the ISS. The core module of Tiangong-3 is targeted for launch in 2020 using China’s heavy-lift rocket Long March 5. The same Long March 5 will also do the heavy-lifting of the Chinese Chang’e 5 and HX-1 Mars missions.

Likewise, its competitor OneWeb is prepping the first batch of its satellites to be launched in January atop a Russian Soyuz rocket. After several launches over the course of the year, they too hope for more than 600 satellites to be in orbit, so they can start providing internet services to the USA before going global.

2020 is truly an action-packed year for space exploration. Even if half of the above-mentioned launches come true, that will be substantial progress as our species makes a slow but steady headway towards space colonisation.

This article was originally published on Jatan Mehta’s blog.