SpaceShare, a New Indian Project to Democratise Access to Space

A Mumbai-based company is set to crowdsource payloads from around the country, and assemble and deliver them to ISRO to be flown on a PSLV mission.

The PSLV C31 before its launch. Photo: ISRO

In January this year, officials of the Indian Space Research Organisation realised they had some room on an upcoming mission of the PSLV rocket, designated C45. The launch was to happen in February.

Satellize, formerly ExSeed Space, a Mumbai-based private company that builds satellites, expressed interest. But it was surprised when officials said on January 20 that it had a week’s time to deliver. But for the rush Satellize was able to send a fully qualified digital transponder for use on February 1.

The C45 mission eventually lifted off only on April 1. The fourth stage of the PSLV rocket on this mission, designated PS4, was special. Usually, the PSLV’s fourth stage carries the satellites it has to deploy into space, and once it does, it drifts into a fixed but aimless orbit around Earth.

But on the C45 mission, ISRO had upgraded the PS4 fourth stage. Once the primary payload had been launched, the PS4 would act like a satellite – fit with instruments of its own – as it settled into a polar orbit around Earth at about 500 km. The instruments could conduct observations and perform small experiments.

At the time of launch, ISRO predicted Satellize’s transponder, to service amateur radio operators in the country, would work for three months. “Now it has been six months, and the orbital parameters and telemetry data suggests the transponder can go on for another two years,” said Ashhar Farhan, founder and CTO of Satellize.

On the back of this success, ISRO asked the company to join the organisation’s PS4 apex committee and invited it to propose other instruments to be flown on future missions. Satellize already had one satellite launched before this, onboard a SpaceX rocket in December 2018.

That said, anything launched to space from India has to be on an ISRO rocket, so Satellize sensed an opportunity.

Under a programme called SpaceShare, Satellize is set to crowdsource 10 payloads from around the country, fit them together in “one big box” – Farhan’s words – and deliver that to ISRO to be flown on the next available orbital platform mission. 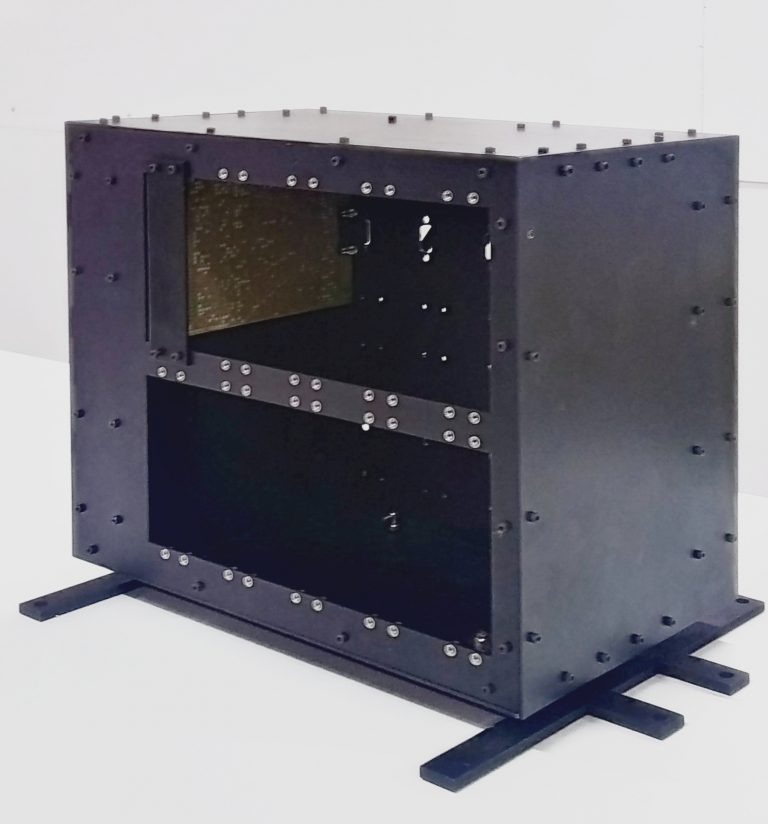 The big box, a.k.a. the SpaceShare chassis. Photo: Satellize

Because this is an ISRO initiative, as opposed to NewSpace Ltd. or Antrix, only non-commercial payloads are eligible to participate.

“We are going to solicit payloads based on the Eurocard form factor,” Farhan said, referring to the size specification of a standard printed circuit board. So each payload that goes into the box will have to measure 16 cm × 10 cm × 5 cm. 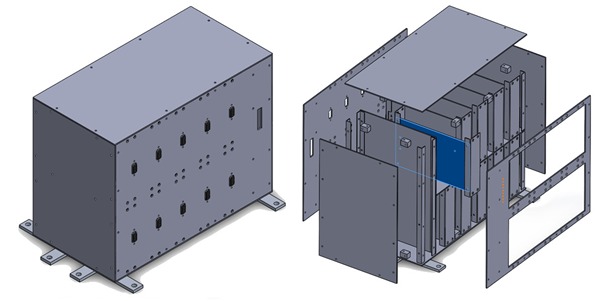 A schematic view of the SpaceShare chassis. The image on the right indicates how the payloads will be arranged inside the box. Photo: Satellize

Satellize will help the teams behind the selected payloads test their instruments to ensure they can survive launch and spaceflight.

After ISRO integrates this box onto the platform and launches the mission, the rocket will eject other satellites into their respective orbits before the PS4 part kicks in.

One side of the box carrying the crowd-sourced payloads is fit with a transparent panel that Farhan said will be “space-facing” to, for example, allow cameras to take photographs.

ISRO has agreed to donate a 200-W solar panel while Satellize will provide the power system and serial ports. Farhan said they would also take care of the ground stations in such a way that the data from each payload will be made available on the respective owners’ smartphones. This way, the participants can focus just on the payloads.

And all that remains now is to finalise and build the payloads. The Satellize website provides a link to the application form. The deadline for submissions is October 15. The payloads will be shortlisted by October 20, followed by a workshop at the Satellize lab in Hyderabad and then a six-week period to build the device.

“We will evaluate the applications on the basis of usefulness to the country and to India’s space programme, in joint consultation with ISRO,” Raju Prasad, the chief business officer of Satellize, said.

Satellize expects to deliver the fully integrated box to ISRO by December 27. The PSLV launch schedule will be determined by ISRO alone.

The entire endeavour is expected to cost the participants a lakh rupees or so – a far cry from the crores of rupees required to send satellites to space a decade ago.

“A lot of people would like to start building space payloads but they don’t have the wherewithal or don’t exactly know what to do,” Farhan said. “This way we can incubate other groups outside ISRO.”

Such groups already exist but they are too few relative to India’s size. Indeed, observers have acknowledged the country’s private space sector is miles behind its counterparts in China and the US.

Part of the problem is that ISRO and the Department of Space are just beginning to loosen their grip on the national space sector, although its members have been supportive to various degrees of private efforts. The department is also working on a Space Activities Bill expected to formalise the governance of private players and provide newcomers with a way to navigate the bureaucracy.

But this hasn’t stopped some companies from pushing the envelope, especially since investor interest is also on the rise.

Bellatrix Aerospace and Dhruva Space are working on small satellites and thruster components while others like Kawa Space and SatSure want to help companies make more efficient use of data obtained by space-based assets. Skyroot Aerospace builds rockets for small satellites and Rocketeers wants to spread the appreciation of spaceflight using model rockets.

Satellize’s SpaceShare extends these efforts in its own way.