Earth-Like Exoplanet Discovered Around Nearby Star Is Potentially Habitable

The star-planet system is zipping towards Earth. In about 79,000 years, they will replace Proxima Centauri and Proxima b as our closest star and closest potentially habitable exoplanet, respectively. 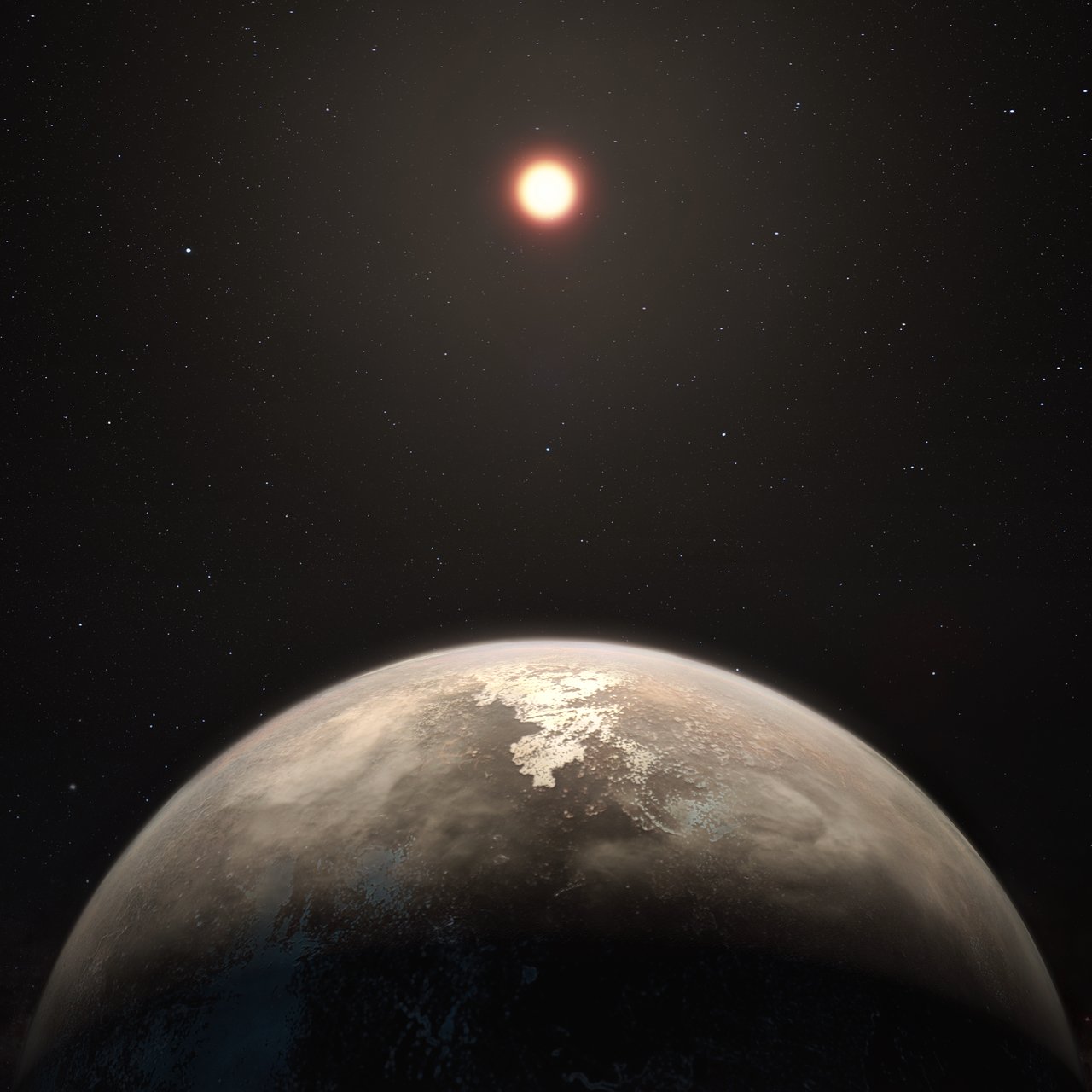 This artist’s impression shows the temperate planet Ross 128 b, with its red dwarf parent star in the background. Credit: ESO/M. Kornmesser

Astronomers working with ESO’s High Accuracy Radial velocity Planet Searcher (HARPS) in Chile have discovered a temperate exoplanet orbiting the red giant star Ross 128. This planet is similar in size and mass to Earth’s and has surface temperatures that makes the planet possibly habitable. This is the closest potentially habitable, Earth-like world orbiting an inactive star – only 11 lightyears away.

The exoplanet was detected using HARPS, which employs the radial velocity method to search for exoplanets. When two bodies orbit each other, they both exert a gravitational force on the other. As a result, both bodies orbit around their common barycentre, the centre of mass of the entire system. In several cases (e.g., Earth orbiting around the Sun), the barycentre lies within the more massive body. So when an exoplanet orbits a much bigger body, like its host star, then the star displays a small wobbling motion because the system’s barycentre is not the star’s centre but slightly away from it.

By measuring the amount with which a star gets tugged and the frequency with which this happens, astronomers can calculate the mass and orbital period of the exoplanet.

The newly discovered Ross 128 b orbits its host star, Ross 128, in 9.9 days. Its surface temperature ranges from -60º C to 20º C, which is the average range of temperatures at Vostok, Antarctica; the numbers are conducive to the presence of liquid water on the surface. The star is about half as bright as the Sun, but the planet orbits 20 times closer than does Earth, leading it to receive about 1.3 times the amount of energy we do. Coincidentally, it is also estimated to weigh 1.3-times as much as Earth.

For a red dwarf, Ross 128 is a relatively ‘quiet’ star. Other red dwarf stars, such as Proxima Centauri, are prone to tantrums: they throw up giant flares of ultraviolet and X-ray radiation that could fry nearby planets, rendering them uninhabitable. Ross 128 is calm and chill, making it easier for life to survive on Ross 128 b. Dragging its lone planet along, the star is also zipping towards Earth. Scientists estimate it will eventually replace Proxima Centauri as our closest star in about 79,000 years. Then, Ross 128 b will also replace Proxima Centauri’s exoplanet, Proxima b, as our closest exoplanet and our closest potentially-habitable exoplanet.

“This discovery is based on more than a decade of HARPS intensive monitoring together with state-of-the-art data reduction and analysis techniques,” said Nicola Astudillo-Defru, of Geneva Observatory, University of Geneva, and a coauthor of the paper, in a press release.

Ross 128 had made news earlier this year, when a series of radio signals seemed to be coming from its direction. It was later shown that the signals most likely came from one of our own satellites. Nonetheless, the star had caught the attention of the Search for Extraterrestrial Intelligence.

Cool red dwarfs are among the ideal types of stars to observe when searching for habitable exoplanets. They are not well defined. A whole host of stars that are cooler than our Sun and have between 7% to 50% our Sun’s mass fall under the red-dwarf umbrella. So they are really common, estimated to make up nearly three-quarters of all stars in the Milky Way. They are not bright enough to be observed with the naked eye, but the low luminosity offers a great advantage: they don’t bathe the orbits of planet around them in blinding light, leaving the exoplanets to be detectable. Their closely-orbiting planets also tug on the stars much harder, making their movement around the barycentre larger and easier to detect. Now, Ross 128 b is going to draw the attention of several more telescopes and teams studying it with the objective of finding if does, or doesn’t, have an atmosphere.

The presence of atmosphere can ensure temperature regulation and a possible water cycle, keeping the planet cozy for life. Analysing an exoplanet’s atmosphere can also tell us about the presence of specific gases – each of which can increase or decrease the chances of life.