During 2016, ISRO signed cooperative agreements with the French, Emirati, Japanese, American, Vietnamese, Afghan and Russian space agencies, and the US Geological Survey. 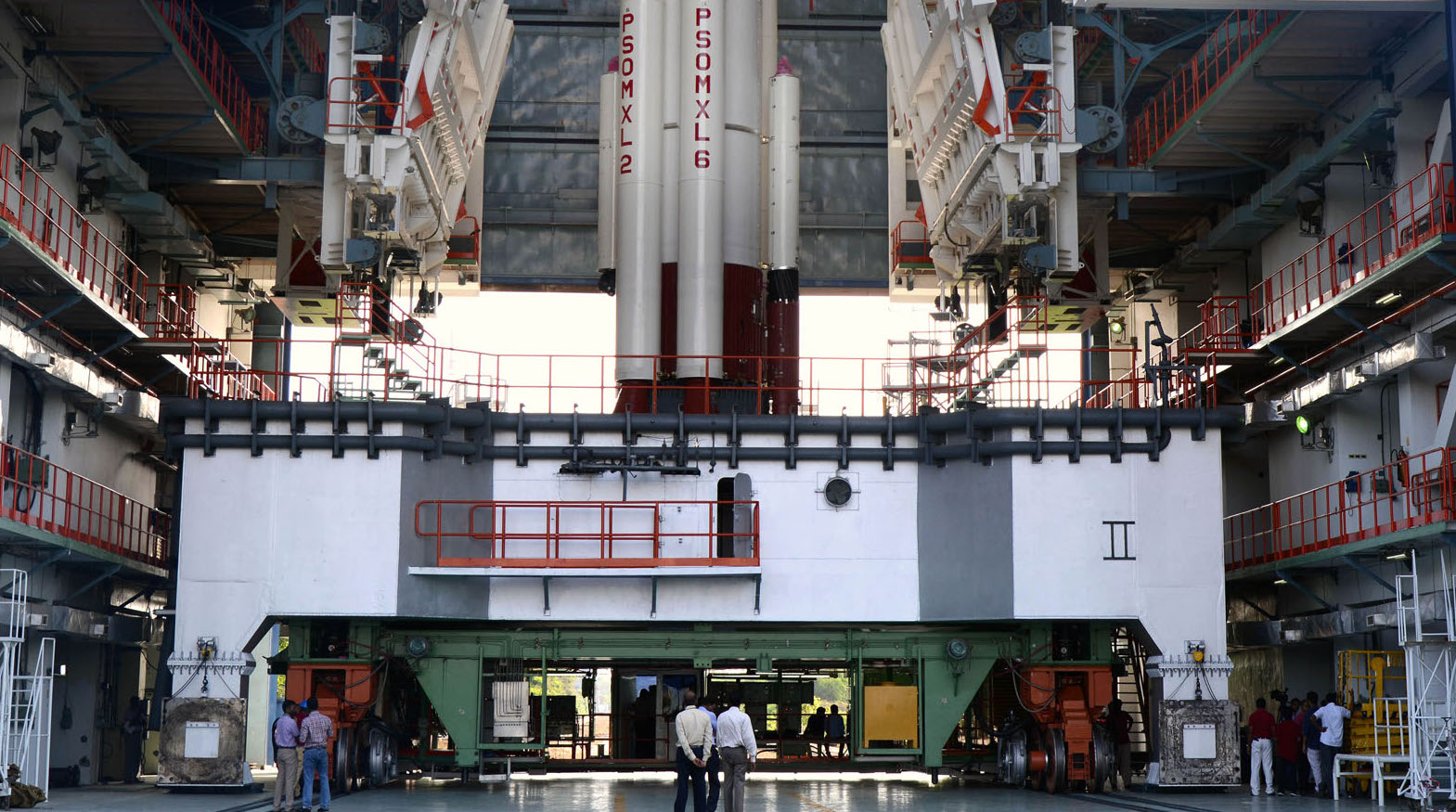 First-stage integration of the PSLV C34 in progress. Credit: ISRO

In the last year, the Indian Space Research Organisation (ISRO) reached multiple milestones. It completed complicated missions, flew two kinds of launchers and tested a new third kind, and successfully completed two years of the Mars Orbiter Mission and one year of AstroSat. Even so, the organisation had also been up to a lot of things that weren’t widely discussed and which have been mentioned in its annual report. The document recounts all of ISRO’s activities in the past year in 135 pages brimming with details. Because recounting all of them will likely be tedious, The Wire has picked the following 20 salient points out (presented verbatim). They were simply bits that stood out, and by no means encompass all that you might find interesting in the full.

1. Successful launch of IRNSS-1F and 1G, the sixth and seventh satellites of the IRNSS Constellation, onboard PSLV-C32 and PSLV-C33 during the year signifies the completion of IRNSS constellation. The year also witnessed the indigenous launch of four earth observation satellites – Cartosat-2 Series Satellite, INSAT-3DR, SCATSAT-1 and Resourcesat-2A. Of these, Cartosat-2 Series Satellite weighing 727 kg was launched by PSLV-C34. India’s weather satellite INSAT-3DR, a follow-on meteorological satellite to INSAT-3D, with a lift-off mass of 2211 kg and equipped with an imager, sounder, Data Relay Transponder and Search & Rescue payloads onboard, was launched by GSLV-F05. The 371 kg SCATSAT-1, carrying a Ku-band scatterometer, was launched onboard PSLV-C35. Resourcesat-2A, the 1,235 kg remote sensing satellite intended for resource survey, was launched by PSLV-C36.

3. Advanced Technology Vehicle (ATV) is a low cost sounding rocket platform for conducting atmospheric experiments as well as provides a cost effective platform for testing the airworthiness of new subsystems, new avionics packages and new technologies before introducing into launch vehicles. ATV-D02 was successfully launched on August 28, 2016 from SDSC carrying twin Scramjet air breathing engines for supersonic combustion experiment. The rocket systems performed as desired by providing peak Mach No.6 and dynamic pressure of 148 KPa conditions for the supersonic combustion.

4. The X-ray Polarimeter Satellite (XPoSat) mission is the first dedicated mission for polarisation studies and was approved in April 2016.

More on Chandrayaan-2 and Aditya

5. The future space science missions of ISRO include Chandrayaan-2, a follow-on mission to Chandrayaan-1 with an Orbiter, Lander and Rover to explore the Moon, which is to be launched onboard GSLV and Aditya-L1, a scientific mission for solar studies carrying five payloads including a Coronagraph. Aditya-L1 is planned to be placed into a halo orbit around the L1 Lagrangian point.

6. Primary structure of Orbiter Craft of the Chandrayaan-2 mission has been realised. Fabrication of panels is in progress. Configuration of mainframe systems and payloads was completed. Integration of mainframe systems including propulsion elements was expected to commence from December 2016. Payloads from various centres are in advanced stages of realisation and expected to be delivered in first quarter of 2017 for integration.

7. The original Aditya – L1 mission was conceived as a small satellite in a ~800km orbit carrying one payload to study solar corona. The mission has been enhanced and termed as Aditya-L1 mission carrying seven payloads, which was approved in 2015. It is scheduled for launch during 2020 timeframe by PSLV-XL.

9. A landslide that occurred in the Kanaka River valley near Mantam in Sikkim in the month of August, 2016, caused blocking of the river flow and a temporary lake formation. Using very high resolution Cartosat-2B data, the spread and volume of the impoundment were estimated and the information was sent to MHA, NDMA, CWC, GSI and Sikkim State Government.

12. During 2016, Indian Mission Control Centres provided search and rescue support to six distress incidents in Indian service area through Indian system and contributed to saving of 34 human lives. About 815 new radio beacons were added in Indian database (most of them for aviation applications).

13. A Web-enabled real-time spatial flood forecast system is developed for the Godavari and Mahanadi Basins. Flood forecast in the Godavari basin is being issued with a lead time of 2 days and flood discharge computation accuracy of more than 87%. The model was successfully implemented during the monsoon period of 2016, in collaboration with CWC and IMD.

14. The performance demonstration test of Crew Escape System (CES) has been planned through Pad Abort Test (PAT) flight. PAT flight demonstrates the capability of CES to execute a ground based abort in case of an exigency at launch pad. In PAT flight, the test article (consisting of CM and CES) with a height of 14 m and lift-off mass of 12.5 t, is propelled at an acceleration of 10 g with the help of quick acting solid motors. Upon reaching a safe altitude and range, the crew module separates and safely lands in sea with the help of parachute based deceleration system.

To enable quick acting, special purpose solid motors with high-burn rate propellant (being developed for the first time) and special features like reverse flow multiple nozzles and canted nozzles with scarfing have been designed and realised. Proof pressure test and propellant casting for motors have been completed. Facilities for vertical testing of solid motors and launch pedestal for PAT flight are being realised at SDSC. Wind tunnel tests for CES configurations have RLV-TD Lift-off Low-altitude Escape Motor Low-altitude Escape Motor 72 been completed. Crew Module (CM) structure required for CES test has been realised and successfully structural tested. The Pad Abort Test is expected to be completed by March 2017.

15. Under commercial contracts with Antrix, 79 international customer satellites have been successfully launched by PSLV during 1999-2016 period. During 2016, PSLV successfully launched 22 satellites from abroad and ISRO signed cooperative agreements with the French, UAE, Japanese, US, Vietnamese, Afghanistan and Russian space agencies as well the US Geological Survey.

16. The total approved sanctioned strength of the department as on March 01, 2016 is 16,902, out of which 12,300 are in Scientific and Technical (S&T) category and 4,602 are under administrative category. There are 1890 Women Employees in the Scientific and Technical categories and 1262 Women Employees in Administrative categories in the Department as per details in Table-IV. They represent 20% of personnel in the Department. 3,742 persons belonging to Other Backward Classes are existing at present. Out of the 3,742 OBCs, 226 were appointed during the year.

17. A team of two scientists from NRSC participated in 35th Indian Scientific Expedition to Antarctica (ISEA) during austral summer of 2015-16. To understand melt/freeze dynamics and its response to microwave remote sensing data, snow properties were observed using GPR (500 MHz in-house developed and 1GHz & 200MHz commercial) and snow fork (density & wetness) near Bharati and Maitri Indian stations. GPR Profiles were collected on sea ice and on ice sheet to measure the thickness.