The launch call-off is likely to precipitate further delays for Chandrayaan 2, which has been pending since at least 2017, because the current launch window expires on July 16. 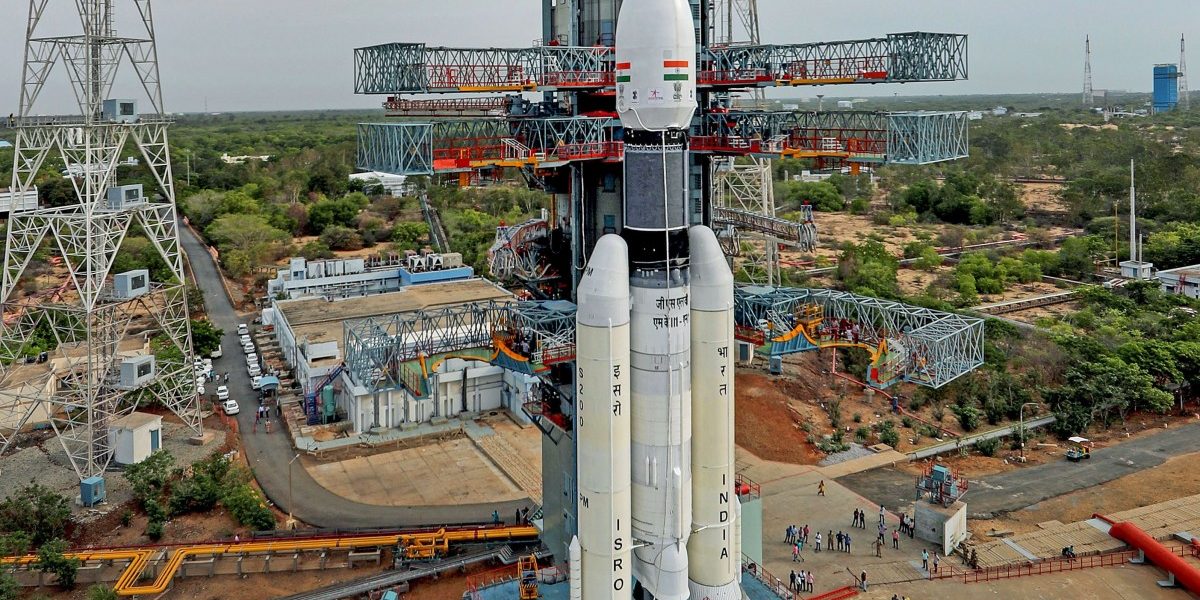 The GSLV MKIII before the planned launch of Chandrayaan 2. Image: ISRO/PTI

The Indian Space Research Organisation (ISRO) postponed the launch of its GSLV Mk III rocket, carrying the Chandrayaan 2 modules, only 56 minutes before liftoff in the early hours of July 15. The order to scrub the launch was issued in an exercise of “abundant caution”, according to ISRO officials, after they detected what they only described as a “technical snag” during the customary pre-flight checks.

Chandrayaan 2 is a modular stack comprising three units: an orbiter, a lander named Vikram and a rover named Pragyan. If the Mk III had lifted off successfully and injected the stack into an elliptical orbit around Earth, the trio would have reached the Moon by September. There, on September 6/7, Vikram would have attempted to perform a soft-landing over the lunar surface and roll Pragyan out. The trio collectively carried a suite of 14 instruments to perform detailed studies of the Moon’s surface, subsurface and atmospheric characteristics.

This event is likely to precipitate further delays for the mission, which has been pending since at least 2017, because the current launch window expires on July 16. Four of those delays have been since only March 2018.

“The technical snag was noticed [when] the cryogenic fuel was being loaded. We have to approach the vehicle to assess the problem,” one unnamed ISRO official told IANS. “First we have to empty the fuel loaded in the rocket, then the rocket will be taken back for further investigation.” Engineers would never hurry this procedure, evidenced by the fact that spokesperson B.R. Guruprasad has confirmed the organisation is giving itself 10 days to resolve the issue.

Effectively, this means ISRO’s Chandrayaan 2 mission to the Moon won’t be happening until later this month, or may even be pushed to August. However, it is notable that two GSLV launches – both of the Mk II variant – have already been scheduled for later this year, carrying the GISAT 1 and 2 satellites. Another Mk II launch is expected to lift the GSAT-32 instrument in February next year. Together with the multiple PSLV missions, any additional delay will mean ISRO will have a hectic launch schedule.

This is only yet another delay in India’s prestigious Moon mission, but unlike the previous occasions, almost all of which were due to technical issues and procedural lapses, the current one is eminently more understandable. Irrespective of how successful ISRO has been with its PSLV rockets, rocket launches have been and will always be extremely complex affairs, each with thousands of opportunities of failure. In the event a fault has been detected, it is always prudent to scrub the launch, examine the problem, resolve it, ensure it is resolved and attempt to launch again.

If this wasn’t stressful enough, the Mk III rocket carrying Chandrayaan 2 was set to lift off in front of a live audience of over 5,000 – a first thanks to ISRO’s new viewing gallery – one of whom was Ram Nath Kovind, the President of India.

In typical fashion, ISRO has not been forthcoming about the actual nature of the problem; however, sources within the organisation said they they what the problem actually was (as the Times of India was subsequently able to verify). An official tweet confirming the scrub had shortly been preceded by an announcement that engineers had finished loading the propellant onto the rocket. The proximity of the two events suggested the snag had something to do with the fuel systems. News24 had previously reported that the problem has to do with a component called a fuel conductor.

The mission to launch Chandrayaan 2, designated M1, is the Mk III rocket’s first operational flight. It has flown one suborbital and two orbital test flights before this, between December 2014 and November 2018. While all of them were successful, only the latter two carried a cryogenic upper stage (CUS). Since the first flight of the GSLV Mk I in April 2001, ISRO has flown 15 missions carrying the CUS, of which two were partial failures and three were complete failures. However, all but one of them occurred with the Mk I rocket, and the one with the first flight of the Mk II, and the latter was due to a turbo-pump malfunction in the CUS.

So considering the GSLVs don’t yet have a long history of successful launches, and especially not the Mk III variant, confidence in the success of a GSLV launch is still nowhere near as high as with the PSLVs. For the Mk III to get there, it has to first successfully complete one operational mission; that mission is the M1, and it is currently on hold.

Much of this tentativeness has to do with the complexity of the cryogenic engine inside the CUS. Cryogenic engines were conceived by NASA in the early days of the Cold War space race to make use of hydrogen as a fuel. Hydrogen has the highest exhaust velocity of all known fuels: 4.55 km/s (with oxygen as oxidiser); to compare, the unsymmetrical dimethylhydrazine used by the Vikas engine onboard a PSLV has an exhaust velocity of 3.42 km/s (with nitrogen tetroxide as oxidiser).

However, hydrogen is a gas and is harder to pump, so engineers first liquefy it and store it at extremely low, or cryogenic, temperatures. And to use it as such, engineers also designed and built special turbo-pumps, valves, engines and other materials, as well as cryogenic systems to allow them to load and unload the fuel from the rocket as necessary. The loading/unloading procedures are tricky because hydrogen reacts violently with oxygen, so even a small leak can wreck the rocket and launchpad.

Then again, the story of Chandrayaan 1, which launched in late-2008, serves as a cautionary tale that the CUS and liquefied hydrogen are not the only headaches ISRO engineers have to deal with. Chandrayaan 1 was launched onboard a PSLV rocket. However, shortly before launch, officials noticed that nitrogen tetroxide had leaked from a fault in the piping and engulfed the rocket in a poisonous smoke. Engineers then scrambled to work through the smoke and fix the fault in time for the launch.

The last GSLV failure was the Mk II mishap, on April 2010, when the rocket failed to reach the geostationary transfer orbit to inject the GSAT-4 satellite. According to the official failure report, “The thrust build up did not progress as expected due to non-availability of liquid hydrogen supply to the thrust chamber of the main engine,” which in turn was the result of the fuel-booster turbo-pump unexpectedly shutting down 1.5 seconds after it came on.