In the West, experts tracking space matters disagree with the sanguine Indian reading about the fate of the ASAT test debris. 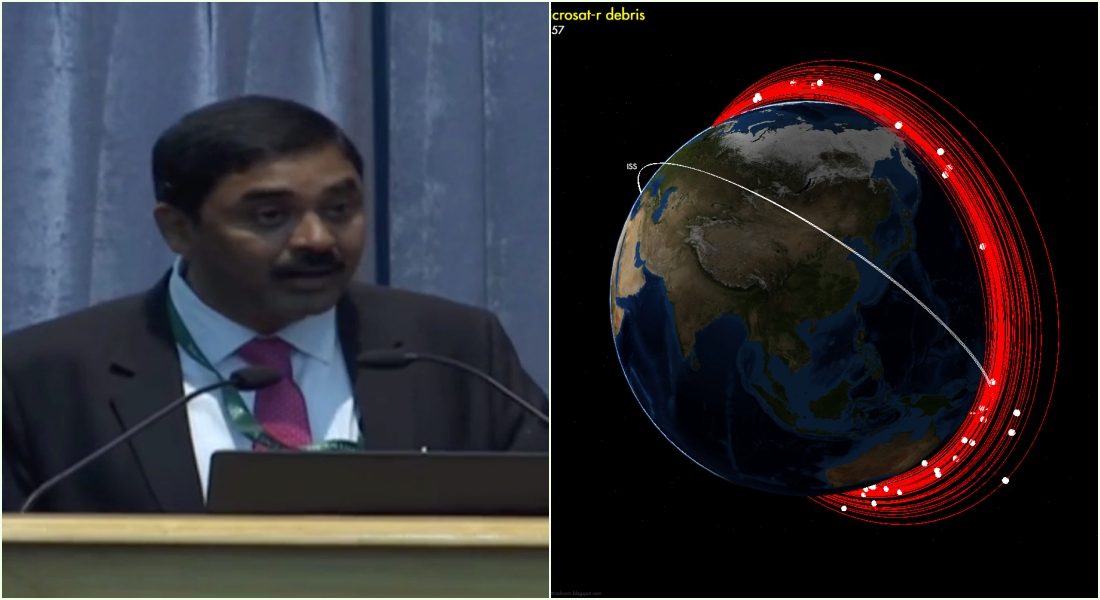 DRDO director G. Sateesh Reddy at his press conference in Delhi on April 6, 2019.

New Delhi: Against the backdrop of rising criticism from space scientists, including the NASA director, that the Indian anti-satellite (ASAT) test last month had generated debris which is a menace in space, India fielded its top defence scientist to clear the air and provide more information about the mission.

In a press conference on Saturday, Satheesh Reddy, chairman of the Defence Research and Development Organisation (DRDO), disclosed further technical details of Mission Shakti, conducted on March 27, saying that it had been carefully planned to minimise the amount of debris generated.

NASA chief James Bridenstine provided the principal indictment against the debris problem on April 2, when he said Mission Shakti represented the “kind of activity [that] is not compatible with the future of human spaceflight.” But both Reddy and Pankaj Saran, the deputy NSA, dismissed Bridenstine’s concerns and sided instead with more favourable comments from the US Department of State and the Pentagon.

However, recent reports indicate that some pieces of debris have climbed up to almost 2,000 km – the upper reach of the low-Earth orbit – potentially endangering other satellites. In an interview to Breaking Defense, Jonathan McDowell, an astrophysicist at the Harvard-Smithsonian Center for Astrophysics, Massachusetts, ridiculed official Indian claims about the debris not posing a threat to space:

We already have 15-16 objects with apogees about 1,000km, and that alone is really bad. It also shows that the Indian government’s claim that the debris is not a problem is nonsense. 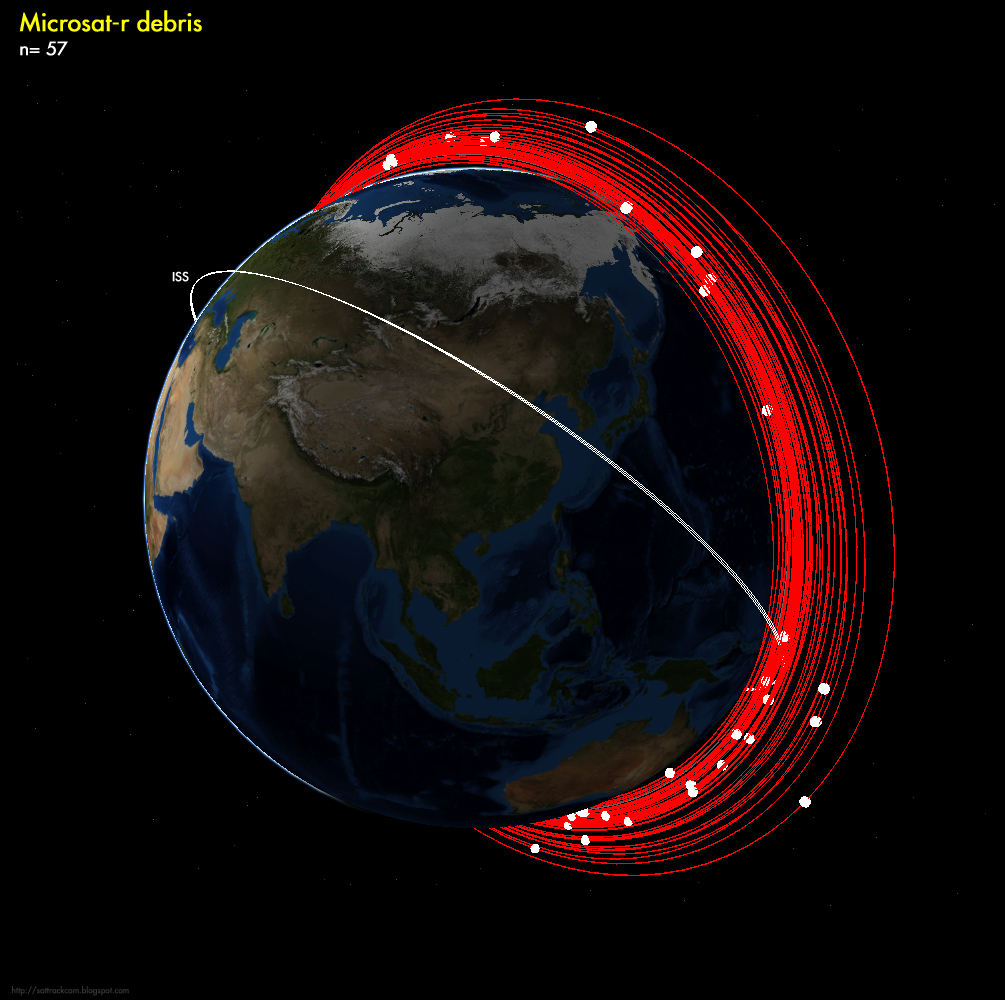 “The image above plots the orbit of the 57 debris fragments, in red. The white orbit is the orbit of the International Space Station ISS, as a reference.” Credit: Marco Langbroek, (https://sattrackcam.blogspot.com)

Providing technical details of the Indian test, Reddy said the primary mission was to neutralise a satellite in low-Earth orbit using an interceptor missile launched from the ground and completed quickly, from start to finish. He added – though not in as many words – that Mission Shakti would also showcase the DRDO’s ability to execute such complex missions.

With this as the goal, a video shown at the briefing claimed that the ASAT programme was seeded in 2014. After this, Ajit Doval, the National Security Advisor (NSA), supposedly worked with DRDO officials and scientists and helped finalised a plan by 2016, and brought a multistage interceptor to the flight-test stage in two years.

These claims are at odds with those of V.K. Saraswat, a former DRDO chief who claimed that the organisation was ready to go on an ASAT test as far back as 2012. But in Reddy’s version, some ASAT technologies were ready as part of India’s Ballistic Missile Defence programme, and that the final green-light was given after presentations were made to the “highest office” in 2016.

Reddy claimed that the test had been planned with “extensive simulations” beforehand. He also confirmed that the DRDO had conducted a “first” test on February 12, 2019, during which an ASAT missile was tested “against an electronic target” and the outcomes of which informed the March 27 test.

According to him,  the head-on collision – between the ASAT missile and the satellite that was hit – was designed to ensure debris wouldn’t be a concern. The simulations had also shown that the International Space Station wouldn’t be struck by debris from the test. Third, he insisted that those pieces that had been knocked out of the satellite’s original plane of orbit will have a low velocity and float back down without causing further harm, although he also acknowledged that India didn’t have the data on it.

In the West, however, experts tracking space matters disagree with the sanguine Indian reading about the fate of the ASAT test debris.

Sharing our simulation talent: the recent #MissionShakti ASAT test. Debris was generated across a range of altitudes that could pose a hazard to low earth orbit satellites in coming weeks. U.S. Air Force is currently tracking 270 pieces of debris. Stay tuned for more analysis… pic.twitter.com/8EMFN3mR2E

Marco Langbroek, a satellite tracker who has plotted the Indian debris in what is called a Gabbard diagram noted that “it is well visible that a large number of the 57 fragments (80% actually) have apogee altitudes above the orbit of the ISS, well into the altitude range of operational satellites. … The highest apogee amongst the 57 debris pieces is that of 2019-006AR at 2,248 km.”

1/2
Gabbard diagram for the 57 pieces of debris from the Indian #ASAT test catalogued so far. Apogee’s up to ~2250 km, 46 pieces (80% of this catalogued larger debris) above ISS altitude:@SSC_NL @Genevaexpat @nktpnd @planet4589 @cosmos4u pic.twitter.com/ksvZCdPMun

Private satellite operators in the West are among those worried about the Indian debris, said Breaking Defense:

“One industry representative says that a number of satellite companies are likely to be “watching their conjunction notices closely” over the next several weeks. Conjunction notices are the first-level warnings provided by the 18th Space Control Squadron to operators when the system for space object monitoring shows a possibility of two objects getting too close together, and thus potentially colliding. More urgent collision warnings are provided when there is a greater probability of two objects smashing into each other.”

In response to questions, Reddy said that even if some debris went to a higher level, they would decay fast and thus not pose a threat.

The DRDO views the ASAT missile as a new form of deterrence, particularly in light of the increasing centrality of space and space-based assets in military decision-making. During the interaction, Reddy himself did not dispute or otherwise discourage characterising the ASAT weapon as a military asset, and said that it could be “useful” in defence.

The ASAT missile is a three-stage rocket weighing 19 tonnes and standing 13 m high. It has a range of up to 1,000 km, a span that encompasses the orbits of most low-Earth orbit satellites. Reddy claimed that the test itself had been conducted to intercept a satellite at about 280 km to minimise the debris threat. The missile can target satellites travelling at over 7.5 km/s (with relative velocities around 10 km/s for satellites in low-Earth orbit). Because of the high precision and control demand, Reddy said that the entire operation – identifying the satellite, launching the missile and tracking and destroying it – was automated.

Critical technology deployed during the test included guidance and control algorithms for a precision hit, an infrared seeker, an advanced divert-and-attitude control system for very fast response and a ring-laser gyro navigation system. Finally, he said that the hit-to-kill precision had an accuracy of less than 10 cm from the satellite’s geometric centre.

Reddy also explained that Mission Shakti had the participation of over 50 industry players who provided over 2,000 systems and subsystems for the test. About 90% of the components, he said, were indigenous, together with all of the systems.

The briefing is available to view here.