Dhaka Dispatch: What the Student Protests Mean for Bangladesh

"Bangabandhu [Sheikh Mujibur Rahman] would have beamed with pride at the passion and idealism of Bangladesh’s student community,” a neighbour told me.

I reached out for my copy of Willem Van Schendel’s A History of Bangladesh on Wednesday last week, almost two weeks after the beginning of the student-led protests against unauthorised vehicles and unlicensed drivers on the roads of Dhaka and other parts of Bangladesh. As I tried to make sense of what brought the anger of these seemingly apolitical teenagers to a boiling point, I was also left confused by why  the protests were not making substantial news internationally, especially in South Asia outside Bangladesh. As I still waited to understand why there was little international concern about what was happening in Dhaka, I realised that it was an issue that concerned everyone in Bangladesh – almost every household has children, and safer roads cannot possibly be an exceptional demand. I continue being a bit lost because I am having to relay what the street-side view of Dhaka is to friends and family back home in India, some even less than an hour away.

At a first glance, the issue seemed quite straightforward: on July 29, 2018, after two school children from the Shaheed Romijuddin Cantonment College were killed and 12 others injured when a speeding bus mounted a footpath, hundreds of schoolchildren took to the streets. These children (mostly between ages 13 and 19), often in school uniforms, were seen demanding justice, improved road safety and immediate removal of unauthorised vehicles and unlicensed drivers from the roads of Dhaka.

The National Committee to Protect Shipping, Roads and Railways (NCPSRR), a non-government organisation, estimates that about 4,284 people were killed in road accidents in Bangladesh in 2017. However, the Bangladesh Passengers Welfare Association (BPWA) in its annual report has put out a figure of 7,397 people killed during 2017. Notwithstanding the wide variation in the numbers cited, both reports underline the massive number of causalities and public anger has been on the rise for a number of months. 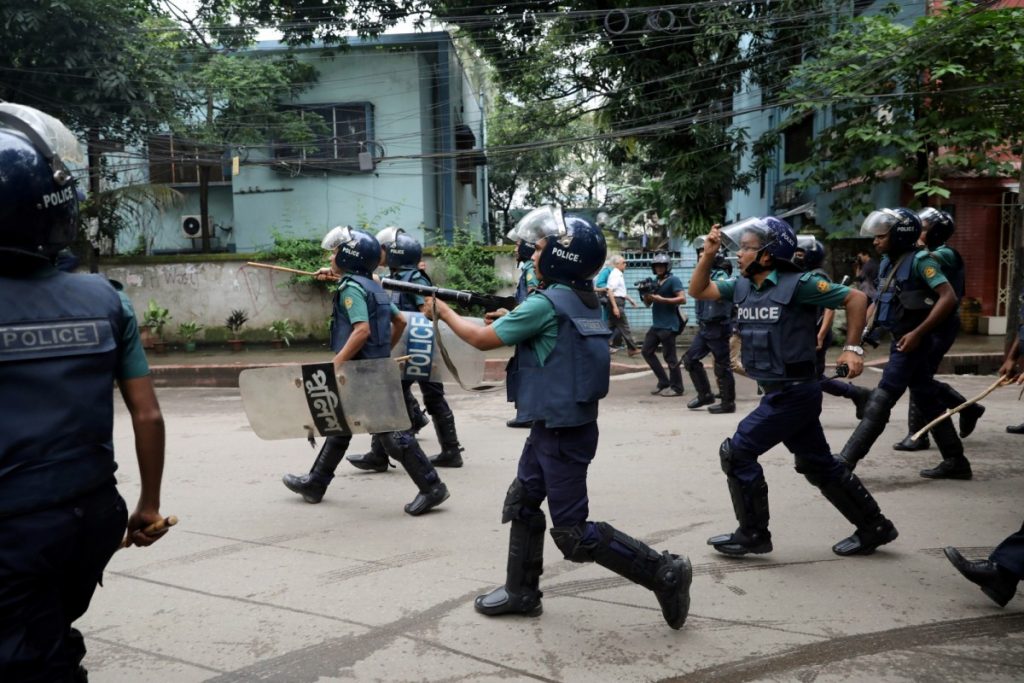 A seemingly non-partisan, simple and clear demand was emerging out of that incident – one that would be difficult to deny, by any stretch. It is difficult then, to fathom the reasons why almost all of Dhaka halted last week or how vigilante forces managed to get way with violence against these young students. As an outsider, believing that this too is ‘home’, I cannot help but wonder when violence and arson ended up within that precept of civil engagement. Set against the backdrop of an election year in Bangladesh, various political factions seem to be using this protest as an opportunity to sway public opinion and groundswell.

My work takes me to territorial waters of the Bay of Bengal, the resources of which are shared by people in India, Bangladesh, Myanmar and Sri Lanka, from way before these countries, and the various identities therein, were born. I work in a field that is too science-based to be political or religious. So, for me, neutrality in observation comes with a sense of shared history and space. Schendel’s book has served me well during the first few times in Dhaka with its broad introduction to the social, economic and political landscape of Bangladesh. It has managed to explain to some extent what I had so far not been able to understand about Bangladesh: this young country is powered by the idealism of the youth. And in its short history, the country has seen political narratives that have time and again been shaped by young minds. The students’ protests, therefore, were not isolated events. Although the trigger this time was the deaths and injuries of the students they were in continuum with the larger political narrative of the country.

In 1948, when the then Pakistani government ordained Urdu as the sole national language, sparking extensive protests among the Bengali-speaking majority of East Bengal, it was the students of the University of Dhaka who led the movement against it. When the police resorted to violence against those students, it stoked an entire region into civil unrest. The famous ‘michhil’ (protest march) of February 21, 1952 (now international mother language day) was also taken out by young students from across Dhaka’s colleges and schools. The conflict finally ended in 1956 when the central government relented and granted official status to the Bengali language. It is, in fact, the language movement that catalysed the Bengali nationalist movement and later the Liberation War of 1971. The first version of the Bangladeshi flag Bangladesh was created by a section of student leaders of the Shadheen Bangla Nucleus on June 6, 1970, in room 108 of Iqbal Hall (now Sergeant Zahurul Haq Hall) at the historic Dhaka University.

This is a country where the Prime Minister, Sheikh Hasina, prides herself to have started out as a young student leader at Eden Girl’s College in Dhaka long before she came to the forefront of the Awami League and national politics with a belief system firmly rooted in the overall development of Bangladesh. This is a country that has enjoyed stable economic growth of over six percent since 2008 and has recently fulfilled the eligibility criteria to be recognized as a developing country, crossing over from the list of least developed countries (LDCs). It would perhaps be safe to say that the historical continuity of change is guided by a grassroots ideology driven by the youth of Bangladesh.

The protests themselves, the length of time that they have lasted and the subsequent violence all seems like an overreaction to a very simple demand. The city of Dhaka was literally shut down, and a subtext of fear and extended civil unrest has continued since. A friend who works for an aid agency here remarked that there are way too many police personnel on the streets for anyone to feel completely safe, taking him back to the July 2016 terrorist attack at the Holey Artisan bakery in Dhaka. Dhaka changed overnight that fateful day and has never been the same again, the friend said. 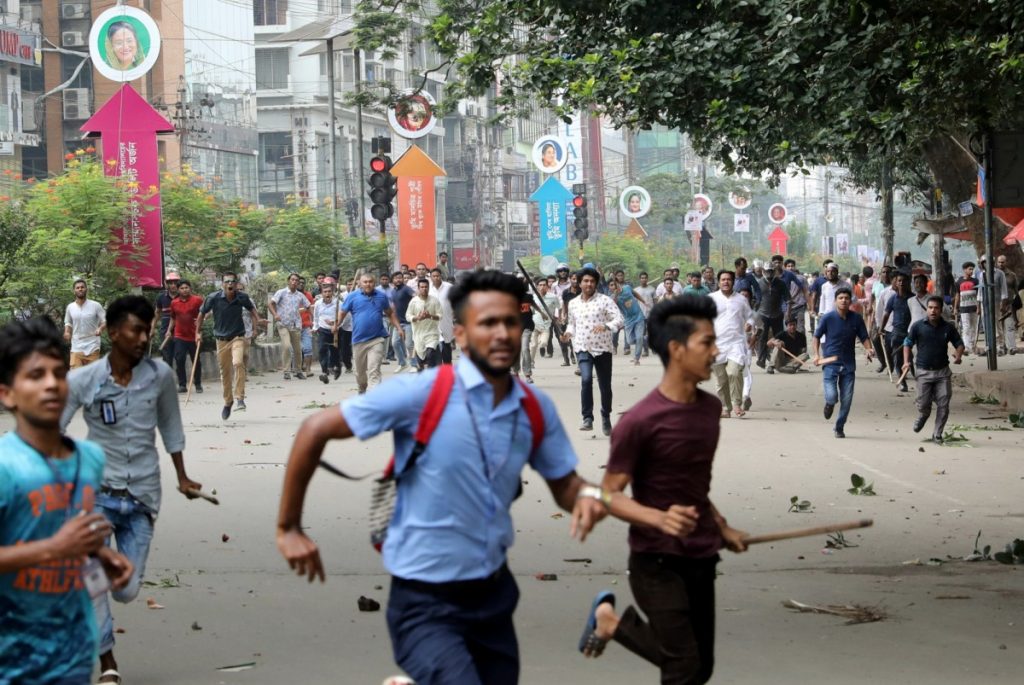 And then, in a sudden shift, on Thursday morning, I found myself driving in a Dhaka that felt eerily normal. Is that just how the anatomy of a protest works? I am not sure whether to be convinced this sudden calm is a good thing. Not just yet. In a situation like this, there are perhaps no clear answers and no unidimensional ways of thinking through solutions; not when a U.S. embassy vehicle comes under attack, not when an internationally renowned photographer is arrested, not when the United Nations is requested to withdraw its statement about the issue at hand, not when social media is full of reports one does not quite know how to process, and definitely not when electricity and internet services continue to be peculiarly shaky.

I keep thinking that, like the rest of the recorded history in Schendel’s A History of Bangladesh, this too seems like the emergence of what may perhaps, years from now, be described as a new narrative in this context.

I was carrying the book in the lift that evening. A rather friendly neighbour, who has lived through the last 50 years of subcontinental history, looked at me and then at the book. He asked politely whether I had finished reading it, to which I replied I was trying to but that it was difficult to read stuck in a regular Dhaka traffic jam for two hours.

He smiled and said, “Bangabandhu [Sheikh Mujibur Rahman] would have been saddened by the road accident statistics and would have definitely hated the traffic jam you’ve been in had he been alive today. But he would have beamed with pride at the passion and idealism of Bangladesh’s student community.”

Neha Simlai is an international consultant on environmental sustainability and conservation. A graduate of the Lee Kuan Yew School of Public Policy (Singapore), she has worked across South and South East Asia and writes about development sector opportunities and changes. Views are personal.