Why Pakistan Government Is Evicting People From its Karachi Housing Facilities

The problem of a housing shortage for serving employees is acute in Karachi where there are 47,000 federal government employees but the Estate Office has only 8,000 housing units. 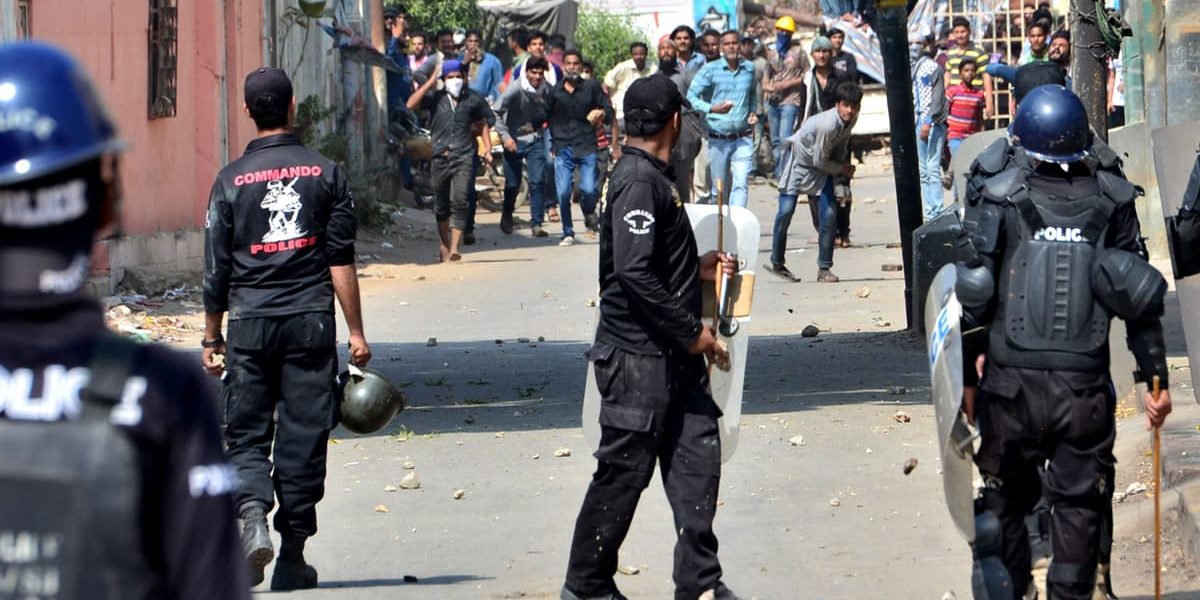 For more than 35 years, he worked with the federal ministry of housing and works. Now, 15 years after his retirement, he is unsure if he will ever have a house of his own. His last posting was at the Estate Office, one that looks after all the federal government’s housing facilities for its own employees in Karachi. This very office has now put him on a notice to vacate a residence where he has been living for the last five decades.

Shah lives in Martin Quarters, a rundown residential neighbourhood burrowed between central jail and Lyari Expressway. A nearby housing facility, located between Nishtar Road and Lyari Expressway, is called Pakistan Quarters. Several other similar neighbourhoods can be found on Clayton Road and Jahangir Road as well as in Patel Para and Old Lalu Khet areas. There are around 3,000 housing units in all of them and they occupy a total of 273 acres of land in Karachi’s East and Central districts.

They have their origin in Pakistan’s own origin.

As the federal capital at the time of the independence, Karachi suffered from a severe housing shortage. To address the problem, the government built a number of ‘quarters’ – small residential units – between 1948 and 1952. They were meant as a temporary arrangement to house the government’s employees who had migrated to Pakistan from different parts of present-day India.

Many of them have been passed on to the children and grandchildren of their original occupants. Retirees live in many others. Together, these two sets of people occupy 2,000 housing units, according to Mohammad Habib Jalib, secretary of the Pak Distressed Employees Association that works for the rights of the residents of these quarters. Another 300 houses have been sold, he says.

In official parlance, these 2,300 quarters are in the possession of ineligible occupants.

Complaints about them have been making rounds in various state institutions, including the courts, since the 1970s. On July 31 this year, the Supreme Court ruled during the hearing of a human rights petition that the eligible occupants of the quarters must prove their eligibility and the others must vacate them. 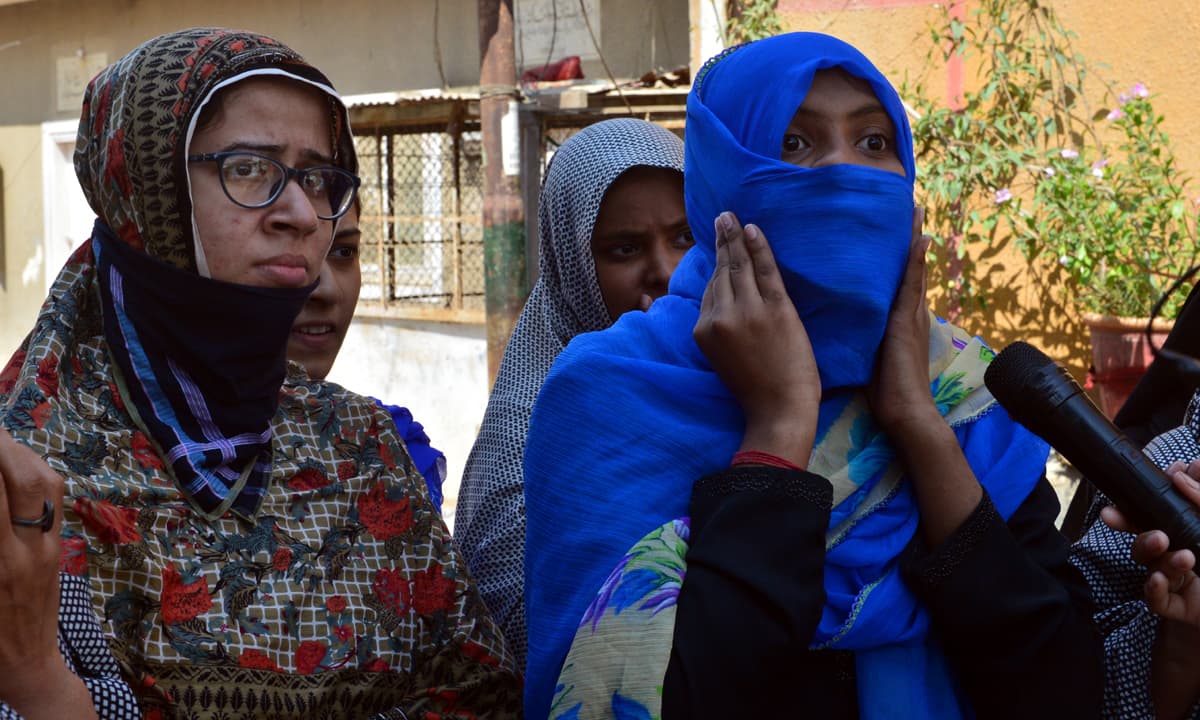 The Estate Office subsequently issued multiple notices to each ineligible occupant. It has also warned them through newspaper advertisements that they could be forcibly evicted if they fail to comply with the court orders to leave.

When these notices and warnings did not work, the Estate Office launched an eviction drive in Pakistan Quarters – first in July and then in October this year. Officials, accompanied by large contingents of law enforcement agencies, told the illegal occupants to leave their residences. They met stiff resistance on both occasions.

Obaid Uddin, who heads the Estate Office in Islamabad, is adamant that the drive will continue. All the illegal occupants of Pakistan Quarters will be ousted by the end of December 2018, he says. Though he does not give a final date of eviction for those living in other facilities, he insists that they, too, will have to vacate their residences soon.

The first eviction notices were issued in 1972.

Some retired employees who received those notices approached Zulfikar Ali Bhutto who, at the time, was the president of Pakistan. They asked him to give them ownership rights of the quarters. On May 2, 1972, Bhutto approved a proposal for the construction of “decent multi-storied buildings” for serving and retired employees on the same premises where the government quarters stand.

The plan never materialised. No one was evicted though.

Seven years later, the retired residents received another round of eviction notices. Now they approached the Sindh high court, seeking withdrawal of the notices. The court ruled that the matter did not warrant its interference. The retirees filed an appeal before the Supreme Court which ordered the federal housing ministry on February 15, 1984, to present their plea to the government for considering it “on merit”.

After receiving the court order, the housing ministry sought the opinion of the law ministry on how to proceed. On July 29 the same year, the law ministry stated that the Supreme Court, or any other authority in the country, had not set aside the president’s order issued in 1972. The Estate Office in Karachi, therefore, was bound to follow up on that order.

The housing ministry suspended the eviction notices and set up a board with the mandate to prepare a feasibility report for the construction of multi-storied residential buildings, as per Bhutto’s orders. The report, submitted to the ministry in April 1988, proposed the construction of 7,904 housing units – including 906 for retired government servants. The construction, to be completed in four years, was estimated to cost 1.08 billion rupees.

This proposal, too, was never implemented. The housing ministry did not have money to spend on it.

By that time, some squatters had built temporary dwellings, or katchi abadis, on open spaces such as parks and playgrounds within the same neighbourhoods where the quarters are located. In the 1980s, the federal government handed over the control of 36 acres of land on which these katchi abadis stood to the Sindh Katchi Abadi Authority. In an ironic development, the squatter dwellings were later legalised as rightfully belonging to their occupants.

Serving and retired government employees, on the other hand, still did not get ownership of their quarters.

On September 15, 1989, the federal cabinet once again decided that they be given ownership rights. On April 5, 1991, the National Assembly’s deputy speaker, federal housing minister and a couple of senators made the same announcement in a joint press conference. In 2007-08, the ministry of housing sent certificates to those who were deemed eligible to become the owners of their quarters.

Shah was ecstatic as he received the certificate. “When the Estate Office issued me the certificate of eligibility in 2007, I became confident that no one could now deprive me of my residence,” he says. 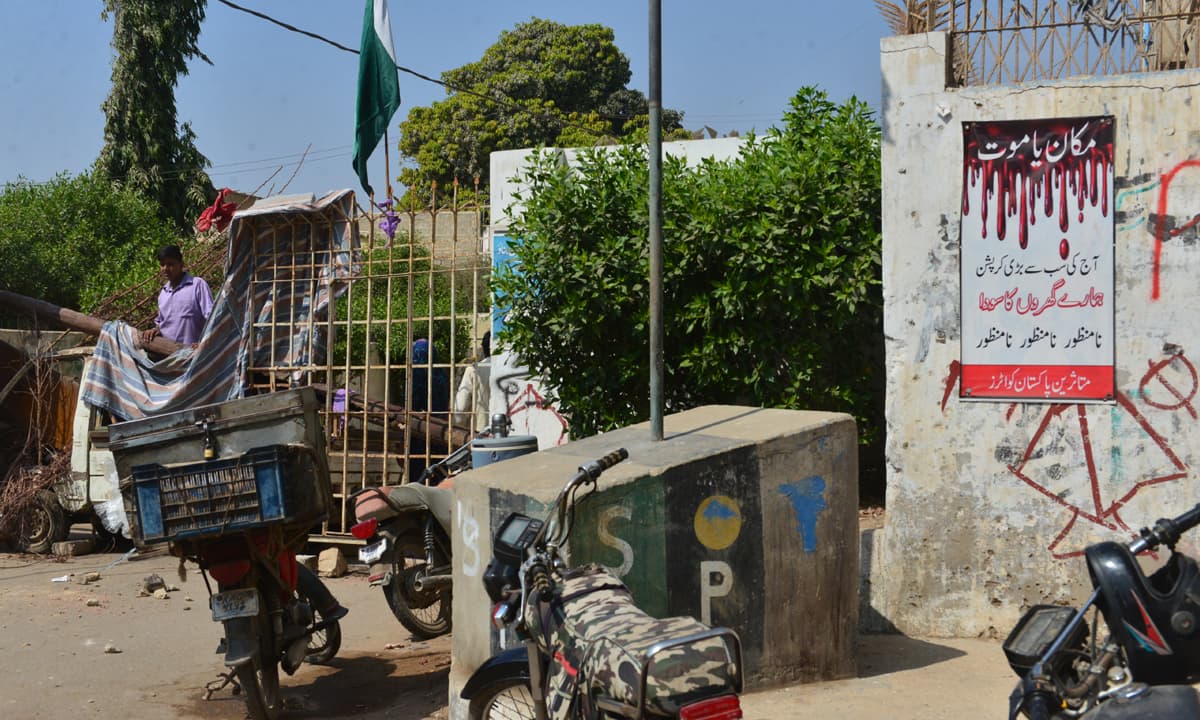 A protest poster on a wall in Pakistan Quarters. Credit: Faysal Mujeeb/White Star

Wazeeuddin, 72, retired from the Pakistan Military Accounts department in 1995. He and his wife live all by themselves in Martin Quarters. They have no one to take care of them. “I cannot afford to even rent, let alone buy, a house in case the government takes away my quarter,” he says.

Wazeeuddin spent thousands of rupees on his residence after the government’s 1991 announcement. Many other occupants have similarly spent large sums of money on repairing and renovating their houses. They were convinced that they will never be evicted.

The maintenance, on paper, is the responsibility of the federal government’s Pakistan Public Works Department but, since the early 1980s, it has stopped doing that. The Estate Office argues that there is no money available for maintenance because the unauthorised occupants of the quarters neither pay any repairing and renovation costs nor the rent due to them. They owe more than 3.5 billion rupees in outstanding rent alone, says Obaid Uddin.

Jalib contradicts this claim. He says retirees and heirs of deceased government servants regularly deposit 11.25 per cent of their basic pay/pension as monthly rent at the State Bank of Pakistan.

In most cases, this amounts to a few hundred rupees each month. The Estate Office, therefore, does not treat it as the “due” rent. In 2002, it stated that the rent of each quarter would be determined based on its area — a formula that Jalib and his association do not accept.

Some retired employees suggest a compromise. They are ready to pay for the land of their quarters provided it is reasonable and is to be paid in installments, says Syed Muhammad Shakeel Ashraf, a representative of the retirees. “We will put up fierce resistance if we are forced to vacate our houses,” he says.

Obaid Uddin remains firm. Ineligible occupants will have to vacate the quarters, he says. There is no other option.

The problem of a housing shortage for serving employees is already acute in Karachi. There are 47,000 federal government employees in the city but the Estate Office has only 8,000 housing units – half of which are occupied by retired officials or the families of deceased ones. The government has already acquired rented accommodations for as many as 14,000 employees at an annual cost of 1.5 billion rupees, Obaid Uddin says.

Moosa Kaleem is a staffer at the Herald.

This article was published in the Herald‘s December 2018 issue. Read the original article here.