When Your Backyard Snakes Turn Around to Bite You

For attacks like the one on Wednesday to stop, the Pakistani state – the elected government and the security agencies – must adopt a multi-pronged, zero tolerance policy towards takfirism, hate-speech and militants. 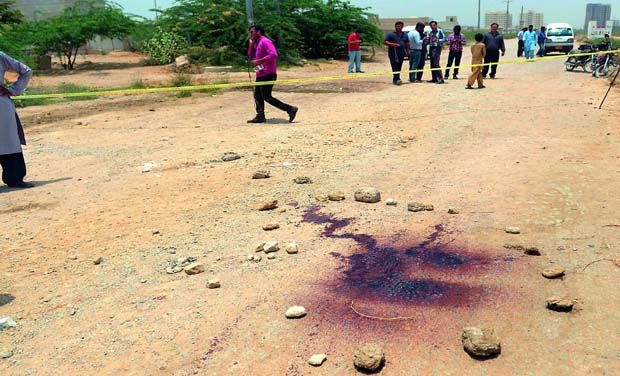 Wednesday’s targeted attack in Karachi on a bus full of Ismaili Shia Muslim families, killing 45 of the 60 passengers, is one in a long line of such incidents in Pakistan. This sub-community has been targeted in Pakistan before, in the northern areas where more than half of the Ismailis live, but never ever in the country’s financial hub where they have a huge and historic stake, including several charitable institutions that serve the larger community beyond their own.

The recent carnage had echoes of the 2012 attacks in the north-west when, on more than one occasion, men wearing uniforms of security personnel stopped buses plying between Islamabad and Gilgit, and shot dead passengers after identifying them as Shia.

The six Karachi gunmen had done a thorough reconnaissance of the times and routes of the pink community shuttle which transports Ismailis from a gated community to their Jamat Khana (religious centre) at Ayesha Manzil in Gulberg Town, a solidly middle class area in northern Karachi. For security reasons, the bus lets no one on or off along the way. But the assailants were in police uniforms, which is presumably why the driver stopped when they waved it down at Safoora Chowk 13 km from Ayesha Manzil. Four of the attackers boarded it and opened fire with handguns, shooting many victims in the head.

“One of them shouted, ‘kill them all!’ Then they started indiscriminately firing,” said a survivor.

They also killed the bus driver. A wounded passenger drove the bloodied bus, nearly two thirds of its passengers already dead, to a nearby hospital.

“I saw this coming,” says Karim Karimbhai, a medical doctor from the Ismaili community whose grandfather Amirali Fancy is considered one of Pakistan’s founding fathers. “I wondered when it would happen.”

The latest attack stems from a trajectory traceable to the 1980s since the first Afghan war. America, Saudi Arabia and Pakistan – then under the military dictatorship of General Zia-ul Haq – partnered to produce the ‘mujahideen’ or Muslim holy warriors to fight the Soviets in Afghanistan.

The militants they cultivated imbibed a ‘Takfiri’ ideology (terming other Muslims as non-Muslims or apostates) stemming from an extremist Wahabi mindset. It was then that slogans terming Shia Muslims as infidels — “Kafir Kafir, Shia Kafir” — first began appearing as graffiti on public transport and walls.

One of the side-benefits of these fighters, as Pakistan’s security establishment saw it, was their alignment with insurgents in Indian-administered Kashmir, a disputed territory that Pakistan claims. Plus they provided Pakistan with “strategic depth” in Afghanistan on the western border.

But as Hillary Clinton famously said in October 2011, “You can’t keep snakes in your backyard and expect them only to bite your neighbours.”

After the war, the mujahideen morphed into the Taliban that filled the power vacuum in Afghanistan in the 1990s. Saudi petrodollars continued to finance religious seminaries or madrassahs in Pakistan, churning out indoctrinated cadres that militant groups find easy to scoop up.

Meanwhile, the Taliban and Pakistan’s homegrown ‘jihadis’ (holy warriors) splintered into a multi-headed Hydra. One offshoot is Jundullah that claimed responsibility for Wednesday’s carnage. Linked to the Pakistani Taliban, in November Jundullah pledged allegiance to the Islamic State of Iraq and the Levant (IS), as several splinter groups have done.

Jundullah also claimed to be behind the ambush shooting of Debra Lobo, an American married to a Pakistani. The mother of two, who was vice principal at a medical school and had lived in Karachi for 25 years, survived her injuries. Leaflets claimed that the attack was carried out on behalf of IS.

Jundullah and the Taliban have also claimed responsibility for the latest attack. Urdu and English pamphlets left on the Ismaili bus purportedly issued by a group calling itself the Daulatul Islamiyya Baaqiya claim the “Advent of the Islamic State,” promise more such acts, and blame Shias for “barbaric atrocities… in the Levant, Iraq and Yemen”.

Blowback from the Gulf has been expected since Pakistani lawmakers took an unprecedented stand against Saudi Arabia’s demand for ground troops and aircraft for the war against Shia Houthi rebels in Yemen. Parliament on April 10 unanimously voted to stay out of the war, angering the six-nation Arab Gulf Cooperation Council (GCC) that Pakistan is financially indebted to. Wednesday’s tragedy is not the first or the worst attack on Shias in Karachi, although it was the first time that the Ismaili Shias sub-sect was so targeted in Pakistan’s largest city.

Security agencies have consistently allowed extremist groups to flourish in the city for one reason or another. From expanding jihad to cutting down their own political creation, the Muttahida Qaumi Movement (MQM), religio-militant forces have many uses. Para-military forces now seem to be focusing on cutting the MQM down to size when they should be doing more to curb hate speech and the activities of known extremist groups in the city, including those believed to have links with Al Qaeda, as the well known defence analyst Ayesha Siddiqa points out.

She says that more than the MQM, security forces need to act against the religio-political parties like Jamiat-Ulema Islam of Fazlur Rehman, JUI-F, that JUI-F, which has 15 seats in Pakistan’s parliament. “Militants know how to hide behind the JUI-F, a major umbrella for them,” she says.

Such religio-political parties also provide the narrative that justifies attacks on Pakistan’s minority and non-mainstream Muslim communities. The list of such incidents is a long one and includes the bombing of a predominantly Shia apartment complex in Karachi’s Abbas Town in March 2013. The virulently anti-Shia Lashkar-e-Jhangvi (LeJ) claimed responsibility for the bombing that claimed over 50 lives.

LeJ emerged in 1996 when its leadership split from the Anjuman-e-Sipah-e-Sahaba (ASS, later re-named Sipah-e-Sahaba Pakistan, SSP). LeJ frequently targets Shias, including Shia Hazaras, an ethnic minority originating in Afghanistan, also persecuted by the Taliban. They attack buses carrying Shia Hazaras as well as Shia localities in Balochistan, besides targeting Shia professionals, particularly doctors, in Karachi and other cities. LeJ was also involved in the murder of American journalist Daniel Pearl in 2002.

The many freelance militants now operating in Pakistan may have their distinctions and differences but they agree that Shias are ‘kafir’ along with Ahmadis. Pakistan’s Second Amendment of 1974, the country’s first ‘takfiri’ piece of legislation, constitutionally declared Ahmadis as non-Muslim.

The militants also share a common goal, to establish an “Islamic state” along the lines of the Taliban’s in Afghanistan – similar to Saudi Arabia in terms of how women and minorities are treated and transgressions punished.

After Pakistan’s security establishment began selectively targeting militant groups over the last decade or so, the militants turned against the state, attacking high profile symbols– a police academy, naval and air force bases, a mosque in an army cantonment, to name some.

The Pakistani Taliban claimed the massacre of nearly 150 school children and teachers at an army public school in Peshawar on December 16, 2014 in retaliation for the army operation against them.

Earlier, both the Taliban and Jundullah claimed the suicide attack of November 3, 2014 at Wagah border, the only road crossing between India and Pakistan and an important trading point between the two countries. The bombing followed the daily flag-lowering ceremony that dozens of spectators attend, killing nearly 60 onlookers on the Pakistan side.

Jundullah also claimed responsibility for the September 2013 suicide bombing of the All Saints’ Church in Peshawar that killed over 120 worshippers attending mass.

The first attack on Ismailis in Karachi in Pakistan’s south comes some four decades after the first attack on the community in the picturesque north-west area of Chitral, Gilgit and Baltistan in the 1980s. The completion of the Karakoram Highway in 1979 by China and Pakistan connected the previously inaccessible region, where over half of Pakistan’s 2.5 million Ismailis live, to mainland Pakistan and China. It also allowed the militants to start making inroads.

Trouble began brewing in the early 1980s. The worst incident took place in 1988, when, following rumours that Shias had massacred Sunni Muslims, thousands of armed tribesmen from the south attacked Shias in Gilgit. The killed nearly 400 Shias and burnt several villages.

The May 13, 2015 attack may well prove to be a game-changer in Pakistan. The Ismailis’ spiritual head, the urbane Prince Karim Aga Khan, is an internationally respected figure who generally keeps a low media profile. Aga Khan foundations and trusts run educational institutes, microfinance, cultural and heritage programmes, charity trusts, maternity homes and hospitals in Pakistan.

Prince Karim’s advice to his community is, “Work, not words” – show the good that you do through your deeds, not by talking about them. His response to the massacre at Safoora Chowk, issued through a press statement, has been characteristically muted.

The Chief of Army Staff cancelled a trip to Sri Lanka to rush to Karachi; the Prime Minister headed over too. They have personally condoled with Prince Karim and other community leaders.

But following this tragedy, as in the aftermath of other such incidents, as public outrage surges, a narrative begins doing the rounds about India’s involvement in the violence. “It is RAW (India’s Research and Analysis Wing) that is behind the attack,” comes the pronouncement from various mouthpieces in the media. But not everyone’s buying it.

If RAW is behind this, and other such carnage in Pakistan, it hardly puts Pakistan’s own security agencies in a very favourable light.

Plus, “how long will we shy away from reality?” asks Karimbhai. What is happening, he says, is “a war, a metastatic cancer coming out of Saudi-funded Wahabiism.”

Pakistan has a democratically elected government, but the security establishment is more fully entrenched than ever before as a political power. In this climate, civil society members feel the pinch as alternative public narratives are countered with allegations of “traitor” and “infidel” perpetuated through mainstream as well as social media.

Many rail at the civilian government’s inefficacy in curbing militancy but Siddiqa urges more nuance, warning against a simplistic approach.

When we criticise the political government especially the Prime Minister let’s not forget that the COAS is an equal partner, if not a bigger actor in this heinous game of violence,” she suggests. “It’s like in a highly patriarchal system when the patriarch imposes a choice on his family, for those in a subordinate position the only option is to adjust with the choice even if they don’t like it. If you want to continue living in the house, you’ll make adjustments to get along at least in public”.

Given that the real power in Pakistan is the army, should India even bother talking to the elected government?

Yes, insist Pakistanis pushing for the democratic political process to continue. India and other countries must not legitimise the military’s role in politics by bypassing the elected government.

“For its protection, India must strengthen its defences,” says Siddiqa. “But I tell my friends in India, you must talk to the government because you don’t really have a choice, and in the hope that the hearts and minds will change some day. Don’t stop talking.”

Turning things around includes re-vamping the education policy, a process that has begun — and is already under attack by the religious right wing. Recently, the respected Pakistani educationist Bernadette Dean, who was implementing changes to the curriculum in Sindh province, was forced to flee the country after receiving threats to her life. The government must move to isolate, arrest, charge and punish those behind these threats and show that it means business when it comes to implementing policy changes and rule of law.

However long it takes and however many bumps – where innocent blood is shed, sadly — there are along the way, Pakistan must stay the course. A continuation of the democratic political process is the only way forward. There are no short cuts and no magic wands.